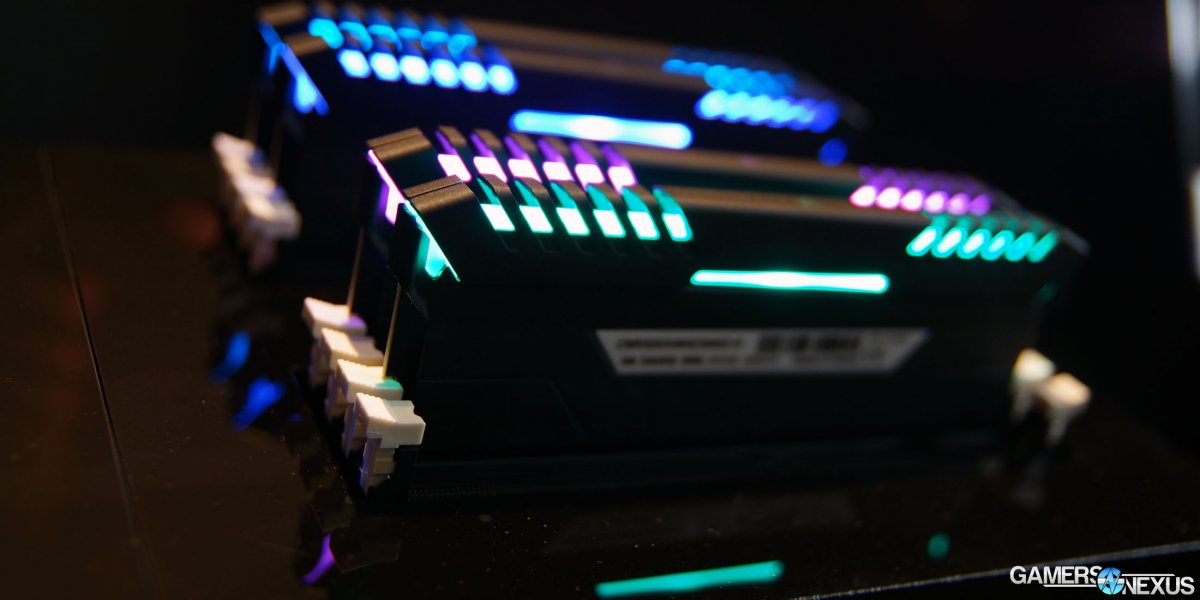 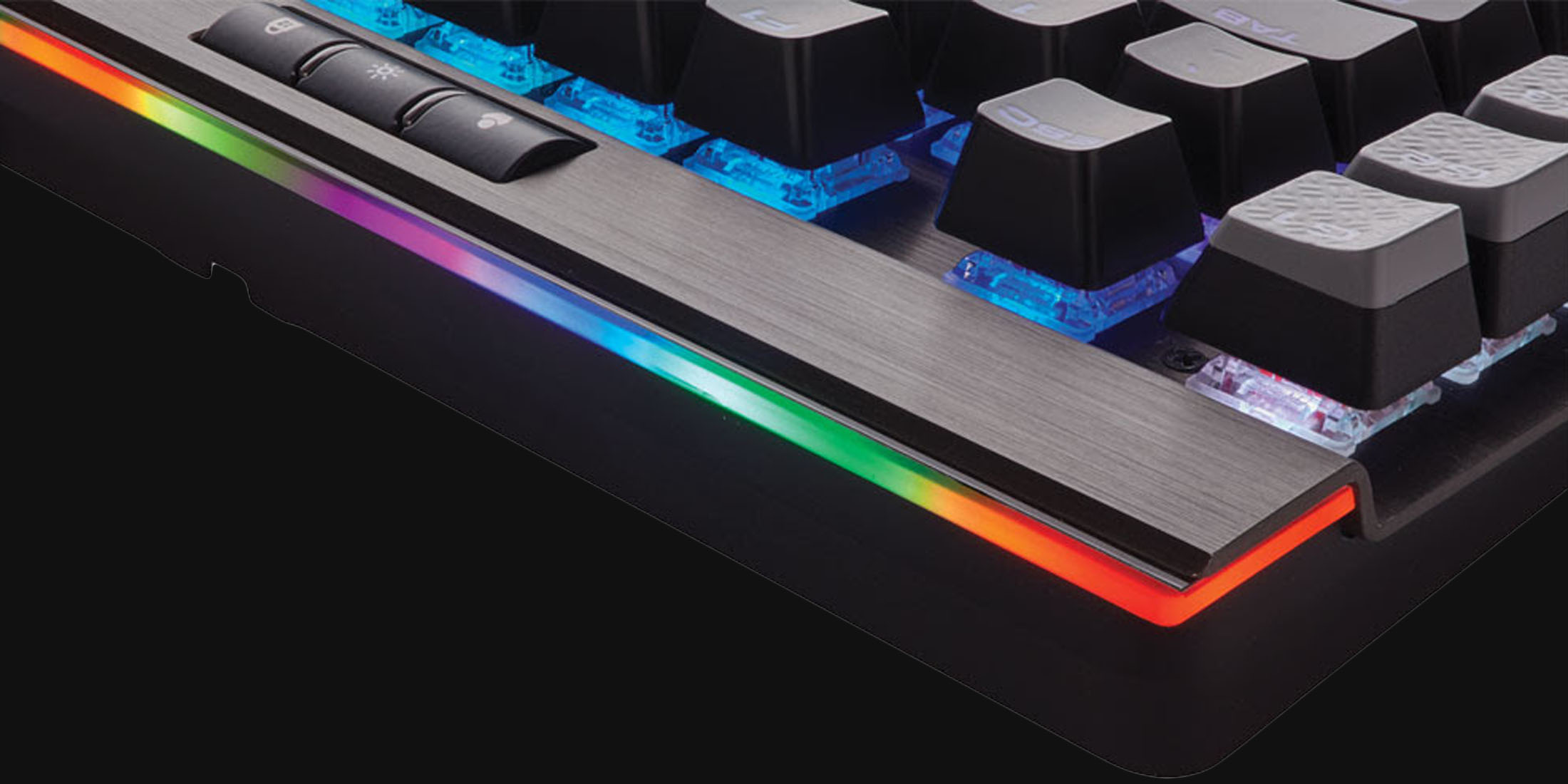 Existing K95 features like RGB backlighting, Cherry MX switches, and “aircraft-grade anodized aluminum” return, with a few additions. This time, we asked Corsair what “aircraft-grade” meant – is it 6061 aluminum? 7075? They weren’t sure at the suite, but insisted that it’s high quality. Considering what a keyboard goes through, any type of aluminum is probably good enough.

The 18 G-key section seen on past models has been reduced to a more manageable single row of 6, offset from the rest of the keyboard, with differently-textured keycaps installed to avoid any accidental presses. Custom keybinds and macros can be saved to 8MB of onboard memory, as well as “complex, multi-layer lighting profiles” via Corsair Utility Engine (CUE) software, which our reviewer Michael Kerns is a fan of. Finally, the K95 now features “innovative LightEdge technology,” which, as astute readers may have guessed, means that the edge lights up. This is done with a lightpipe and 19-zone RGB section that can be lit and animated separately from the rest of the keyboard, presumably in order to illuminate the user’s literal desktop.

The Scimitar has gained a “PRO” designation, and like the K95 Platinum, has replaced its predecessor on the Corsair site. The new model uses a PMW3367 sensor capable of up to 16000 DPI instead of the previous 12000, and onboard storage allows profiles to be saved. The mouse is pre-loaded with three generic profiles, ”MMO,” “MOBA,” and “Productivity.” CUE can be used to alter these profiles and the 4-zone RGB lighting effects.

Otherwise, this is the same familiar Scimitar. The main selling point is its array of 12 programmable thumb buttons which can be adjusted forwards or backwards in an 8mm range, hopefully dodging some of the problems similar mice have with inaccessible keys or accidental clicks. Corsair has added a subtle ‘home’ notch on the #5 key for quicker homerow thumb placement. The Scimitar Pro is available in black or black and yellow, although currently only the black model is unlocked on Newegg for $80. 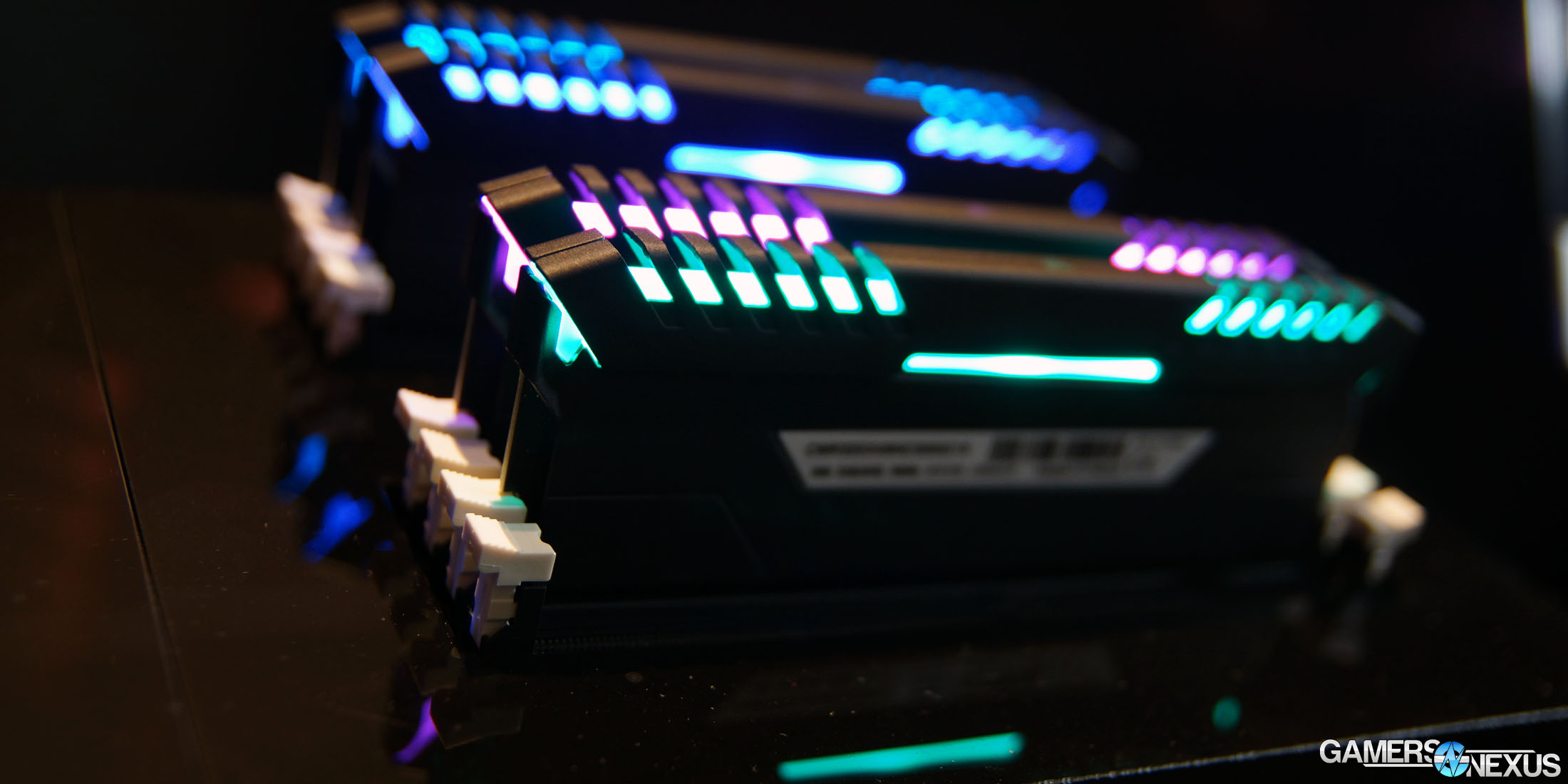 We’ve got a separate video going up on the RGB memory, but it’s pretty straight-forward: The RAM has RGB capabilities and communicates through Link, which allows for modules to be placed into groups and colorized independently (or as a unit). SKUs aren’t ready yet, but should be focused on 3000MHz DDR4 and 3200MHz DDR4.

The memory is a follow-up to Corsair’s single-color modules (red, white, blue) that we saw at Computex 2016. The new units are fully RGB-ready and communicate via the SM Bus (like the new HyperX Predator memory) for color configuration. Rather than rely on external motherboard vendor software, Corsair is using its own Link utility for lighting management. It is not presently possible to synchronize the LEDs with motherboard LEDs (unlike the Predator), but Corsair is actively researching the prospect and is also looking into synchronization with its own existing RGB products (SP/HD series).

Technically, Corsair also had a chair at CES, but it’s just another of the million Vertagear-style “gaming” chairs. Nothing special. Every single “gaming” chair we’ve seen at the show uses the same arm rest hardware, the same pillows, the same base and gas lift. The difference is in color and, maybe, internal material quality (but we’d have to cut one open to validate, and the vendors didn’t let us do that).