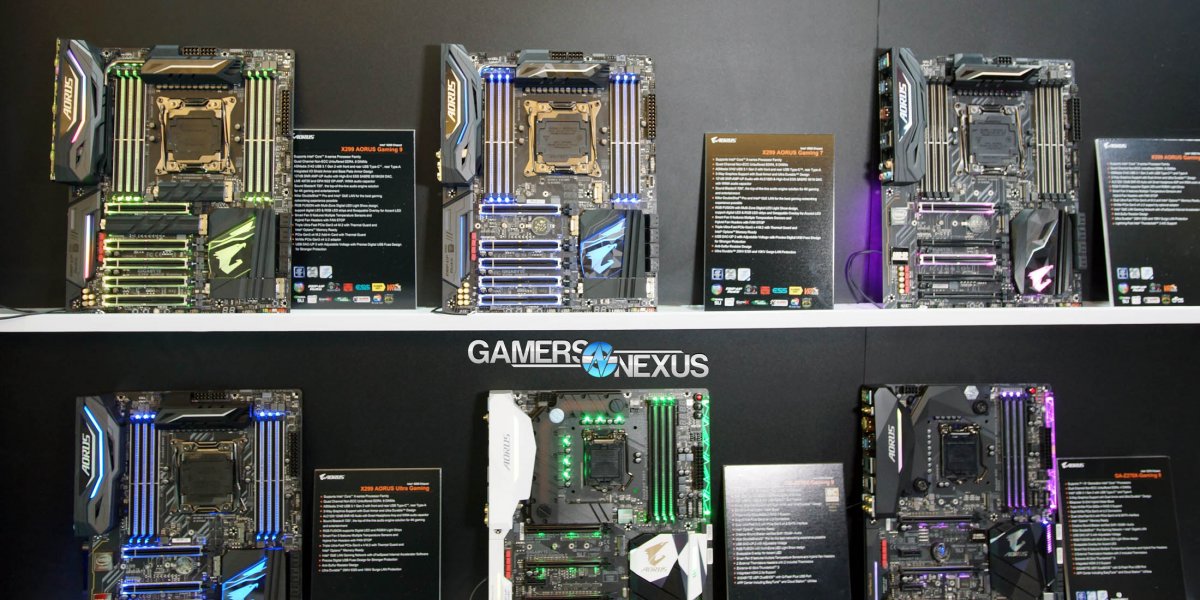 Preceding the embargo lift of Intel’s X299 announcement, we met with Gigabyte at Computex 2017 to discuss the company’s new line of X299 motherboards. New launches include the Gaming 9, Gaming 7, Gaming 3, and Ultra Durable 4 motherboards (along with a workstation board, which we won’t focus on) for the X299 chipset, hosting KBL-X and SKY-X CPUs. We’ve already detailed some of EVGA’s boards as well, so if KBL-X or SKY-X interests you, also check that content out.

That said, we’re still not quite sure why KBL-X exists. It’s an odd part: Kaby Lake refreshed on a new socket type, where half the motherboards will be comparatively overpriced by means of being outfitted for Skylake-X parts. KBL-X won’t, for instance, be able to leverage the left half of the DIMM slots on the X299 boards, while SKY-X will. It’s a weird move from Intel. Regardless, they’re not our focus right now: Let’s start with Gigabyte’s Gaming 9 line and work our way down, keeping in mind that these boards are really best leveraged with Skylake-X, though are technically compatible with KBL-X.

Gigabyte’s X299 Gaming 9 flagship motherboard hosts the LGA 2066 socket, as expected, and deviates from the trend EVGA attempted to set by running a full 8x DIMM slots. The motherboard runs LEDs everywhere, which is one of the differentiators in cost positioning for this lineup, including DIMM slots, PCH, PCIe slots, and near the VRM. The IO cover uses a digital LED strip that descends to the audio region of the board, too. 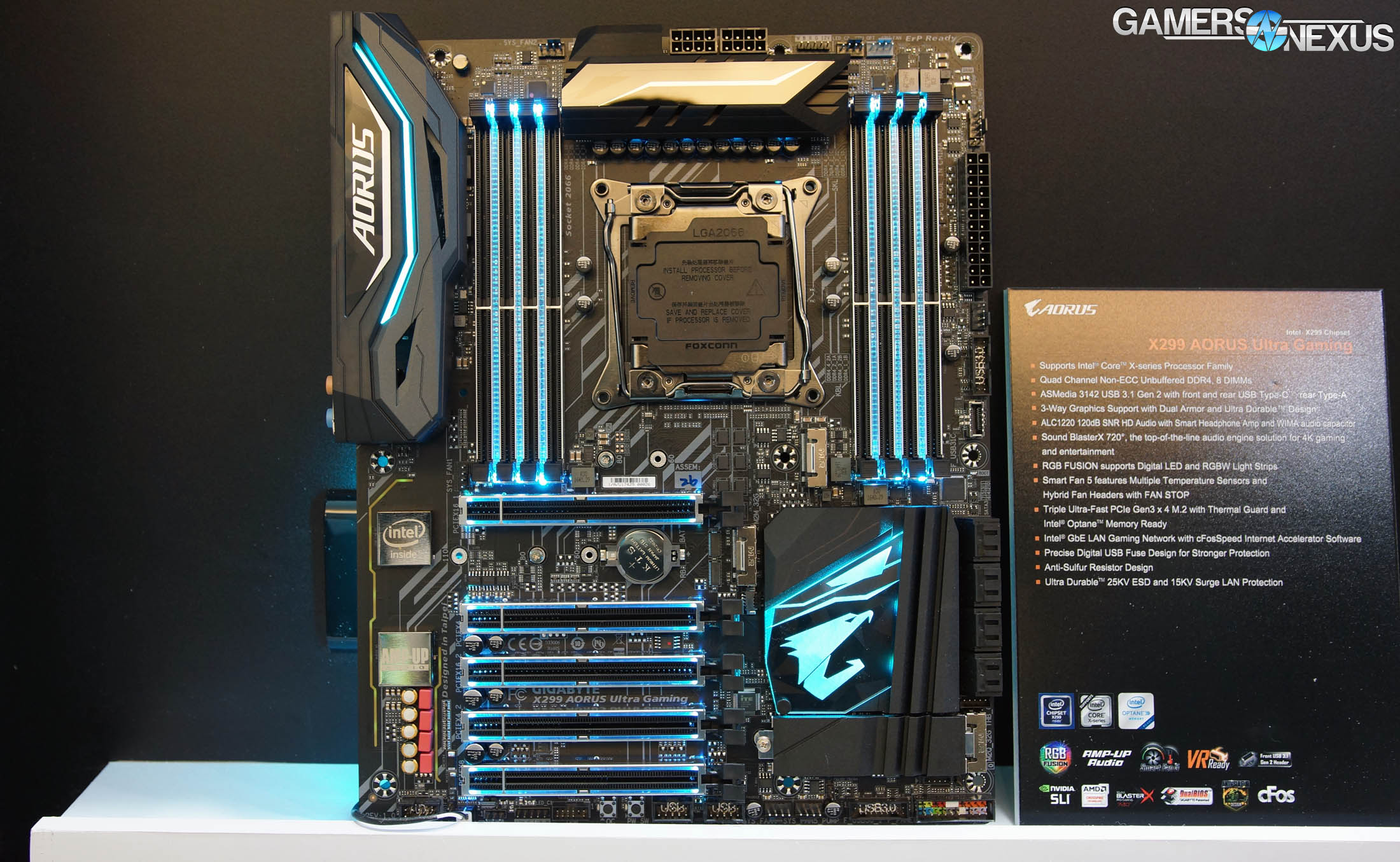 For core specs, Gigabyte is running 5x PCIe Gen 3 ports that are wired for, in order, x16, x4, x16, x4, x8. This would support, if for some reason one were to do it, 3-way SLI with x16/x16/x8 (given the right CPU with high lane count). Alternatively, Gigabyte’s setup could leverage its IRSTe port to virtualize RAID across numerous PCIe SSDs, like a 4x 750 setup, for instance.

Tucked away between all the PCIe slots and the CPU socket -- and south of the chipset cover -- are Gigabyte’s new M.2 heatsinks, which contain some actual fins and aluminum surface area. The company is confident that its M.2 heatsink will function better than some of its competitors, though we also have some suggestions for the manufacturers on this front -- like sinking the M.2 SSD into the motherboard PCB for bottom-side cooling. This is something that EVGA has been trying with some success. More on that later.

As for the VRM, all the boards use the same one: Gigabyte is using an 8-phase Vcore configuration with IR3556 MOSFETs, with 2x VDDR VRMs also using a 2-phase IR3556 configuration. 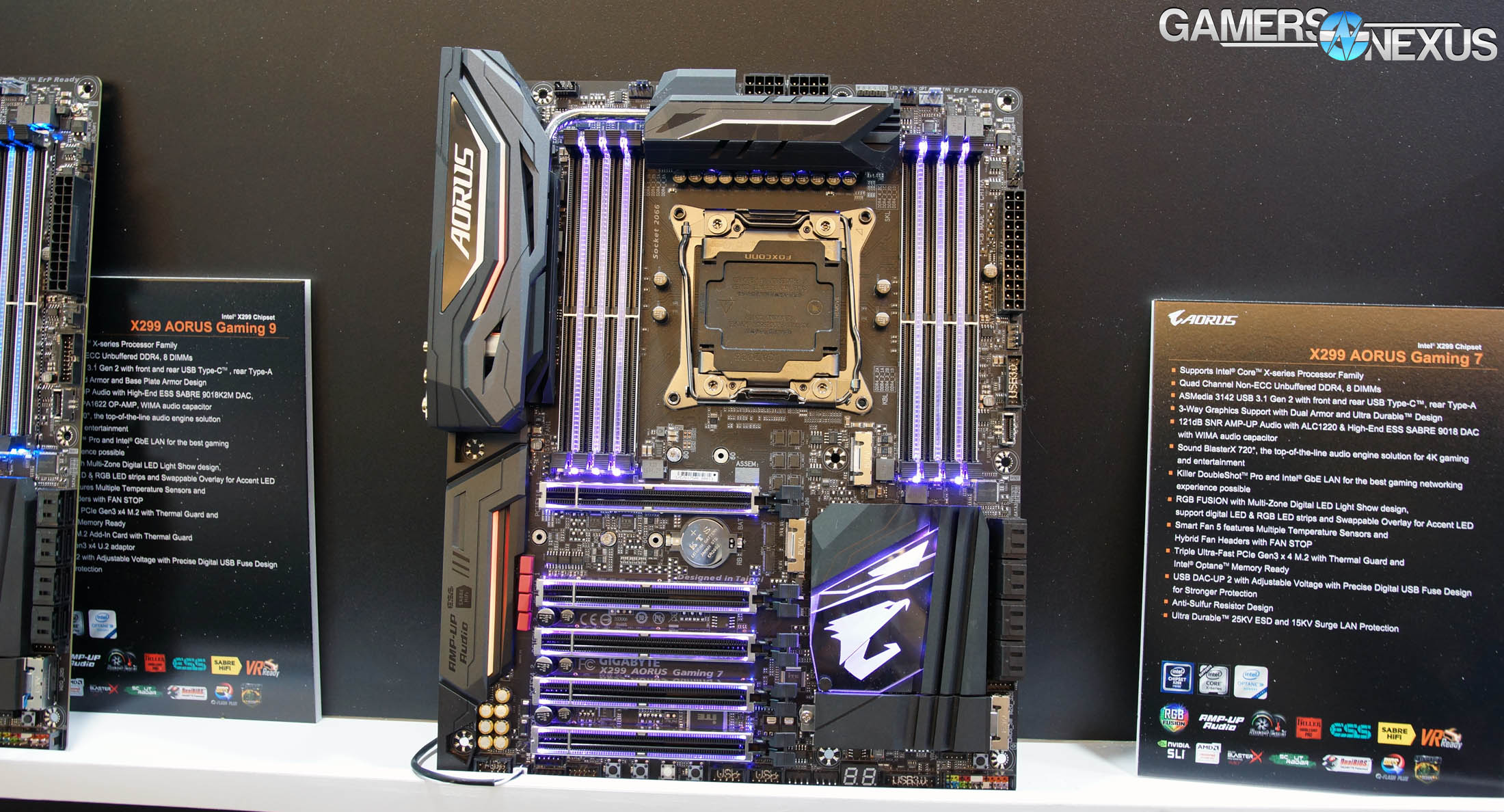 The X299 Gaming 7 isn’t too different: The motherboard sheds two of its M.2 heatsinks, primarily, but otherwise keeps the same overall board layout. PCIe slots are the same, as is the x16/x4/x16/x4/x8 wiring. Technically, the Gaming 7 also reduces the complexity of its audio componentry, though we had no chance to get hands-on and don’t normally talk audio in our coverage.

The VRM setup is the same as the Gaming 9. 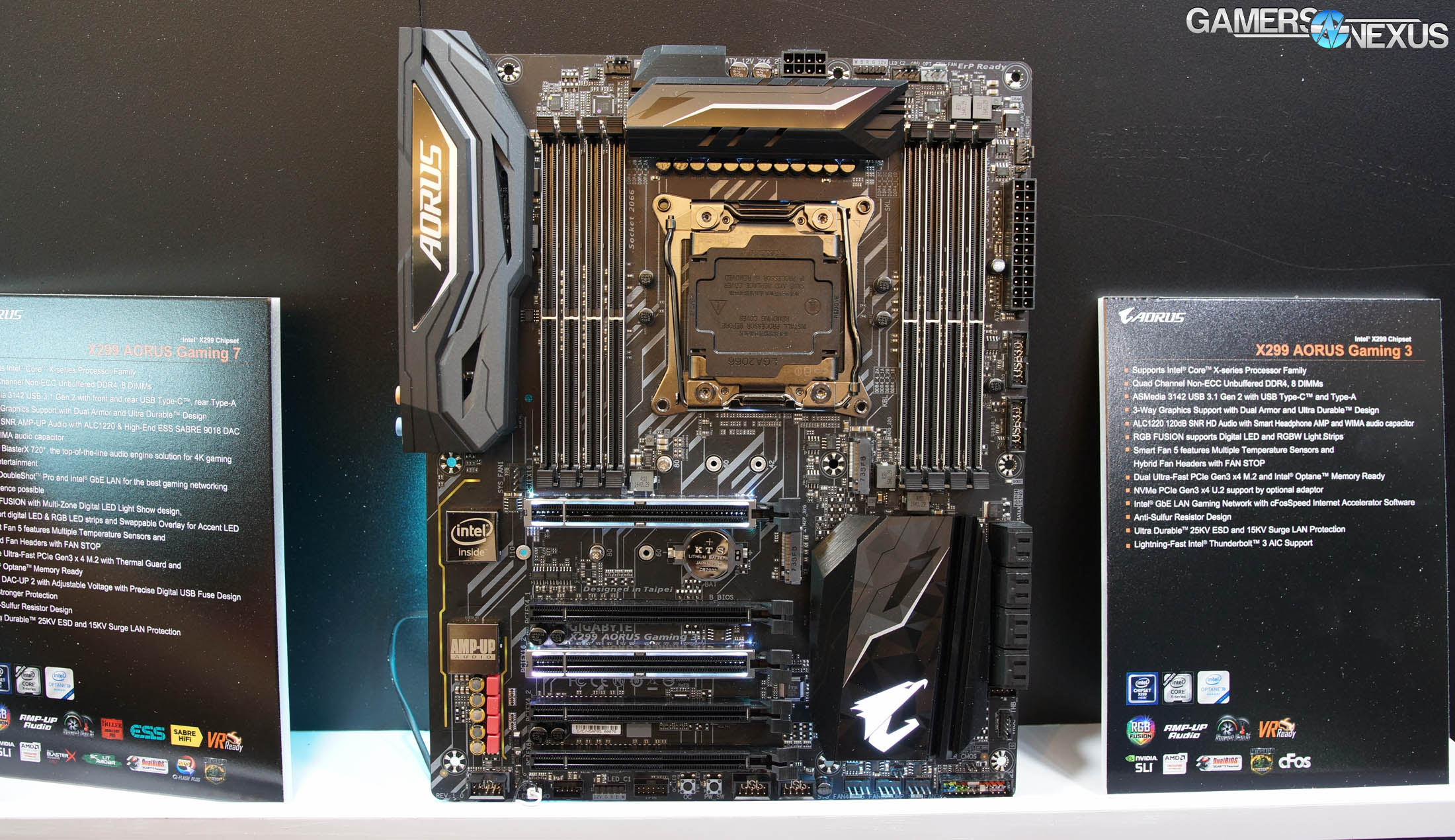 The Gaming 3 axes some of the RGB LEDs, going down to 2x PCIe slots with RGB LEDs, no DIMM LEDs, and no audio/IO cover LEDs. The VRM is the same and the board layout is mostly the same. This model also loses all of its M2 heatsinks, simplifies the audio hardware further, and lowers its price as a result. If interested in an X299 board that has a decent VRM but doesn’t go crazy on LEDs, this isn’t a bad option -- though the Ultra Durable 4 may be even better in that scenario, given its complete lack of LEDs and frills. 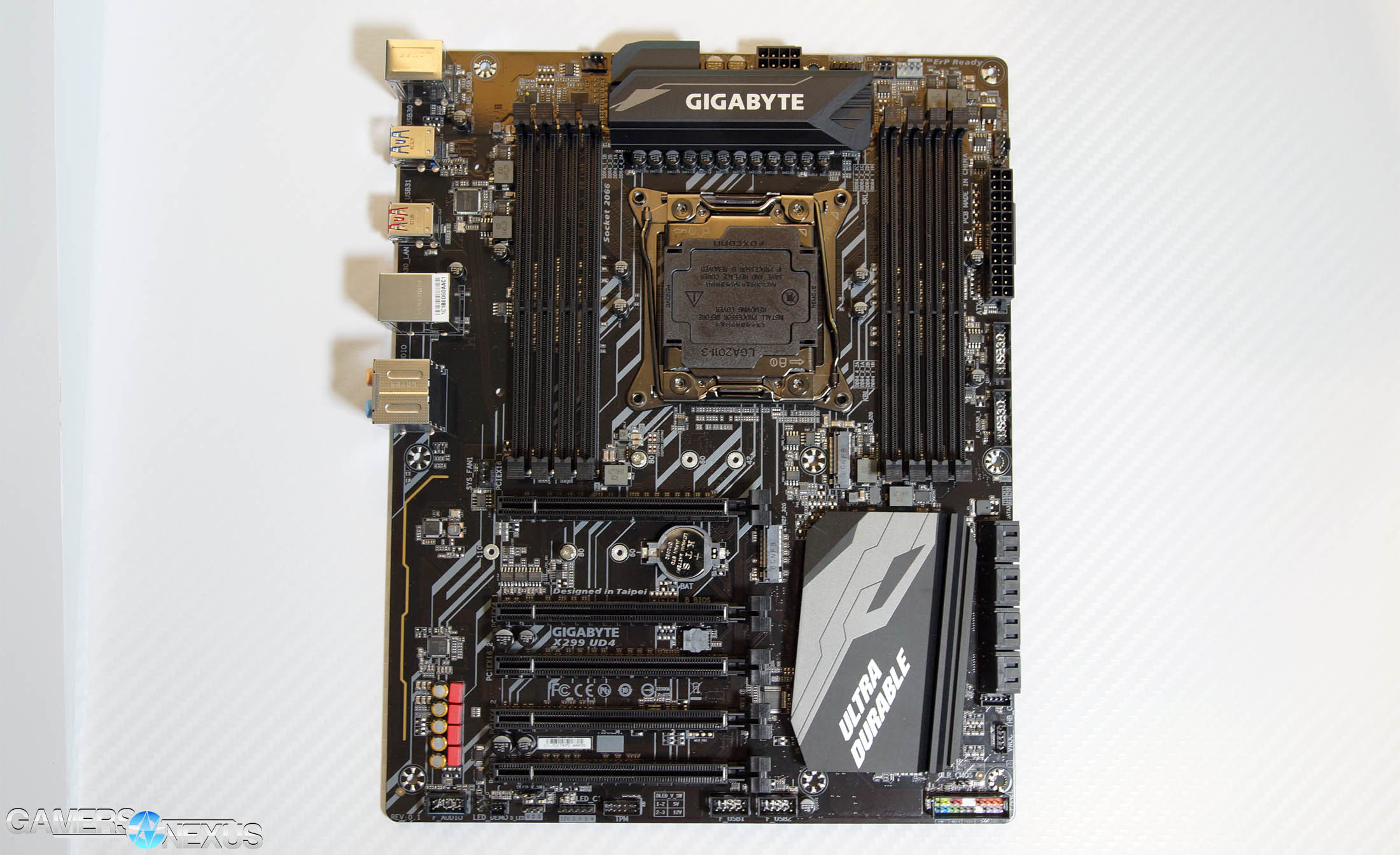 And the WS board: 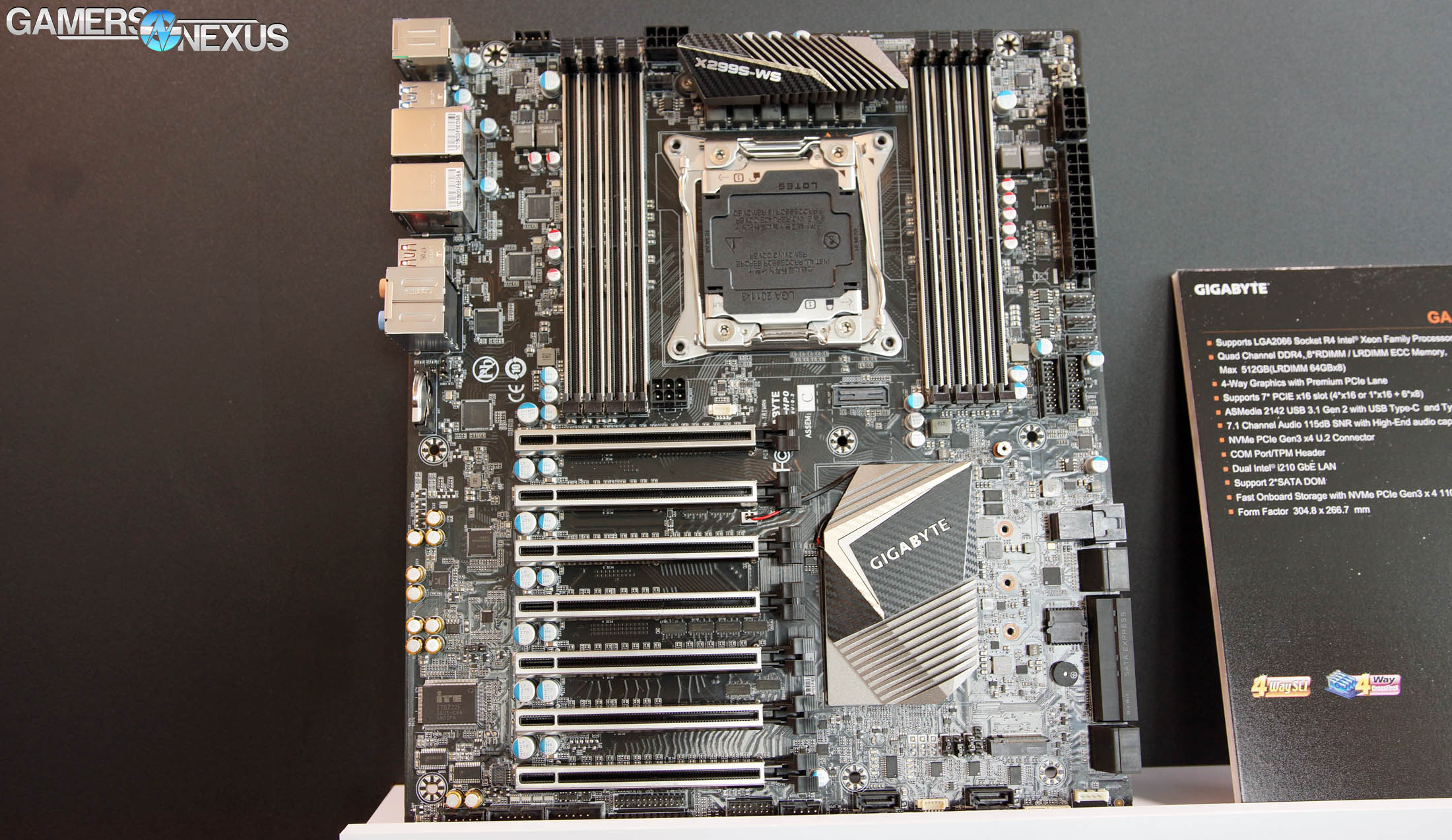 Stay tuned for further coverage from Computex. If you’d like to support our efforts, as always, you can go to Patreon or our shirt store.