MSI’s new “Raider” edition GE63 & 73VR notebooks will use the company’s updated heatpipe + fan cooling solution, which they’ve called “Cooler Boost 5.” We haven’t yet gotten to see the actual solution up close, but have been told that it hosts 7 heatpipes of nebulous size – which of course isn’t everything, but is still important – that connect to two fans with densely-packed blades. MSI provided a count of 31 blades on the new fans, using a fin design that should theoretically increase air pressure through the chassis. Increased pressure would help cool down all those heatpipes more quickly, provided they are somewhere in the air channel, though there’s also a noise add. This is where nVidia’s Max-Q initiative comes in, but we’ll discuss that more below.

As for the rest of the solution, four ventilation ports are present on most sides of the notebook, with the largest of them on the bottom. We can see some of the heatpipes crossing paths in the central ventilation port in this photo:

The fans are located on the sides, nearest the CPU and GPU, so this vent is more for drafted airflow and exhaust. We’ll have to test thermals on the notebook prior to commenting on the performance. The two fans are visible in the corners of the above photo.

As for the rest of the specs, some of the notebooks will ship with 3ms GTG response displays, which MSI demonstrated by applying motion blur to a standard screenshot and showing it next to an unmodified screenshot, and a 120Hz refresh rate. The series with mechanical keyboards – that’d be the Titan GT series – has now moved to Cherry MX Speed Switches, which we detailed heavily in this review. These switches are essentially MX Reds with the actuation depth moved up to 1.2mm (from 2.0mm). The difference, at 0.8mm, can primarily be felt while typing and is entirely subjective. 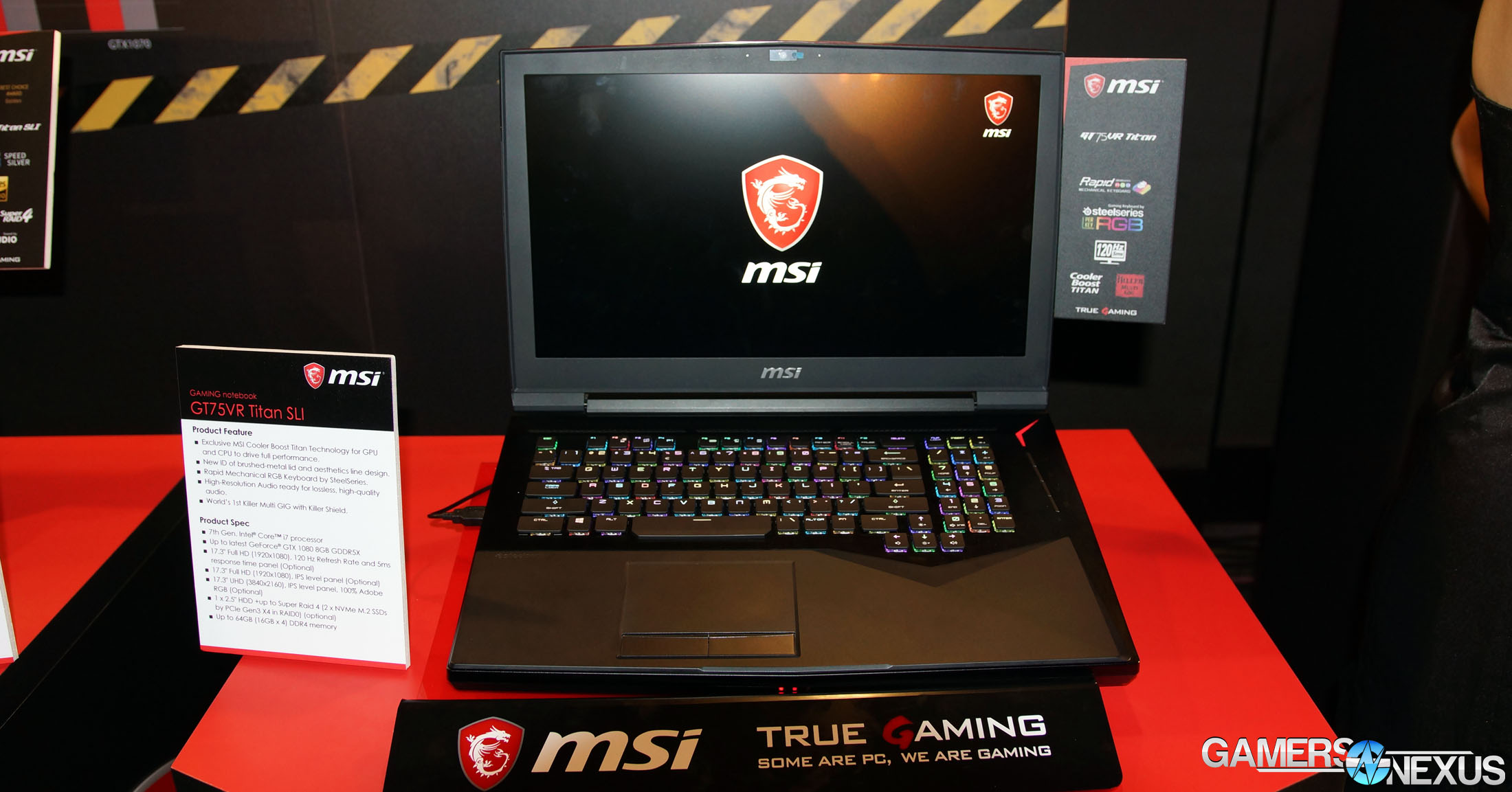 MSI’s GE series notebooks will ship in 15-inch and 17-inch varieties, using the GTX 1070 and higher-refresh panels, while the GT series notebooks will ship in the expectedly large form factors for desktop replacements. For cooling the GT series notebooks will run 29-blade fans, also in a dual-fan configuration, with 12 heatpipes and 4 ventilation ports. The emphasis on heatpipe count isn’t the most useful metric, but does provide a baseline understanding that, yes, MSI is using the most on the market. This increases weight, as copper is a heavier metal, but does also increase cooling potential, theoretically. The GT series is capable of overclocking through one of MSI’s many included software applications.

We won’t go too deep with Max-Q right now, but will at least explain it. This is a phrase you’ll see turning up on new notebooks going forward, and is essentially a certification program headed-up by nVidia, aiming to encourage manufacturers to stop producing bad products. New notebooks that hope to comply with nVidia’s spec will spend time in validation and testing at nVidia HQ, with technicians primarily focused on validating noise performance and fan speed curves versus other key metrics, like thermals and frequency. A lot of the Max-Q testing is similar to what we do in our own notebook reviews and GPU reviews, so readers should be largely familiar with the type of data generated. That said, the difference is that nVidia is leveraging its data collection to inform manufacturers how to improve products, providing more of a thermal and noise spec than previously.

An analog might by Intel’s old UltraBook naming, where manufacturers had to build a machine with the right specifications to receive the name badge. For nVidia, the Max-Q specification demands <40dBA noise output under normal operation for the fan, steadier frequency performance (without the clock drops over time, triggered by thermal thresholds), and better VRM designs. This last point is interesting, as VRM power components are often overlooked with laptops: more efficient v-regs will naturally reduce heat over a given area, particularly when spreading heat across a wider region by using more phases or doubling schemes. We don’t have exact details as to the v-reg suppliers nVidia is recommending, but should soon know from tear-downs. Also of note, we brought up the idea of bloatware being included in nVidia’s Max-Q guidelines, and the company immediately expressed interest and seemed on-board with the idea of encouraging manufacturers to eliminate unnecessary software.

As for MSI, the company’s GS line of notebooks has already received the “Max-Q” badging from nVidia, and will be featured in the GS63VR & 73VR GTX 1070 machines.

We hope to get more information on MSI’s product later in the show.