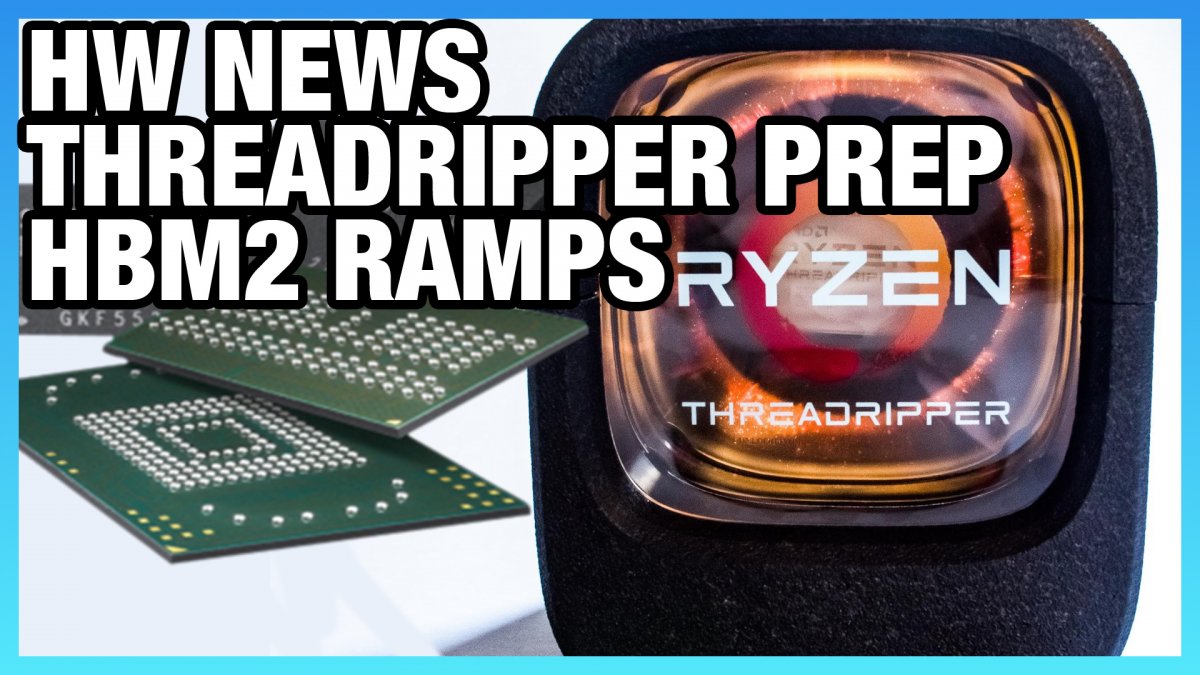 Samsung is rallying their HBM2 production lines, so to speak. In response to both emerging market demand and expansion, Samsung has announced their intent to increase production of their 8GB HBM2 packages. By the first half of 2018, Samsung anticipates that more than 50% of its HBM2 volume shipments will be the newest 8GB HBM2 stacks.

Gigabyte shipped nearly one million fewer motherboards in 2016 than 2015, despite higher overall ASP and a revenue hike all totaled. The company is merging its graphics card and motherboard divisions into a single business unit, with Aorus branding continuing on as a consumer-targeted brand for gaming products.

Reports by Reuters suggest that Corsair is in talks with EagleTree Capital for an acquisition summing more than $500 million. Initial reports suggested that Corsair would be acquired in its entirety; however, other reports suggest that only part of Corsair is being offered. In 2013, a part of Corsair was acquired by Francisco Partners (for $75 million). Allegedly, only this share is up for sale. Per the usual, take this information with a grain of salt.

Seagate is returning to the SSD market with a new, low-cost series of SSDs. The Nytro 141 series will offer six models, all SATA based and using TLC NAND. The lowest cost/capacity is the 256GB, and is currently looks to be selling for $85. Other capacities offered include 240, 480, 512, 960, and 1024GB. All drives are in the 2.5” form factor, offer up to 300TB of TBW, and a 1.5M MTBF rating. Seagate has the six models demarcated between performance/endurance and cost competitive capacity. All drives come with a 5-year warranty.

Western Digital’s “Blue” series and SanDisk’s “Ultra” series of SSDs are going to see an update to 3D BiCS Flash and will offer higher capacities up to 1TB for WD Blue, and 2 TB for SanDisk Ultra. The new drives are said to be shipping, but it is not known when retailers—of if they have already—will be receiving the new stock. Both the WD Blue and SanDisk Ultra use identical hardware—64-layer TLC provided by SanDisk and a Marvell 88SS1074 controller. The WD Blue will offer both 2.5” and an M.2 option; SanDisk looks to only offer a 2.5” configuration. As before, both series of drives will operate via the SATA 6Gbps interface. Prices for the refreshed WD Blue and SanDisk Ultra start at $90 and $100 respectively.

With the advent of aftermarket cooling solutions for M.2 drives, Alphacool is moving beyond simple heatsinks. Alphacool is now offering the HDX-2 (passive) and HDX-3 (watercooled). Both coolers are affixed atop a 4x PCIe card which houses one 80mm M.2 drive. The HDX-2 uses a large aluminum heatsink and relies on passive operation for cooling, while the HDX-3 uses a nickel-plated, copper waterblock with standard G ¼” threaded connections. Pricing and availability is TBA.

ASUS has rolled out a new flagship AM4 board, geared for those considering a Ryzen platform. The new motherboard is based on the high-end X370 chipset, and includes a notable 13 fan headers, aimed at ardent overclockers and watercooling enthusiasts. If that wasn’t enough, the board supports a fans extension card—available from ASUS—that brings the total fan header count to 16. Additionally, the board has addressable LEDs and an RGB header, 2x reinforced PCIe x16 slots, onboard 802.11ac Wi-Fi, Bluetooth 4.1, and M.2 connectivity. The ASUS ROG Crossfire VI Extreme will be available in August for $350.

Corsair introduced the new RMx White Series, extending a white hue to the company’s RM850x (850W) and RM750x (750W) power supplies. The PSUs are 80 Plus Gold-certified, fully modular, and come with a 135mm rifle-bearing fan. Additionally, the PSUs offers heavy-duty protections, Japanese capacitors, a MTBF of 100,000 hours, and a 10-year warranty. The RMx White Series will come with cables individually sleeved with paracord and an assortment of cable combs. The RMx White Series RM850x is $170, while the RM750x is $150.

As a miscellaneous news item, Blizzard composer Russel Brower, but known for music in StarCraft 2, Overwatch, and World of WarCraft, announced that he’d been laid off last week. The composer stated on Facebook that his job had been eliminated as part of a “sound decentralization” initiative undertaken by Blizzard, but that future freelance work may be possible.