The key feature is clearly NZXT’s plating all over the board, somewhat reminiscent of the ASUS Sabertooth boards. The plating is entirely steel, and is not meant as a thermal dissipative material. The M.2 SSDs appear to have the popular M.2 heat sinks but, for once, this is a motherboard which doesn’t actually utilize them in that way. The M.2 covers are, in fact, just covers – nothing more; the underside is actually plastic, although the top is, for some inexplicable reason, aluminum. Either way, it’s not doing much for your SSDs, so they are meant to be removed upon installation. This is OK, we think, as SSD throttling is difficult to encounter in most scenarios that this board would engage, and you technically shouldn’t cool NAND, anyway, as it prefers to be warmer, while the SSD prefers to be cooler. Back to the N7 armor, though, it’s available in white, black, and soon will offer heatsink covers in blue, red, or purple. NZXT is targeting customization and visuals with their motherboard, and they’ve minimally succeeded in building a unique look in an otherwise highly competitive, low margin market.

For board components, we haven’t yet dismantled this board, so we’re not positive on the VRM componentry or quality – we’ll look at that as soon as we’re back from CES. What we know for now is the top-level information: It’s a 15-phase digital VRM that uses Infineon FETs and drivers. We’re not sure on precisely what combination of Vcore and Vmem phases the board has at this time. Core components include 2x full-length PCIe x16 slots, 1x PCIe x1 slot, and 2x PCIe x4 slots.

Memory support is limited to just 3866MHz at this time, which is admittedly limited for a $300 motherboard, but NZXT’s focus isn’t on overclocking or on memory support – it’s on the HUE and the GRID, which NZXT suggests grant a $100 value. 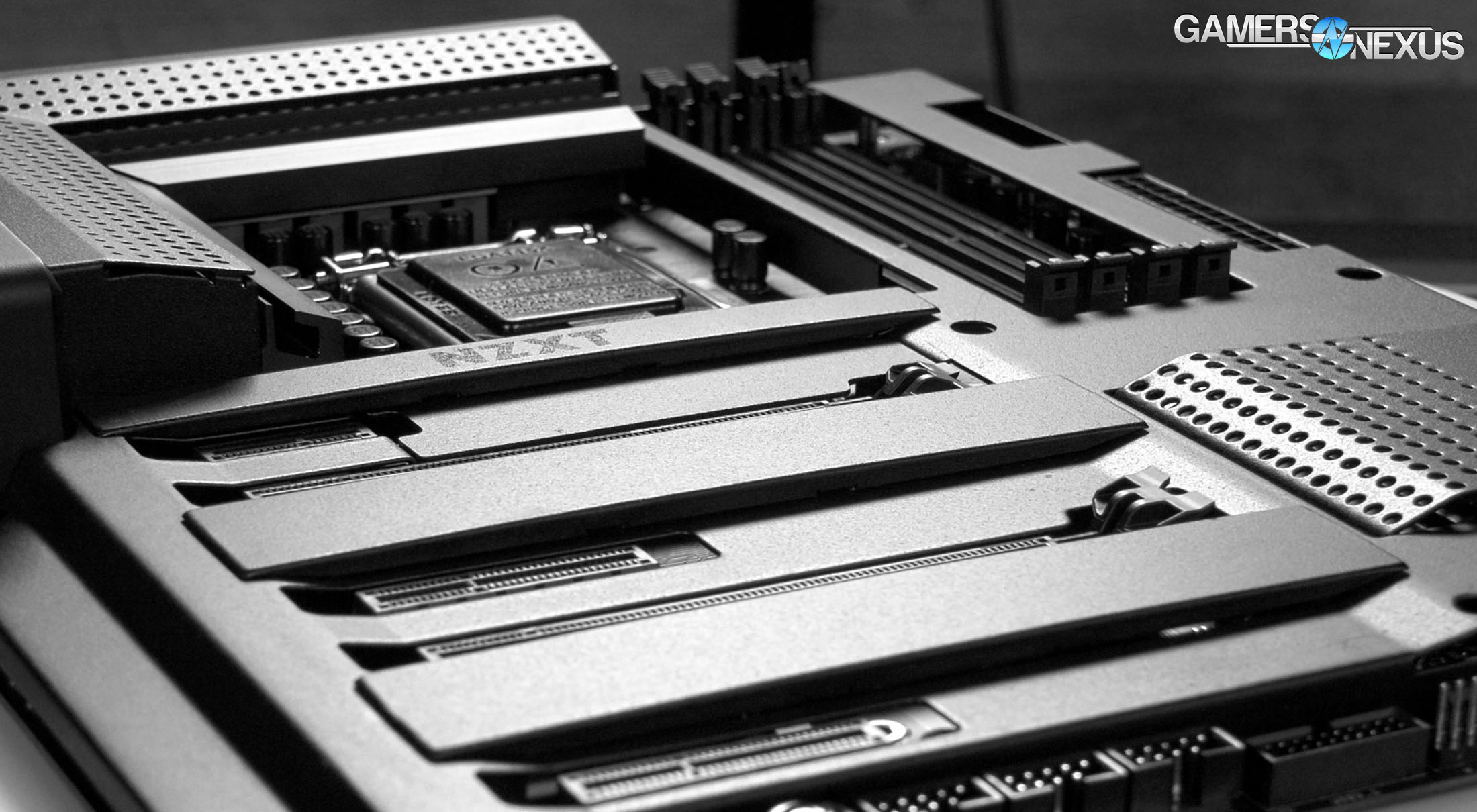 The HUE is an RGB LED lighting controller that integrates with CAM, and the GRID also integrates with CAM, but offers fan control options. This is illustrated by the ample fan header placement on the motherboard, where we’ve counted nine fan channels present on the motherboard. The motherboard integrates the same features that were a big push for the H700i case, which debuted NZXT’s “Smart Device,” but on-board. We could also extrapolate that NZXT would inevitably ship an H700d – for dumb – to accommodate the $300 motherboard, considering there’s no reason to pay for both the H700i and the N7 in their current forms. You’d be doubling-up on expensive hardware.

From what we’ve seen so far, it looks like NZXT may have worked with ECS on this motherboard. We’re still confirming that, and will be able to fully confirm once home, but preliminary looks at componentry and firmware seem to indicate ECS as a supporting manufacturer.