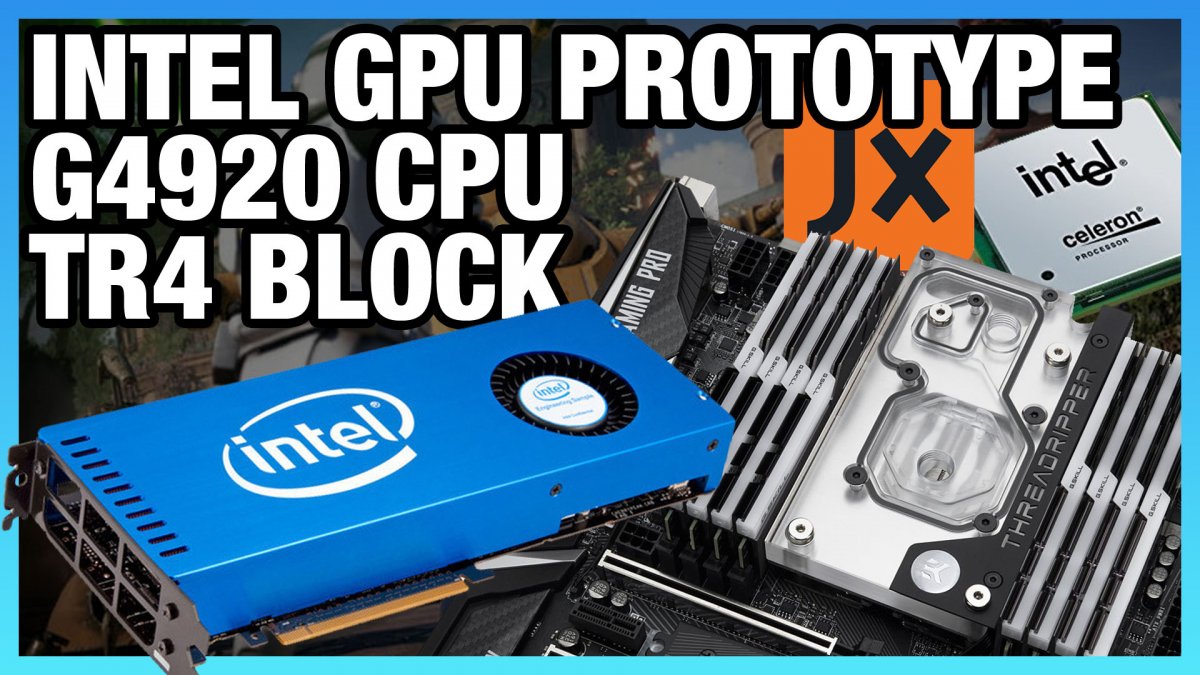 Intel published a presentation on its discrete GPU engineering at the IEEE Solid-State Circuits Conference, primarily highlighting a prototype 14nm GPU that uses a multi-chip module approach to graphics processing. It’s just a prototype for now, which means that we still know nothing of the end-release specifications, but this is a quick reveal when considering the relatively recent hiring of Raja Koduri, former RTG Chief Architect at AMD.

Intel’s IEEE slide shows a “Complete Graphics System” as a 14nm silicon component which contains a low-power GPU, a system agent component, and a configuration and debug path. This is mounted to an FPGA board, which then communicates via PCIe to the host. The test chip is sized at just 8mm x 8mm, making it clear that this is a simple prototype, and totals 1.54B transistors in that area. The GPU voltage is regulated through an integrated voltage regulator, similar to the FIVR of Intel CPU architectures. For the prototype, frequency is operating at 50MHz for 0.51V, or 400MHz for 1.2V. One of the main focal points for Intel’s presentation was on faster turbo-to-unturbo transitions, which will theoretically aid in limiting power consumption.

More on this later. Probably a few years.

Intel is researching new technology, basically, and the prototype might not make it to market in any form.

On the topic of Intel, a few new Coffee Lake S CPU SKUs were accidentally posted early to Newegg, including an unintentional reveal of forthcoming G-series Pentium and Celeron CPUs. These include a G4900 and G4920, theoretically priced around $52 and $66, respectively. We know the G4900 will be a 2C/2T CPU with 2MB of L3 Cache, and the G4920 will run the same specs, though presumably with a different frequency. There are rumors out there for the frequencies, but nothing confirmed yet.

One more Intel-adjacent story, then we’re moving to AMD. Gigabyte has announced a heavily modified alternative of the Z370 Ultra Gaming motherboard that we’ve lamented, with the updated variant upping phase count from 7 total phases to 11. A few additional changes are also being made, like an additional M.2 heatsink and better chokes, used to reduce coil whine. Price will land around $160, and the name is officially the Ultra Gaming 2.0. These changes should help address some of our initial concerns, although the heatsinks really aren’t any better than previously.

EK has announced a socket TR4 monoblock compatible with two MSI X399 motherboards: Gaming Pro Carbon AC and SLI Plus. The coldplate covers the entire Threadripper IHS and cools the VRMs as well. From pictures, it appears that the fin area does completely cover the CPU dies. The block contains a removable RGB LED strip which is compatible with MSI’s Mystic Light software, and MSRP is 126 euros or $140.

Windows Insiders using Windows 10 Pro for Workstations will soon be able to enable the “ultimate performance” power plan, designed to “eliminate micro-latencies associated with fine grained power management techniques.” This is specific to the Workstation and Enterprise editions of Windows 10 for now.

Our colleagues over at TechGage have discovered a security vulnerability in the Jaxx Cryptocurrency wallet, which they’ve detailed fully in their article at TechGage.com. The article goes on to demonstrate that the Jaxx wallet creates a cache folder on the host system, which can then be copied and pasted to any other computer with the Jaxx wallet. Without requiring any sort of password, this cache folder can be copied to the new location, then used to access all the currency stored in the wallet. The optional 4-digit pin code is also bypassable through a security exploit, and further only offers 10,000 combinations to attempt to crack, even if you weren’t using exploits to circumvent the code.

As TechGage shows in their video, it would be trivial for a user with access to the PC to copy this cache folder and send its cryptocurrency to another wallet. One instance of such an exploit might be a PC repair technician who has physical access or a Meltdown or Spectre exploit that uses side-channel attacks to gain access to memory and can be executed via hijacked ad network javascript.

TechGage details the exploit further in their content, which we’ve linked in our show notes for this episode, found below.

Speaking of colleagues, our other colleagues at Hardware Unboxed posted a video piece that strikes close to home for GN, talking about thermal throttle scenarios for Intel CPUs. The Intel stock cooler is tested against some aftermarket solutions in the video.

Intel is expanding its bug bounty program as a consequence of the Meltdown and Spectre exploits. The invitation-only program was launched in March 2017, only a few months before they were notified of Meltdown. Now the program is open to all security researchers and bounties are being raised across the board, up to $100,000 in some areas, and up to $250,000 in a temporary program specifically focused on side channel vulnerabilities like Meltdown/Spectre. The intent is to encourage “coordinated disclosure,” or in other words, make sure Intel is the first to know. As rough as the past few months have been, it looks like Intel knows that they dodged a bullet by having Google Project Zero discover and report vulnerabilities to them first.

Following EA’s Star Wars: Battlefront 2 debacle, which came between EA’s Battlefront 1 and Visceral Games shutdown debacles, a rumor is circulating that Lucasfilm/Disney are looking for a new studio to develop with the Star Wars license. The source for this specific rumor is an article from Cinelinx, which cites Ubisoft and Activision as possible contenders, but doesn’t offer much else in the way of concrete statements. Regardless, EA’s stock prices have continued to rise higher than ever with the reintroduction of microtransactions to Battlefront 2.