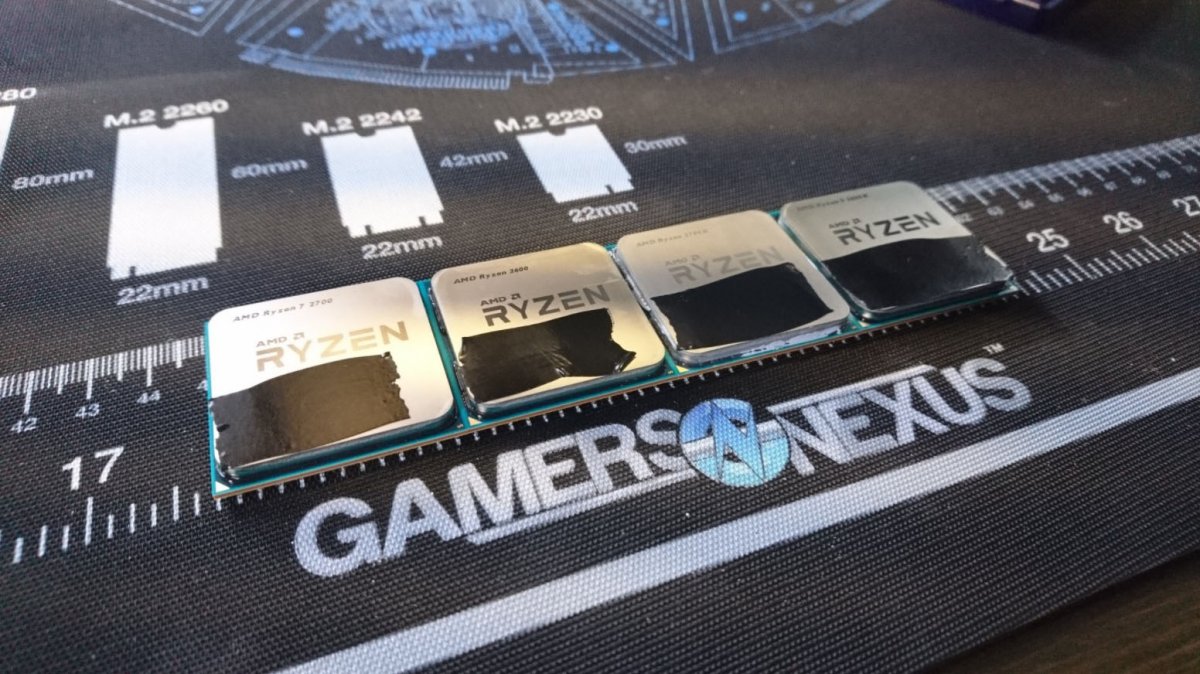 AMD’s impending Ryzen 2 CPUs – not to be confused with Zen 2, the architecture – will launch on April 19, 9AM EST, and are preempted by yet another “unboxing embargo.” We’re not technically covered under these embargoes, as we’ve sourced parts externally and are operating independently for this launch. That said, as we’ve stated in a few places, we have decided to respect the embargo (although are under no obligation to do so) out of respect for our peers. This is also being done out of trust that AMD has rectified its preferential media treatment exhibited for Threadripper, as we were told the company would do.

Still, we wanted to share some preconditions we’re considering for test cases in our Ryzen 2 CPU reviews. Some of that will be covered here today, with most of the data being held for the April 19 embargo lift. We have been testing and iterating on tests for a few weeks now, updating EFI as new versions push and collecting historical data along the way.

The core specs – those regurgitated all over the internet, undoubtedly – will follow below.

The CPUs discussed today include (Amazon pre-order links below, although we never recommend pre-ordering PC hardware):

XFR2 and Precision Boost, from our preliminary testing, are the most critical to eye during initial review rounds. We’ve observed that EFI revision heavily impacts XFR2 implementation and power consumption at the socket, something we’ll discuss more later. We have also observed significant performance uplift or changes across EFI revisions for both X370 and X470 motherboards, with many of these stemming from either XFR2 implementations or tertiary/subtimings. We encounter some philosophical questions here, like whether or not XFR2 should be fully enabled during core reviews: The CPU can exit TDP specification under these conditions, often by significant jaunts, but it is also an advertised feature by AMD. Rather than deliberate over this question for our launch review, we’ve decided to just test multiple configurations and draw conclusions at time of review.

In some ways, the XFR2 roll-out mirrors MCE – but there are key differences. MCE, for instance, is a board vendor pre-overclock that exits Intel specification entirely. XFR2 is an AMD feature that can push past power specification, but is otherwise an advertised feature of the CPUs. The “mirror” is primarily in how motherboard vendors are integrating for XFR2: Some EFI revisions enable XFR2 by default, some don’t, and some have limited options for the feature. We expect these to stabilize over the next week, as usual, and also expect memory timings to stabilize by then.

In terms of stability, we’ve observed minimal blue screens at this time. All BSODs were related to memory timings in BIOS, and should be resolved by launch or shortly thereafter. This seems to be something of a trend, but does have a rapid resolution cycle.

Recapping some considerations for testing, here:

Again, these are relative numbers – percent offsets from baseline 100%, which will be established with our Corsair Vengeance LPX 3200MHz kit. We are able to share these as AMD didn’t sample us, but we are limiting our information distribution to this data – primarily because we think it’ll help other reviewers in review planning, and potentially save folks some time. Note that the numbers are not absolutes and are only relative to one another. 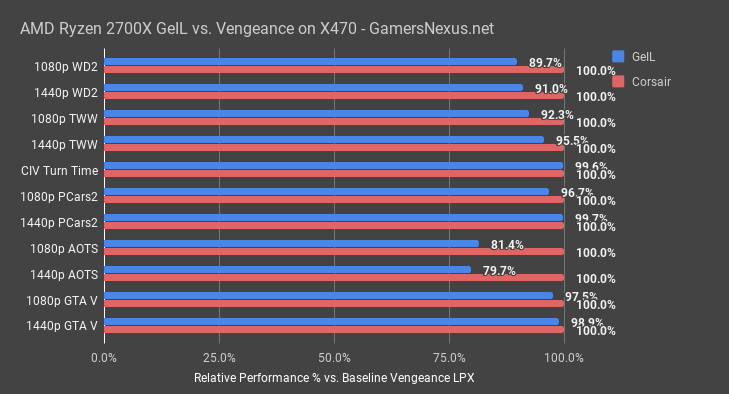 Last year sometime, we began using a kit of GeIL 3200MHz CL16 memory for all of our CPU testing. This was memory that AMD provided with the R5 CPU launch, and given a mixture of that sampling and the kit’s timings, we thought it’d be good. AMD provided that kit. Looking at some brief numbers, starting with an X470 board of unspecified make, we ended up at about 93% of the Corsair kit’s performance when using GeIL, meaning that GeIL performed at about 93% of the Corsair’s baseline 100% performance. This is for gaming only, which is more latency-intensive than applications like Blender, where memory kit matters a lot less than capacity. Our range of scaling is anywhere from 79% to 99.7%, depending on game. 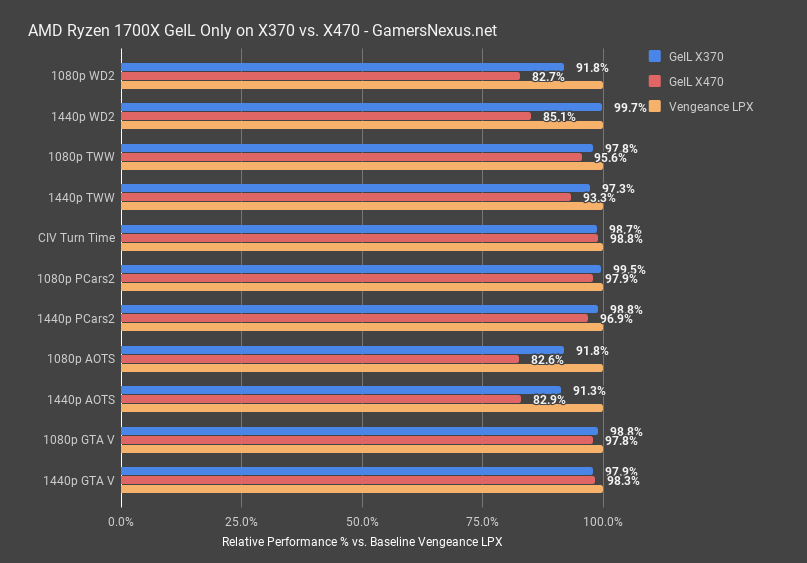 Comparing a 1700X on X370 versus X470, we noticed that the earliest EFI revision – which has since been replaced – yielded poor memory timings on the X470 platform with the 1700X. It was bad enough that even 1440p testing, which should almost always become a GPU benchmark by proxy, posted 85% of baseline performance. The X370 board under the same conditions would post 91% to 99% of baseline performance. That difference comes primarily from timing tuning and settings, as we’re just applying XMP for this simple test. It proves a point.

We’ll keep the rest of those details under wraps until our review, out of respect for other reviewers and in acknowledgement of AMD’s move away from special embargoes. For now, this is information provided to illustrate what we’ve spent the last month doing – researching fair testing conditions. Check back for more scaling information in our review.

The main point here is that we’re controlling for performance as best we can, and memory can hugely throw results. Some games, like Ashes of the Singularity, can be hyper sensitive to memory scaling.

For the more boring stuff that everyone knows by now, find the AMD Ryzen 2 specifications and prices below:

This is also an interesting opportunity to talk about shaping the media narrative and embargoes on the whole -- but check the embedded video above for that.

More soon. Check back on April 19.