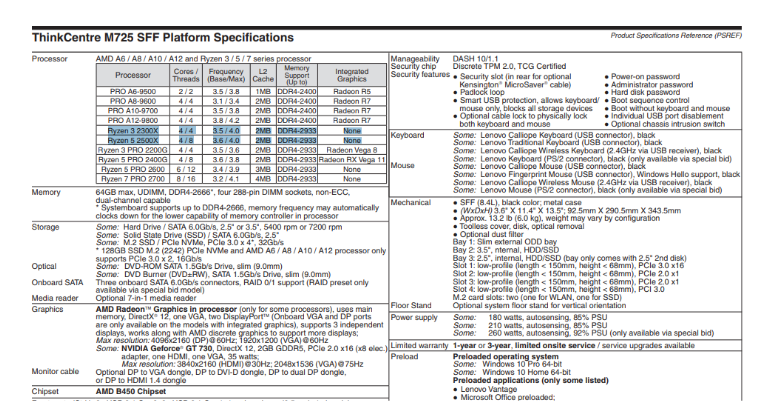 Lenovo has revealed, perhaps inadvertently, specifications for AMD’s unreleased R3 2300X and R5 2500X in new documents for their ThinkCentre M725 SFF platform. These new CPUs are successors to the R3 1300X and R5 1500X, respectively. They are based on AMD’s 12nm, Zen+ die, so they should bring all the improvements that AMD has mustered with their 2000-series Ryzen CPUs.

Looking at the specs from Lenovo, base frequency is up about 100MHz, with boost frequencies up a notable 300MHz. DRAM support is also increased to DDR4-2933.

DigiTimes reported that Taiwan Semiconductor Manufacturing Company halted production to clear manufacturing systems of a WannaCry variant virus. The impact to production will set TSMC back by 2% of its quarterly revenue, costing the company approximately $170 million in downtime.

AMD officially announced Threadripper 2 models, availability and prices this week. Threadripper 2 is based on 12nm, Zen+ cores and bring improvements similar to that of the Ryzen 2000 chips: a better voltage-frequency curve, faster cache memory, and increased DRAM speeds up to 2933MHz. Additionally, Precision Boost 2 and XFR2 are on board.

For more information, such as topology, prices, and launch dates, see our article link.

Samsung has begun production of their first consumer oriented, 4TB QLC SATA SSD. QLC has been the preeminent topic in NAND news lately, with Micron, Intel, WD and Toshiba all announcing their own QLC NAND or QLC products. Samsung’s QLC SSD will use 64-layer 1TB NAND, with alleged performance similar to that of their TLC NAND. To begin, Samsung will offer 1TB, 2TB, and 4TB options; M.2 drive are slated for a later date.

QLC NAND is promising to bring lower prices per GB over TLC and MLC, aiming to bring down the cost of terabyte SSDs, pushing HDDs further out of the client storage picture.

PC hardware, and many materials related to the manufacturing of semiconductors or semiconductor equipment, is set to rise in cost as much as 25% by the end of August. The Trump Administration is set to levy new tariffs, totaling $16 billion worth of imports, going into effect by August 23. This marks the second time the US has ignored warnings from the likes of The House of Representatives and The Semiconductor Industry Association, unilaterally  slapping tariffs against China, and further escalating the US-China trade war.

Linked below is a list of products affected by the new tariffs, should that be of interest.

NZXT announced its new “Nuka Cola”-themed cases and motherboards, falling into their new category of custom-modified cases for games. The newest H700 variant is themed for Nuka Cola, referencing Fallout (just in time for a new game), and has a motherboard with a matching theme. The case is available for $300, is limited quantity, and the motherboard covers are available for an extra $50. This isn’t functional and isn’t really a new product, but we find the effort to make cases themed for games to be a unique approach at mass producing what would otherwise be a one-off mod project.

The Flash Memory Summit 2018 took place this past week, and there were of course many announcements emanating from the event. We’ll mention a couple of the more notable ones, that will likely be more pervasive, and not limited to datacenters or enterprise.

Toshiba 3D XL-Flash: Toshiba announced their 3D XL-Flash, in what appears to be a response to Intel’s Optane (3D XPoint) and Samsung’s Z-NAND. Toshiba’s 3D XL-Flash uses Toshiba’s existing SLC flash, and uses shorter bitlines and wordlines. Toshiba’s new flash is aimed at high performance and low latency at the expense of capacity. As such, Toshiba intends to use the flash as a high performing caching option alongside its forthcoming QLC products, and potentially to replace DRAM on HDDs.

SK Hynix “4D NAND”: SK Hynix have named their new flash technology as “4D NAND”, which is a bit misleading. SK Hynix aren’t adding a 4th dimension to their NAND chips, but using a combination of  CTF (Charge Trap Flash) and PUC (Periphery Under Cell) to reduce die size, increase density, and reduce costs while maintaining competitiveness. SK Hynix intends to sample the first-gen 4D NAND in Q4 2018, in the form of a 96-layer TLC 1Tb die. Additionally, SK Hynix is readying their 4D NAND for QLC as well, slated for 2019.