This includes news on the cooler design, as well as a bit of information on power and PCB design. We also have some hard specs on the initial SKUs that were announced -- which are the NVIDIA RTX 3090, RTX 3080, and RTX 3070. There’s also some somewhat useful (if early) performance charts to go over, gaming news, and more. We’ve already published a video on this announcement on our channel, embedded below, but this written version accompanies it for supplemental information and an article recap.

*Nvidia lists power specs as “Graphics Card Power,” which isn’t necessarily the same as TGP or TDP. This number could represent GPU-only or GPU + memory, but we will validate this in our review. All numbers above are from NVIDIA’s official materials and have not yet been independently verified.

Almost immediately, the key takeaway from the presentation was how Nvidia is positioning the RTX 3000-series. Nvidia is really trying to sway Pascal owners here who elected to skip last-gen. In fact, Turing barley gets a mention in the 3000-series announcement, as it was a slow burn that never really took off the way Nvidia intended.

Positionally, NVIDIA is trying hard to bury its 1080 Ti: “To my Pascal friends, it’s safe to upgrade now,” said Jensen Huang during the keynote. Again, Turing barely got a mention in this segment, and was in fact removed from some of the charts when NVIDIA was trying to make the case for 1080 Ti upgrades to the 3000 series. 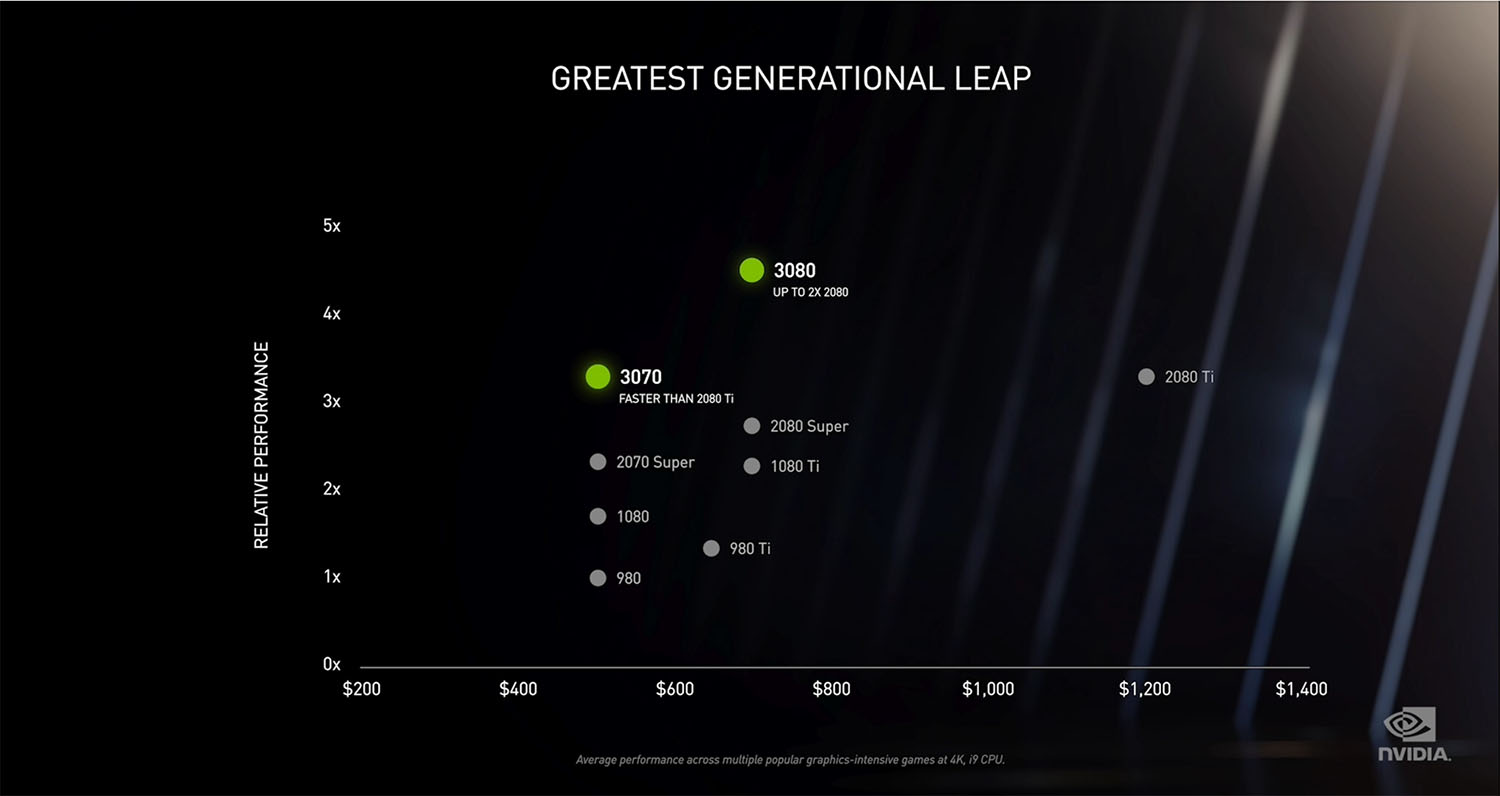 To that end, NVIDIA removed the 20 series from its charts and showed the 1080 Ti vs. 3080 with ray tracing and DLSS -- not exactly a fair comparison, and on its somewhat arbitrary chart of “average perf across popular graphics-intensive games,” it says that the 1080 Ti is doing about 1440p over 60FPS while the 3080 RT is doing over 60FPS 4K. This is with DLSS on the 3080 and not the 1080 Ti, so keep that in mind. We wouldn’t put too much stock in first-party charts just yet.

Regarding the charts, we’ll quickly point out a few things. First of all, the gap was made to look bigger than it is due to the fact that the RTX 3000 series had ray tracing and DLSS enabled, whereas with the 10-series, DLSS isn’t available -- not a surprise to anyone. Forcing ray tracing to be on kind of muddies the water here and makes the 10-series look worse than it really is. What we don’t know firmly is the rasterization relative performance between the two generations.

RTX is going to get a big push -- and likely only become increasingly more relevant in this generation -- but for those who aren’t concerned with ray tracing in games, or are playing games that don’t support the feature, rasterization performance is what we need to know in order to recommend an upgrade.

Moving back to the new specs, the RTX 3070 claims to be faster than the 2080 Ti at $500 with an October launch window. The card will come equipped with 8GB of GDDR6 (not 6X) and  claims 20.4 shader TFLOPS, 40 RT TFLOPS, and 163 TFLOPS for Tensor performance, but we don’t have further specs yet. And remember, FLOP numbers are of limited usefulness, especially within the context of marketing.

In addition to the hard specs, we’re also seeing some official numbers that can lay to rest the wild rumors that have been going around regarding the both the size and power requirements of these cards. Nvidia is listing the Total Graphics Power for the RTX 3090, 3080, and 3070 at 350W, 320W, and 220W, respectively. Similarly, Nvidia is recommending a system power of 750W for both the RTX 3090 and 3080, and 650W for the RTX 3070.

Nvidia is also listing 2x 8-pin connectors for both the RTX 3090 and 3080; meanwhile, the RTX 3070 is listed with 1x 8-pin. If you’re wondering what happened to the 12-pin connector, that still exists -- it can be seen in the renders. What is almost certainly happening is that 2x 8-pin cables will be adapted into a single 12-pin. We’ll know more when we can physically test the cards.

Additionally, there’s a hidden caveat moving down the specs list. For Nvidia NVLink (SLI Ready), you’ll notice the feature is supported on the RTX 3090; however, for both the RTX 3080 and 3070, Nvidia only lists a dash. We assume this dash to mean no. This is interesting, in that Nvidia seems to be pushing multi-device readiness and communication via a bridge to the most expensive cards.

Thus far, we also know that NVIDIA is claiming a 1.9x performance / watt improvement for Ampere versus previous generations. For ray tracing performance, NVIDIA is dunking on Turing, as you can glean from the following chart.

Turing is baseline 1.0x, while Ampere is showing about a 60% to 100% uplift with Blender cycles, Autodesk Arnold, and V-Ray, and it’s showing gains in the 50%-and-up range for gaming applications, including Minecraft RTX that we recently tested. Now, that said, that’s with ray tracing enabled -- if RT doesn’t matter to you, the gains may be smaller for rasterization only. We’ll have to see.

Rounding out the basics are some surface-level specifications for Ampere: 2nd gen RTX, 28B transistors for the densest Ampere GPU, a custom 8nm manufacturing process from Samsung, and Ampere performing 2 shader calculations per clock (versus 1 per clock on Turing). These are all points we’ll need to go back over once we have explicit details on the Ampere architecture. 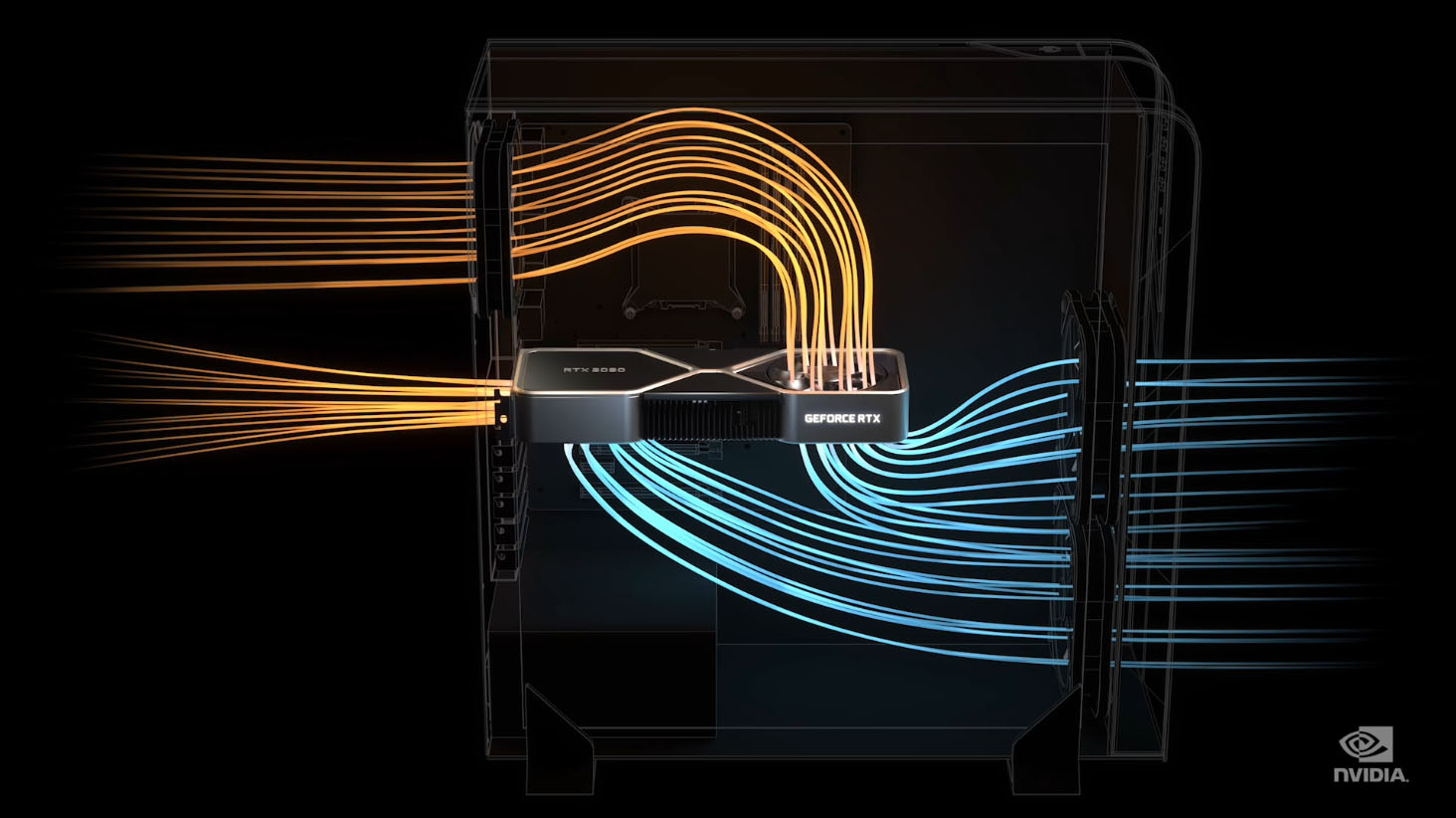 The most interesting aspect of this set of cards, from a testing standpoint, is the new cooler design. NVIDIA published a rendered explosion of it, showing a backplate that should hopefully make use of thermal pads to leverage the area, then the PCB, which has been cut down in size for this generation.

Then there’s a set of heatpipes -- it looks like 4 flat pipes in the render, but that might just be art -- which then round-out toward the end. After this, there are two separate fin stacks that look to be taller in size, bridged by the heatpipes in between. After that, it’s just the shroud.

For at least the 3070 model, we noticed that the power connector is positioned in the center of the card. This is a design move that Nvidia also pulled with the RTX 2060 FE, and it was an atrocious design in terms of dismantling the card. We’d hope that Nvidia’s mechanical engineers took this into account for this generation, but we’ll see.

With its new cooling design, Nvidia is staking claims to 55% more airflow, 3x quieter, and 30% more efficient compared to previous designs. While we should be able to test the airflow claim, the 3x quieter claim will be tricky. It’s hard to quantify subjective multiples of volume. There’s also things like acoustic power (dB) and perceived noise to the human ear, and they’re not mutually congruent. As usually, we’ll dive more into acoustic metrics and claims when we get the cards.

Regarding the fans on the cooler, there’s two fans, with one fan on the backside pulling air in through the front and another fan exhausting (pushing) the warmed air out the back. This design means that air comes in the underside of the GPU and will be dumped out the back of the card and into the CPU cooler tower/finstack (if you have one) in a standard ATX configuration.

This may have just completely changed the value and argument of closed-loop liquid coolers over CPU tower coolers, as you all of a sudden have a CPU cooler that will have to deal with a higher effective ambient temperature, thanks to the GPU exhausting straight into it. This is an aspect of the cooler we intend to test exhaustively to see what impact this will have on the air vs liquid argument.

That said, keep in mind that there will still be AIB partner models with custom coolers, with more traditional designs.

Rounding out the cooling discussion is a few points about the PCB design and VRM. The reference PCB is compact to fit the cooler, and will be running an 18-phase overall design -- some of that is for memory, clearly. The VRM flanks the memory modules on either side, so we have a few suspicions about where hotspots will arise. The memory modules are oriented so that 4 are left of the GPU, 4 are right of the GPU, 3 are above the GPU, and 1 is below it. We can also see where the VRM flanks the top and bottom memory modules.

It seems one of Nvidia’s next big pushes will be one of latency. This push seems to be two-pronged. One part of the latency discussion is certainly about pushing ever higher frames per second, but the other part is Nvidia’s new application, Nvidia Reflex. Both of these points tie into Nvidia’s push to bring 360Hz G-Sync displays to market.

With regards to Nvidia Reflex, Nvidia claims this ‘improves reaction time’ and showed this with Valorant, Destiny 2, and Fortnite. While Nvidia is being vague about its terminology and metrics here, we think the general gist is improving total system end-to-end latency. Nvidia Reflex is another point we’ll have to revisit when we have more information, but it’s something Nvidia atleast thinks will be a highlight for this generation.

The latency battleground isn’t a new one, as AMD has had similar technologies in the past but weaker marketing behind it. Latency becomes more important as rasterization performance scales ever upward, and raw FPS becomes less relevant.

Finally, a few more quick points. Nvidia once again showed The Marbles at Night demo, only this time there was no rasterization; the Marble demo was entirely path trace, all real-time, and the ray tracing was processed concurrently with the shading. Nvidia showed off new lighting effects, specifically aerial and spherical lighting. There was no pre baking at all in the demo, which means nothing was pre-rendered, lighting wasn’t pre calculated, etc.

Furthermore, everything is claimed to be dynamic. The dynamics here point towards things like diffused global illumination and volumetric rendering in real time, among other technologies.

Also, it appears RTX Voice has been rolled into Broadcast, and it will get a bigger push with the RTX 3000-series. Broadcast will offer technologies such as a green screen effect, where it will presumably trace the user and their chair and replace the background. These are going to be more streamer target utilities, but it’s something Nvidia plans to introduce more of.

Nvidia also introduced Nvidia Omniverse Machinima, which it says is a “RTX-powered mixer app for video game storytelling.” While telling stories with video games isn’t new, maybe it’s something new to Nvidia. We’d like to see Jensen Huang’s reaction to Red vs. Blue. At any rate, Nvidia’s Omniverse Machiniam will feature game libraries and can do AI pose simulations through a webcam to effectively do motion capture without motion capture equipment, which is interesting. The demo showed effects like particles and fluids, and there’s supposed to be a beta in October.

Overall, it reminded us of Ansel, where it’s a niche application that some people will use, rather than being a wide market application.

There’s more discussion on our YouTube channel, where we’ve now produced one video on the launch specs and another on RTX 3000 custom cards.