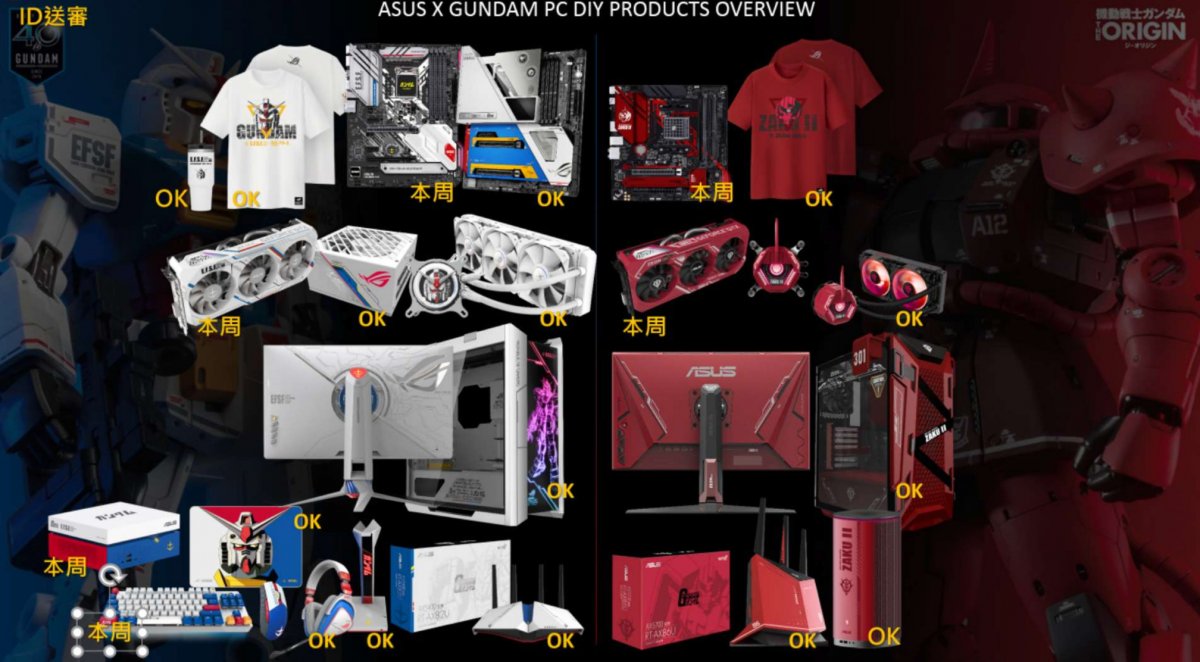 It’s been something of a busy week in hardware and enthusiast related news this past week, even with Apple’s iPhone event and Amazon’s glutenous Amazon Prime Day sales seemingly dictating part of the news cycle. Still, we’ve got a few stories worth talking about, and as ever, we’ve been busy with other coverage here at GN.

It looks like EVGA is among the first vendors to attempt to address the power limit issue for overclockers looking to push the RTX 3080 ever further, as the company has released a new beta VBIOS that raises the power target. Additionally, there are the usual rumblings in the memory market about price drops, a China-designed 7-nm class chip, an interesting vector supercomputer headed for Japan, and Gundam parts branded by ASUS.

At GN, we’ve been continuing our RTX 30-series coverage with a review and teardown of the ASUS RTX 3080 TUF OC, and we looked at Nvidia’s Reflex suite, including its Latency Analyzer and Reflex Low Latency Mode.

As usual, find the news recap and video embed below.

A recent DigiTimes reported, predicated on industry sources, alleges that NVIDIA may be looking to move Ampere GPU production to TSMC’s 7nm node from or in addition to Samsung’s 8nm node in 2021. This is allegedly for risk management and diversification of supply, and should also be a clean transition as the companies already have a long-standing working relationship together on previous GPUs. TSMC needs to keep its 7nm node filled through 2021 as it starts to transition away from it, so the deal would be symbiotic for NVIDIA and TSMC. This is currently in ‘rumor’ status, but would make sense.

According to a report from TrendForce, the memory market (that is, NAND and DRAM) is still in a persistent state of oversupply as we head into the fourth quarter. While TrendForce notes that smartphone manufacturers are moving to hoard memory and capture market share that Huawei has forfeit, it’s not enough to offset the waning demand from the server market. Barring a sudden upswing, the memory market looks to remain flat throughout 4Q2020 and could see a 10% decrease in average memory ASP QoQ.

TrendForce is reporting that in regards to DRAM, mobile and server DRAM are seeing the most fluctuation at the moment. Mobile DRAM could see an ASP reduction by as much as 5% QoQ, while server DRAM stands to drop even further, by as much as 15%. As for NAND, TrendForce notes that customers are currently sitting on high levels of inventory and that NAND wafer production is continued to rise, both of which seem to be exacerbating the oversupply issue. There’s also a marked decrease in demand from server vendors in regards to SSDs, and the overall NAND flash ASP could drop by as much as 10% by the end of 4Q2020.

Looking into 1Q2021, the DRAM market looks to be headed to a bit of a rebound, thanks in part to seasonal demand from vendors looking to restock. Meanwhile, NAND is expected to continue to drop, with another anticipated 15% decrease in ASP throughout 1Q2021.

EVGA recently trotted out a new BIOS aimed at increasing the power target for its RTX 3080 FTW3 Ultra cards. The BIOS is specifically for the extreme overclocking crowd and offers little benefit or use for those not interested in an XOC profile and exotic cooling. The BIOS is currently in beta form, and EVGA is listing an 850W PSU per the minimum requirements.

Users over on the EVGA forum took the beta BIOS for a spin and noted that it seemed to increase the power target from 400W to 450W, which could theoretically help remove the power limit as a bottleneck when overclocking.

In recapping our own extreme overclocking efforts with the RTX 3080 FTW3, we ran a custom vBIOS that removed the power limit and led to a brief world record score, and we noted some issues with being voltage limited and learning how the new GDDR6X memory modules would behave in sub-zero environments.

A Chinese ASIC IP and design firm, Innosilicon, has completed the tape-out for China’s first chip using China’s own Semiconductor Manufacturing International Corporation’s (SMIC) N+1 process node. SMIC’s N+1 process is currently thought of as something of a premature 7nm FinFET manufacturing process, and while it may be considered 7nm-class, it’s still not ready for volume production, and we don’t have any indication as to how it would compare to TSMC’s pure 7nm nodes, which currently lead the way.

However, SMIC’s N+1 process and Innosiclion’s successful tape-out mark a significant milestone for China and its march towards domestic semiconductor independence. SMIC’s N+1 process is the latest in the company’s roadmap, following its 14nm and 12nm process nodes. Currently, SMIC’s N+1 and N+2 nodes are non-EUV, making use of DUV lithography. While it seems SMIC can still purchase and maintain DUV equipment from ASML, it’s unclear if it will be able to get ahold of ASML’s TwinScan NXE EUV systems, due to being on the US Entity List. ASML is currently the only provider of EUV lithography equipment, and if SMIC hopes to advance its process nodes to a point of competitiveness with TSMC and Samsung, it will need access to ASML’s latest machines.

The Japan Agency for Marine-Earth Science and Technology (JAMSTEC) is set to upgrade its “Earth Simulator” supercomputer, which has existed since the early 2000s and is aimed at researching environmental changes and natural disasters. To date, Earth Simulator has spanned across three iterations, with Earth Simulator 3 having been brought online in 2017. The presumed Earth Simulator 4 (the name isn’t official yet) is slated to come online in March 2021 and will be delivered by NEC.

The next Earth Simulator supercomputer will be built on NEC’s latest SX-Aurora Tsubasa platform, specifically the SX-Aurora Tsubasa B401-8, which is a vector supercomputer rack. NEC’s SX Aurora architecture is based around a vector processor (not a scalar processor), and NEC builds them as a PCIe card, which it then calls Vector Engine cards. Each VE card comes with 8 or 10 cores, depending on the VE card type, and the B401-8 can host up to 8x VE cards.

However, B401-8 is unique in that it offers a hybrid computing model consisting of a vector host server that powers the vector engine. The vector host server will use AMD Epyc CPUs, and while NEC doesn’t specify which models it will support, we’re assuming it’ll be Epyc Milan, based on Zen 3. The B401-8 also makes use of Nvidia-Mellanox InfiniBand switches and will support Nvidia’s A100 GPU accelerators.

When we reviewed the Yeston RX 580 Cute Pet card and the Cute Pet PC case, we remarked that the reason they were so interesting was simply for their avoidance of standard design approaches. Video cards and cases don’t have to be cat-themed to be unique -- although that’s obviously better -- but just anything other than standard black-and-red gamer themes would be a nice break.

According to leaks on twitter, it seems that ASUS may have picked-up on this concept. ASUS previously made an Assassin’s Creed video card, which was a good use of licensing to give something a unique spin, and now it’s working to make a Gundam-branded set of hardware. We reached-out to ASUS and received confirmation that the leak is accurate and that the company is, in fact, making these parts for the Asia-Pacific region. The company has not yet officially discussed plans for the Americas or Europe.

In the leaked images, ASUS is working on a Gundam-branded Extreme-series motherboard, AIO, case, monitor, keyboard, mouse, headset, and router -- assuming this is real, although we could see this particular leak being faked given how much branding there is. There are two sets of products: There’s the Char’s Zaku red-and-black line, ironically enough, and the white-yellow-blue RX78-II.

This is exactly the type of different branding we were asking for in the Cute Pet reviews. The Helios case certainly looks better this way than the one we reviewed.

Arctic informed GamersNexus of an update to its Liquid Freezer II coolers. We highly recommended the Liquid Freezer II in our review for its thermal performance, but we spent some time criticizing its installation procedure for being particularly painful on AMD. The process requires a third hand and some patience, and was our primary critique of the cooler. Fortunately, it’s entirely solvable with additional mounting hardware and doesn’t need an actual product-level rework.

Arctic says it will be improving Ryzen cooler mounting and also better center the coldplate on the IHS. The upgrade will also provide Socket AM3+ compatibility, for anyone who wants that.

It looks like Arctic is changing its design so that the mounting clips install to the AM4 backplate rather than the pump housing. This should make it much easier to install.

Speaking of Arctic, we have their new Arctic Freezer 50 air cooler to review soon. The cooler is a $60 euro dual-fan, dual-tower air cooler. The cooler is mostly enshrouded in plastic, but promises more guided airflow by nature of the enclosed design. The cooler combines a 120 and 140mm fan which it says shrinks the installation height; at 166mm tall, it’s still in excess of what many of the smaller ATX cases will fit. Socket compatibility is listed for LGA122, 115X, 2066, 2011-3, and AM4. RAM clearance is listed at 37.5mm, with a 6-year warranty for the unit.