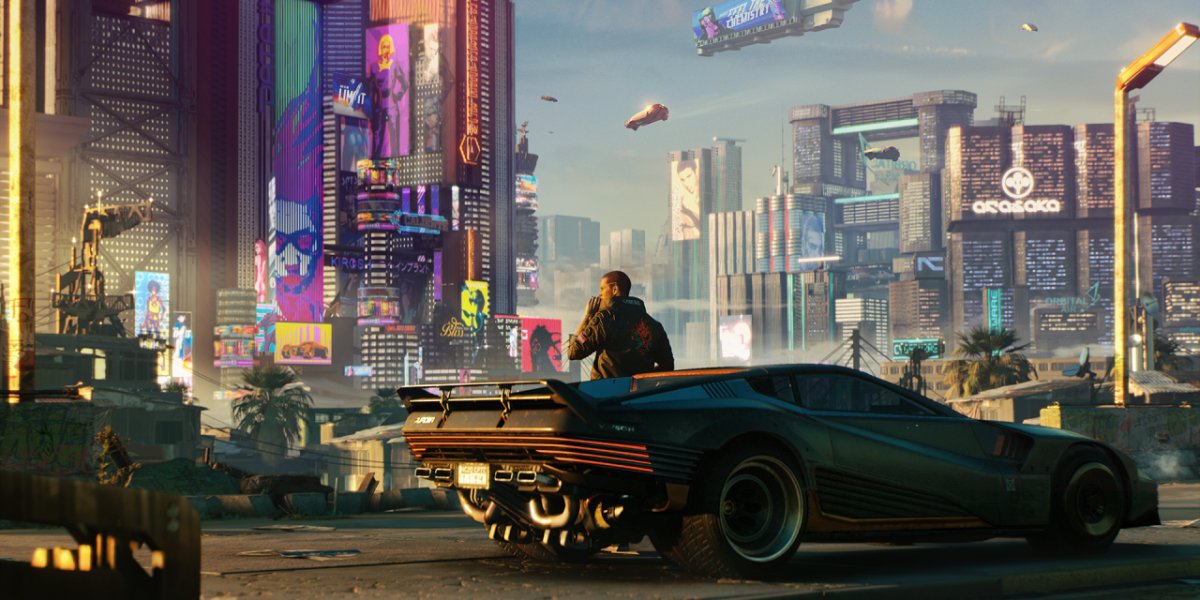 The first Cyberpunk 2077 class-action lawsuit has landed, and it’s likely only the first of many. As previously reported, many more lawsuits are currently brewing over the way CD Projekt handled the Cyberpunk 2077 launch.

CD Projekt has since stated it has received notification of the law suit, and plans to vigorously defend itself.

According to CDPR, Rosen Law Firm has not yet stated the damages sought.

10:50 | Intel Being Pushed to Decouple Chip Design and Manufacturing

According to a report from Reuters, activist hedge fund group Third Point LLC is warning Intel that it needs to consider some drastic changes to its business.

“Without immediate change at Intel, we fear that America’s access to leading-edge semiconductor supply will erode, forcing the U.S. to rely more heavily on a geopolitically unstable East Asia to power everything from PCs to data centers to critical infrastructure and more,” says Third Point Chief Executive Daniel Loeb, in a letter to Intel.

Third Point LLC is based in New York and has a stake that Reuters suggests is worth $1 billion. The letter of concern comes as Intel has long since ceded its manufacturing crown and leadership position to TSMC and Samsung, and continues to lose client and data center market share to AMD. The letter also expresses concern that Intel is currently unable to compete with Nvidia in the realm of high performance compute and AI.

Third Point goes on to urge Intel to “explore strategic alternatives,” with one alternative being to spin off its fabs. Third Point also advises Intel to divest itself of massive acquisitions, some of which have been more questionable than others.

Spinning off its fabs is something that the Intel higher ups have long been opposed to, as Intel’s manufacturing prowess has always been the jewel in its crown. Intel started as a manufacturing company more than a chip designer, if you look at the history of its founders; however, in recent years, as silicon continues to shrink and chips become more specialized, Intel hasn’t been able to keep pace. The idea behind decoupling Intel’s chip design and manufacturing process would be that it would allow for Intel to focus on developing the best chips possible, without worrying about manufacturing hurdles. The fabs could then go forth to pursue manufacturing for Intel and other companies.

In the current landscape, heavyweights like Apple, Google, and Amazon are all developing their own silicon designs. These designs are then built by TSMC or Samsung, bypassing Intel altogether. This is also a point highlighted by Third Point, who says Intel needs to address this shift in the market and capture the business.

Industry prophets Digitimes, based in Taiwan, have published a reported suggesting that Sony’s PlayStation 5 sold 3.4 million units in its first month, further stating that the company expects 18 million sold through 2021. Sony publicly stated that this was its most successful console launch ever, in terms of volume, and that statement aligns with Digitimes’ numbers. For perspective, the Playstation 4 sold 2.1 million units between November 15th, 2013 and December 3rd, 2013. For the same period, the PlayStation 5 has outpaced the PlayStation 4 even in spite of the insatiable demand -- like every other industry has faced this year, including our own Disappointment PC T-shirts.

XDA reported that Sony still hasn’t launched the PlayStation 5 in India, highlighting that there’s still plenty of room for a sales boom as the consoles roll-out globally.

Steam’s “Best of 2020” report focuses on the top games by revenue in a few different categories, and some of the takeaways are impressive, or in the least, interesting as an indicator to how the games market has changed over the last 10 years. This list is also a great source of potential recommendations for games to try out, if you’re looking for new ones.

Starting with top sellers, Red Dead Redemption II landed in the top list (“Platinum”) for gross revenue in 2020. Steam ranks these by record label-like categories, like Platinum and Gold, but we’re not sure what the qualifications are to reach each label. Alongside Red Dead 2 was 2018’s Monster Hunter World, which saw a resurgence this year. Perhaps most impressively, Twitch flavors-of-the-year Fall Guys and Among Us both landed on this list, despite being significantly cheaper per unit sold than many of the other games. This is a combination of high volume -- in the case of Among Us especially -- and of microtransactions. GTA V also manages to hang onto this category, despite being a 2015 game from 2013 before that. Cyberpunk 2077 slots in at the end of the year, still making Platinum, and based on Red Dead 2’s positioning and EOY 2019 launch, we’d expect Cyberpunk may be the top seller in 2020. Below these, in gold, top performers were Phasmophobia, ESO, Halo Master Chief Collection, Civ VI, Bannerlord, and others. Steam also includes Silver and Bronze, if you’re curious to learn more.

For new releases, Flight Sim is a top performer by gross revenue for games launched in 2020, alongside by Temtem, which is sort of a Pokemon-inspired MMO creature collector. Command and Conquer Remastered also made the list, a favorite of mine from decades ago.

Most Played goes to GTA V in number 1, impressively maintaining top ranks for peak concurrent players. You can visit Steam or the link in our show notes document to check out the rest.

It seems a new bug in the Epic Games Store Launcher has been unearthed, affecting CPU usage in particular.

A post on reddit seems to have originally cast a light on the issue, with several other users chiming in with their own experience. It seems that, for some reason, the Epic Games Store Launcher was running some process in the background that was causing CPU usage to spike, and the process seemed to have a bigger impact on Ryzen CPUs.

Reddit user Neoncarbon reported that their Ryzen 7 5800X temperatures went from 50C to 37C just by disabling the Epic Games Launcher. HotHardware reports that they were able to verify the issue with one of their testbeds, where the temperature on their liquid-cooled Ryzen 9 5950X sitting at 53C, with the app just idling.

HotHardware also noticed some suspicious data collecting processes running in the background, that may or may not be worth worrying about. As of this writing, Sergiy Galyonkin, who works for Epic Games, has stated a partial hotfix is available. It seems a full solution is pending.

Silverstone is set to release an interesting new SSD enclosure, notable for supporting the USB 3.2 20Gbps spec. Other USB 3.2 enclosures exist, but the ones we could find all support the 10Gbps version of the spec -- like the ASUS Arion NVMe SSD enclosure. The Silverstone MS12, as it’s named, is a USB 3.2 Gen 2x2 Type-C to NVMe M.2 SSD enclosure.

The idea, it seems, is to repurpose NVMe M.2 SSDs into an external SSD via the enclosure, which operates via the -- takes deep breath -- USB 3.2 Gen 2x2: SuperSpeed USB 20Gbps Type-C interface. That equates to 2.4 GB/s of theoretical bandwidth.

This would undoubtedly be in the “wall of many things” that Silverstone has at CES each year, but without the show happening in person, we’ll be hearing about its many accessories and smaller items scattered over the next weeks.

We recently discussed that Intel’s upcoming Sapphire Rapids SP parts may go the MCM/chiplet route, as suggested by what appeared to be an early engineering sample spotted over at ServeTheHome.

Now, it seems that the future Xeons will offer support for HBM, perhaps in an on-package configuration. In a new Architecture Instruction Set Extensions and Future Features Programming Reference document, which is aimed at developers, there’s a new section addressing certain high-bandwidth memory errors. The document lists two check errors for HBM: “0220H - HBM command / address parity error” and “0221H - HBM data parity error.” Both of these relate to how the integrated memory controller on the CPU looks for data errors with HBM.

Stacking HBM on a CPU die isn’t altogether new -- Fujitsu's A64FX inside the Fugaku supercomputer stacks 32GB of HBM2 on the package. However, it would be a first for Intel’s Xeon line.

As a reminder, Sapphire Rapids is part of Intel’s upcoming Eagle Stream server platform, and the chips would succeed Ice Lake-SP parts, which haven't made it to market yet. Ice Lake-SP was originally planned for a limited 2019 launch, but was then pushed back to the first half of 2020 before being delayed into 2021. At this point, Intel isn’t expecting volume production for Ice Lake-SP to ramp until 1Q21.

This particular rumor comes courtesy of MyDrivers, and was picked up by Tom’s Hardware, who also says to have verified with their own sources and validated at least part of the story. As originally reported, there’s an apparent shortage gripping Intel chipsets, with B460 and H410 being particularly affected.

The report claims that vendors such as Asus, MSI, and Gigabyte have received the last of B460 and H410 chipset shipments for the year, and that inventory levels for January aren't expected to increase. The report notes that price hikes are probably coming down to consumers for B460 and H410-based motherboards for the first quarter of 2021. It seems for the time being that Z490 is seeing stronger inventory and shipment levels.

While we’re flagging this as a rumor, it’s likely very credible; we’re just not able to verify it at time of publishing.

In a recent spec listing by Lenovo, the company announced its Lenovo Legion R5 28IMB05 systems with 10th Gen Intel CPUs and AMD or NVIDIA GPUs. The point of the post was to outline the configuration options. The listing, which remains live at time of filming, notably indicates the RTX 3050, RTX 3050 Ti, and RTX 3060, double-confirming what AIDA64’s update log confirmed a few weeks ago. The spec sheet points toward 4GB of GDDR6 on the RTX 3050, 6GB of GDDR6 on the RTX 3050 Ti, and curiously, 12GB on the RTX 3060. We’re not sure if that’s a mistake or if NVIDIA really is planning to launch with more memory on the 3060 than the 3070. We’d assume it’s a mistake, but we’re not sure at this time.

The main reason that this is all interesting, though, is that the traditional lowest SKU -- the XX50 unit -- is now renamed from GTX to RTX. The GTX branding may be retired or shunted down lower in the stack, but the takeaway is that even an RTX 3050 will likely have some level of RT hardware and RT support.