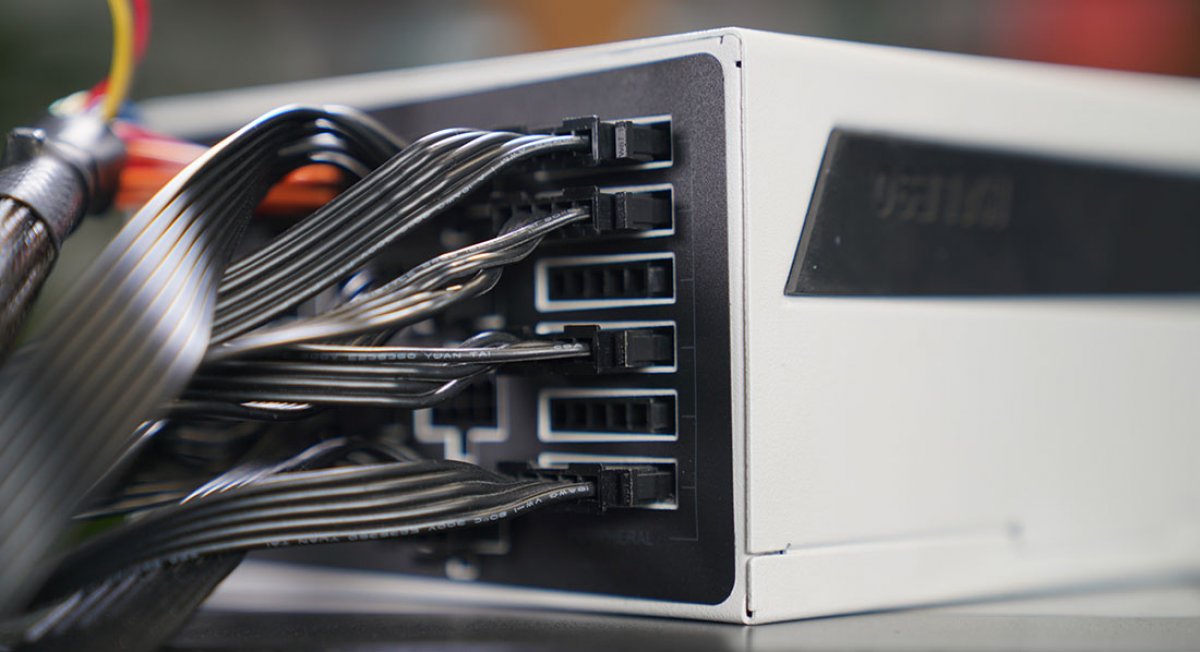 This week, we have news talking about NVIDIA's FE card exemptions to the LHR changes. We also see AMD and GlobalFoundries reveal a newly amended WSA, which allows for AMD to contract any chip from any manufacturer, while still committing to a certain capacity agreement from GloFo.

At GN, we recently took an extensive look at Dell’s G5 5000 Gaming PC in a two part series (See part 1 here, and part two here). We won’t spoil it for you, but there’s liberal use of the words like “garbage” and “dumpster fire.” We also announced new GN mousepads, which you can grab here.

Saving this one for the video!

We reported earlier this week on NVIDIA’s new “LHR” GPUs, which carry with them a new silicon variant for reduced hashrate when mining Ethereum. As discussed in our news video, there will be two immediate options of RTX 3060 Ti, 3070, and 3080, with both the LHR and non-LHR overlapping for an indeterminate period. The 3080 Ti and 3070 Ti will only ship in LHR versions for at least partner models, but won’t host the LHR branding mandated on the other cards. You can watch our other news video for this.

Now, there’s news from a PC Gamer follow-up covering NVIDIA’s FE cards. NVIDIA told PC Gamer that “Founders Edition is a limited production graphics card sold at MSRP. At this point, we don’t have plans to make versions with LHR.”

Although the FE cards haven’t been available as frequently as partner models, we have seen The Chosen One -- that’d be Best Buy -- still occasionally stocking them.

It seems Intel is keen on getting its partners to adopt its ATX12VO standard for its upcoming Alder Lake CPUs, which will require LGA1700 motherboards. If this is your first time hearing about Intel’s ATX12VO, we have a primer on it you can check out.

Though as a brief recap, Intel’s ATX 12VO is a new ATX standard that eschews the 24-pin motherboard connector in favor of a 10-pin connector. It does so by shedding the 5V and 3.3V rails in the PSU, and offloading 5V and 3.3V DC-to-DC conversion to the motherboard. Intel states that this makes for more compact PSUs -- although that comes at the cost of bigger motherboards, as the DC conversion components require extra space -- and can achieve higher efficiency with idle or low-load PCs.

It seemed that ATX12VO was mostly aimed at OEMs, but then we saw ASRock introduce a consumer orientated ATX12VO motherboard, in the form of the ASRock Z490 Phantom Gaming 4SR. The biggest problem at the time was there were no PSUs to go with it. According to a friend of the site, der8auer, PSU makers are coming around. Der8auer spoke with PSU makers such as Seasonic and Corsair, and received news that they were working on consumer models adhering to the ATX12VO standard, and that Seasonic was already working to get their ATX12VO PSUs certified by Intel. Der8auer also spoke to a couple of motherboard makers, such as MSI, but wasn’t able to get any definitive information.

According to a document obtained by VideoCardz, Intel notes that in order to get ATX12VO certified ADL-S systems to market on time, OEMs need to be working with PSU and motherboard vendors by the end of May 2021. Alder Lake S is slated to hit the market in either late 2021 or early 2022, and Intel noted that PSU makers need 4-5 months to ready for mass production, and motherboard vendors need 4-5 months to validate their boards.

Igor of Igor’s Lab recently reported on the upcoming Intel Xe-HPG GPUs in the DG2 class, noting that he had uncovered a slide indicating 5 different SKUs of the GPU. This is firmly in rumor status, but we still wanted to bring it up.

Igor’s table points to SKUs by the name of DG2 SKU1-SKU5. Either these names will be more refined later, or Intel has taken a very literal approach to fixing its chaotic naming scheme on CPUs. We look forward to future Intel i7-SKU1 and Intel i5-SKU2 CPUs.

The table lists the packages as ranging from 96 EUs up to 512 EUs. Like AMD and NVIDIA, Intel has its own language for cores and core containers, and theirs is “Execution Unit.” This can be thought of as similar in concept to an SM or a CU. Package sizes are rumored at 29x29mm up to 43x38mm, and a leak from Videocardz points toward GDDR6 inclusion on a DG2 with 384 EUs.

Rumored memory capacities range from 4GB to 16GB, with desktop power limits still unfinalized. You can check Igor’s Lab for more details on this set of rumors.

Intel should start showing motivation to launch these parts between 4Q21 and 2Q22, and likely they’ll be released scattered over a few months.

AMD has made public its newly amended Wafer Supply Agreement with GlobalFoundries, which outlines the relationship that the two companies will have over the next few years. Most notably, the newly amended WSA drops any and all exclusivity deals that AMD and GlobalFoundries previously held.

“The A&R Seventh Amendment also removes all prior exclusivity commitments and provides the Company with full flexibility to contract with any wafer foundry with respect to all products manufactured at any technology node,” according to the new amendment.

That said, AMD is still agreeing to purchase a minimum of $1.6B worth of wafers from GlobalFoundries through 2024. The agreement calls for GlobalFoundries to allocate a certain amount of fab space specifically for AMD, and AMD is required to pay for that capacity, regardless of how much it actually needs. The new amendment will carry the WSA through December 31, 2024.

Among other things, it seems retail bundling is a key contributor. Users in the PC DIY space know this move all too well: Retailers forcibly bundling components like motherboards or PSUs with things like graphics cards. In recent months, Newegg has been especially guilty of this, coupling all graphics card sales to bundle “deals'' in its Newegg Shuffles.

Retailers have always done this to a certain extent, with the key difference being the market wasn’t subject to a global hardware shortage and users had a choice in the matter. And while companies will say this tactic is meant to deter scalpers and miners, it’s also a sales tactic, and frankly, retailers do it because they can get away with it. It also has a knock-on effect on the secondhand market, as consumers will buy the bundles and then immediately sell the unwanted components.

As Tom’s Hardware points out, most motherboard vendors will do just fine, as they're able to offset the losses with graphics card sales. Still, it’s an interesting side effect of retail combo deals.

On the list of things Microsoft should have killed 10 years ago, Internet Explorer sits right at the top. Microsoft has announced that in 2022, IE 11 will officially be retired and no longer supported. This move has been a long time coming, and was preceded by several smaller moves to begin a phase out of the legacy browser.

One of the biggest reasons IE 11 is still around is legacy support: Many websites, applications, and intranets are still based on Internet Explorer and older Microsoft web technologies, like ActiveX. In fact, according to a survey on behalf of Microsoft, enterprises have an average of 1,678 legacy applications requiring IE compatibility. However, Microsoft introduced Internet Explorer mode for Edge, Microsoft's newer Chromium-based browser, that allows for legacy functionality.

So then, as far as Microsoft is concerned, the path forward is Microsoft Edge. The writing has been on the wall for IE for some time. Microsoft has already ended support for the browser in the Microsoft Teams web app, and Microsoft is also ending support for IE in Office 365 services.

While Microsoft is announcing the retirement of IE, there are a few areas out of scope for this announcement. Notably, the entire Windows 10 Long-Term Servicing Channel (LSTC) branch is unaffected, as is the MSHTML/Trident engine, including WebOC. Microsoft intends to support IE Mode in Edge through at least 2029, and it will support IE 11 in its LTSC branch through 2029 as well.

In the realm of rumors this week, there was speculation that a new B2 stepping for AMD’s Ryzen 5000-series CPUs was an identifier for a Ryzen 5000 refresh, of which many thought would take the form of a Ryzen 5000XT line-up. That’s not the case, and even AMD has confirmed this. Current in-market Ryzen 5000 chips carry a B0 stepping -- or revision, in AMD’s terminology --, but AMD is planning to transition the family over to the newer B2 revision.

The new B2 revision remains a bit of a mystery, but AMD confirms that there is no enhanced performance or functionality tied to the new revision.

AMD told Polish site benchmark.pl the following, translated via Google: “As part of our continued effort to expand our manufacturing and logistics capabilities, AMD will gradually rollover AMD Ryzen 5000 Series Desktop Processors to B2 Revision over the next 6 months. It does not bring functionality or performance improvements, and no BIOS update is required.”

We’ll have to wait awhile to assess any impact the new B2 revision has on availability and production, according to AMD’s 6-month timeline.

As spotted by Verdict, a new research paper published by Nature (and paywalled) outlines some new ground being broken in terms of semiconductor manufacturing materials. The research includes scientists and engineers from MIT, Berkeley, the National University of Taiwan, and TSMC.

Unfortunately, we aren’t able to dig into the paper properly, but the abstract outlines the use of semi-metal bismuth (Bi) as contact electrodes, rather than silicon, to greatly reduce the contact resistance and improve current delivery in two-dimensional transistors. The research is being heralded as a way towards 1nm-class chips, and follows shortly after IBM announced its own breakthrough with 2nm semiconductors.

According to a new complaint filed by the FTC, Frontier Communications has repeatedly advertised and charged consumers for broadband speeds it can’t deliver, and as such, is in violation of several sections of the FTC Act and several local state laws. Now, Frontier Communications is on the business end of a lawsuit from the FTC, and joining the FTC are six states: Arizona, California, Indiana, Michigan, North Carolina, and Wisconsin.

The FTC complaint alleges that Frontier grossly misrepresented the speed tiers of its DSL service to 1.3 million customers spanning 25 states, and also failed to clearly communicate the limitations of DSL. ISPs often obscure broadband speeds with phrases such as “up to,” or “as fast as.” Furthermore, the FTC alleges that Frontier has billed its customers for DSL speeds that it wasn’t able to deliver and consumer’s weren’t actually getting.

Like most ISPs, Frontier enjoys a regional monopoly on its services, and has continued to find itself entangled in litigation over its business practices. And, like most ISPs, it emerges relatively unscathed every time. Frontier most recently settled a lawsuit with the State of Wasington over much the same issue: Misrepresented broadband speeds and hidden fees.

The problem, as ever, is that the FTC has limited authority when it comes to ISPs; in order for the FTC to intervene, an ISP has to be in clear violation of the FTC Act.

“As important as this case is, it also shows why the FTC can never fully fill the regulatory gap left in the wake of the repeal of Net Neutrality at the FCC, the expert agency on telecommunications services,” said FTC Acting Chair Rebecca Kelly Slaughter.