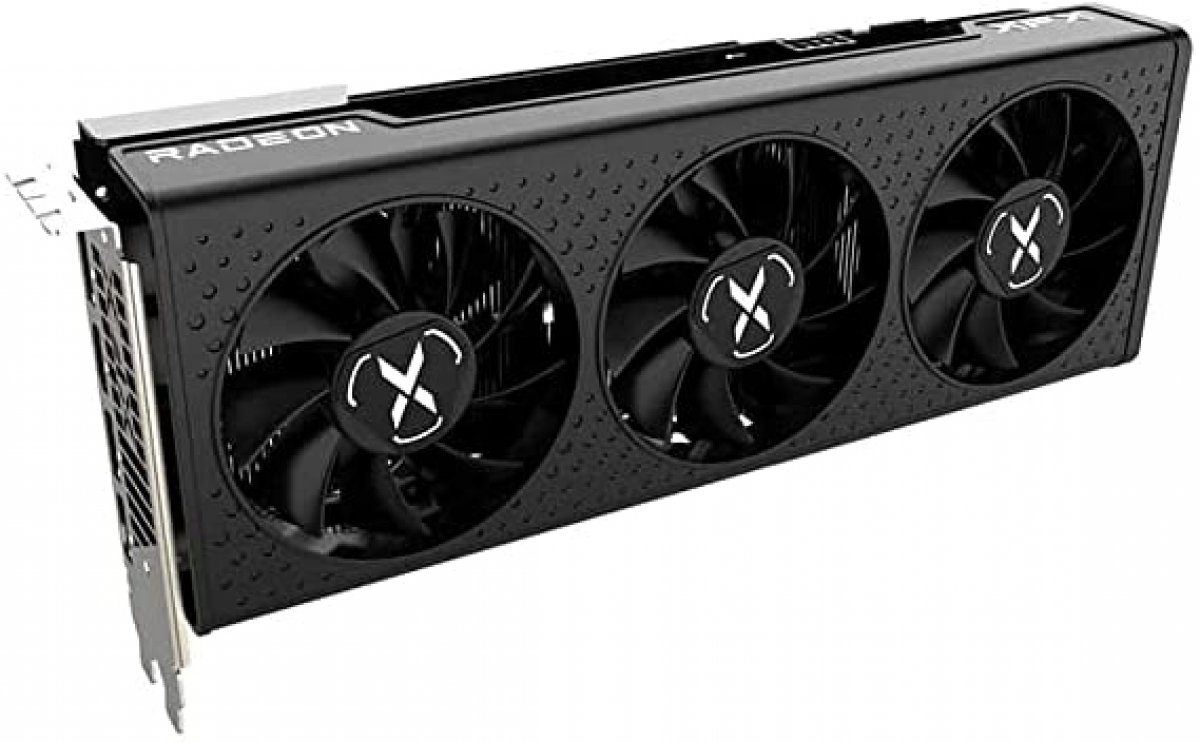 01:24 | Recap of the Artesian Builds Debacle

Check the video for this one!

XFX’s China branch recently had 5840 video cards seized and investigated by port authorities in Huang2gang1, China. The Chinese customs authority claims that the value of the products in transit was $3 million higher than what was declared, which would reduce duties owed by XFX to China and to the countries receiving the goods on the other side.

Here’s one of the photos from the Chinese customs authority, showing the XFX -- we’re not sure that name is appropriate.

Now, unless XFX saw Artesian’s recent tax woes and decided, “hey, tax fraud sounds pretty good,” there is another possibility: MyDrivers noted that XFX has previously taken mining inventory back from miners and resold the devices as new. The customs declaration might be arguable as lower in this case, but then there’s a new level of shady -- namely, selling old products to consumers as new.

AMD is raising all boost clocks up to 4.5GHz, a noticeable improvement over Threadripper Pro 3000 and one that can be attributed to the new Zen 3 cores. Additionally, all Threadripper Pro 5000 SKUs should benefit from AMD’s overhauling of its L3 cache structure with Zen 3, whereby 8-core CCDs have access to a unified 32MB of L3 cache.

Should you require any more proof that non-monolithic silicon is the way forward (i.e., chiplets), we invite you to ponder the news that some of the biggest silicon players in the world – most of which compete directly with one another in some way – are all coming together to found and support a new open standard for chiplet interconnects: Universal Chiplet Interconnect Express, or UCIe.

The overall idea is similar to what we’ve seen with PCIe, whereby those involved will help to create and maintain an open standard, but instead of an interconnect for expansion cards, it would be an interconnect for chiplets. The ultimate goal will be to create a ubiquitous interconnect replete with a multi-vendor chiplet ecosystem, where chiplets are platform agnostic and interoperable.

To date, the big players all have their own proprietary interconnect for die-to-die communication; AMD has Infinity Fabric, Intel has its Advanced Interface Bus (AIB), etc. And to Intel’s credit, it has made efforts to standardize these types of interconnects before, and it seems it will be donating AIB to the UCIe standard to get things started. On top of Intel’s AIB technology, UCIe 1.0, which has already been ratified and is available now, will also leverage PCIe and CXL, the latter of which is another open standard interconnect we’ve discussed here before.

It seems the controversial saga of AVX-512 support on Intel’s Alder Lake has come to an end, as Intel has elected to disable AVX-512 entirely for future Alder Lake CPUs. Intel initially announced that AVX-512 support would not be a feature for its Alder Lake CPUs, due to the hybrid core topology consisting of two disparate architectures, one of which doesn’t support AVX-512.

However, when Alder Lake shipped, motherboard vendors were able to expose support for AVX-512 through various means, and users were able to get AVX-512 working on Alder Lake P cores. Intel said at the time that AVX-512 was not officially supported, and we all expected microcode updates to kill the feature. And while Intel did make good on killing AVX-512 through new microcode, MSI one-upped them by putting an option to switch between UEFI/BIOS versions in some of its Z690 motherboard firmware, and basically re-enabled support. Now, it seems that Intel has elected to go full scorched earth and fuse off the feature in the silicon entirely.

Tom’s Hardware was tipped off by an anonymous source that newer Alder Lake non-K SKUs seemed to have AVX-512 disabled entirely, so Tom’s Hardware reached out to Intel and received the following statement:

Now, as Paul Alcorn from Tom’s Hardware puts it, there’s no amount of hacking or BIOS trickery that will enable AVX-512 support going forward; AVX-512, at least in terms of Alder Lake, rests in a silicon grave.

We’ve recently lost another one of the early computing greats, as news has broken out that David Boggs, co-inventor of Ethernet, has passed away at the age of 71. David Boggs was an electrical engineer best known for his contributions – alongside Robert Metcalfe – for the creation of the networking technology we now know as Ethernet, though his contributions and work also extended to the development of other facets of computing, such as various internet protocols, switches, gateways, and network cards.

Boggs spent a good deal of time working at Xerox PARC – the same hallowed research ground that produced many computing elements we use today – where he eventually met Robert Metcalfe, who was working on the debugging AlohaNet network model and ARPANET’s Interface Message Processor (IMP), both of which were early networking models that proved to be the foundation for wireless networks and routers, respectively. Boggs and Metcalfe would eventually work together to co-invent Ethernet, with Metcalfe providing theories and ideas, and Boggs building the necessary hardware.

As Robert Metcalfe tells it:

“He was the perfect partner for me. I was more of a concept artist, and he was a build-the-hardware-in-the-back-room engineer.”

As many have pointed out, the internet as we know it today certainly wouldn’t have gotten very far without Ethernet. According to his wife, Marcia Bush, Boggs died of heart failure on February 19 while at Stanford Hospital in California.

In a new Linux driver that surfaced recently, it was spotted that Intel is cooking up a new hardware feature for its CPUs, known as “In-Field Scan.” The code for In-Field Scan was spotted by the folks over at Phoronix, who subsequently broke the news.

According to Phoronix, as well as the documentation in the Linux mailing list detailing the driver, In-Field Scan (IFS) is a  new hardware feature to run circuit-level tests on a CPU core that would not otherwise be detected by other hardware tests, such as parity or ECC checks. It seems In-Field Scan is intended to be used in certain SKUs from Intel’s upcoming Sapphire Rapids Xeon Scalable line and would provide a means to monitor the CPU for failures and defects after it’s deployed or in service.

As Phoronix reports, exactly how these tests will be carried out isn’t clear just yet; the kernel driver being proposed just provides the code for the infrastructure and interface for the tests. That said, it isn’t hard to imagine why this would be extremely valuable for maximizing a server’s uptime, especially as expensive silicon ages.

According to recent rumors, Nvidia’s upcoming and yet-to-be-announced “Ada” GPUs could feature SKUs with over 18,000 Cuda cores. Ada, which has been previously known under the codename of Lovelace, is set to be the successor to Ampere and a recent information dump allegedly has the SM and core count for Nvidia’s next-generation GPU silicon.

Additionally, it’s also rumored that Nvidia’s Ada GPUs could have L2 cache sizes 16x what we’re currently seeing with Ampere. The rumored AD102 die could have as much as 96MB of L2 cache, while the smaller silicon could offer L2 caches between 64MB and 32MB. These L2 cache sizes, especially that of the AD102 die, would rival AMD’s RX 6000 series and could be a response to AMD’s Infinity Cache technology.

MSI has announced a new offering in its Trident line of gaming PCs, though this particular offering is aimed squarely at cloud gaming and game streaming. MSI’s Trident S 5M is an SFF PC that looks eerily like an Xbox One console and makes use of an AMD APU, with a choice between AMD’s Ryzen 7 5700G, Ryzen 5 5600G, or Ryzen 3 5300G – all of which leverage Radeon Vega graphics but vary depending on the SKU.

MSI notes that the Trident S 5M boasts a 2.6 liter chassis, with no option (or room) to add a proper dGPU. The Trident S 5M also uses an unspecified B300 chipset-based motherboard which apparently houses 2x M.2 2280 SSDs and an additional 2.5” SSD/HDD bay. The machine will come equipped with 2x DDR4 3200MHz SO-DIMMs, with support for up to 64GB of system memory.

MSI’s Trident S 5M should be available as of this writing through MSI’s retail partners, though MSI didn’t provide any pricing guidance.