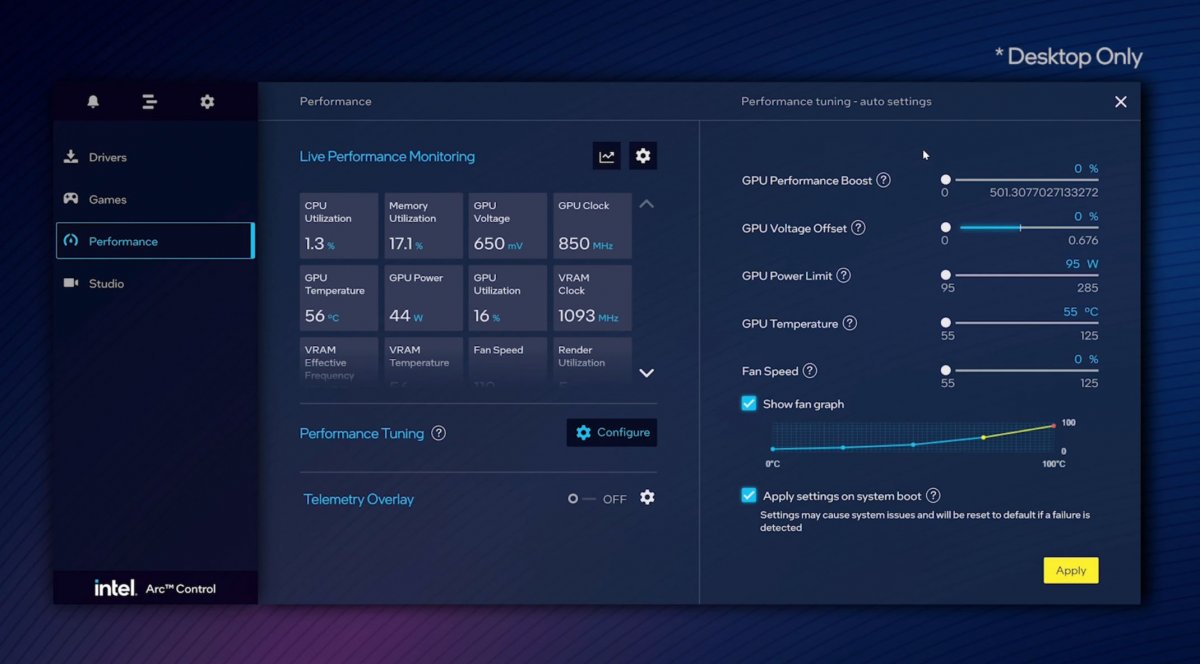 As in the video!

If anyone remembers 2015, that’s when Intel said it’d have 10nm CPUs ready “soon.” That, uh, obviously missed the mark just slightly -- only by about 6 years -- and it also sets the stage for skepticism surrounding Intel’s Arc GPUs.

On twitter, a user asked @IntelGraphics “but when can we actually buy them?” @IntelSupport replied and said:

“Hi! Laptops with Intel ARC will be available for purchase by the end of the second quarter of 2022. We suggest you follow our newsroom for all the updates.”

“Apologies for the confusion, we had incorrect information. Samsung systems with Intel Arc graphics are available now in Korea and will scale to other regions. Additional OEMs in other regions will have systems in the coming weeks.”

This is like past Intel and AMD “shareholder” launches alike: They’re still technically hitting the date promised, so they can tell shareholders they’ve done a good job, but the reality is that this is a very small roll-out that hardly constitutes a launch.

Quarter 1 is over at this point, so “in the coming weeks” doesn’t imbue confidence in the launch -- nor does Intel saying “we had incorrect information.”

This isn’t a leak or a rumor, but an actual Intel first-party video about its new “Arc Control” software for GPU control and game management.

Among the more interesting items, Intel noted that users can subscribe to “game-specific performance updates,” meaning that you’ll be told a new driver is available only when its updates are relevant to the games you play.

The most interesting screen shows metrics overlays and, we think, logging for GPU voltage, clock, temperature, power, and utilization. It also lists VRAM frequency and temperature -- with VRAM temperature being particularly interesting, since NVIDIA doesn’t willingly expose this -- and render utilization listed. We hope Intel keeps VRAM thermals exposed, because knowing is just better for users who want to improve their configurations. Being more transparent on memory thermals would be hugely appreciated, and only stands to benefit a newcomer.

Another screen shows GPU Info for “Intel Xe Graphics_56a0,” with 16GB of memory, ReBAR support, and a playful vendor ID of 8086.

Intel also has a “Tearing Mitigation Mode” in its frame delivery -- this sounds like something former NVIDIA engineer Tom Petersen probably worked on, as tearing and frame pacing have been one of his specialties.

Finally, Intel notes that there’s no login for this -- unlike GeForce Experience, which was ruined by email requirements and logins.

Intel mostly abandoned the HEDT market after its Core i9-10980XE, which was a 7980XE, and focused on trying to re-establish itself in desktop. Now that it has some of its foothold back, Intel may be working toward competing in the HEDT market again.

The AIDA64 Extreme patch notes for the April 8th beta release list “preliminary support for Intel Alder Lake-X CPU” as one of the line items. AMD’s most recent competitors in this region would be the Threadripper Pro 5000 series, but it doesn’t have any non-Pro CPUs of the newest Zen architecture. As for Intel, we’ll wait and see whether Alder Lake-X is a true HEDT part or if that’ll come from Sapphire Rapids instead, which would be more standard.

The cards are rumored for May 10th for launch, which will follow-up all the current AMD CPU launches. Videocardz indicates a cooler design switch-over to the previously limited “Midnight” edition of the reference model, but this is relatively uninteresting since the reference coolers aren’t particularly good, anyway.

AMD recently confirmed that a Radeon GPU driver revision was overclocking Ryzen CPUs without asking. To our knowledge, this only applied to Ryzen CPUs and did not affect Intel CPUs.

Here’s how it worked: Applying a Radeon GPU profile, like an undervolting or overclocking profile, would sometimes also apply PBO (Precision Boost Overdrive). This isn’t too extreme of an overclock, but on boards running borderline on the VRM capabilities with the CPU, or when using coolers that are at their limits, this can result in high thermals. It can also result in system instability, as is always the case with an overclock -- even an automatic one.

This was a bug and is being resolved. If you’re using the AMD Radeon software suite that has CPU overclocking options within it, it’d be best to update as soon as one is available.

“We are aware of an issue in the AMD software suite that is adjusting certain AMD processor settings for some users. We are investigating the issue and we’ll share more information as soon as we’re able.”

Intel has another new product on the way. As you all know, Intel codenames its products cool things, like “Devil’s Canyon,” “Hades Canyon,” “Phantom Canyon,” and “Beast Canyon.”

Features for Wall Street Canyon include buying you out of your own home and renting it back to you, begging for money every time it makes a mistake, a new Consequence Avoidance algorithm, and crashing to desktop every time you visit Gamestop’s website. Patch notes list a known bug with Wall Street Canyon systems where it will occasionally bankrupt the entire economy, but plugging your Wall Street Canyon into a printer will resolve this issue as long as there is sufficient green ink.

Porsche’s design division recently partnered with AOC to make the new “Agon Pro PD32M,” which is an $1800 monitor that Porsche calls a “designer monitor.” Apple would be jealous.

As for what, exactly, a “designer monitor” is, it seems that it’s a 144Hz refresh, 32”, 4K display. It has two alien antennae sticking out of it that can be used to hold headsets, so that’s at least $900 of value already, and it has lots of LEDs on the back, probably worth another $600 or so just in red LEDs alone.

The monitor claims 1ms response times and 97% DCI-P3 color space, but at $1800, you are mostly paying for the name.

After two years of meteoric growth of PC hardware, growth rate has finally dipped for pre-built systems in the market. To be clear, demand is still increasing -- but the rate at which it is growing has slowed.

A new IDC report suggests a 5.1% decline in growth for 1Q22, although IDC quickly points-out that this is better than projected. As a reminder, first quarter volume is typically reduced since most people bought their hardware at the end of the previous year, but the degree to which we see a decline is the noteworthy part.

IDC shows ASUS growing year-over-year, at 17.7% uptick, with HP declining almost equally. Dell also grew, despite its best efforts, as did Apple. Everyone else charted was on the decline, year-over-year. For first quarter, IDC logged 80.5 million units sold, up from 84.8 in 1Q21. The rate of growth declined, but overall growth is still up.

For the past few years, it’s felt like every hardware release has been accompanied by some delay – from the Steam Deck to Intel’s Arc GPUs. In this time, there’s been one product launch that literally everybody has been holding their breath for: Noctua’s chromax white fans. It’s no understatement to say that when Noctua showed the white color scheme at Computex in 2019 that they blew the collective socks off the entire PC enthusiast community and that every day since then that we haven’t had these fans has been pure hell.

We know from our case & GPU reviews that black is the safest color for PC hardware, whereas white is more dangerous and volatile. We haven’t reached out to Noctua for comment yet, but we can only imagine how harrowing the process for testing fans in white can be. We don’t have enough data from our new fan testing machine yet, but we’ve seen a performance increase from any black fans to Noctua’s traditional brown-and-beige color scheme. Thus far, none of the white fans we’ve tested have survived the process.

When we last covered these fans they were supposed to launch in Q4 of this year. Along with the updated NH-D15 cooler, these fans have been pushed back to Q1 of 2023.

Antec was a dominant force in the PC market in the early 2000s, best known for making some of the most revolutionary cases at the time. The Antec LANBOY and Antec 900 are both among these, but the company has struggled to remain relevant with time.

Most recently, Antec launched its new “Dark League” DF800 -- not to be confused with DarkFlash -- a $120 MSRP case in ATX form factor. The DF800 Flux focuses its marketing on cooling, stating things like: “Why the new cooling solution? When Intel and AMD announced their latest CPUs, they all deliver remarkable performance upgrades and better productivity, it also means the functional requirement of PC equipment needs to be taken to the next level, especially the thermal performance.”

When looking at the case, though, half of the front panel is closed-off, despite the presence of 3 fans. The case markets a “patented F-LUX platform,” which Antec says uses “an advanced case structure for excellent airflow.” In reality, what this means is that it uses 5 fans, one of which is a reverse fan mounted to the bottom of the PSU shroud.

We’d be interested to test it, but as Antec has upped its gimmicks over the years, we have become more skeptical of its launches.

The last news item is from AMD. AMD recently filed a patent involving more die-stacking technology for its CPUs. Instead of cache on top of the cores, this time AMD is stacking a machine learning accelerator on its IO die chiplet.

AMD’s patent diagram outlines a substrate with an I/O die (indicated as ‘204’ in the patent), within which sits the memory ports, I/O ports, and chiplet ports. The new inclusions are the accelerator port and 3D-stacked ML accelerator (119 in the diagram). Although this patent was filed two years ago, the information was just published in the past few weeks.