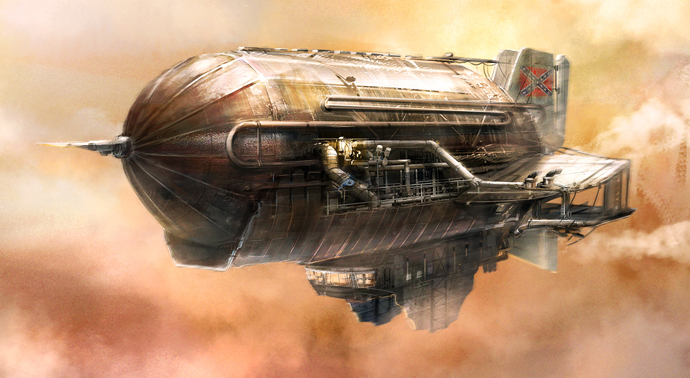 Apparently I'm not the only one -- Radioactive Software president Danny Green envisioned the events of the Civil War with a bizarre-but-appealing twist. "It's 2060s technology infused with the 1860s," Danny told me when we met with Mattias Lilja a few weeks ago, "It's an RTS, but you can take control of any unit on the field [as of the demo]." The free hybrid RTS/FPS game is nothing if not ambitious, and makes strides to include a Battlefield-esque top-down commander mode, hierarchical ranks among players to select commanders (a la BF3), ten initial units, historic scenarios with classic maps, player-controlled squads, sixty-four players on a map with more than a thousand units, completely customizable weapon loadouts (32 total options per weapon), and all the little details you'd expect in such a strikingly diverse game.

RTS/FPS hybrids are something that many of us have dreamed of before, and Danny has taken a similar path to End of Nations' multiplayer functionality (more on that in a minute) in league with unique core mechanics; players can dive down into a first-person mode to take out enemies by the hundreds, for example. In Gettysburg: Armored Warfare, this option provides FPS fanatics an alternative to more macro-intensive RTS play. This combinatory effect brings a whole slew of balancing concerns along with it, and when asked about ensuring that both FPS and RTS mode are equally effective, Danny said: "There will be so many units on the field that going FPS mode won't guarantee victory, but it gives FPS players an advantage that they don't have in RTS games." 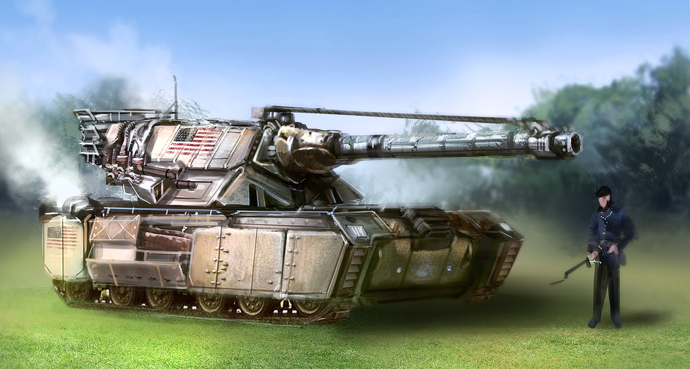 He's right, too -- there are definitely a lot of units on the field. In fact, Danny and Mattias were excited to inform me that more than 1000 units per map, with a maximum of 64 players per game (32 vs. 32) will be possible in Gettysburg: Armored Warfare. The game isn't just another historical, pseudo-educational Civil War game; it's a completely re-imagined futuristic spin stuffed with archetypal steampunk weaponry, and yet, takes place in famous Civil War battlefields between the Union and Confederacy (and their respective uniforms).

That doesn't mean history buffs should be turned off, though. There are plans to make the game playable in multiple different modes, including an 1860s only, 2060s only, and hybrid mode, allowing everyone to use the technology they prefer. Gettysburg: Armored Warfare will include historic scenarios on appropriate maps, giving an additional option to those who do want a historically accurate game. In addition to the built-in modes and units, the team has set supporting user-generated content as a goal; while the map editor is currently a tentative release, modding and skinning should be possible: "We want people to feel like it's their game," said Mattias Lilja, Executive Producer at Paradox Interactive. 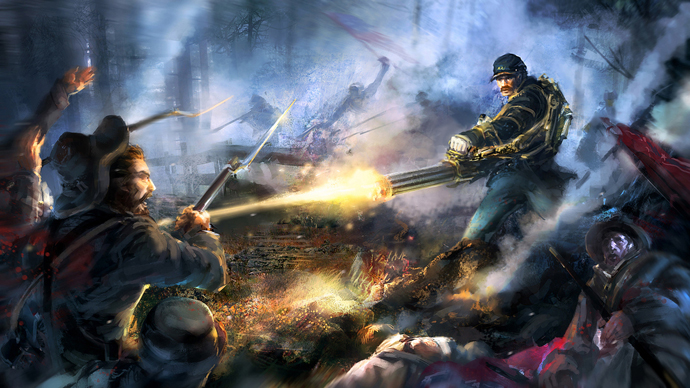 Customization is a huge feature for all of the latest Paradox-published titles, definitely including Magicka and Warband as the forerunners, and Gettysburg will be no different. At initial launch, there will be ten unit types (similar types on each faction, if not the same), persistent stats and levels between battles, individual unit / leader control, and thirty-two weapon modifications for each gun (holographic scopes, iron sights, magazines, and so on). Each battle will earn your units experience points, much like in the Total War series, thus advancing them to enable more improvements. This experience carries between maps, posing even more balance questions: how do you ensure that high-level troops under a skilled player will be anywhere near fair against a new player? While there's no solid answer for anything yet (the game is currently around its fifth month of development), my guess would be that the balancing is done through a budget system. Mattias noted that each battle would inherently include a 'budget per side' feature, as seen in many similar games, making it impossible to recruit an entire army of top-tier units without suffering a "quantity vs. quality" disadvantage. It is my guess, or suggestion, that higher level units will cost more points per battle, allowing new players to recruit more than their highly ranked opponents.

It's rare for a game so early in development to have so much already planned -- whether that is good or bad, I will leave up to you guys (comment below) -- and there's still more that I haven't even touched on (such as the Iron Clad battles and Zeppelin usage). The game is shaping up to be an extremely original product with just as many objectives as balancing hurdles. Beta is slated to begin in the summer of this year. You can check out either the Paradox or Radioactive pages for more information on this game.

We'll release artwork and updates as they become available, and with any luck, first-hand notes on the beta.