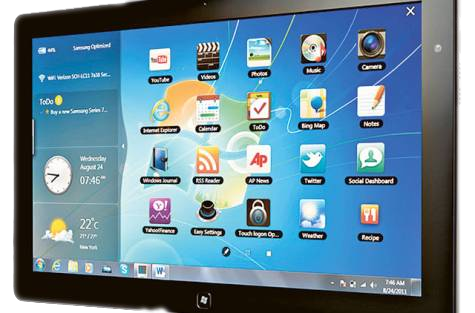 Hardware
Trying to secure its presence in the newly-crowded tablet market, Samsung has unveiled an interesting new device to the market.

"New form factors in the PC industry and ultrabooks are going to fuel the PC industry this year as hardware specs are getting stronger," states Denzil D'souza, head of notebooks at Samsung Gulf Electronics, as he unveiled the Slate PC 7 series. Samsung believes that the rising need for even more mobile power will be what consumers crave going forward.

This device is powered by an Intel i5 Sandy Bridge processor and currently runs a full-blown version of Windows 7; with Microsoft's looming Windows 8 launch on the horizon, this device is poised to make good use of its stylized touch-screen interface software. The Slate PC is 11.6" and connects to a docking station to emulate a full desktop PC, much in the way Asus' own EEE Transformer emulates a netbook. Samsung boasts that this device will give users all the power of a PC, but when unplugged, that same power goes mobile just like their popular Android tablets. They have yet to announce a price point at this time.

In 2011, an estimated 25% of tablets were purchased for business use. Market trends would seem to indicate that number will rise dramatically in the near future as retail, health care, and education environments see the benefits of computing and mobility.