Skyrim hasn't been known to be the most optimized game for PC gamers, but it is quite flexible in its requirements; after installing our graphics mod overhaul, though, even those of us with powerful PCs could use an extra FPS and performance kick.

The nVidia 301.42 WHQL drivers can be snagged here, for those running modern GPUs by the company, and expand on FXAA, Adaptive VSync (reducing tearing and increasing FPS), and other new features (read about what these mean in our GPU dictionary). 301.42 enables FXAA (shader-based anti-aliasing technology to increase performance) in "hundreds of games" and can be manually-applied via nVidia's control panel. Nvidia claims: "This technique is up to 60% faster than 4xMSAA, and can produce results equal to or better than the aging anti-aliasing solution. Furthermore, FXAA is able to anti-alias increasingly-popular transparent textures."

Nvidia's newest drivers show the biggest improvement in Skyrim's performance, which nVidia dubs "the world's most popular role-playing game" (I'm sure Wizards of the Coast won't have a problem with that statement), revealing a 17%-20% performance boost at 2560x1600 resolution with ultra settings and "similar gains" in 1920x1080. 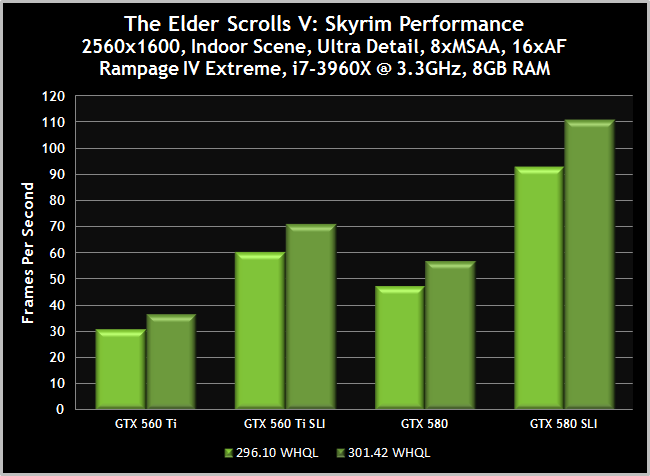 560 Ti and 550 Ti users will be most grateful for this boost, which now pushes them into the 35-40FPS range, rather than teetering on the borderline 25-30FPS.

Other performance increases were also seen in additional games, though many of those listed in this chart are more CPU-intensive than anything, so bear that in mind if making any decisions. 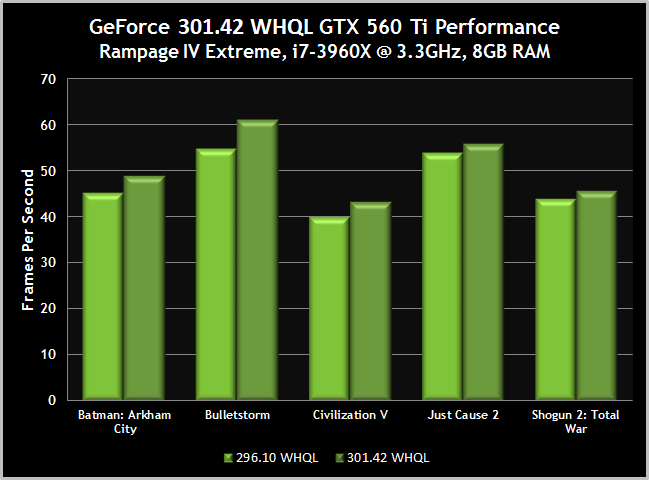 As always, please ask any tweaking or performance questions in our comments section below - we're here to help. Our forums also provide a solid in-depth discussion area.