The first Insurgency did just that: It's been a very, very long time since we posted content on the first game; in fact, our Insurgency mod "review" was one of the first reviews ever posted on this site, way back in 2008. Yeah, things have changed quite a bit. We did enjoy the original, though, and some of my first memories of the game involve being pinned down on the highway, calling out to my friends on vent to provide covering fire while I retreated.

I died. A lot. But the game's slow-paced, tactical play had a redeeming and addictive quality about it. It quickly trained the player to react more cautiously -- even the delayed kill messages (X killed Y) helped further the game's difficulty and produce an environment which encouraged better teamwork and tactical decisions.

That's where Insurgency 2 comes in, we were told by Jeremy Blum, founder of the development house behind Insurgency 2, New World Interactive.

A lot of the challenge, Blum says, has been kept with the new game, but they've now opted for two game settings: "Realism mode," something which closely resembles the first game, and then a "normal" mode/setting for less serious shooter fans. This division should work toward isolating players with other players of similar experience or goals and is not inherently innovative (game modes and settings have been around as long as games), but there's more to it than just toggle-able options.

Let's look at what we know about Insurgency 2 so far:

Feel of the Game

The core element of Insurgency 2 - one which is admittedly hard to showcase in text, gameplay footage, or screenshots - is its overall mechanical fluidity and feel. Insurgency is "all about player movement, the way the weapons feel when you look around, the way they respond when you fire them," Blum told us; he emphasized that the approach to camera and player movement will help build realism and create a more engrossing atmosphere for players.

Our game has a feeling to it that's very similar to Source games -- so if you come from playing Day of Defeat, Counter-Strike, Team Fortress, or Half-Life -- whatever your background is, if it has any source engine games in there, it's going to be really easy for you to get into our game and for it to feel right to you. Our free-aim system and the way the weapons behave - very powerfully - I think adds a new element to a typical source engine experience. We were able to add all the stuff that makes the weapons behave more naturally while still feeling like a source game, even though it's very different.

Without a crosshair and with the added free-aim system, the realism aspect is directly experienced in gameplay, even on the HUD level. In the old Insurgency, to provide a more relevant example, even the kill/death indicators (often displayed in the top-right of Source games) were even displayed, making it tough to know whether you had successfully killed your distant target or not. This is the defining element for the game, we were told.

Insurgency 2's approach is meant to allow for "competition on a local level," harkening again to the Counter-Strike approach. You jump into a match and everyone's on an even playing-field at the beginning of the round -- some players will have persistent kits with unique upgrades (see the next section), but those won't impact gameplay heavily enough to off-balance it or otherwise make it unfair, we were told. Veteran players are rewarded, but not in a way that makes them instantly able to obliterate the entire enemy team.

We asked Jeremy Blum to walk us through a typical match, here's what he had to say:

The way it works is we have weapon pickup areas and spawn areas where we have primary weapons lying out - AK's, MP40s - just laying out there, free to pick up. Through objective play, through getting points, whatever it is [in that mode], you get to upgrade weapons for your whole team when upgrades are unlocked. So, for instance, the upgraded M16 is a version with an M203 grenade launcher and optics on it. So if you're using the M16 in the game and performing objectives and doing what you should be, you earn an upgrade; you are informed that you get the upgrade and your entire team now gets to use that upgrade once you get it. There's a team incentive to weapon upgrades.

This should hopefully help keep newer players in the game and prevent over-powering veterans, but most importantly, will keep teams working together to win the arm's race for the match. 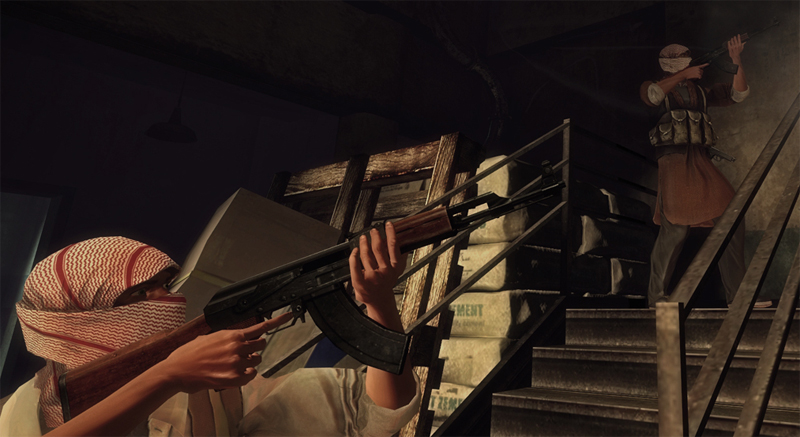 Here's where things get more gritty and detailed. There will be six weapons for each team - a total of twelve - and each will be balanced on a mechanical level before realism is accounted for. "We're thinking about balance, here," Blum said, "but we keep realism in mind throughout the entire process. The first goal is to make it fun."

Each weapon has its own unique functions and an archetype. The archetypes are fairly standard, but worth mentioning nonetheless: Automatic rifles, semi-auto rifles, SMGs, shotguns, MGs, and rocket launchers will all make an appearance in Insurgency 2, but each team will see different variations of the same weapon types. "We basically balance them out so that the Security Force and Insurgents have opposing weapons -- the Security Force will have an M16-A3 for their assault rifle and the Insurgents will have the AK-M. We have those twelve in our heads, but they might change and we may add more to it, so nothing's finalized yet."

Player load-outs and kits help to define our ability to stand-out as players and make our mark on the server, though, so it's important to focus on player-character options just as much as server-wide options. On this front, we were told:

We have what I would consider to be a unique system: We have 'personal weaponry' -- pistols, melee weapons, and explosives. Those are the kit items you can get independent of the game, persistently over time and through our item system, achievements, other things. A week after playing, for example, you may get a new pistol or extended mag or silencer -- or a cool explosive. Stuff that impacts gameplay, but doesn't have a huge impact on it. We don't want to do the Call of Duty or Battlefield thing where people who have played the most hours are the automatically the best.

We're not certain if Insurgency's original Push mode will return to the game, but we do know of a few game modes so far:

This one's new, but fairly straight-forward: Each team starts with 50% ownership of the central high-ground (emulating King of the Hill). There's a server-side time limit (presently defaulted to ten minutes) and each team fights over control of the high-ground; "it goes back-and-forth a lot, kind of like tug-of-war," Blum said.

When the time limit ends, the team with more than 50% control wins. This makes it far more conducive to last-ditch efforts and individual contributions and pushes than other modes, as a single player could - "if he's good enough" - kill all the defending enemies and then take the high-ground.

This one had me excited: In Convoy mode, one team will defend an AI-guided convoy while the other team must assault it. Defending players must escort the convoy from start-to-finish, only achieving victory once the convoy has made it across the map. This helps encourage careful play and planning.

The attackers will, naturally, assault the convoy and try to destroy it before the goal is met. Convoy will be based on some of the larger maps in the game.

While we have fewer specifics on this mode, at the time of the interview, it looks like there will also be a classic TDM-style mode (similar to CS:S in style). It's meant to be played more as the 'casual' mode and facilitates a pick-up-and-play approach to the game.

There are two map sizes that the team is currently working with: Smaller map sizes - the ones that will accommodate Occupy mode, and larger maps, meant for the Convoy.

Smaller maps will make for tight corridors and challenging firefights, while larger maps - within the constraints of the Source Engine, anyway - will be less restrictive in movement:

It makes you think even more before hopping out of a corner -- you really don't want to die in the harder game modes.

The map types will be varied, we were told, despite the limitations of being based (primarily) in the Middle-East. 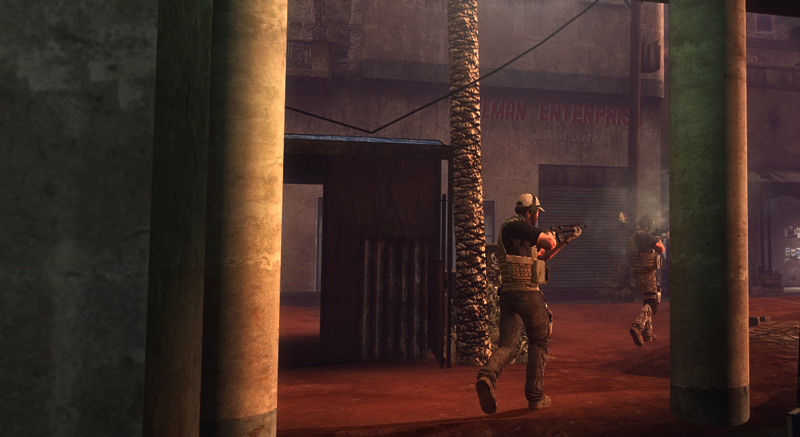 While still under full development, we do know that INS2 will ship with a squad system built-in.

Squads will allow players to connect with allies in the immediate area -- a proximity indicator alerts you of nearby allies, which then connects the players and provides a HUD with player locations, health, and names for that group. Squads are limited to four players.

There is no squad leader - like those that'd be found in BF3 - but there is the potential that a commander role could emerge from development.

Jeremy went into quite a bit of depth on this front, so we'll just provide his verbatim responses to gameplay questions:

Our game is very direct. No matter what game mode you play, we're not going to have it so you can go in too many different directions -- it's not like Battlefield in that sense -- you can't branch-off and go to three or four different objectives. Our game directs people to one focal point; you can flank left or right to get there, there are different paths, but there's only one focal point. It's hard for players to get lost and it generates cool firefight gameplay mechanics.

We're trying to stay with what our engine is good at. We want it to be fun - we want to get firefights going.

Insurgency 2 is still a ways off -- it won't be done until some time next year, but you can still follow it and provide your support to the team of five. Here's where you can find out more:

What do you think about Insurgency 2 so far? Are you hopeful? Pessimistic? Tell us why below!