Hard drives are the spawn of hell. They clunk, tick, and kerdunk their way to inevitable death. The very nature as a mechanical devices makes them unreliable and slow, and for high-end use, there's no reason not to get an SSD.

Magnetically-inclined demons is what they are. At least, that's what one of the most intelligent, wacky, animated contributors to the technology industry says.

Linus Torvalds, the man behind the Linux and a driving factor in the open-source movement, has admitted that he outright refuses to use systems with magnetic spindle drives. Slashdot hosted a chat session between its users and Torvalds last Thursday, where Torvalds -- the very one who eloquently quipped, "NVidia, fuck you!" -- showed his hate for hard drives.

"The one (personal) thing storage-related that I'd like to re-iterate is that I think that rotating storage is going the way of the dodo (or the tape). "How do I hate thee, let me count the ways". The latencies of rotational storage are horrendous, and I personally refuse to use a machine that has those nasty platters of spinning rust in them."

Well, if that's not a convincing argument, I'm not sure what is. Torvalds did explain that there are uses for mechanical disks, but suggests that these are limited, and personally sees use of rotating storage as inexcusable:

"Sure, maybe those rotating platters are OK in some NAS box that you keep your big media files on (or in that cloud storage cluster you use, and where the network latencies make the disk latencies be secondary), but in an actual computer? Ugh. 'Get thee behind me, Satan.'" 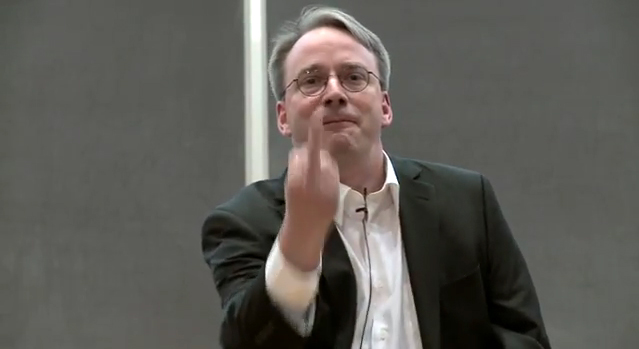 Torvalds giving nVidia the finger from a previous panel.

As you'll see in our impending SSD article (to be posted later this week, if scheduling is on our side), we agree that SSDs are the way of the future for primary drives. With that said, though, don't take these comments as the law -- HDDs still stand as a usable and viable option for most gaming configurations and make for excellent, cheap storage. SSDs will continue dropping in price as competition keeps surging into the market, but at the end of the day, it still makes sense to use an SSD as a primary drive and then load your bays with several logical storage drives.