The new Samsung Chromebook is:

Other improvements – such as the screen resolution being bumped from1280x800 to 1366x768 and Google Drive integration – will allow the Chromebook to shape up as a viable option. It's really a device for those who have a computer already but want a lightweight add-on to use as one would use a smartphone: For travel, and portability.

This isn't a huge selling point for everyone, though. Due to the fact that everything must be done in-browser, none of your favorite programs you could use on a normal netbook will be available. If you're out of Wi-Fi range, then you're out of luck. This is primarily due to the cloud-focused storage structure: There's only 16GB of on-board storage… my cellphone can easily pull that off, though to be fair, the Chromebook has an SD Card slot as well. Google boasts 100GB of free Drive storage (for two years) to make up for the lack of space, but this will, of course, be entirely inaccessible without internet access. Google Docs will now function offline, but traditional file storage will be web-based, if you use that 100GB.

If you are one to find the Chromebook a valued step-up from tablets and prefer an attached physical keyboard, you should be good to go with the latest improvements over the Chromebook's poorly-performing predecessors. Looking forward, sales should increase because of Chromebook's wise changes and the tag-team Google-Samsung marketing campaigns.

The biggest improvement keeping the new Chromebook from being subpar is its processor. The fact that people couldn't play Google's Angry Birds app properly or watch HD video without stutter really turned many people off – as it should. The big switch from Intel to ARM – Atom N570 to Samsung Exynos 5 – really might save the Chromebook product line, but will continue to pressure Intel's privileged market position. 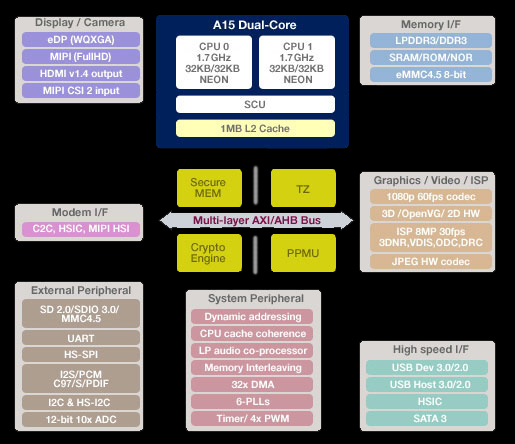 A block diagram of the Exynos5.

Which processors are shipping out with most Tablets? ARM. How about Smartphones? ARM. Now, netbooks are starting to be overtaken by ARM. The more popular the Chromebook and similar devices become, the more widely-installed ARM will become. ARM microprocessors are cheap, low-TDP, and high performing.

Intel is gradually losing control of a significant portion of the computing market: Portability. If PC sales continue to decline (which have significantly impacted AMD), and as portables boom, we could see a shift in the hardware industry's weight. With the market shifting towards portable computing – smartphones, tablets, netbooks, etc. – Intel struggles to compete against ARM and is feeling threatened by AMD's Trinity, though Intel has made efforts with its huge push for Ultrabooks. We'll see what Haswell will bring to the table, though. Maybe Haswell's improvements in even lower TDPs and increased performance will help Intel establish and maintain a foothold in the portability market, if only for a little while.