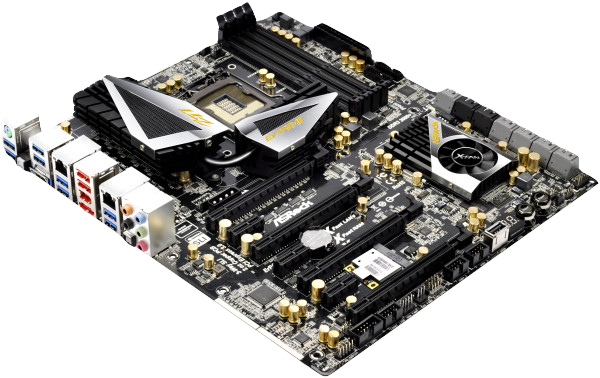 ASRock's latest Z77 Extreme11 motherboard looks like they're selling wreckage from an alien ship. They've come one step closer to facilitating the full potential of decked-out SSD RAID arrays and stacks of GPUs.

If you've decided you actually need a Z77 chipset, ASRock is happy to oblige. Here's what they have to offer:

- The capacity for a RAID 0 array with up to 8 SSDs. According to ASRock, this allows IO operations of up to 3.8 GB/s, whereas the average SSD can do about 550MB/s on its lonesome. This means that although the data drives will still be the major bottleneck, their speeds are significantly closer to catching up with the rest of the system.

- Supports Lucid Virtu Universal MVP. This includes: HyperFormance, which increases FPS and responsiveness, better Vsync support, which eliminates screen tearing while improving performance (with dGPU and iGPU), and Switchable Graphics, meaning that tasks will be assigned to the best graphics resource available for the job.

- Excellent overclocking prospects. Dual stack MOSFETs mean increased (but not doubled) voltage regulation efficiency, making it safer to overclock even higher; you can read our overclocking primer on that, if interested. This is backed up by 2Oz. thick PCB and more efficient heat piping, keeping temperatures low and energy efficiency high.

It even includes dehumidifier functionality, which will occasionally wake the system from S4/S5 states in effort to dehumidify the case interior. No need to worry about moisture damage to your chassis-stashed cigars—and yes, the capacitors are coated in gold.