This past weekend was Sacramento's Intel-sponsored LANFest 2012, where gamers and hardware vendors amassed to benefit local charities, play some games, and show off their systems. We had a chance to head over to LANFest and talk with Antec about cases and PSUs, Gigabyte, who showed us their best motherboard offerings and talked UEFI BIOS, and ASUS' ROG division, also with motherboards.

You'll also find a case modding gallery on the second page, from those who brought their modded rigs to the convention!

"LANFest sponsored by Intel" is actually a series of LAN parties that occur around the country. It's a nonprofit that raises funds for a variety of local and national charities, including local food banks, hospitals, and the Child's Play Foundation, which makes it a point to provide entertainment to children.

Three days of nonstop gaming with 350 buddies, with all your contributions going to a good cause? Damn, it feels good to be a gamer.

Despite being a smaller event versus the Quakecons and Dreamhacks out there, LANfest draws over a dozen sponsors from all over the PC hardware and gaming sectors. A few of them usually make it out to the event to show off some products and give out some big-ticket prizes; this time around, GamersNexus caught up with ASUS, Gigabyte, and Antec.

Let's take a look at what they had to show off.

When we worked with ASUS previously, we learned that their company philosophy is to facilitate community and system building enthusiasm––an approach we agree with. The team behind motherboards, graphics cards, monitors, laptops, and now tablets, ASUS has become more synonymous with consumer tech than ever before. They showed up to LANFest to showcase a couple elite systems that powered two impressive hi-res (1440p) displays.

ASUS got creative in delivering a performance-driven gameplay experience by setting up two of their VG278H monitors running off of NVIDIA 3D Vision (review here); in the middle of the display was another VG27 which, through ASUS' AI Suite, monitored the performance of the hardware as it ran Street Fighter IV. The display ran off of a Rampage 4 Extreme with a three-way SLI GTX 660Ti GPU array, which probably could double as a frying pan. All of this ran out of a colossal Cooler Master Cosmos II case and, new to the market, Cooler Master's Seidon 120mm liquid cooler.

Perhaps ASUS' second display was even more mouth-watering. Three PB278Q WQHD monitors were running Borderlands 2 as smooth as butter on 2560x1440 resolution. Want to guess the graphics card? A GTX 690. Because why the hell not? More impressive was the Thermaltake LANBOX small form factor case which accommodated the GPU, ASUS' P8Z77-I Deluxe motherboard, and Cooler Master's Silent Pro Hybrid 1300W PSU. Patti from ASUS explained that they did not test this system on other GPUs and opted to go straight for the maximum output, so chances are this setup is a one-of-a-kind dream machine. 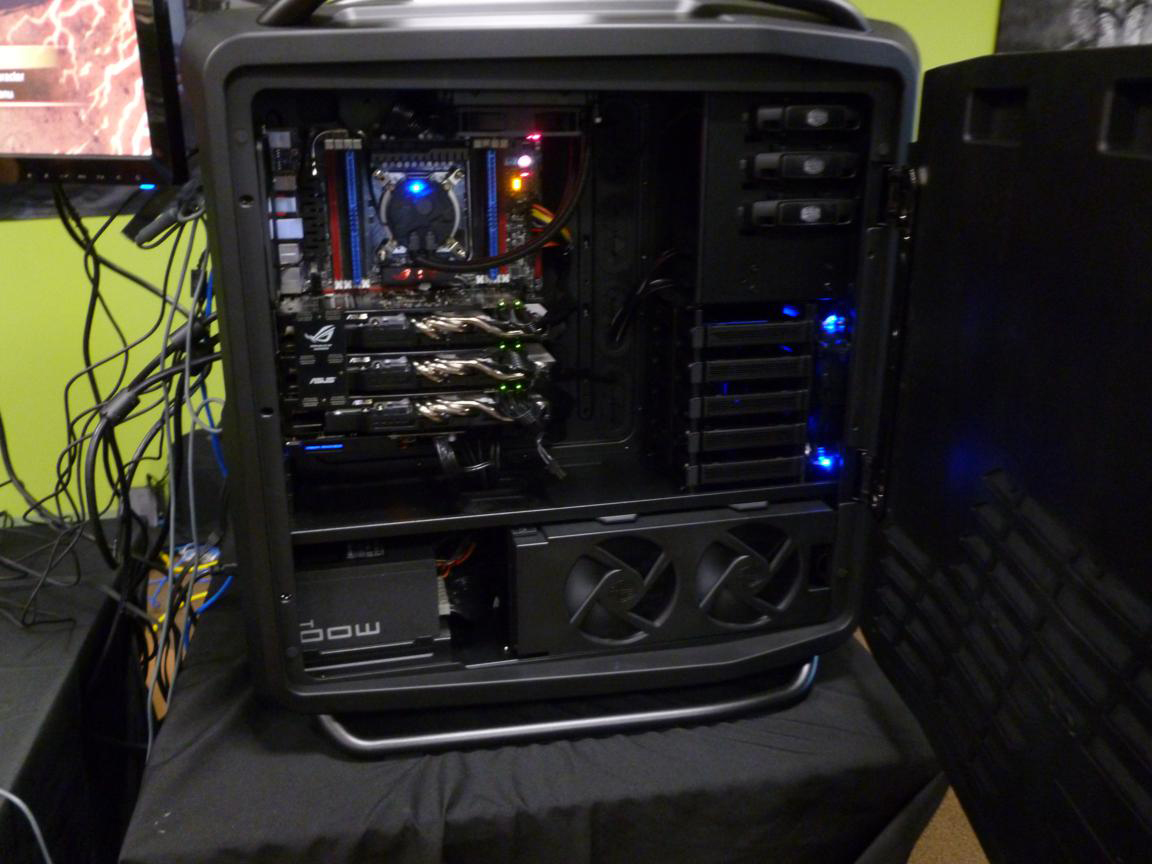 Like many other GPU manufacturers out there, Gigabyte has had their hands full with the complete lineup of NVIDIA-powered Kepler cards (read more about these here: 660 Ti specs, 660 / 650 specs). This time around, they showed up to LANFest to educate users on the importance of powering systems with quality motherboards. You're likely familiar with Gigabyte's G1 boards, but here's the rundown anyway:

The G1 series uses the Z77 chipset and is available in an Extended ATX form factor for up to 4-way SLI/Crossfire, as well as a micro-ATX form factor with more basic SLI/Crossfire capability. These boards support some of the most powerful consumer-grade processors available, including top-of-the-line Intel CPUs.

Newer to Gigabyte are the updated Ultra Durable 5 Z77 boards, the Z77X-UP5 TH and X79S-UP5. Gigabyte's Ultra Durable 5 technology pushes similar high-quality components to ASRock's Extreme11, like bolstered MOSFETs and voltage regulation zones with 2x Copper PCBs and hardware rated for high-current. These features are important for a few reasons: Being an enthusiast motherboard, Gigabyte's new MOSFET chip design reduces your system's temperature by "up to 60 degrees" and, as a result, improves overall system health and longevity. It also allows for greater overclocking ceilings and stability. The tech would primarily come into play for intense overclocking environments, though I found it valuable that Gigabyte is making small tweaks, like fusing the MOSFET setup from a 3-chip to a 1-chip configuration, to make overclocking and gaming more accessible to everyone.

As an aside, one of the other notable features of the latest X79 board, the X79S-UP5, is its included SAS connector for further storage array compatibility.

Both of these motherboards, as well as a couple other Z77s and X79s, come with a Gigabyte's take on UEFI BIOS, called 3D BIOS. The idea is to enable users to modify their system's settings from a user-friendly, "3D" view; this is done by providing an interactive isometric graphic of the motherboard: Just click on the bus, port, or component you want to modify in the 3D view, then make your tweaks from there. When I asked Gigabyte's Irene about Gigabyte's direction for UEFI BIOS, she told me they've found that novice system builders are hesitant to change their system's BIOS configuration, so they're much more receptive to a graphical approach in the BIOS. If you've followed our Overclocking Primer but have been hesitant to pull the trigger, it's advances in UEFI front-end displays that will help make your life easier. 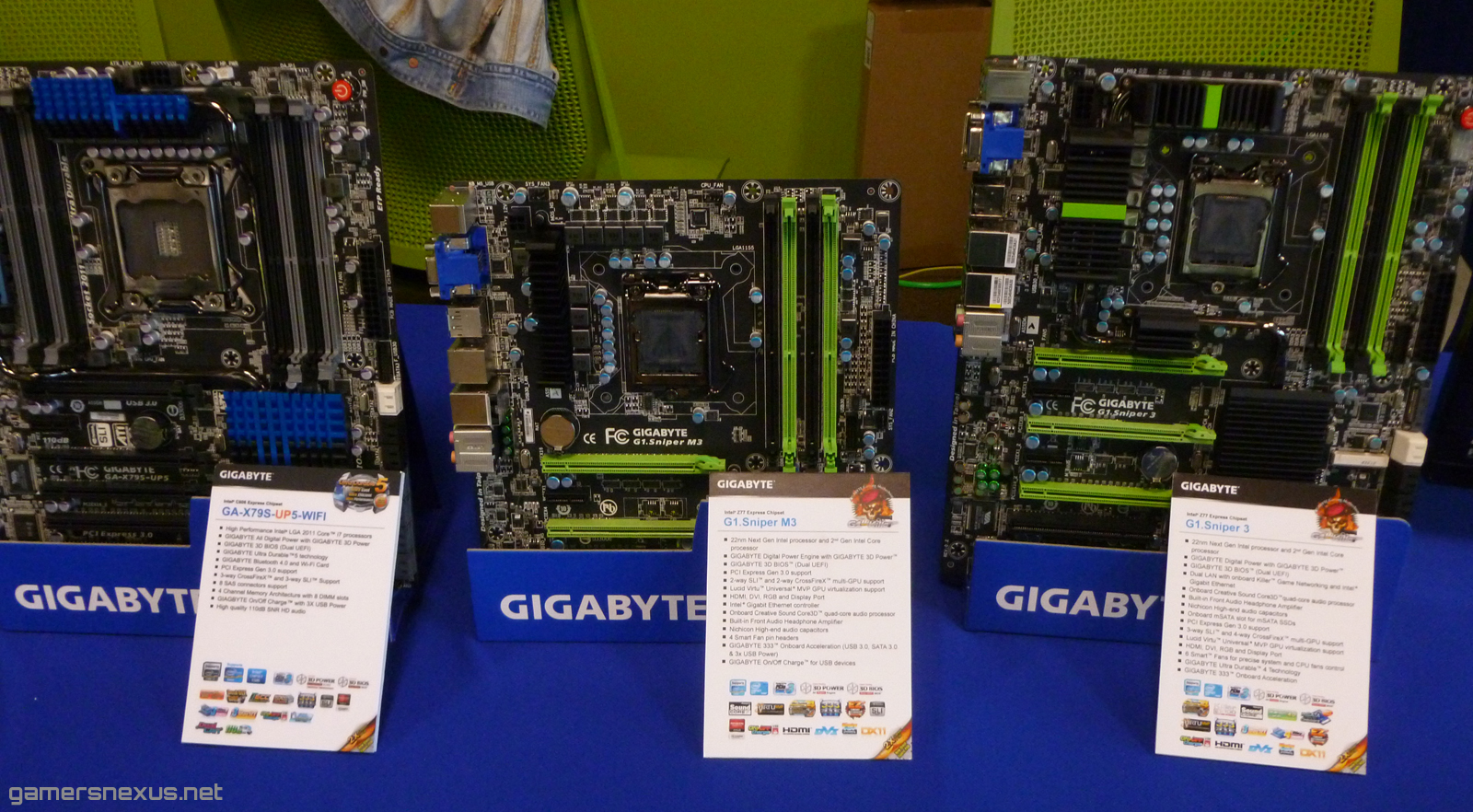 Gigabyte also wanted to bring powerful computing to the HTPC crowd with its Mini-ITX Z77N-WIFI motherboard. The board comes with a built-in Intel Wireless module, which will enable you to send a signal to a second monitor (i.e. your living room TV) and enjoy your movies and games there, remotely. Sending Minecraft over to a remote (but close) display is certainly another possibility, but for latency-dependent games, like twitch-shooters, some of the more advanced players may notice increased input delay (we're talking milliseconds, here).

A manufacturer of power supplies, cases, and cooling components, Antec brought some familiar products but gave them a twist. For cases, they showed off a white version of their quiet-yet-cool P280. They also gave us a first look at a military green Eleven Hundred, the M1100. The difference from its original model is a dual-120mm top fan configuration, replacing the original design's 200mm blue LED fan; the main reason for this is to support 240mm radiators for liquid cooling. Speaking of which, Antec is coming out with their first 240mm liquid cooler, the KUHLER H2O 1220. Convenient timing.

The 1220 comes with two pulse-width modulation (PWM) fans, although users can install two more fans for a more efficient push-pull configuration. No release date has been given.

Like they've done at other shows, Antec has teamed up with NCsoft to create beautiful custom side panels based on Guild Wars, Aion, and City of Heroes. And now consumers have a chance to buy those on the Antec website. They've also created a PSU cable called "OC Link," which allows for two of their HCP-1000 Platinum power supplies to bridge for roughly 2000W of combined power for ultra high-end rigs. 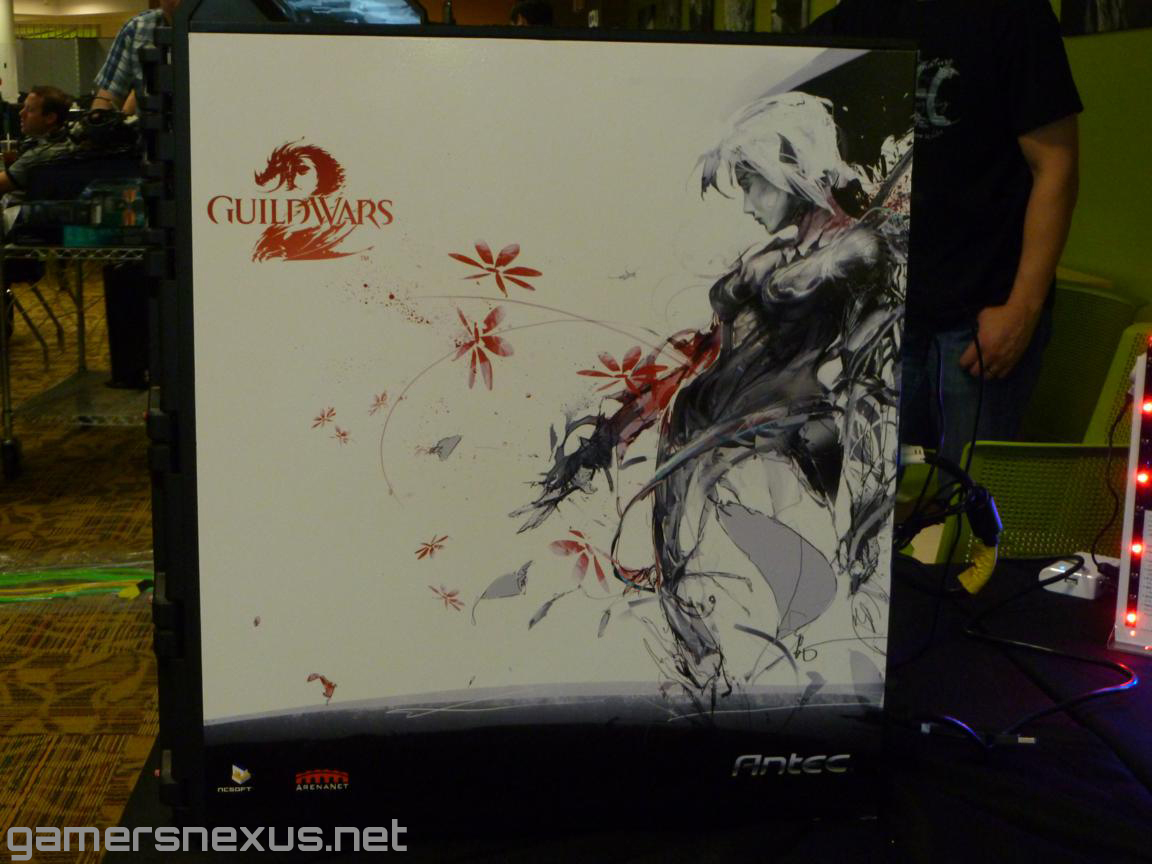 As we know, you don't have to be a sponsor to have an impressive system. We ran across a couple spectacular builds and some creative mods this past weekend. The gallery can be found on page two of this article, here.

From a paint job alone, I was particularly impressed with the Borderlands 2 mod on a Cooler Master HAF 932. The artwork reflects the cell-shaded aesthetic of Borderlands, not to mention it's on a case that has the angles/physique of something you'd find in the game. The modder even created an "ammo box" on the back of his monitor to reflect one of the weapons manufacturers in the series. 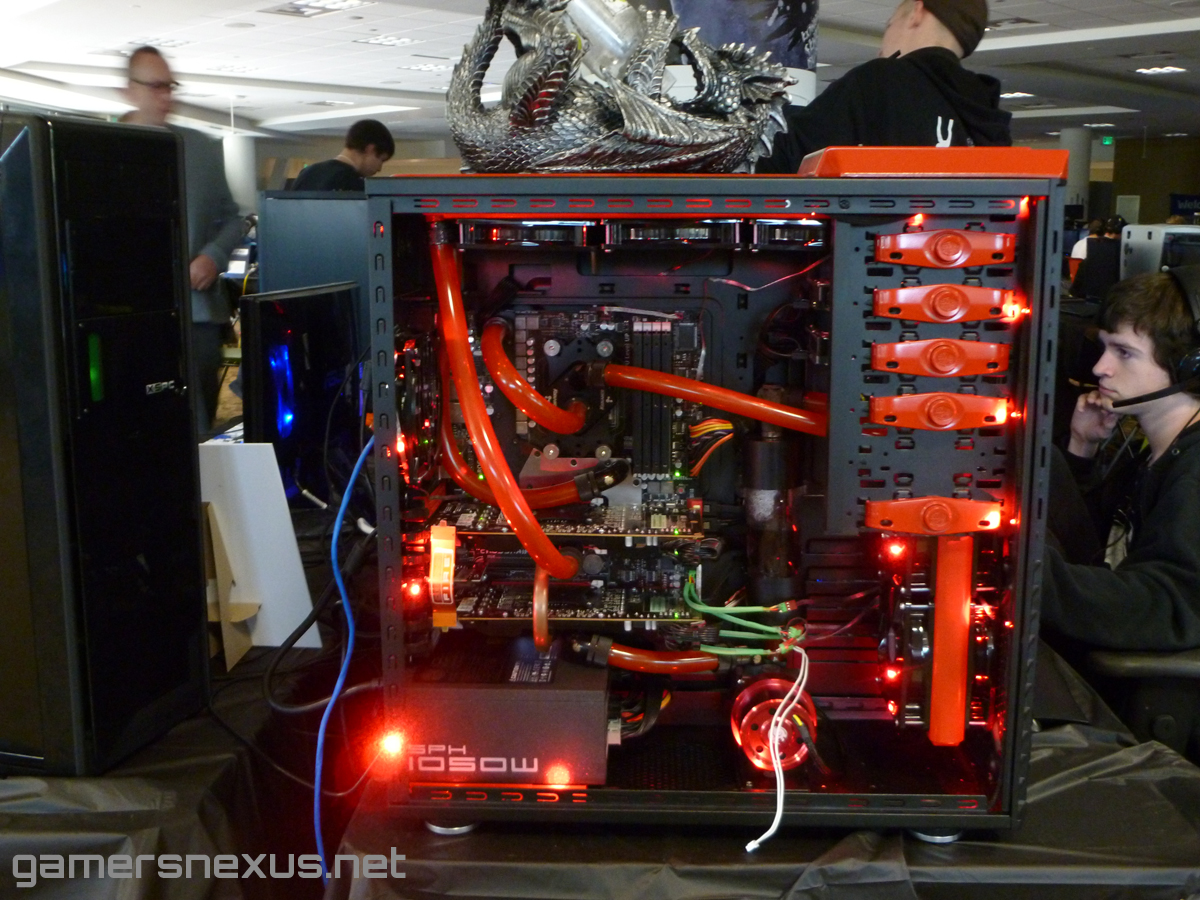 Despite being an Intel-sponsored event, I also want to tip my cap to Steven Ellis, who created an AMD and dragon-inspired mod. This is only the second mod from Ellis, too, who said he started out by "[trading] a video card for the motherboard and CPU, which is a Crosshair IV Formula and an AMD 1100T."

As for the case, he purchased it used but noticed the side panel had an Intel graphic, so he located an AMD side panel with a dragon graphic and opted for that. From there, Ellis painted his HAF 932 red and black. When it came to liquid cooling, he imagined fitting his reservoir on top of the case with his dragon figure -- with the tubes routed out the back side of the case -- but time got the best of him (so far). Still, he put some impressive hardware together, including liquid-cooled dual-6870 GPUs and a Cooler Master Silent Pro Hybrid 1050W PSU, and it makes for an excellent example of how you don't need sponsorship to get into case modding. Well done, Steven! 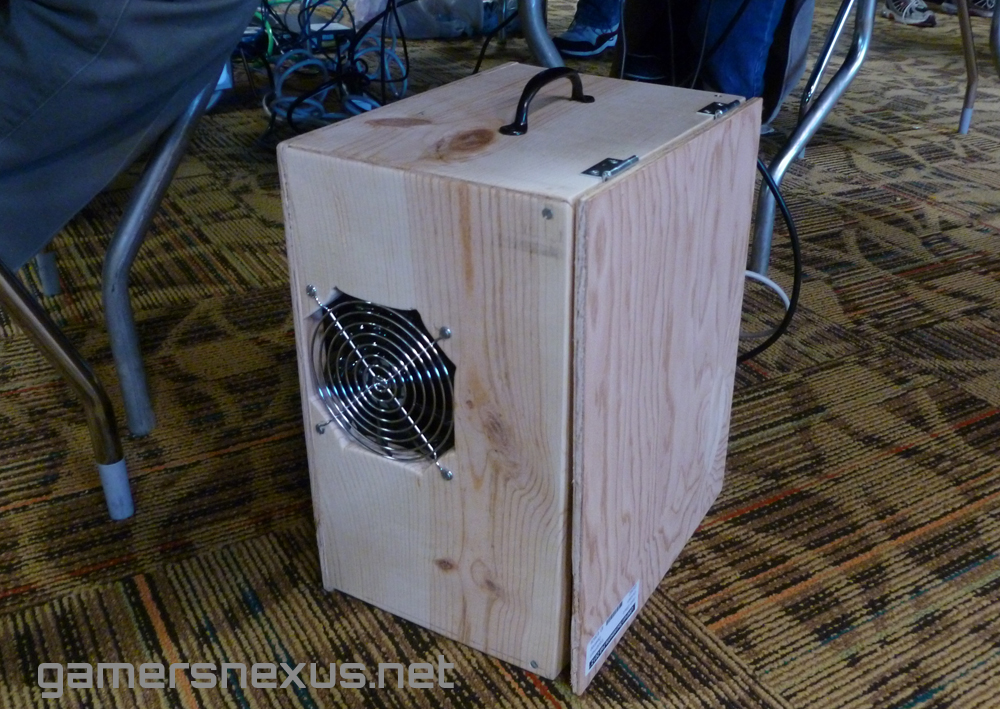 Another mod caught my eye...though many would call it a sight for sore eyes. Our guy Josh toted his "Little Woody" to LANFest and earned his fair share of gawks throughout the weekend. He's running an i7-3770k with integrated graphics with an Intel Mini-ITX motherboard. How long did it take for him to cut the wood, sand it down, and install the components? According to Josh, it was approximately a four hour project. 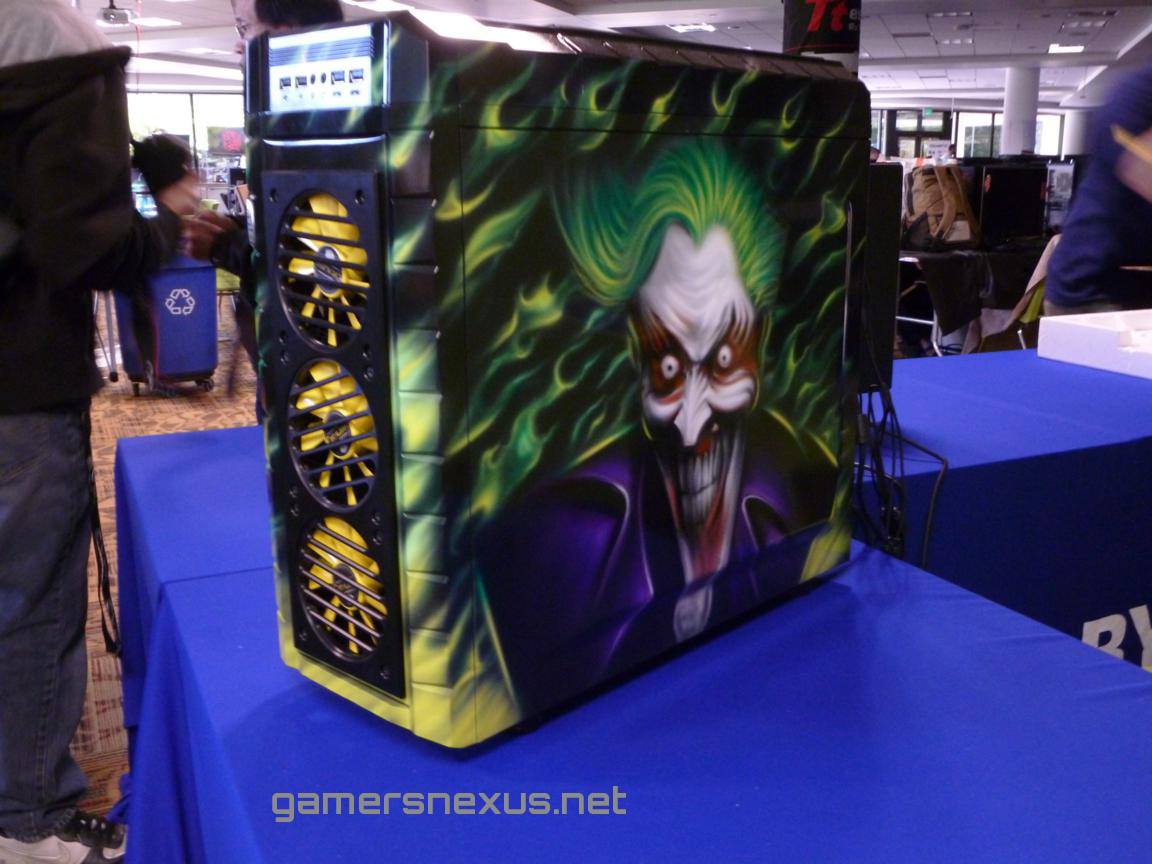 Speaking of modding, Lee Harrington, a well-known modder in the community, was also present with a couple of his signature projects. One of which, the Joker mod, was on display at the Gigabyte booth.

On the case modding note, CPU Magazine held a modding contest which would take the winning project and put it in an upcoming issue of CPU Magazine.

A Little More about LANFest

LANFest raises funds for select charities primarily from the 350+ BYOC. However, friends of participants can still have a good time as spectators and do some PC gaming for free in the demo area––and those demo rigs aren't anything to laugh at. For example, this set of demos run off Core i7-3770k and NVIDIA GTX 670 technology. You also get a great look at the Corsair suite of cases, power supplies, liquid coolers, SSDs, and peripherals.

LANFest also hosts its fair share of gaming tournaments, prize raffles, and wacky contests. We were fortunate to be there for the below keyboard disassembly contest, in which participants had to take their boards apart and put them back together as quickly as possible. Only one contestant would be worthy of the new prize, a Cooler Master CM Storm keyboard:

Good times were had at LANFest, which makes us more excited for their next event (only six months down the road!). Special thanks to ASUS, Gigabyte, and Antec for chatting with us, and a big shoutout to Intel for enabling gamers to make a difference in the global community.

Continue on for the photo gallery!