While at PAX Prime 2013 (full coverage here), we stopped by SEGA's booth to talk with Creative Assembly's James Russell, Lead Designer on Total War: Rome II. The game officially releases in about 4 hours from the time of this publication, so our discussion at PAX Prime focused more heavily on CA's game design philosophy for Total War games, the historic research conducted, AI/Engine enhancements, and why modding is important in gaming.

Let's jump straight to the video:

For the unfamiliar, the Total War series is a sort-of mix of Civilization, traditional Risk, and RTS gameplay all into one; it's almost 4X-like in nature, being that there's a top-down campaign map for conquest (turn-based actions, diplomacy, AI interactions) and low-level, real-time strategic gameplay (like any other RTS). For this purpose, the Total War series has historically been one of my most-played games given its versatility of playstyles and some of its deeper mechanical interactions on a strategic level.

When discussing the studio's design philosophy with Russell, it became apparent just how dedicated the team is to historical accuracy. Creative Assembly tasks its developers and designers with studying primary and secondary sources, rather than hiring independent researchers to inform the team separately; this places the game's devs closer to the final product, which Russell believes will create a more genuine and true-to-history feel within the game. In his elaboration of just how specific the team is when it comes to proper representation of the Roman era, Russell provided a few key examples: The animation team had discussions on whether a spearman would fight under- or over-handed, the economy team studied trade routes and currencies, the designers studied the Carthaginian senate, and so forth. 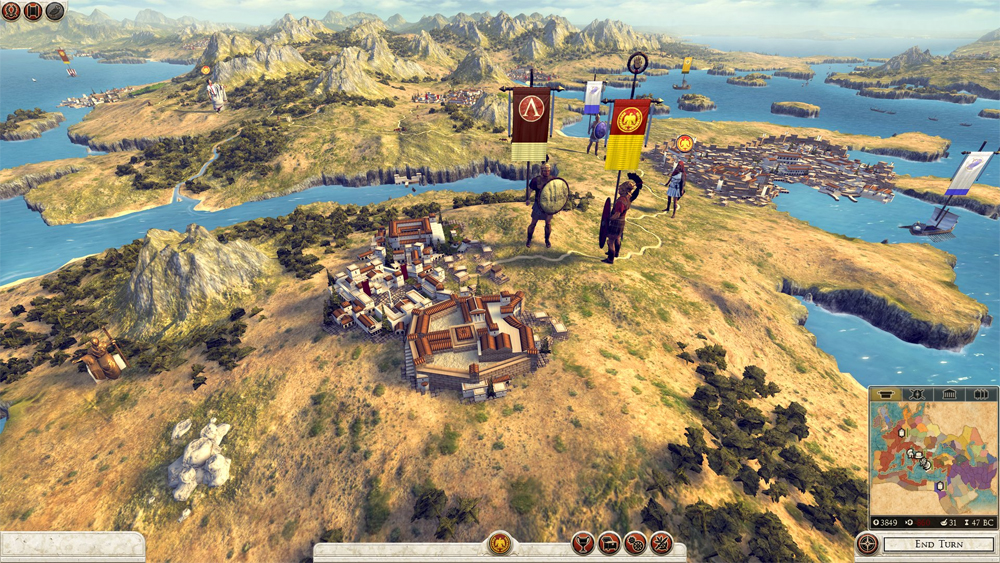 From there, we moved to discussion on the game's engine and AI enhancements over previous iterations. Creative Assembly has had thirteen years to perfect their mechanical design, and as such, recent engine rebuilds have created a foundation for CA to improve upon and add new functionality. For instance, ports can now be sieged by your force of Triremes, units can disembark and invade by ground or opt to bombard the city's walls for flanking ground forces; this fusion of land and naval battles is particularly exciting from a hardware enthusiast perspective, as I'm sure many of you have considered, and could make for particularly intensive benchmarking applications.

The team has also fully overhauled combat AI, which makes complex, on-the-fly calculations of flanking angles, combat stances, and line-of-sight. AI reacts differently to open city squares than it does in dense streets ofRome, for instance, and employs different tactics in each location. The stand-still-and-get-arrows-rained-upon-us AI of Medieval II is long gone.

Then there's mod support. Total War has always been fairly open in its .ini tweaking and Steam Workshop integration, and Rome II hopes to continue this legacy. Modders can expect toolkits shortly after launch, once the team has had time to recover from the final sprint.

For more information on Total War, check out the website here.