Extracurricular PAXtivities! Fun Stuff to do at PAX East 2012

Uh, when it comes to gaming culture and entertainment, that is. That was sort of embarassing, you really should learn to restrain yourself more, shouting is rude.

Why do they always throw it AT THE GUY WITH THE CAMERA?!

Aside from the arduous journey to reach PAX East 2012, which undoubtedly involves innumerable treacheries, like airport bathrooms and excited TSA agents -- oh, and the preparation leading up to it (we've provided a guide, here) -- PAX East requires a level of nerd-dome that has previously been considered unobtainable. Nothing quite matches the festivities of PAX and PAX East, and with PAX East 2012 coming up, we've got just the thing to keep your interest piqued: PAXtivities. Or, by their street name, community-driven events. That sounds lame (and it has big words in it, like "community") - let's go with PAXtivities. Way cooler - and simpler for pirates to say.

This feature takes a look at some of the fantastic events that are run by community members or are otherwise not part of the core happenings (concerts notwithstanding).

Have some neglected dice? Throw them in the freezer one too many times and they've finally given up on you? Or, maybe -- and curse you if this is true -- you've dropped them on the floor and they haven't rolled a damn twenty since.

Damn it, dice. Why?! You were meant to bring balance to the game table, not critically fail all saves!

Well, yer in luck, mate (yeah, yeah, don't ask - Paul & Storm have me in a piratin' mood). Rubikscube over at the PAX East forums has offered up a suggestion: Trade your unlucky, ungrateful, mischievous, half-microwave-melted dice for someone else's mistreated dice. It's for a good cause -- yes, we know it's hard to let your babies go, but sometimes it's --- OOOH! SHINY NEW DICE!

Yeah, yeah. Shut it. I know what you're all saying: "They're part of the main event," ya says, "they're not 'extracurricular,'" ya cries. Well, if Paul & Storm asking what a pirate's favorite fruit is doesn't qualify as extracurricular, ye be beyond help. PS: The answer is "banana." Yell it as quickly and loudly as you can. 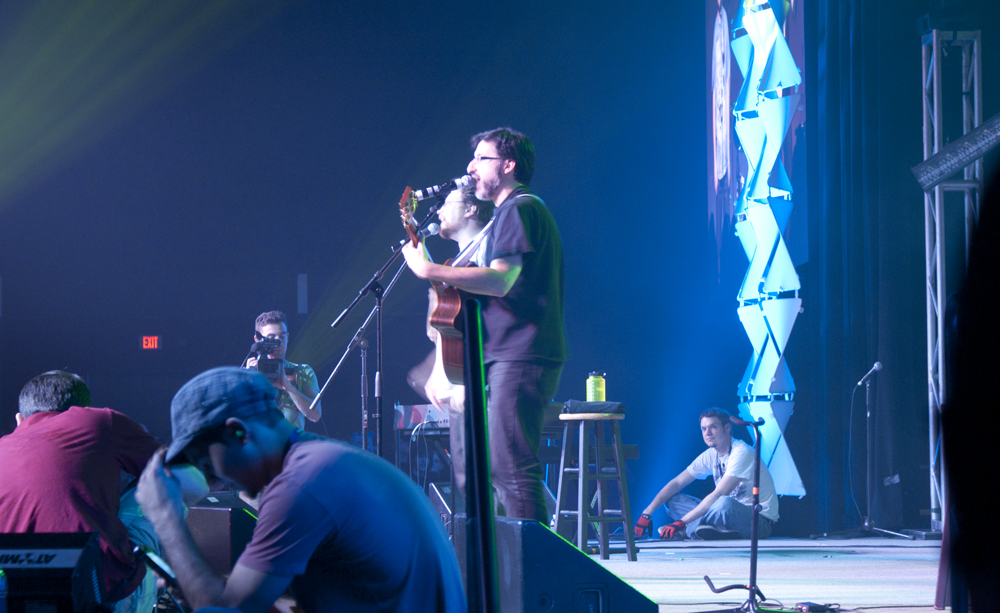 This thread on the PA forums noted that the original concert lineup we posted about has shifted, placing VGO, Paul & Storm, JoCo, and MC Frontalot in the same Saturday block as they've dominated in the past. Friday has equally awesome bands, boasting SuperCommunter (a newcomer, I think - I don't recognize that name), the Minibosses, Metroid Metal, and The Protomen.

Of course, there's also the Chiptune Jam every year in the Jam Space, so if you're a fan of old-skool music, check that out as well (during normal show hours).

Keep an eye on our site or on PAX East's official concert page for updates, although they tend to stay pretty static at this point: http://east.paxsite.com/ (bottom of the page).

Working for massive, subterranean assassin networks like GamersNexus.net isn't easy (if you don't hear from me again, recite the Dark Brotherhood's rituals). Luckily, we have junior assassins to do most of our bidding for us.

Assassins Ball is sort of a PAX East metagame, and as Grim's article about metagaming informs us, it's important to break things up with some self-inflicted pain. Or, uh, fun, as it may be. 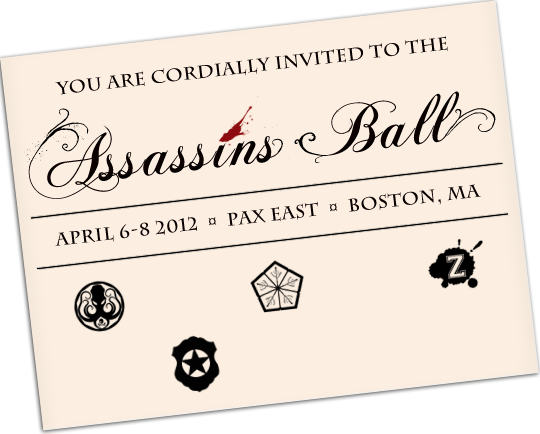 The game is semi-complex, but nothing a few minutes on the forum post can't handle (linked below). You choose from one of five factions and are then assigned missions to seek out assassins of the warring factions (signified by an insignia worn about the tremendous biceps that gamers, uh, wield?). Players are assigned specific targets for the most points, but can take out "generic" targets for a few extra points as well. I feel so bad for the enforcers. "Hey, how do I get to the Naga thea--BAM, DEAD."

Luckily, MarsChelios has done all the hard work for us over on the PAX East forums: With the rules and fancy graphics all laid-out, you can head over, purchase your "assassin kit" for a few bucks (only to cover the cost of materials, apparently), and start killing people. Just, you know, don't be a dick.*

* Wearing a cape of dicks is encouraged.

For those that are ritzy enough to stay at the Westin - aside from saying hi to us - you're lucky enough to be located in PAX gaming night central! Anyone can join, but it's of course much more convenient if you're in the Westin at the Waterfront where gaming night is hosted.

Pre-PAX (East) gaming night has been going on since its inception; it's a very complex setup that requires numerous core components, here's a detailed list:

We realize that not everyone wants to spend hours reading our above list, but it's worth it. In short: Bring your games, bring yourself (is that possible?), and show up at around 6PM on Thursday (Apr. 5th) before PAX East 2012 begins. From what I understand, the manager of the hotel has given us space on the mezzanine this year, meaning PAXers will have a dedicated location and won't bug the hell out of people in suits, as we did last year.

Oh, and tip the waiters nicely.

Want to join the PAX game night? It's mostly for board games, tabletop RPGs, and stuff of that sort, but you can certainly bring a laptop with your favorite games on it and see if anyone wants to join. Here's the thread.

This one's simple and involves three core elements: beer, beer, and Pokemon. The Pokecrawl is a sort of scavenger hunt with the goal to, quoting the official thread, "get as drunk as possible while participating in drinking games designed to get you there."

Pick your Pokemon, pick your drinks, and battle it out.

For those that like tabletop games and have effortlessly obliterated their oh-so-patient friends on many occasions, this is for you. It's also for those that are new to tabletop gaming or would simply like a break from the madness of the expo hall (believe us, it gets tiring).

Freeplay tabletop games can occur at PAX (in the tabletop area) or anywhere, really. There's no specific time. Post on the forums and find someone to play with, find a game you think sounds cool, and enjoy your time away from the madness!

I personally recommend Frag, Munchkin, MTG, and other games that can be wrapped up within a 1-3 hour timeframe. D&D, Savage Worlds, and other variants are great, but have a tendency to run long. They're best reserved for night time games, in my experience.

There's like, a whole city outside of PAX. Weird, we know. You may want to take a look at some of the cool things around Boston. Just be careful. Here's a list of places to eat that "food" stuff. The GN staff particularly enjoyed J Pace last year, although I'm not sure if they deliver. Great sandwiches from a local chain.

Oh, and that includes exploring INSIDE of PAX as well! The BCEC has many wild encounters... like these dancing enforcers:

Poke around, have fun, but stay safe.

PAX East 2012 is going to be a phenomenal year for gaming culture (something we write about frequently), so don't miss the opportunity to join in the fun. Don't worry about visiting every vendor and hitting every panel (several of them have two-hour waits); instead, pick your favorites and then spend the rest of the time enjoying company. Going alone? Jump on the forums and find something fun to do on your first day there, make some friends that you can grab food with. Going with friends? Get the hell away from each other. Don't spend every second together, chances are you each want to explore different things, so don't leave /autofollow on when you decide to go into stasis (it'll happen). 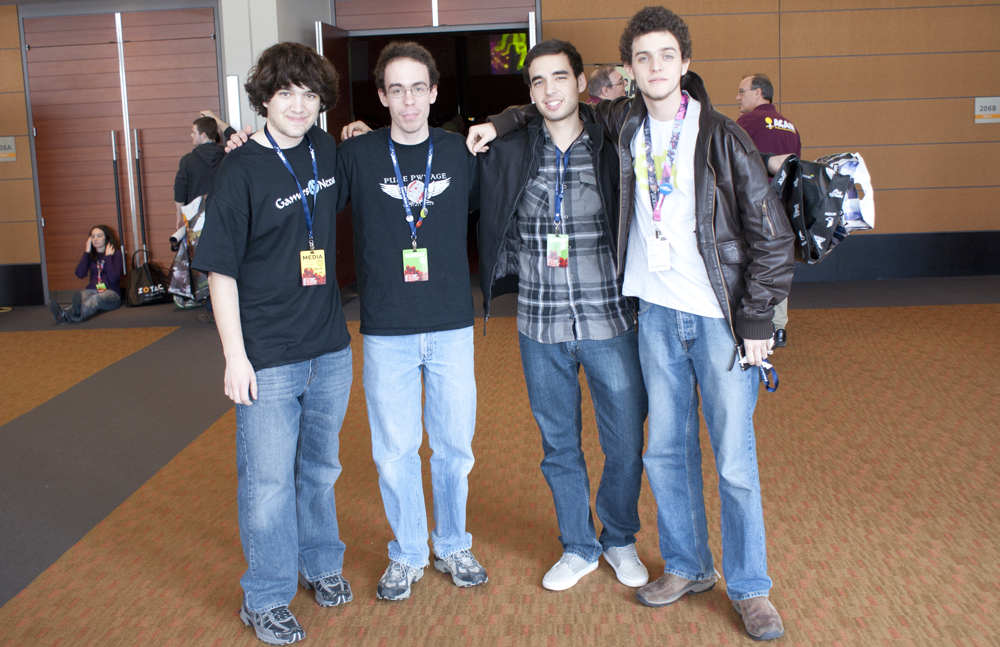 Have fun, all. Let us know in the comments what you intend to do or where you'll be, maybe we'll see you there!