The Intel vs. AMD argument is a tired one – as with our NVIDIA vs. AMD post, the “best choice” ultimately comes down to a number of personal factors, as well as one external factor: Whose “turn” is it in the back-and-forth cadence (though we may see changes as AMD backs out of high-end gaming).

Right now, Intel has faster processors with more instruction sets, brand new SSDs lined up for enthusiasts and consumers alike, and – the most exciting, maybe – new motherboards with upgraded everything. We were lucky enough to get some hands-on time with all of these at PAX East 2012 (which, at the time of writing, we are still in). More in-depth analyses of these will come shortly, but let’s get on to a brief overview of Intel at PAX East 2012.

Intel's buzzword at PAX East 2012 is “3rd Generation Processor.” They want to steer clear of the Sandy Bridge/Ivy Bridge labels and direct attention to the prior nomenclature. The message to gamers at the show is simple: “If you're not playing a graphics-intensive game, then everything you need can be produced from the integrated GPU on the processor.” This was flawlessly demonstrated by a nearby mini-ITX example system demonstrating SSF IV in full 1080p HD, running crisply and not missing a beat.

It’s true, though – with the integrated technology, we’ll soon be able to play many more games on portable and notebook-familial devices. Sure, the occasional Battlefield 3 might give a lower-end card trouble, but for the most part, this technology will only increase gaming’s viability as a global entertainment medium.

Does anyone here use FRAPS? Thought so (and if you don’t, pretend for a second). For all of us crazed, game-recording enthusiasts, Intel sent a shout out in our direction and it's called QuickSync. QS is an instruction set built into their newer CPUs with integrated GPUs (a la Sandy Bridge, Ivy Bridge). When combined with the Lucid Virtu package found on products like the Z68 chipset boards, it allows your system to intelligently select which graphics device is best for a given task. If you're playing an intense game, QuickSync will select your discrete GPU, but if you're trying to transcode your latest FRAPS game session, QS opts for the more powerful transcoding option - the integrated CPU/GPU combo. It's nice to have automated decision making as a guided solution to tedious problems – recording a video incorrectly likely means you won’t get a “do-over,” so it’s important that it gets done right initially.

Those of you that are thinking “QuickSync is old news,” you're right. The Sandy Bridge has it. The reason Intel is demonstrating it at PAX East 2012 is straight-forward: Sandy Bridge’s line of CPUs performed admirably, but the Ivy Bridge line (or 3rd Generation CPUs) has superior transcoding performance that transcodes faster than playback itself. Let’s put that in perspective: A five minute video can be transcoded from, for example, .avi to .mp4 in less than five minutes.

One of the most attractive products made by Intel is their SSD line. Intel's SSDs have been the standard for a balance of speed and reliability since the days of the X25-M, but that’s old news now! The offering at PAX East demonstrated a RAID 0 array of four Marvell-controlled SSD 510s. The terabyte of flash NAND storage offered a jaw-dropping 1Gbps+ of transfer speed – as we’ve explained in the “Understanding SSD Specs” post, SSDs are already several-fold faster in sequential and random data transfers than HDDs, but the PAX configuration blew it out of the park.

The on-site engineers also set up a demo of Rapid Start Technology (RST) that booted in to a new Intel co-developed game, Blacklight: Retribution, with special SSD benchmarking tools. One of the more fun options, for lovers of statistics, was its built-in test of HDD vs. SSD performance, giving a more secure idea of what your SSD is actually doing for you (we’ve talked about SSDs’ ability to make games perfectly seamless, but this is your chance to reinforce that).

Two of the engineers also spent a considerable amount of time with us discussing Smart Response Technology (SRT). I know, I know, SRT, RST, IIRT, so many acronyms so close to the same composition, oi! SRT may be the most under-utilized product that PC builders need to know about, but that’s something a bit more complex than this basic overview will allow – we’ll have a full analysis of what you can get out of SRT (and how) shortly. Keep an eye on our twitter, facebook, or RSS feeds for updates. 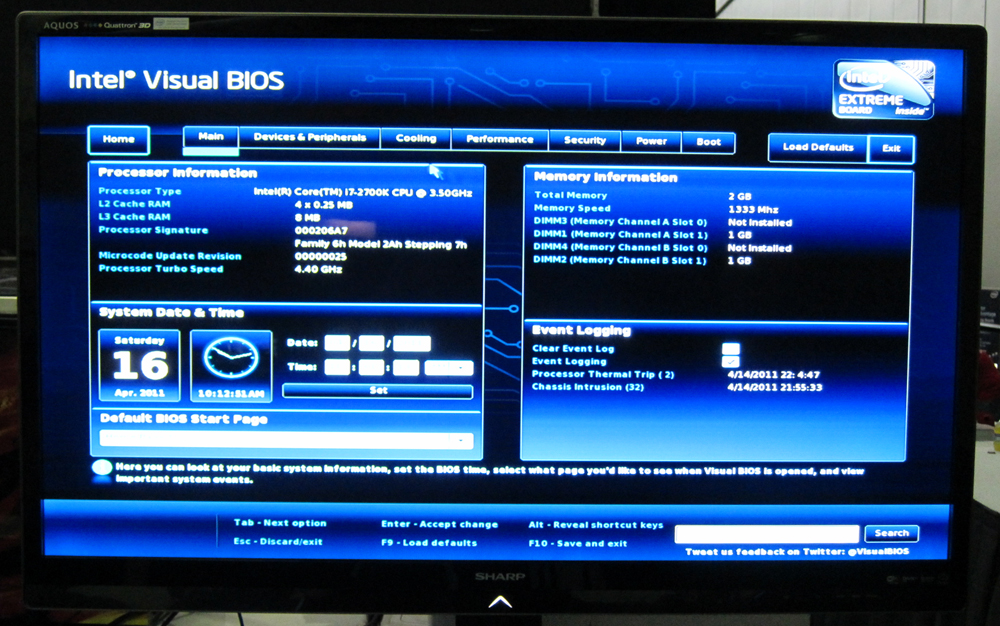 No, really: daaaaaang. It's that good. Like the engineers at the booth amply stated, Intel doesn't just want to be a player in the enthusiast market, they want to be known as the best. UEFI or GUI BIOS has been around for over a year now (GN got to work with MSI’s version during PAX East 2011), but it’s only getting stronger. As demonstrated in the image, Intel's Visual BIOS doesn’t only look impressive, it’s highly functional. It works amazingly well and feels fluid, even for those of us that are used to the eye-melting interfaces of yore. We were impressed with the depth of configuration and ease-of-use, two terms that, prior to 2010, were rarely associated with BIOS.

For all of you who have been thinking of getting into overclocking quite yet, we have one encouraging tool: slider bars. You just slide the bar to the desired CPU/GPU/Memory clock frequency and Intel takes care of the rest. It’s pretty hard to mess things up under the guidance of newer Visual BIOS implementations.

Mark Chang, Intel's man-on-the-scene, put forth a very simple equation for those looking to build a system: Z + K = OC. In other words, buy yourself a nifty 2500, 2600, or 2700 K-series CPU and pair it with a Z-series motherboard and - BOOM! - you're instantly good at overclocking. Sort of, anyway. The Z77 isn't just a good reference board built by Intel, though -- the skull-decal’d chipset carries a pretty menacing feature set and a simple message: “We're not average.” 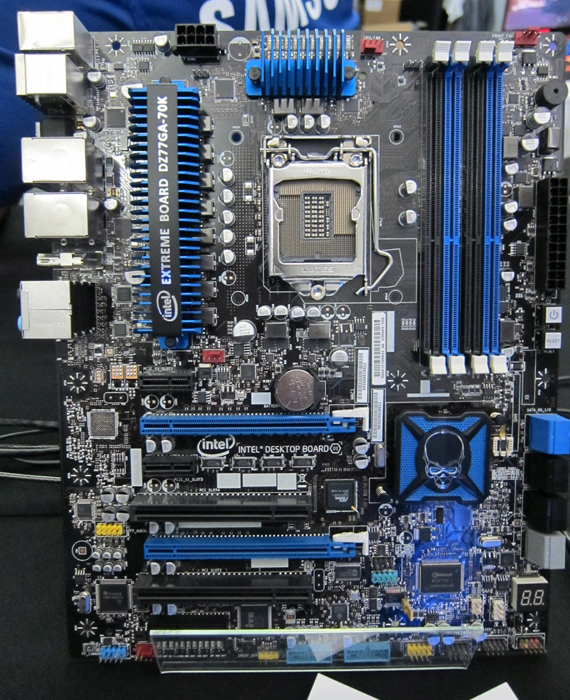 The Z77 board that was on display had enough ports, connectors, and prefab features to match any high performance motherboard on the market. If you're thinking of building any PC in the >=$700 price range, the Z77 should be a serious consideration.

NUoC (Next Unit of Computing)

Continuing on the topic of amazing motherboards, the Next Unit of Computing – a board that is approximately 4”x4”, packed with Thunderbolt, HDMI, and USB3 connectors – made an impressive display for miniaturized computing. This mighty mite packs a ton of punch in a tiny package. The board makes for an awesome HTPC candidate, helping to continue Intel’s legacy as a diverse and versatile brand name.

It was also suggested that businesses could greatly benefit by using these tiny motherboards to do more complex digital signage.

The miniscule 4”x4” board supports most i3 and i5 CPUs in a BGA package with no IHS. The other major chips on the board are SuperIO and Thunderbolt controllers, though it also has two mini PCI-e slots for possible Bluetooth/802.11 combo cards and two SO-DIMM slots.

Other products that were on display were a variety of UltraBooks. These are laptops running Intel's 3rd Gen Processors that are less than an inch thick and equipped with SSDs or hybrid drives. One final sneak peek is that Intel hinted at a very soon-to-be-released Enterprise Class PCI-e SSD.

That’s it for now. Back to the expo hall! We’ll have more news on each of these items as time allows and data comes in.