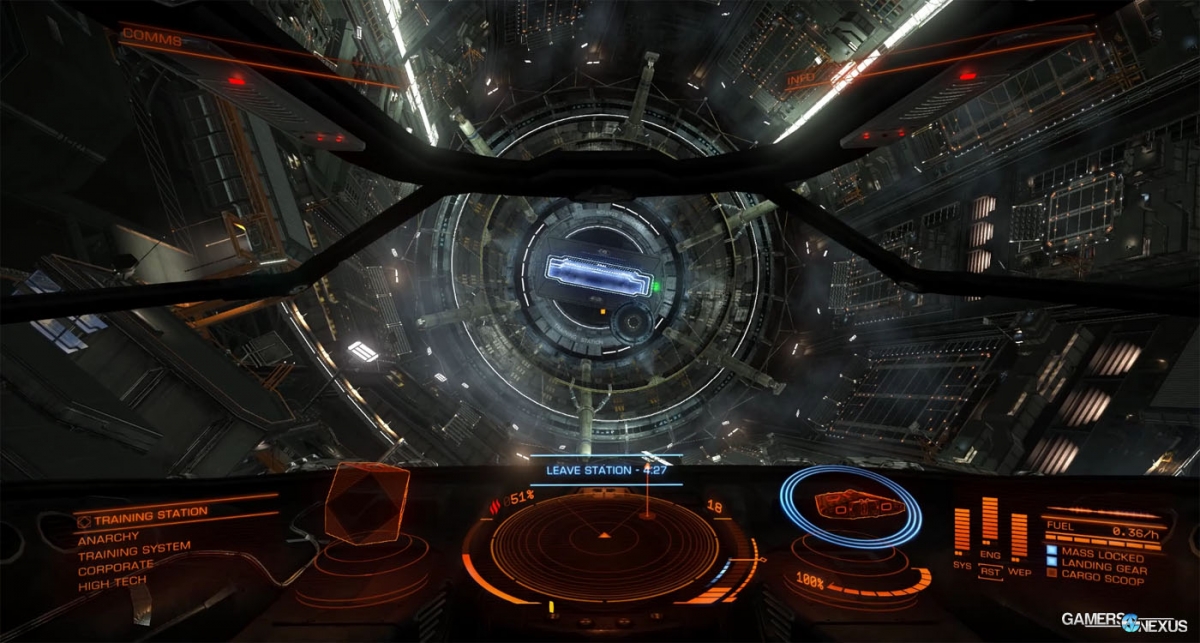 The game isn't nearly as GPU-intensive as Star Citizen's current alpha build (which we also benchmarked), but still warranted testing.

The above video shows Elite: Dangerous at maxed-out settings with 1440p super resolution (filtered down to 1080) on a GTX 980. Tests were also conducted at 4K and 1080p.

For this test, we varied the Elite: Dangerous settings between 1080p, 1440p, and 4K using super resolution tech. We tested each video card for 120 seconds in an identical circuit on the Launch training mission, using max settings and 4xAA.

We used FRAPS' benchmark utility for real-time measurement of the framerate, then used FRAFS to analyze the 1% high, 1% low, min, max, and average FPS.

The system was kept in a constant thermal environment (21C - 22C at all times) while under test. 4x4GB memory modules were kept overclocked at 2400MHz. All case fans were set to 100% speed and automated fan control settings were disabled for purposes of test consistency and thermal stability.

At 1080p, we found Elite: Dangerous to be playable on effectively every budget or better video card. Even last generation's 1GB 7850 played at 53 average FPS, an impressive feat for what was once a $130 video card. The 250X lands in “unplayable” territory on max settings, but dropping to medium settings resolves this and puts us closer to a consistent 50FPS.

Using the new super resolution technology from both major GPU vendors, we're able to force render the output at higher resolutions and then filter it back down to the native display resolution. The scaler and filtration process is removed from the graphics pipeline, so the FPS impact is representative only of what would be experienced on a true 1440 or 4K display. NVidia's DSR exhibits about a 1% FPS drop during the filtration process; AMD exhibits no additional filtration FPS drop due to the location of the scaler in the render pipeline.

This allows for accurate simulation of a true 1440 or 4K experience, which is what we've got to use until a point when we have higher resolution displays available for testing. VSR & DSR also improve overall graphics fidelity, largely by eliminating jagged edges on skinnier objects (railing, grass, things like that).

At 1440p, all devices suffer from a large and immediate performance drop. We tested with SMAA and 4xMLAA, both of which yielded similar results (read: performance difference within 10 frames) despite the significantly increased pixel count.

Because VSR is not available on the R9 290X, we could only test the R9 285 at 4K resolution against the GTX 980. Both are questionable in performance, though a few settings tweaks would make the GTX 980 playable at 4K (“high” settings with SMAA should do it). The R9 285 is unplayable at 4K.

Noticeable Tearing Issues on All GPUs

Unlike our experience in Far Cry 4, frame tearing was GPU-agnostic and prevalent throughout Elite: Dangerous and on all devices. We imagine this will only be resolved with game patches going forward. The display will also occasionally exhibit a noticeable “vertical scan” upward as frames are drawn, resulting in a somewhat displeasing gaming experience. We hope that the Elite: Dangerous team can patch this up shortly.

Overall, the game loads the GPU minimally and doesn't seem to do much with the CPU, either – though certainly a bit more than other games. For users playing at 1080p on max settings with a minimum 60FPS requirement, we'd recommend the R9 270X ($165) as the highest cost-to-performance solution. If you're OK with turning a few settings down to “high” or “medium” from our tested ultra & high options, the GTX 750 Ti ($140) will easily support Elite: Dangerous at 60FPS with tweaking. We'd recommend an nVidia GTX 770 ($285) or AMD R9 285 ($240).