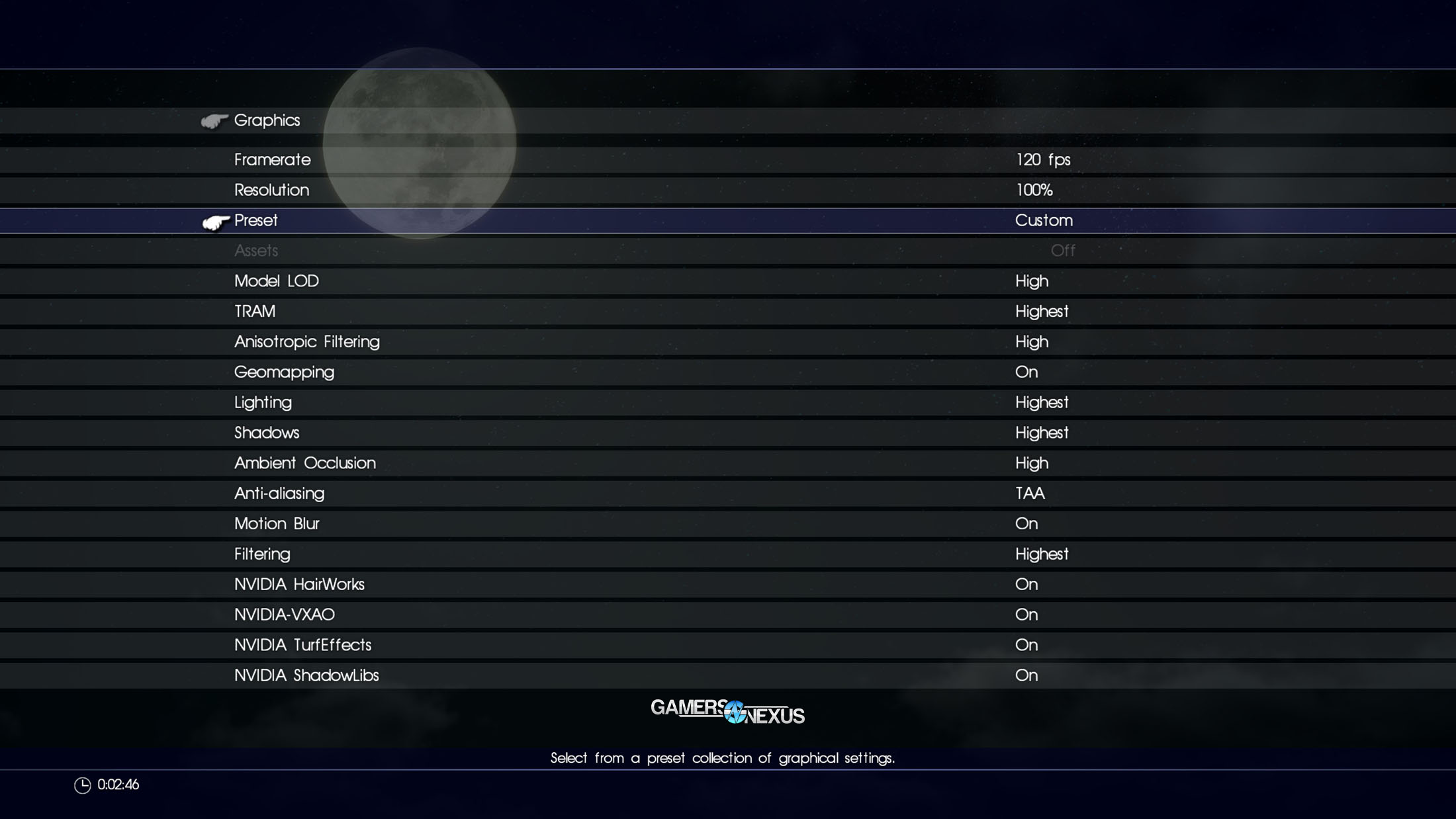 The only oddball setting listed above is TRAM, which we set to highest--this controls the amount of VRAM that the GPU can request, which indirectly controls texture LOD (there is no separate texture quality setting). The Xbox didn’t seem to have any problems keeping textures in memory, but the “Average” setting on PC caused visibly low-res textures on objects more than a short distance away, so we turned it up. FFXV doesn’t offer extremely detailed graphics adjustment, so this kind of indirect effect is seen in other features: for example, adjusting lighting affects reflections, and the NVIDIA Flow toggle isn’t surfaced at all. The “NvidiaTerrainTesselation” toggle that was accessible by modifying the benchmark config seems to be under the Geomapping label, but enabling this option also causes an increase in plain old rocks.

Before the comparison, a few things to note about the engine: We noticed that it appears as if Square Enix is using PBR shaders, or physically-based rendering, in Final Fantasy XV. PBR is calculated based on metalness and roughness of a surface, and mirrors real-world lighting behavior. In a full implementation, this would include conservation of energy, physically correct distribution patterns and material definitions for conductors and dielectrics. In the case of Final Fantasy’s implementation, this shot of the truck chrome best illustrates some simple PBR implementations where the material is both rough and 100% metal, and so we get reflections that are rough across the surface.

Sub-surface scattering also appears early on, where an in-game rendered cutscene gives us a glimpse of light scattering beneath the surface of the mechanic’s nose. The fact that you can see blood capillaries beneath the surface of the nose, particularly as found at the border of shadows, tells us that sub-surface scattering is used in the game. In the CG world, like for movies, this is a relatively expensive light bouncing technique that requires tracing light rays beneath the material surface to determine how light would interact with the blood beneath the surface of skin. In traditional examples, we could show you images of ear lobes, fingers, or other areas of the body with thin skin, where a red tint can be seen from blood beneath the skin’s surface. In Final Fantasy, cutting our video back to the mechanic, the subsurface scattering is apparent in the nose, but we also believe this is cheated-in. That’s OK, though, because the approximation looks good and reasonably accurate, and is also much cheaper on system resource consumption. 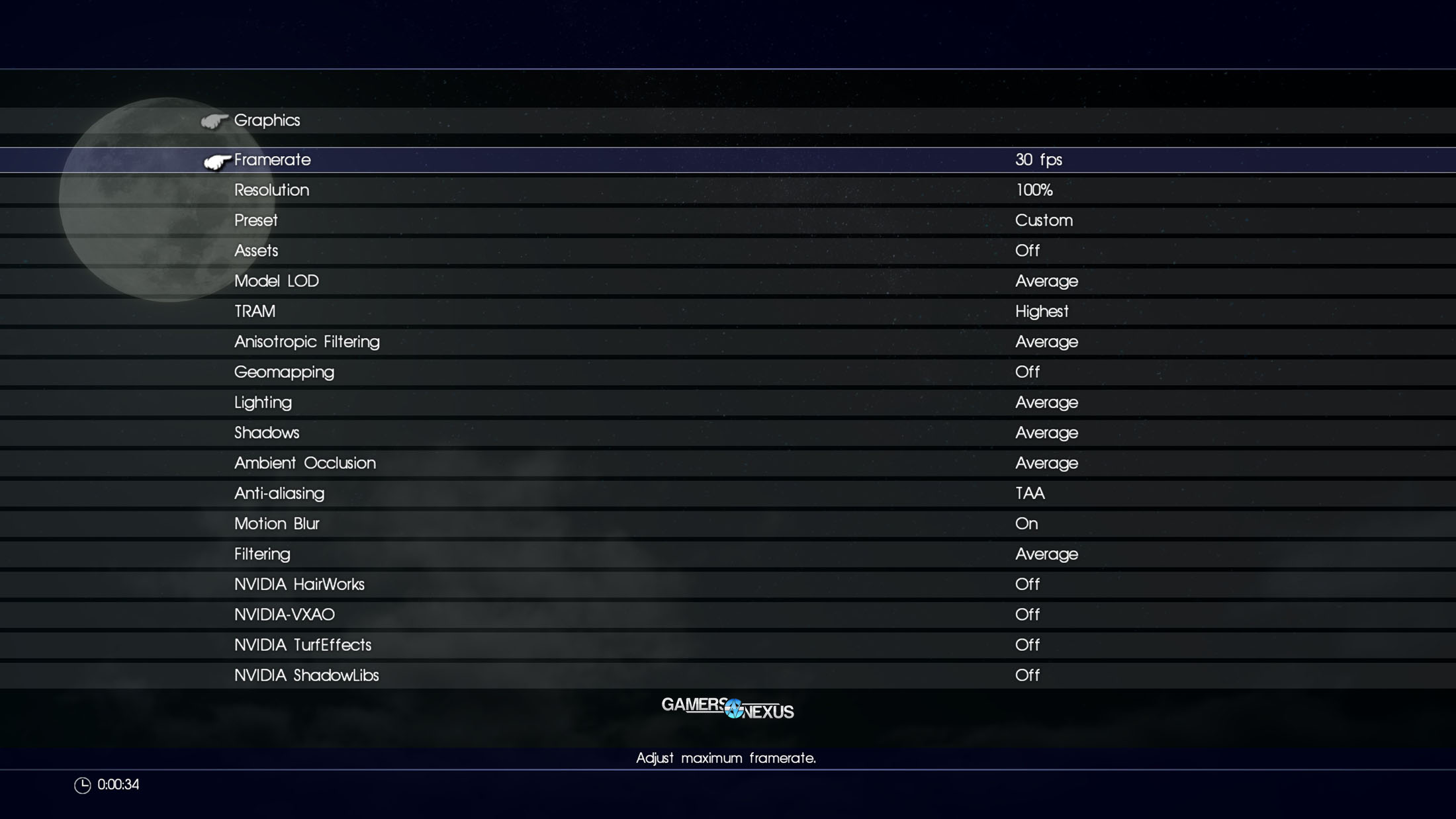 Comparing the Xbox One settings versus the PC with max graphics, we can see where the differences emerge – and where some don’t – between the two titles. Square emphasized that this was more than a port, and so we should see this as apparent in both graphics and mechanics.

As for foliage and Turf, foliage is sparse at these lower settings, and grass animations are stiff, with tufts of grass clearly constructed of flat planes as usual, rather than any sort of particle meshes as we think Turf uses. Bare patches of ground are flat textures with a few three-dimensional rocks scattered over the surface, and enabling geomapping gives us terrain tessellation and other effects that deform the ground to create apparent depth. Grass thickens with Turf enabled, though we never did notice the dynamically reactive grass in the part of the game we tested.

Later on, a campfire reveals that NVIDIA Flow is disabled with lower settings, despite the lack of a menu option, and hairworks is definitely not in use, although elaborate fur is still possible without it, as seen in both the Xbox and PC versions when the bird swoops down. HairWorks is in use on some mobs, as we showed when we tested the demo, but not on the main characters – they’re using meshes, which we scraped from the game to confirm. For view distance, there’s visible radius where shadows appear under trees and distant terrain, and shadow pop-in is a noticeable problem in all settings configurations.

For the highest settings on PC, as a side note, we did notice some odd graphical bugs that appeared with these settings, but no dealbreakers. Dithering showed up on locations like the margins of the road where it fades into dirt, probably due to TAA. TAA was enabled for every test, including on the Xbox, and the dithering was present but less visible with Xbox settings--it could be that it’s intensified by the terrain tessellation on the roadside. There’s also a transparency issue with at least the decal on the cab of the Hammerhead tow truck, and possibly more. 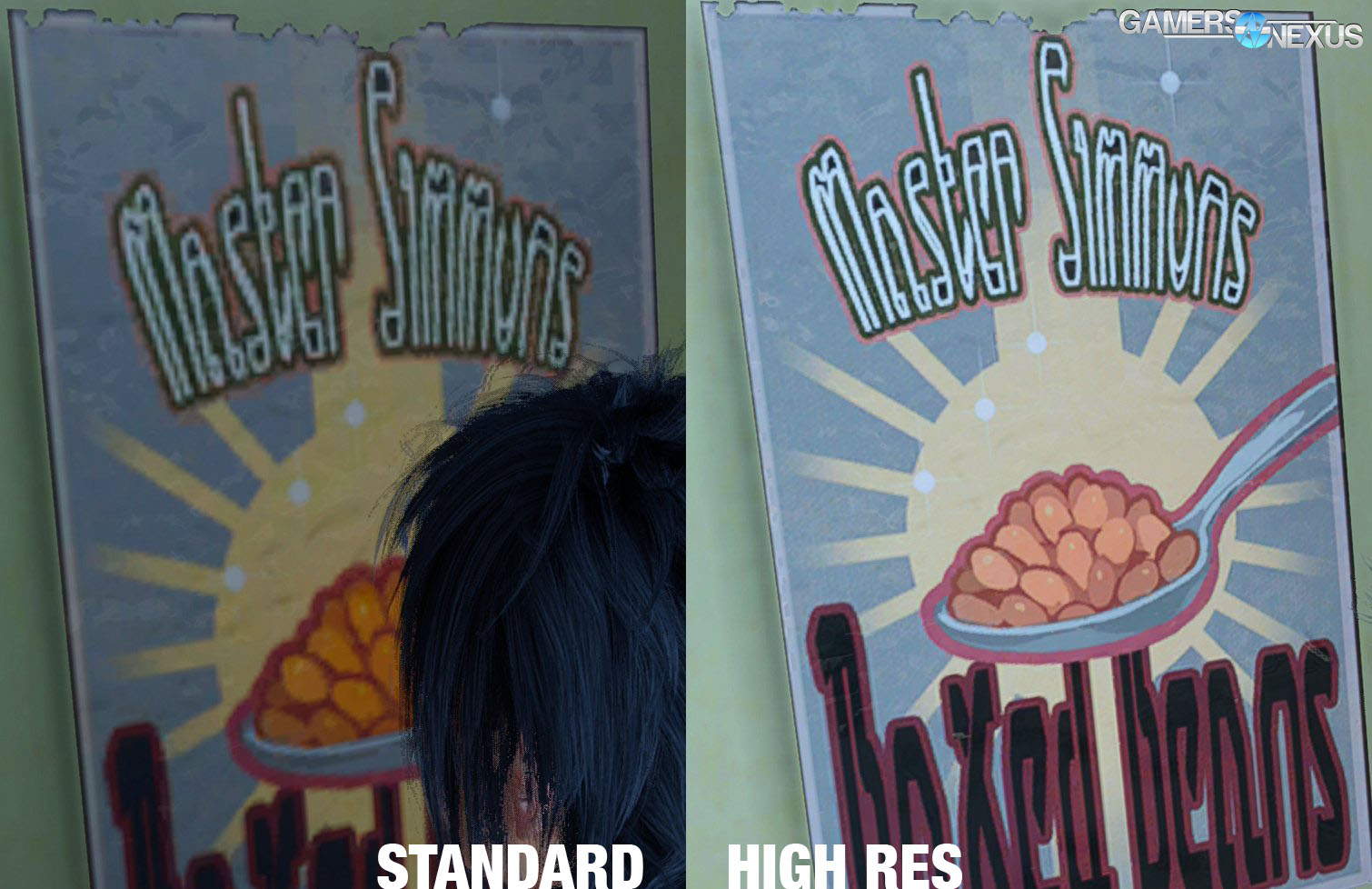 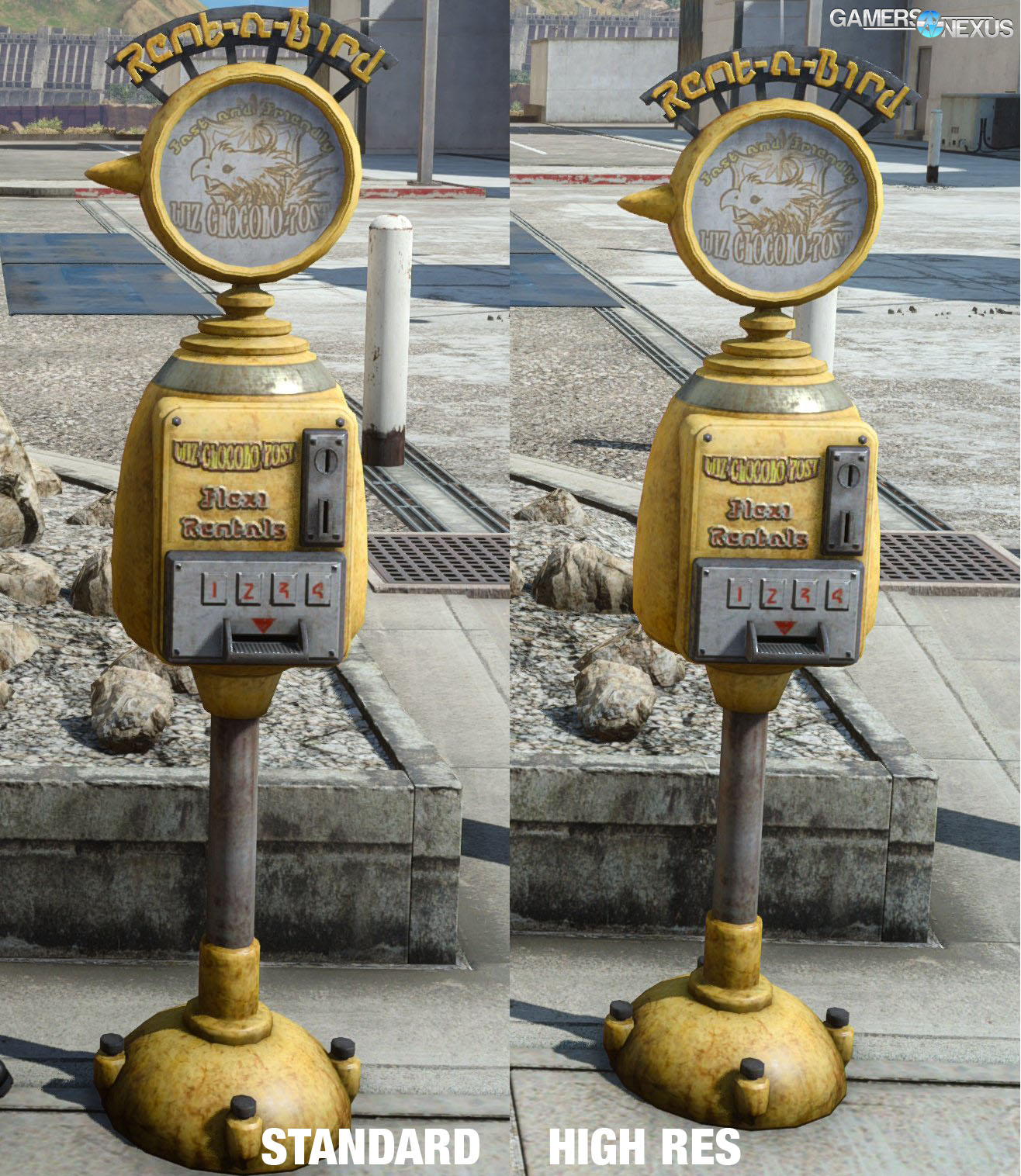 Finally, we downloaded the high resolution asset pack. The prerendered 4K cutscenes that make up the bulk of this pack aren’t important to us, but the higher resolution textures do make a difference in some areas. As far as we’re aware, the asset pack changes nothing other than cutscenes and textures. Not every object is visibly improved, and important items and characters are already high-quality enough that they look identical, although tiny details like fabric textures are visible up close. The biggest improvements are seen up close on bits of scenery, especially posters with high-contrast lettering that loses definition when compressed and dents and scrapes on metal objects. Out of curiosity, we briefly tracked VRAM usage with the texture pack enabled and disabled, but the amount of memory used appears to depend on how much the game is allowed to request based on the TRAM setting.

FFXV: Windows Edition is definitely the best-looking version of the game, and it’s refreshingly easy to spot the improvements. TurfEffects and terrain tessellation add visibly to the game visuals, though it remains up to the player to determine whether those gains are worthwhile: Square Enix has done exceptionally well to address our many concerns in the benchmark, but there is still a required hit, as always, for improved graphics. In the case of grass, it becomes more significant as grass becomes denser and more prevalent in the area, and that performance loss won’t be worth it on some hardware configurations. The 65GB asset pack isn’t necessary for anyone that can deal with a little blurriness in their prerendered cutscenes: even at 4K the improvements are minor, and 155GB total is a lot of space for a game that should be running off of an SSD. On the other hand, the asset pack is free, so the downsides don’t really matter.

Watch the video for Steve’s take on this game’s graphics.