Grand Theft Auto V took its time to migrate to PC, and from our preliminary overview and testing, it seems like the wait was worthwhile. GTA V's PC port exhibits unique PC features, like a VRAM consumption slider indicative of the maximum VRAM requirement of the current settings. The port also added first-person mode, complete with new 3D models and animations for the characters' arms, phone, guns, and what-have-you. As you'll find out in our benchmark results below, the game is also incredibly well-optimized across most graphics card configurations, something we can't say has been true for most games in recent history.

These things take time, and RockStar certainly took as much of that as it needed.

This article makes no intentions to comment on gameplay value.

GTA V has fairly complex PC settings, allowing great performance optimization capabilities for systems that require fine-tuning. Among other settings, the game includes sliders for population density and variety, distance scaling, view distance, and so forth. Most settings span Normal to Very High, with some jumping to Ultra. In general, for purposes of this article, when we refer to “ultra settings” for testing, we mean that we're using the maximum settings permissible under the “graphics” tab. This does not include advanced options. Not all settings have an “ultra” preset; in these instances, we set them to their highest option – usually “very high.”

MSAA was left off for all tests.

In our gameplay testing, it was determined that a framerate of 40FPS or greater is preferable for an enjoyable experience. Closer to 50 is better. 60FPS is unnecessary for playability with GTA V, as it is not a high-precision title.

Let's briefly break-down some of the core settings:

Population Density: This slider can be incremented to increase the number of on-screen NPCs rendered at any given time. A greater density means more civilians and civilian-operated objects will be rendered at the cost of performance. This impacts CPU and GPU performance with increased drawcalls and poly-count.

Population Variety: (Informed speculation) How many individual actors are rendered before reusing models or objects. The full depth of this setting is not yet understood.

Distance Scaling: Impacts your view distance of objects and geometry in-game. Higher values will allow the player to see objects with greater detail from farther away.

Texture Quality: Has the greatest impact on VRAM consumption. If you're exceeding VRAM and find it to hinder performance, decrease this setting to instantly retrieve large amounts of memory. Impacts the resolution of rendered textures.

In-Game Depth of Field Effects: DOF enables a filter pass-through for graphics that appear at varying levels of depth within the game. Enabling this filter allows for higher-fidelity graphics, but hits the GPU hard.

The above video showcases one of our two GTA V benchmark courses. The above benchmark uses an in-game utility with 100% consistency. Our internal bench saw us driving a car around a circuit within the downtown area of the starting region.

The latest 350.12 GeForce driver was used during testing. AMD's 15.4 Catalyst Beta was used for its GTA improvements. Game settings were manually controlled for the DUT. Overclocking was neither applied nor tested, though stock overclocks (“superclocks”) were left untouched.

VRAM utilization was measured using in-game tools and then validated with MSI's Afterburner, a custom version of the Riva Tuner software. Parity checking was performed with GPU-Z. FPS measurements were taken using FRAPS and then analyzed with FRAFS.

Operating at 4K resolution and approaching 4GB of VRAM consumption, GTA V performed exceptionally well on the ~$1100 2xGTX 980 SLI configuration and moderately on the Titan X single-card solution. The GTX 980 hovers just below what we defined as a playable framerate for GTA V, making it sub-optimal for 4K Ultra settings. AMD's R9 290X, even with its 4GB of VRAM, struggles to hit 30 FPS and has the lowest 1% drops of all cards in 4K testing.

“High” settings are a little different. The GTX 780 makes an appearances and sits just below “playable,” and after some small tweaks, it'd easily sustain 4K resolutions with medium-high settings. The R9 290X is capable of supporting 4K High settings at a playable framerate, with the 980 and Titan X once again excelling. 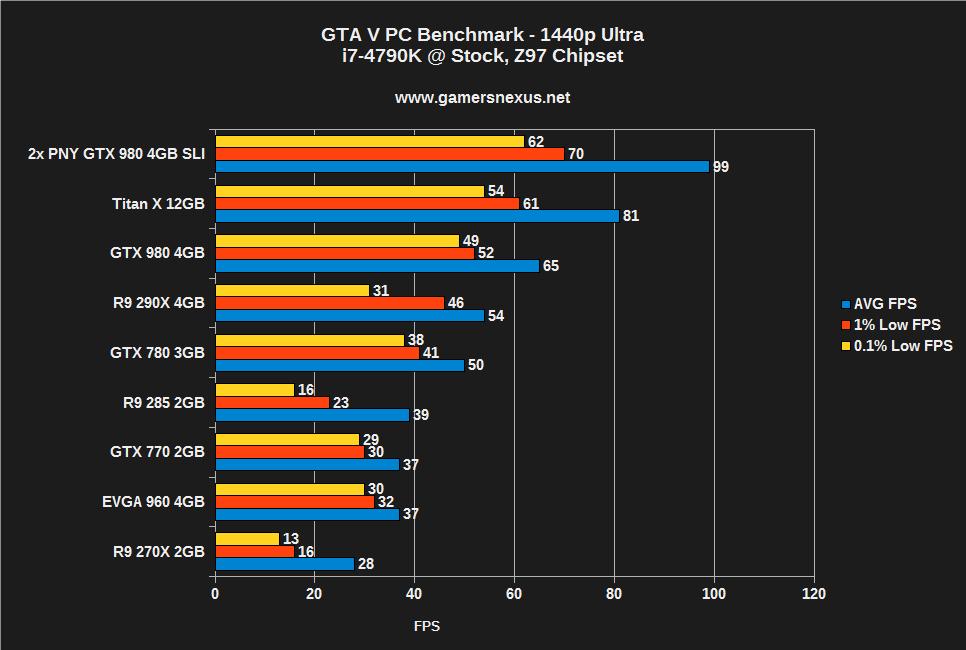 As you'll find out in our forthcoming Titan X vs. GTX 980 SLI benchmark, the SLI configuration outperforms the Titan X (though requires more wattage) in GTA V. As for the more affordable video cards, a 1440p resolution with Ultra settings can be sustained by effectively all mid-range cards in the $200+ area. The GTX 770, with some tweaks, can play at 1440p and very high settings; the same goes for the R9 285 and GTX 960 4GB video cards.

Although it isn't shown here, the GTX 970 would perform similarly to the GTX 780 in the above chart. 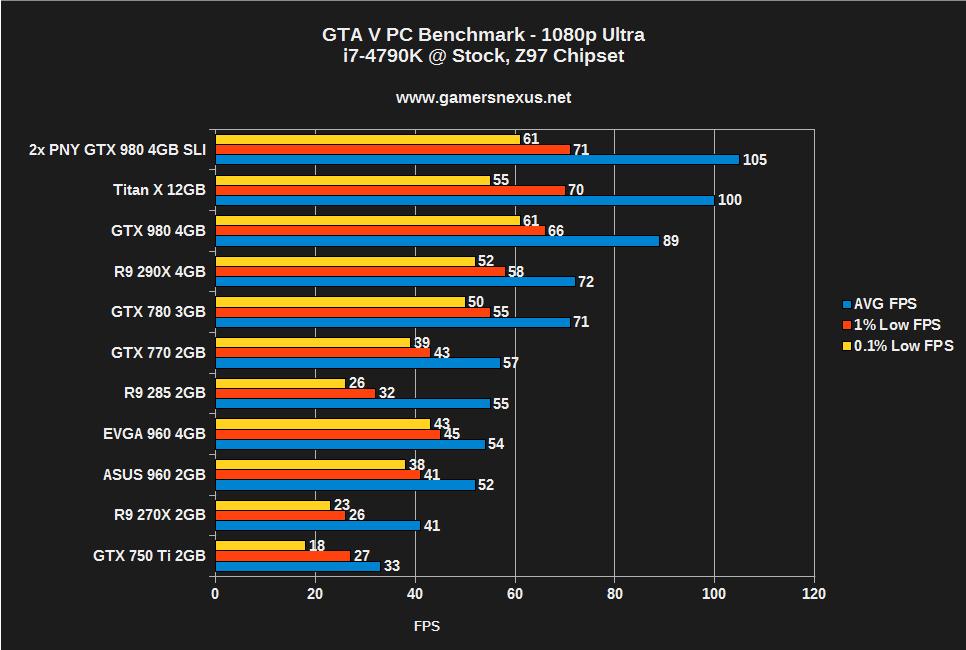 The bare minimum for 60FPS framerates at 1080p with Ultra settings would be the GTX 770 or R9 285 / 290, both of which hover just below 60FPS. Dropping one or two settings to “Very High” will ensure a consistent 60 FPS, though the game is easily playable at 40-50 given its playstyle.

Below is the chart for “high” settings, which introduces some lower-end cards to the playable range. 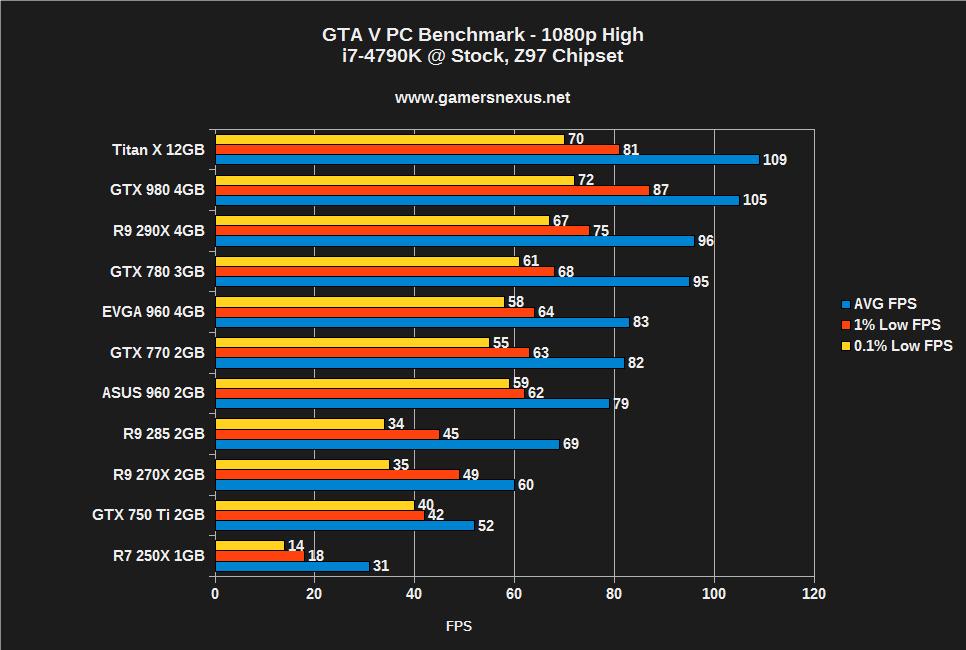 Note: The R7 250X is the only card we tested on "normal" settings (dropping everything to "normal"). At these settings, it sustained an average FPS of 70 -- fairly high. The game doesn't look great, but it is playable.

Conclusion: The Best Graphics Cards for GTA V on PC

GTA V's in-depth settings and VRAM meter make for easy tuning, which ultimately results in better performance optimization on a per-config basis. The immediate driver launch from both AMD and nVidia help with day-1 performance and stability, backed-up by RockStar's own ability to develop a stable title. It's not perfect – we have seen GTA V crash – but it puts Far Cry 4 and Assassin's Creed Unity to shame.

As for which video card is best for GTA V, the answer comes in a few forms:

Note that performance will vary between configurations. Let us know your results and specs below!