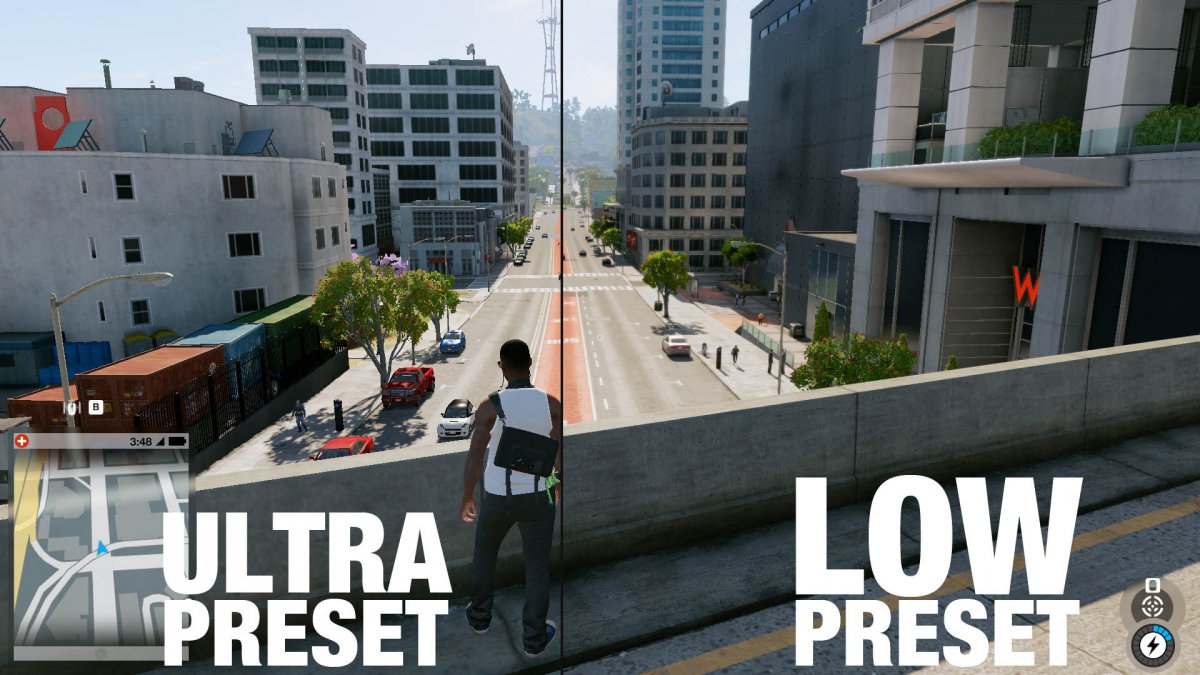 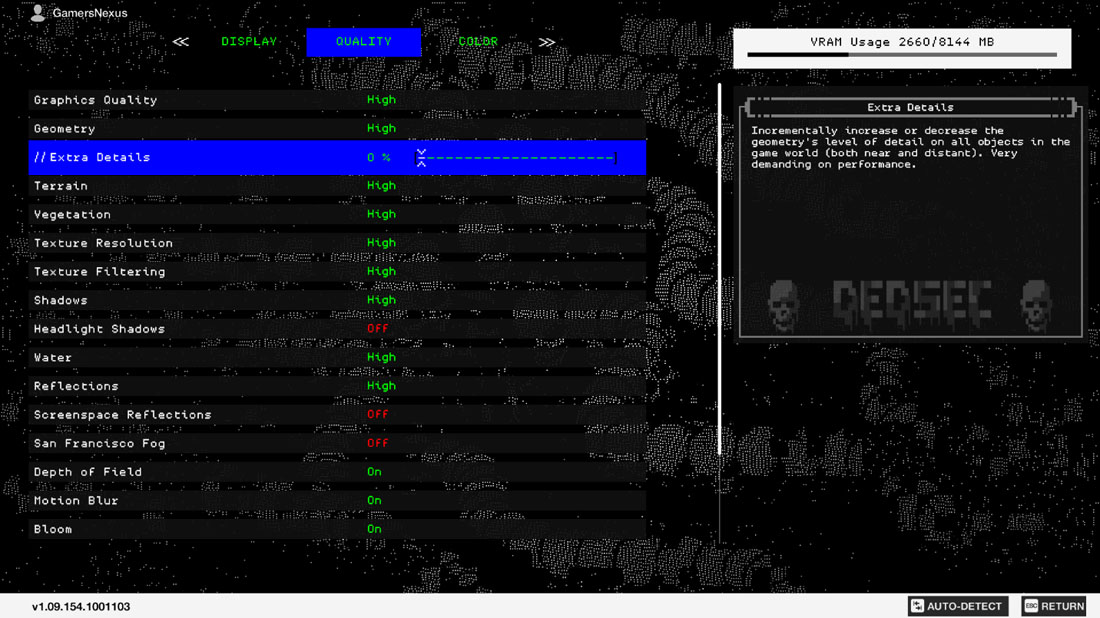 Below, we’ve re-pasted our graphics settings explanation from our Watch Dogs 2 GPU benchmark. That’ll get us started.

Geometry: Density of primitives / overall "smoothness" of objects and models within the game. Affects geometric complexity and mesh quality.

Extra Details: Adds definition to geometry in game, including meshes (more smoothing, finer detail on vehicles, etc.). Sets 0-100%. This does not get applied with any of the presets and must be manually configured.

Terrain: LOD scaling of terrain. Detail, definition, and smoothness of terrain as it grows distant from the player POV.

Texture Resolution: With the base game, without texture DLC, this can be configured to Low, Medium, and High. Texture resolution changes necessitate a game restart to adequately apply. Texture resolution impacts the pixel density and apparent grit in (obviously) object textures.

Headlight Shadows: Maximum number of vehicles that will cast headlight shadows. This becomes performance intensive when it's dark, rainy, and heavily populated.

Screenspace Reflections: Pixels are depth-sampled and crunched to determine screen space-aware reflections, e.g. within puddles that appear during rain. If experiencing lag when it rains in Watch Dogs 2, try lowering this setting and the headlight shadows setting.

Bloom: "Shimmering" effect for light when in hot environments or near bodies of water.

Ambient Occlusion: SSBC and HMSSAO modify the accuracy, depth, and presence of shadows created at points of contact between surfaces.

Temporal Filtering: Frame-to-frame calculation of filters, rather than calculating all at once. Improves performance.

Post-Process Anti-Aliasing: Simplistic anti-aliasing with limited impact to FPS. This is best known for FXAA, the most common implementation of Post-Process AA. 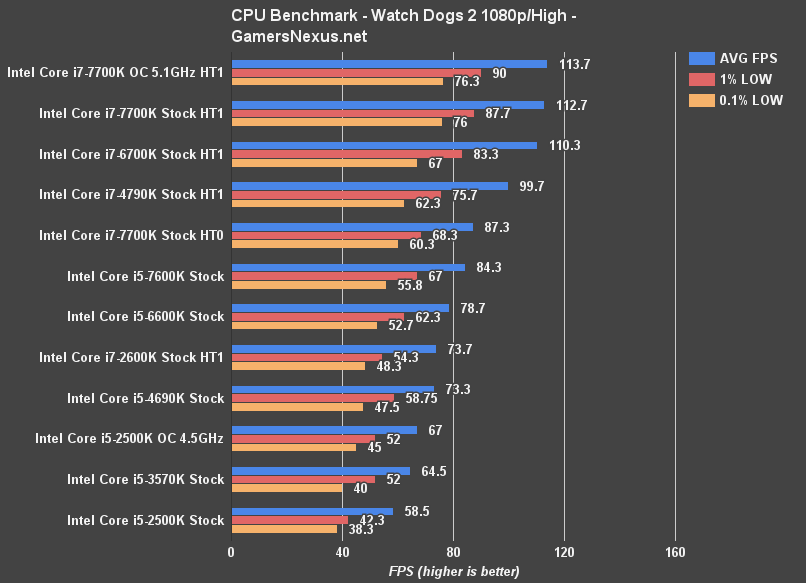 This chart from our 2500K revisit shows Watch_Dogs 2 performance across a variety of CPUs using an EVGA GTX 1080 FTW. Unusually, there are major performance dips between (for example) the i7-6700K at 110.3 FPS and the i5-6600K at 78.7 FPS, and only the newest i7s level out around 110 FPS average in our benchmark course even after overclocking (indicating they’ve reached a GPU limitation). This means the average user, even one without a GTX 1080, is in real danger of a CPU bottleneck.

The purpose of this test was to find which settings have the greatest impact on the CPU, and which can be turned down to find the optimal balance between framerate and visual quality. From the settings menu, we chose geometry, extra detail, reflections, vegetation, and terrain as our test candidates.

We continued to use the same methodology described in our GPU benchmark, logging framerates with FRAPS while walking down a short hill. In the course of our testing, we found that our average framerate for the “high” preset increased by roughly 4 FPS since our 2500K revisit, which can be attributed to a combination of normal variation and a new optimization patch from Ubisoft. The major aspects of patch 1.09 were changes to RAM usage, screenspace reflections, and fog changes, none of which significantly affected our benchmarks below the “very high” setting (the point at which screenspace reflections are enabled).

In our earlier Watch_Dogs 2 GPU benchmark, we simply grabbed the best CPU we had on hand in November (an i7-5930K) in an attempt to create a GPU bottleneck. In this test, we needed to create a CPU bottleneck, and therefore chose the i5-6600K, which we’d already shown to be limiting performance in the previous tests. We did continue to use a single GTX 1080 despite the need for the best possible GPU performance, as initial testing with two 1080s in SLI showed negative scaling (however, nVidia has since released driver version 378.49, which supposedly improves SLI performance in WD2). Driver version 376.33 was used for all tests.

In addition to our baseline high preset test, we also tested low, medium, very high, and ultra presets, and then increased extra detail to 100% and set shadows to NVIDIA HFTS to max out the settings.

At that “max” setting, we recorded lowered performance with an average of 45 FPS. This could be due to GPU limitations, especially with the extra-demanding shadows—and the same could go for the 70.75 FPS average at ultra, although HFTS shadows weren’t used there. It’s worth noting that on our test bench at 1920x1080, HFTS shadows were patchy and grainy—definitely not an option to select on any computer with performance issues. 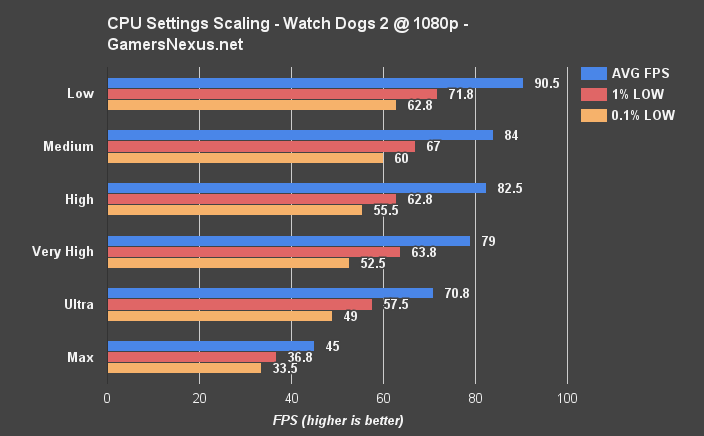 Overall performance showed a fairly linear increase as the presets decreased from Ultra to Low. High is the lowest preset that doesn’t sacrifice serious graphical quality, and there’s an obvious difference in every texture between High and Medium—reflections, texture resolution, and geometry all get tossed out the window below High.

Low is an excellent example of why this guide is necessary—shadows are jagged, textures are blurry even directly next to the player, and everything appears flat and monochromatic. Ultra is definitely the setting to aim for, and High is an acceptable minimum. Interestingly, Low settings with the i5-6600K still don’t get our FPS as high as the 7700K with High settings; Watch Dogs 2 is properly leveraging multi-threading in a way that we don’t typically see for games. 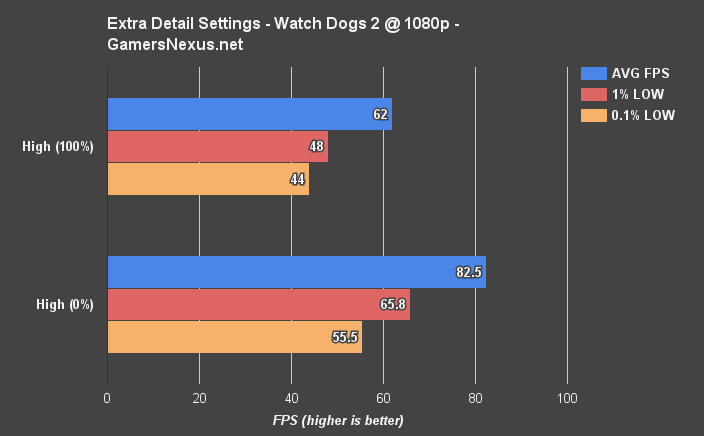 The single greatest performance impact we saw across our tested settings was with “extra detail,” a fact Ubisoft must be well aware of, since it’s completely turned off in every preset graphics profile. At the highest setting, it decreased our framerate by an impressive 24.8%. Extra detail controls the level of geometric detail on all objects, even ones in the distance which would normally be replaced with simple, easy to render shapes. The most visible changes in our screenshots are the distance at which the “BUS” text appears in the center lane and more detailed buildings. Most improvements are barely noticeable at street level, like additional support struts on the solar panels to the left and the cell phone tower in the center. We’d recommend leaving this setting off and relying on the “geometry” setting, which has a similar effect on building facades and draw distances. 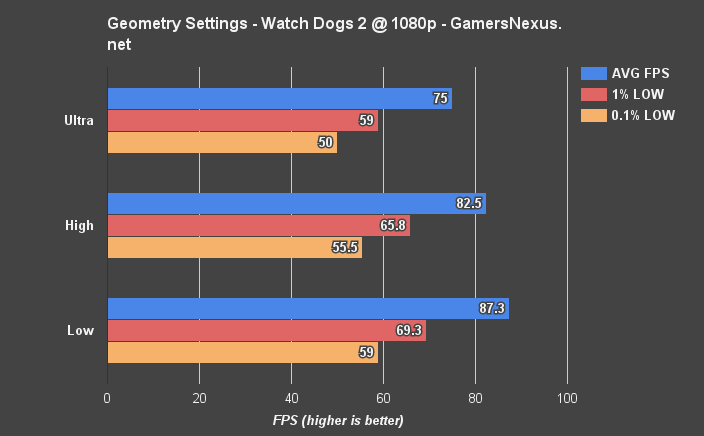 Geometry is set to high in our baseline benchmark, giving us room to turn it down to medium or low. Low offered us a 5.8% increase in performance over baseline (and ultra a 9.1% decrease), making it another CPU-bound setting. The difference between low and ultra geometry is much more visible than the difference between 0 and 100% extra detail. This is because extra detail was disabled while we tested geometry, but geometry was set to high while we tested extra detail. Since the visible effects of both settings are so similar, it’s difficult to separate them, but this much is clear: at 1920x1080, ultra geometry and 100% extra detail appear virtually identical, while extra detail performs far worse.

Geometry and Extra Detail most heavily impact CPU performance as it’s adding draw calls to the pipe, which means the CPU gets involved in processing and handing off each primitive call to the GPU. 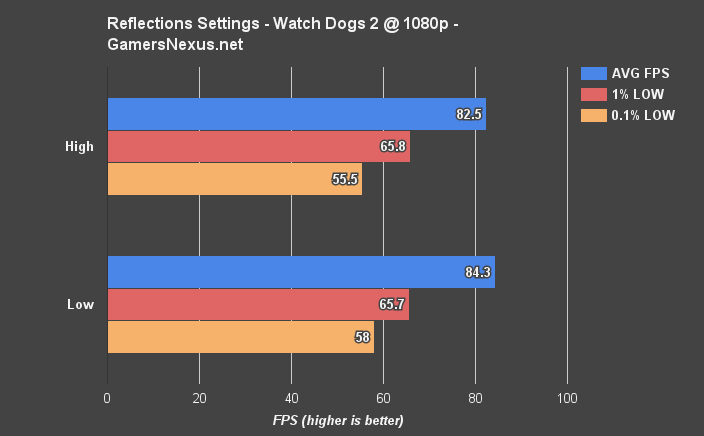 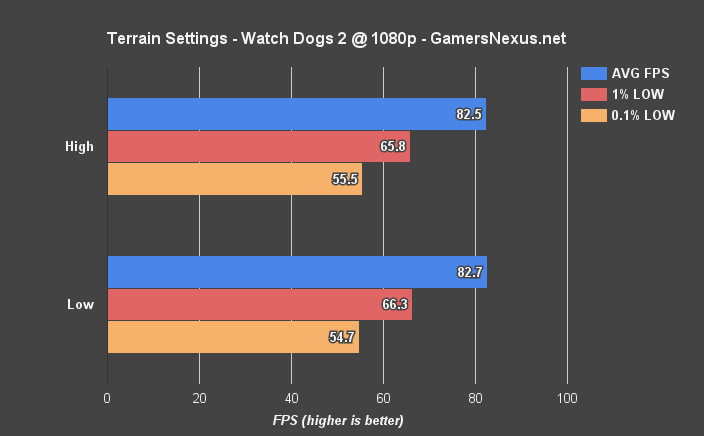 Terrain was initially promising as a CPU-limited setting, but it only controls textures of distant terrain (not geometry). We didn’t notice significant visual changes, and it’s unlikely that this setting will improve performance outside of VRAM consumption. 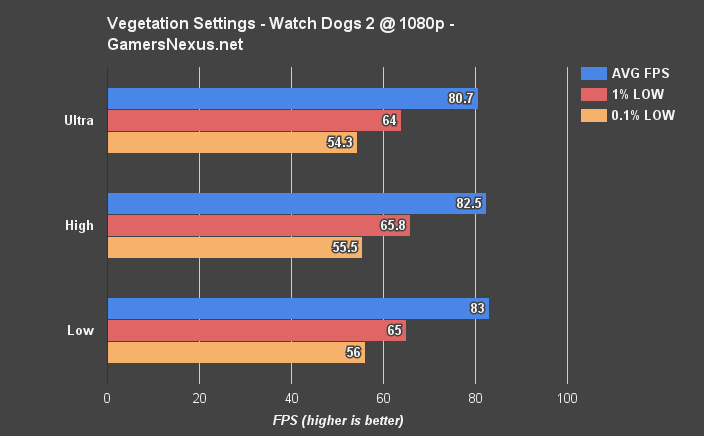 Vegetation controls the render distance of more detailed trees (they’re also affected by the extra detail setting, just to confuse things). It didn’t have any significant impact within the bounds of our benchmark course, which contains a reasonable number of trees, but it did have a visual impact. This setting should be left at least on high unless performance is specifically dropping in forested areas.

For PCs that are being throttled by their CPU performance, geometry is definitely the setting to alter above all others. For such a CPU-intensive game, Watch_Dogs 2 offers an unfortunately limited selection of relevant graphics options. Extra detail should always be kept to the minimum for the present, and geometry should be adjusted as needed.

For users that believe they’re being limited by their GPU instead, check out our GPU benchmark. Both Watch_Dogs 2 and GPU drivers have updated since its publication, but will provide a starting point.