(Oops! I blundered in that second video: They're from Montreal, not France. My fault).

Francois Alain (above) was kind enough to answer questions on progress, multiplayer, release timeframes, stability, and general plans over the course of a 45-minute stay at their booth (a few of these are answered in the video); overall, the team was energetic and excited for the game's great reception at PAX East 2013—their first major US convention as a team—if a bit inexperienced in dealing with the masses and media outlets.

One of the most frequent questions we received from the Castle Story community was pretty simple: When's it coming out? It's a fair question, but at the same time, game development is rarely so predictable -- especially with a team as small as Sauropod's, which is comprised of three core developers and a handful of supporting friends/collaborators.

"I don't want to make anymore promises," Alain answered, "We missed a lot of deadlines early on and I don't want to do that to the community again. It's hard to give dates, because if a big bug is found, there's only a few people who might be able to fix that... so each problem could [delay] our schedule for a pretty long time."

Alain had a very detectable attachment to the community and the game's backers; it was clear that the missed deadlines (some set for November were only recently achieved) weren't a matter to be taken lightly by the team, and were almost a point of shame. I asked if the team had any regrets about releasing a prototype so early, something generally inadvisable as the open public won't understand the implications of being pre-alpha. When I questioned if the initial wave of registration and usability issues had at all detracted from the development of the game or their own ambitions, Alain put it simply:

"I don't really regret it - I think without the prototype, we might not have had the [level of success] we did. It also showed us that -- it showed us we really need to redesign the interface to make it work better for players. It took a lot of time to fix the UI, but we released [the current build] to the beta backers because we thought they waited long enough. I wouldn't really call it a beta... but they deserved something to play."

Francois Alain spoke for a few moments on the subject of community and support, telling us that the response to the new interface had been overwhelmingly positive and that they take the feedback very seriously. It's a small team, as he made clear, and with two of the three core developers working double-duty as designers/programmers, time gets divided between the implementation of new features and resolution of existing bugs. They've also been reworking the game's engine in fundamental ways to better enable Castle Story to reach its full potential - something we'll talk about more below.

Everyone on the team expressed a shared sense of optimism, but they also want to take their time in development to ensure a stable, playable, balanced game is ultimately released. It'll come down to the community for wide-spectrum balance testing, mostly due to sheer numbers, but the team wants to focus on engine scalability and the game's foundation right now.

So in a sort of round-about way of getting the question answered, we weren't given anything concrete. While not stated so directly, it's very much a case of "it'll be done when it's done." They'd love to have something close to finished this year, but any number of methodological and programmatic obstacles could impede that objective, so there's no tentative target at this point.

On Progress Since the Kickstarter Campaign

As noted above, nearly all the major development milestones have been achieved in the form of UI or engine upgrades. The UI changes are instantly visible (already discussed in depth in the above video), but the engine stuff is obviously a bit less apparent to onlookers -- that makes it a bit hard to showcase improvements to the public.

Regardless, one of the topics that the community has expressed great interest in is that of multiplayer: Will it exist? Co-op or competitive? Persistent or match-based? These were all questions we asked Alain.

First of all: Yes, there will be multiplayer. We were told that it'd likely come initially in the form of cooperative play with the primary intention of playing with friends (anti-cheat protocols are near the bottom of the to-do list), but competitive play would be added later. The team already has multiplayer roughly functional, too: Bricktrons are somewhat synchronous across systems -- they don't do much, but they synchronize, so it's promising.

When asked if the world would be persistent or not, the answer sounded like that's something they'd like to do, but not initially; it's still too early in development to really get a firm grip on that sort of question, but the team's thoughts were generally indicative of a desire to enable server-side persistence at some point. For now, though, match-based competitive multiplayer was the most immediate item after some form of cooperative play.

In the form of a StarCraft match (logistically - not strategically, of course), it sounds as if Castle Story players would launch competitive one-on-one or team matches in an instanced, non-persistent battle. The most immediate concern would lie with the pacing of the game -- Castle Story isn't fast, and it's meant to be that way, so creating a competitive multiplayer experience that's true to the spirit of singleplayer seems non-trivial.

"It's not easy to plan for, we need to test it. We don't want people to play 3 hours for a multiplayer match just to get their base built, they'd probably end up just hitting each other with the [starting] Bricktrons," Alain joked. 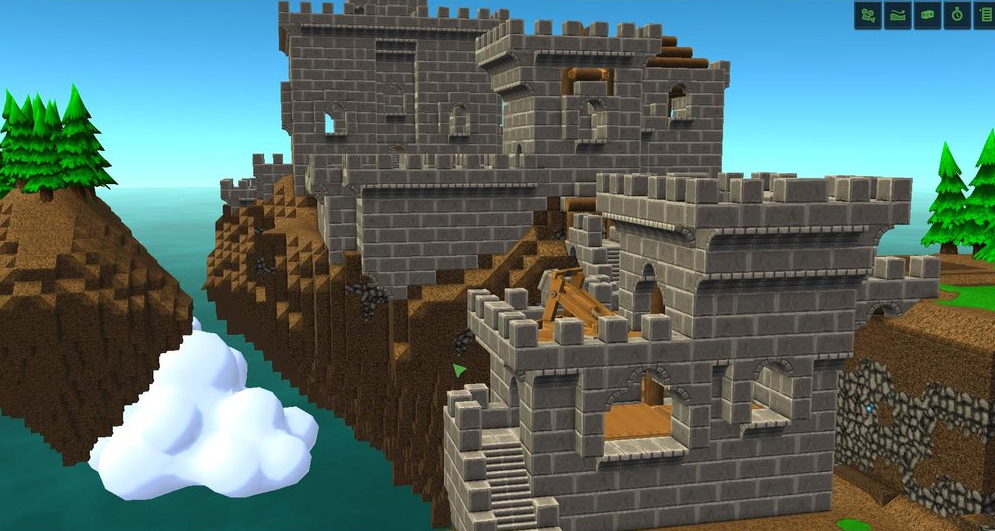 We weren't able to glean much information about how Sauropod intends to tackle the issue of player-versus-player matches, but the "cooperative mode" sounds as if it'll work in a similar fashion to a non-persistent version of Minecraft: Build stuff with your friend on an island simply for the sake of building stuff. It was unclear whether a saved game could be loaded—we'd certainly hope so—but as it stands now, this is all pretty far in the future.

As with Star Citizen, networking is a big concern in Castle Story (though for very different reasons). Networking and server infrastructure aren't easy subjects of computer science, and RTS games are notoriously touchy when it comes to latency and precise response times. The devs have looked into P2P networking and server-side options, but haven't yet come to a conclusive decision on how multiplayer matches will be technologically juggled.

Again, we don't have anything firm on new features (or really much of anything) at this stage, but the team would ideally like to add "biomes" for different islands -- desert islands, snow islands, and so forth -- along with more unique materials (marble, metals). They'd like to facilitate building cool structures in any way possible, but aren't quite sure how at this time. Reforestation and renewable resources have also been a frequent question, but the answer to that was equally uncertain or tight-lipped.

Procedural generation of these islands is another programming issue: The nature of the camera angle means you can view upwards of 5km in the distance at any given time, and it'd be a huge strain on system resources / the engine to generate that much terrain actively. The team's going to have to determine a way to either create a cut-off point for island generation (i.e. you can see farther than what is physically rendered -- so you'd see big, empty skies in the distance) or play other back-end illusion tricks. They didn't seem concerned, but did want to give us a bit of insight to the types of hurdles the team faces.

As I've said a couple of times now, nothing is really certain. The team's been working on UI and engine improvements for a few months now and is starting to play around with multiplayer conceptualization, but is really quite a ways off from any earth-shattering announcements. It's easy to forget that the funded version of the game has only been in development for a little under a year now, which is still infantile in terms of game development; they're a new studio with a small team and a big idea, so it's just going to take some time to get everything right.

The new user interface is a fantastic improvement over what we're used to from the prototype build, too: It's intuitive, pretty, and functional. That's definitely a step in the right direction. Just remember - a lot of the items the programmers are developing at the moment are a part of a deeper, unseen framework; just because we're not getting screenshots of huge island paradises doesn't mean the team has stopped working, it means they're working on other, less visual elements of the product.

I felt inspired by the overall attitude and optimism, but was also relieved to hear the realism that resounded in Alain's voice. We talk to a lot of organizations at these events, so it's not uncommon to get the standard "everything's perfect!" pitch from PR managers and walk away feeling empty, but Sauropod knows the challenges they face, they know they've got a big idea, and most importantly, they know the community values quality above speed. They're friendly and competent -- certainly a good framework for any new studio -- so we'll just have to see how the stars (or floating islands) align.