This content piece started with Buildzoid’s suggestion for us to install a custom VBIOS on our RX 570 for timing tuning tests. Our card proved temperamental with the custom VBIOS, so we ended up instead – for now – testing AMD’s built-in timing level options in the drivers. AMD’s GPU drivers have a drop-down option featuring “automatic,” “timing level 1,” and “timing level 2” settings for Radeon cards, all of which lack any formal definition within the drivers. We ran an RX 570 and a Vega 56 card through most of our tests with these timings options, using dozens of test passes across the 3DMark suite (for each line item) to minimize the error margins and help narrow-in the range of statistically significant results. We also ran “real” gaming workloads in addition to these 3DMark passes.

Were we to step it up, the next goal would be to use third-party tools to manually tune the memory timings, whether GDDR5 or HBM2, or custom VBIOSes on cards that are more stable. For now, we’ll focus on AMD’s built-in options.

After running dozens of tests, we’ve found Firestrike to have a standard deviation of about 0.22FPS for GFX 1 and 0.06FPS for GFX 2. 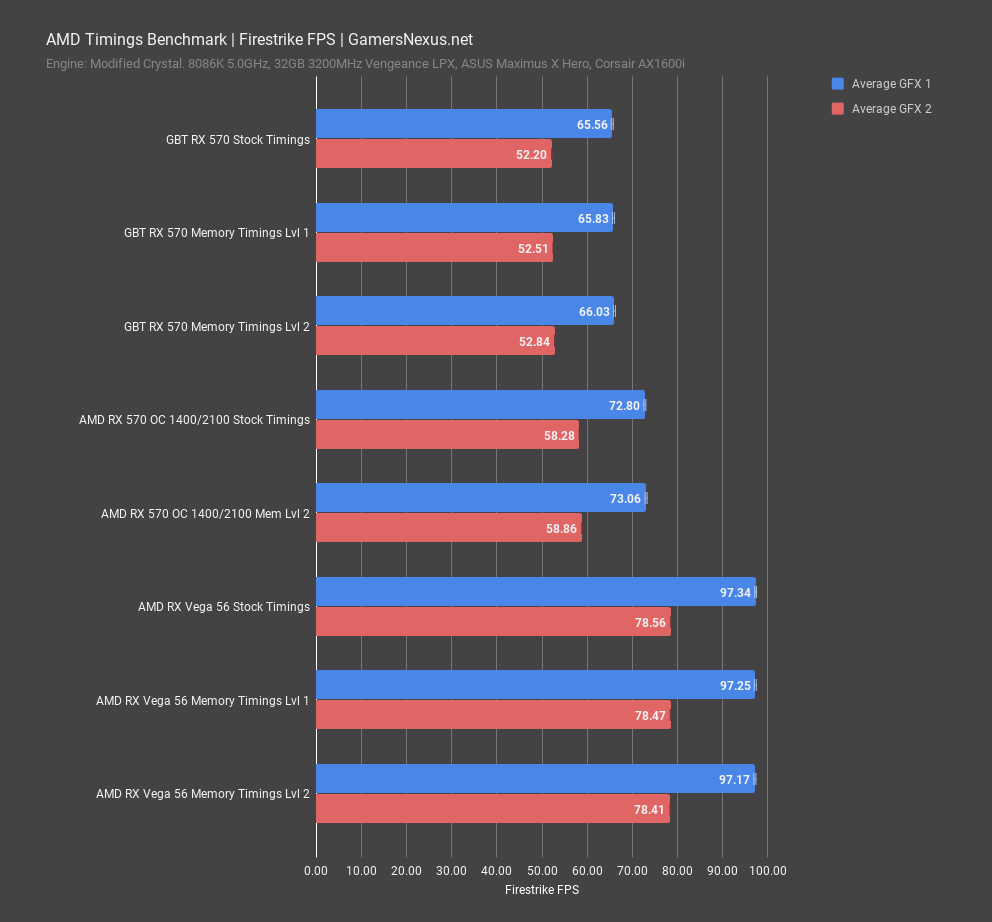 For the Gigabyte RX 570 with stock timings, we measured GFX 1 at 65.56 FPS AVG across more than 10 test passes, with GFX 2 at 52.20. GFX 2 will be the more accurate of the two numbers and should also be more sensitive to memory changes. Memory timings level 1 puts GFX 1 at 65.83FPS AVG, a difference of +0.27FPS. Considering standard deviation is 0.22FPS for this test, this is not a meaningful difference. The The result of 66.03 follows the upward trend begun by timings level 1 and does exit deviation against stock even at the extremes, but only barely. We still can’t confidently state if the difference is statistically significant, but it does appear to have an uptick in performance. Even if it does perform better than stock, though, the gains are irrelevant in this workload. GFX 2 shows more meaningful gains if looked at from the perspective of error, but they are still meaningless to the user. These differences would be undetectable to a human. Even overclocked and with a memory overclock, the difference between memory timings at stock and level 2 is effectively 0.

Vega 56 showed a range of 0.17 from top-to-bottom of the averaged results in GFX 1, or 0.15FPS for GFX 2. Technically, we see a decline in these results, but they are mostly within error. We cannot state any meaningful difference. 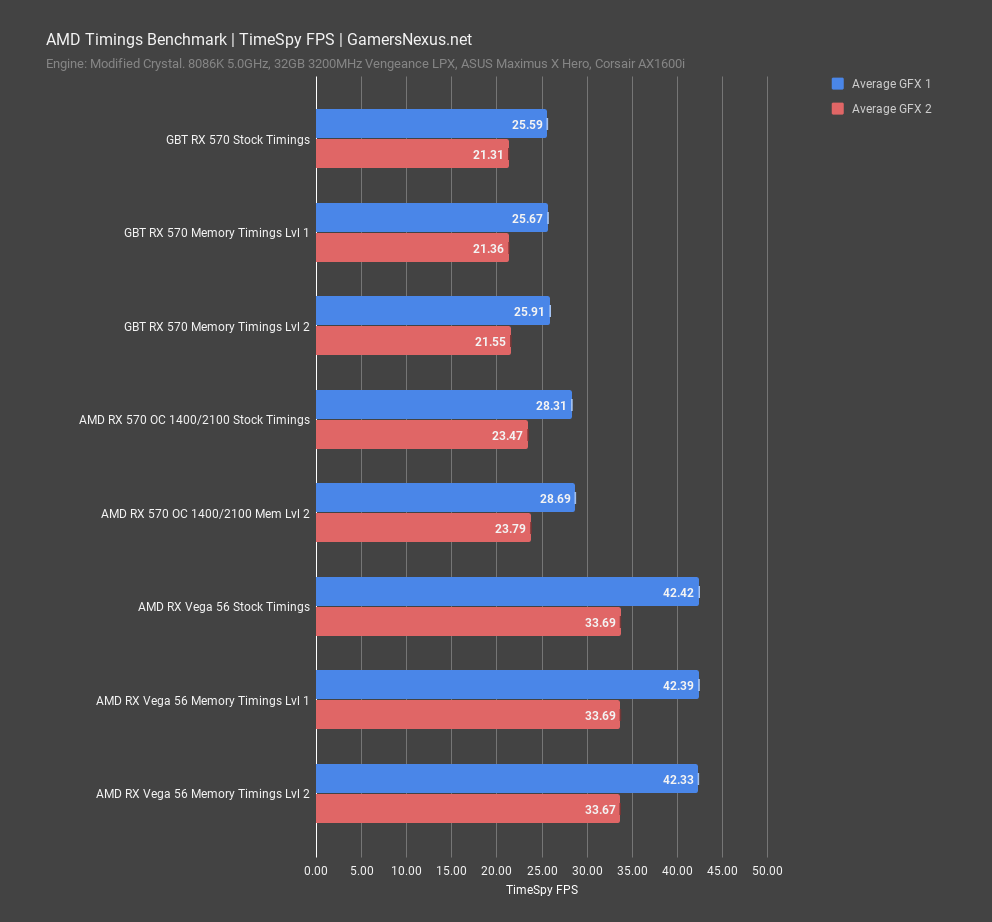 TimeSpy has much closer final results than Firestrike, with a standard deviation of about 0.03FPS for both GFX tests. For this one, the RX 570 stock moves from 25.59FPS GFX 1 to 25.91FPS for memory timings level 2. Although this is a statistically significant change based on our error from Timespy itself, we’re still too close to feel comfortable declaring a meaningful result; remember that, although we know TimeSpy’s variance, computers are complicated and unknown background tasks may cause interference that amounts to such a small difference as this. Either way, under the best case, assuming we’re perfectly accurate, we can declare an increase of 1.25%. GFX 2 shows an increase of 0.24FPS for the RX 570 from stock to timings level 2, a gain of 1.1%, assuming perfectly accurate results. Timing differences with an overclock are also insignificant, although looser timings may allow higher overclocks, assuming we had that level of control.

Vega 56 again plots a downtrend from stock, but like with the RX 570, we don’t have full confidence to declare changes without making some assumption. Assuming again that the numbers are 100% accurate, which is unlikely when talking about such small changes, then the 56 slightly decays in performance with the other timing levels. More realistically, all of these numbers are too close to call. 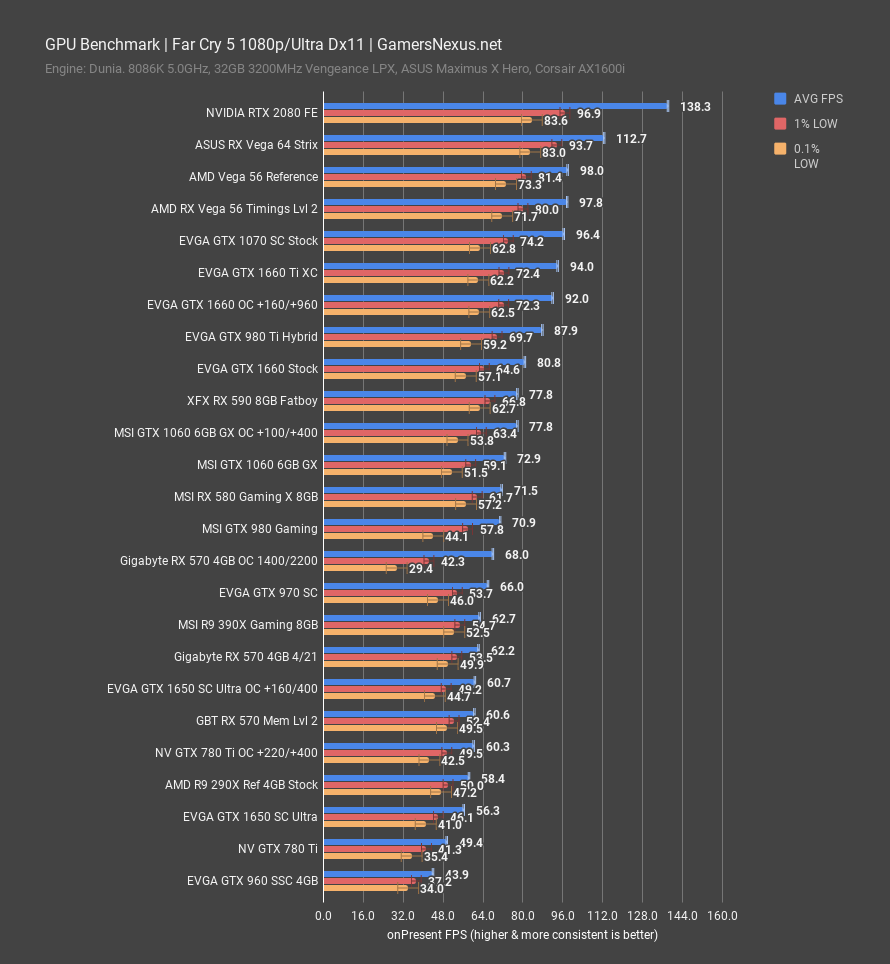 Far Cry 5 at 1080p has the RX 570 4GB stock card at 62FPS AVG, with lows at 54 1% and 50 0.1%. The memory timing level 2 configuration puts us at 60.6FPS AVG, 52FPS 1%, and 50FPS 0.1%. These results were consistent and within 0.5FPS AVG run-to-run. We can’t declare an improvement for memory timing level 2, although we also can’t necessarily confidently state that it diminishes performance. It does look that way here, but we’re close enough to error that we have to settle for calling it unnoticeable, if different at all. Vega 56 ran at 98FPS AVG stock and 97.8FPS AVG with level 2 timings, so we again observed no change. 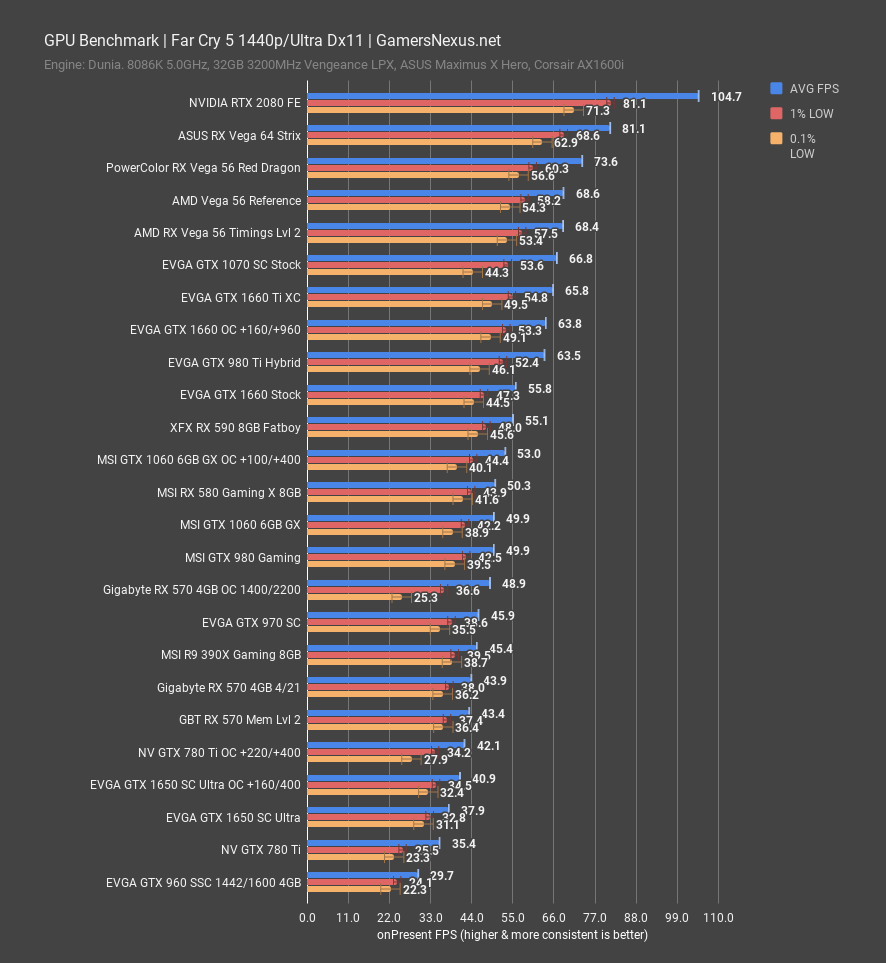 1440p further demonstrates a lack of difference. Our stock results were at 43.9FPS AVG, with memory timing level 2 at 43.4FPS AVG. This is well within error margins. We did see more variable 0.1% low performance here, but it’s hard to know the precise cause of this as the dataset is more limited. The 0.1% low range was wider for the changed memory timings, potentially indicating some instability or memory errors. This is also something we commonly see with memory overclocking when pushing too hard. At 1440p, Vega 56 reference reported 68.6FPS AVG, with the timing level 2 version at 68.4FPS AVG. No difference here. 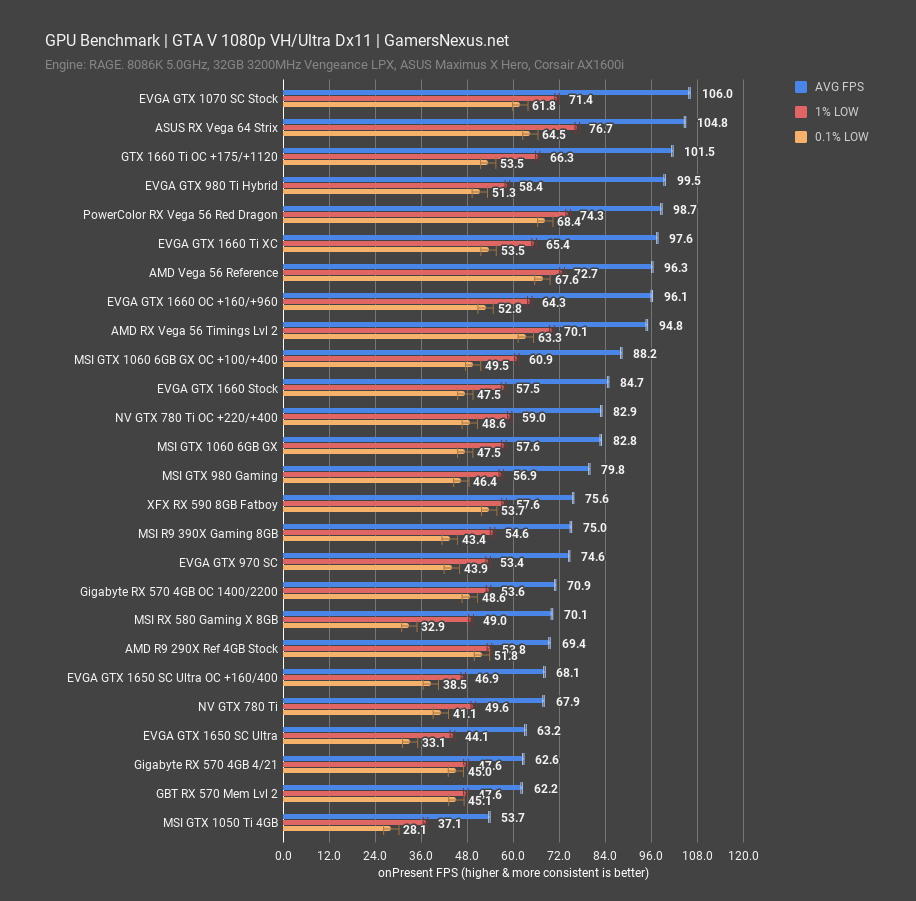 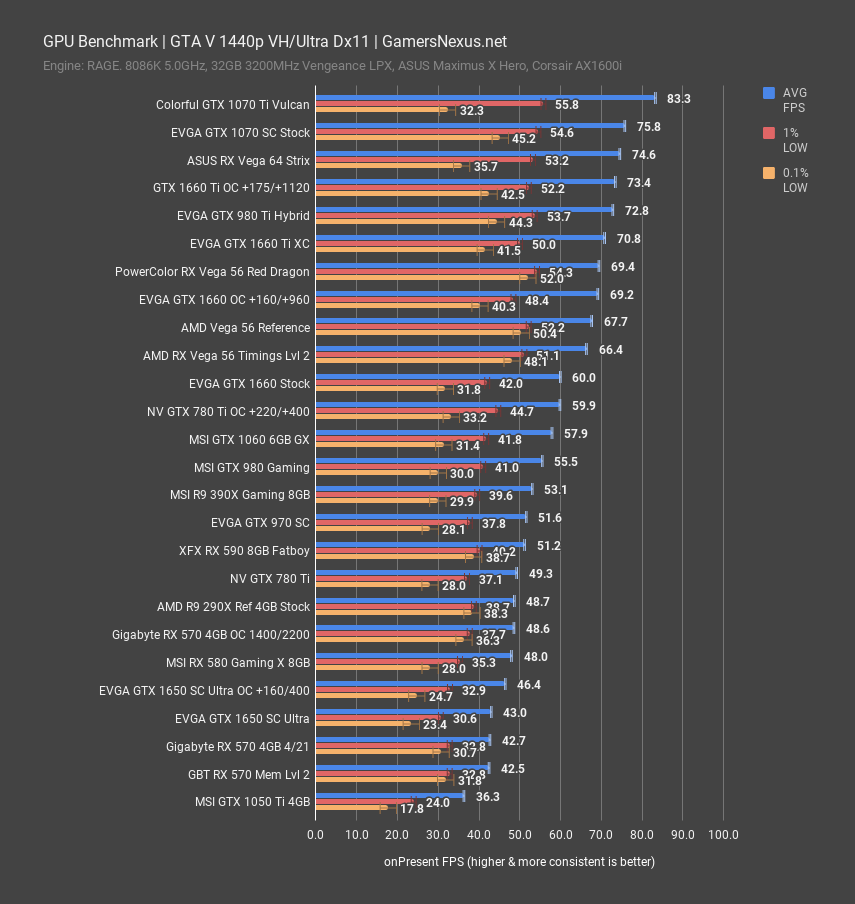 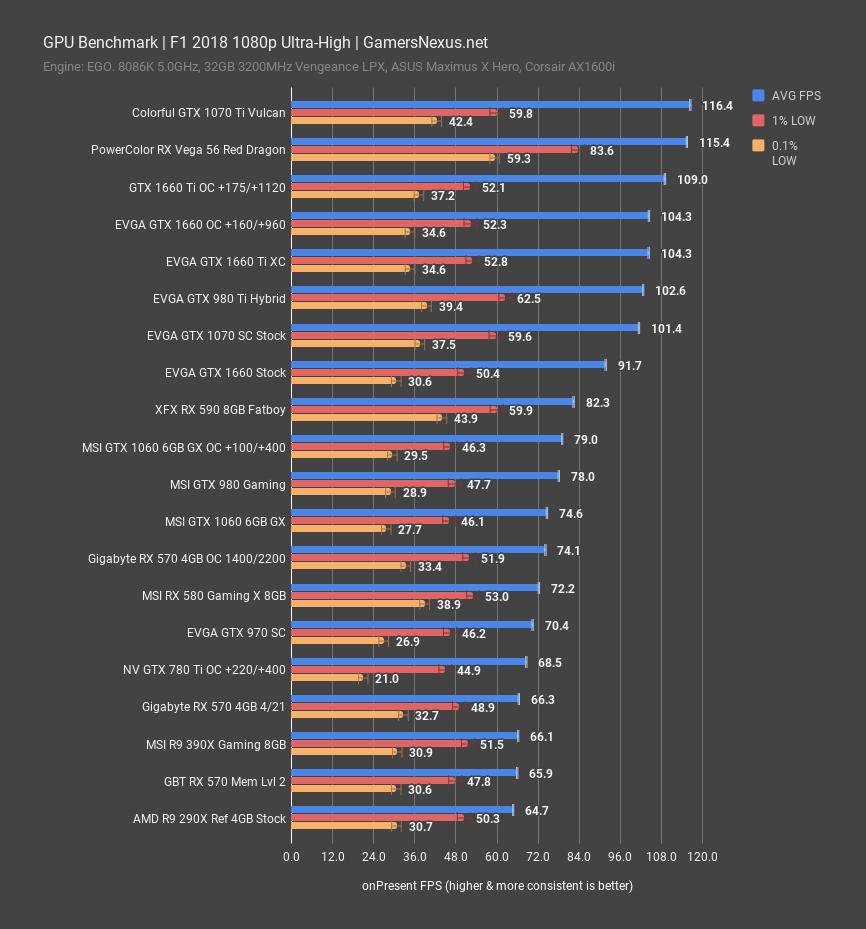 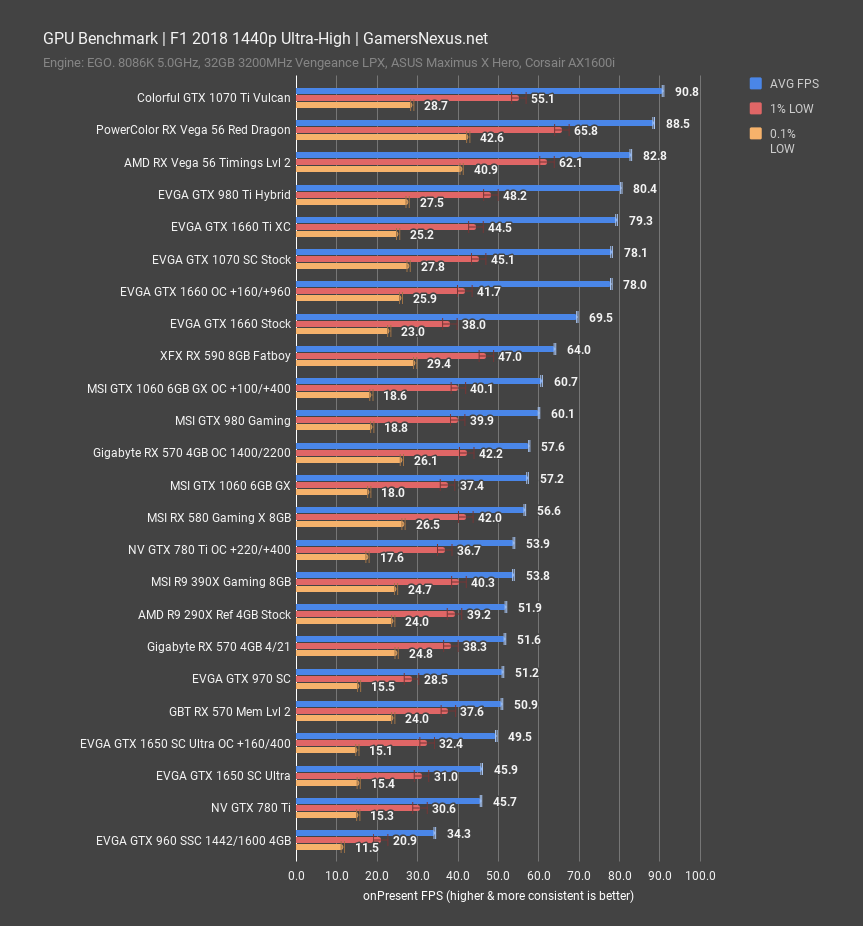 1440p testing had the two cards again identical – 51.6FPS AVG and 50.9FPS AVG, which is within error margins. Lows were unaffected.

Ultimately, we saw minor differences, if there were differences at all. Some of these do start looking like “real” 1% changes, for instance, but it’s so difficult to detect even in software measurement that we can’t state a visible difference to the user. Even invisible differences seen here are unnoteworthy. There would likely be more significant impact in other applications, like cryptocurrency mining, but we just didn’t see anything of note in these games. The next step would be manually tuning timings or installing a custom VBIOS, seeing as AMD’s built-in settings are sort of a black box.