Premise: An Intro to Titanfall

The game takes place in the distant future in a region called 'The Frontier' (creative, we know); humanity has spread into the deepest reaches of space and The Frontier makes up the explored and uncharted territory that exists. There are two warring factions in The Frontier: the Interstellar Manufacturing Company (IMC) and the Militia. The IMC is responsible for the creation of the Titans and is interested in maximizing profits by using all the resources available in The Frontier; the Milita is a part of the Frontier's territorial defense pact. The Milita is fundamentally opposed to the IMC's rapid expansion in The Frontier and has taken action to stop them.

Our ground infantry and Titans are differentiated by their outfit – the IMC has standard-issue, shiny, high-quality Titans and equipment (cleaner textures and models, basically) while the Militia's equipment is scavenged. The DIY Titan route, really.

There is no Campaign mode in Titanfall. Respawn decided it would be a waste of cost and labor to create a single-player mode that most players would either not play or would get through in a short amount of time. They focused on building a game on the Source Engine that is multiplayer only – something the Source Engine excels at (see: Counter-Strike, Team Fortress 2). A storyline does exist within the multiplayer mode, though exactly how the storyline is implemented in the game to be seen.

We do know that hero-like (commander) figures are present on the battlefield, in the HUD, and that missions are assigned to the teams by their pre-scripted AI leaders. Multiplayer matches are split into several segments, generally with the overall concept that the IMC aims to overtake the region for resources.

Each match initiates with a drop from our players (pilots). An objective is assigned (standard game modes, below), and once one team accomplishes the objective, the remaining pilots on the losing team can attempt an escape via dropship; the winning team uses this time to kill all the remaining pilots in similar fashion to what happens in BF2 when the tickets for one team expire. 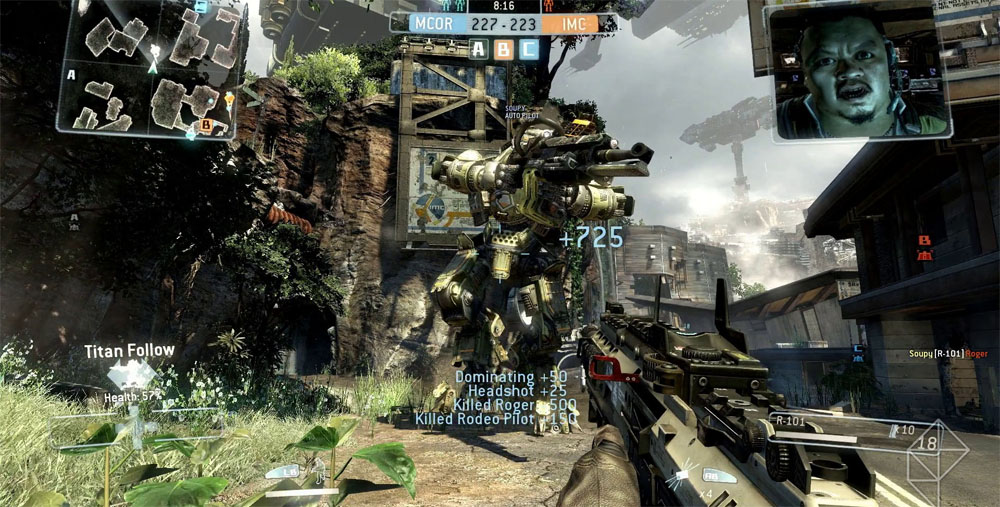 Games are played with 6 PC pilots vs. 6 PC pilots. All pilots have the ability to call in a Titan. Games also feature NPC “minions,” either in the form of Grunts or Spectres. Grunts use similar models and textures to the player pilots and effectively resemble foot infantry; Spectres are bipedal bots (almost 'battle droid'-like) that can be hacked by use of a data knife – this converts them to the hacker's team and sets them to support the hacker in battle until death. Each team has twelve total AI that fight for their team. This makes for matches that are in total 24 v. 24 (48 total 'units' on the battlefield; 12 total human players).

Game modes thus far include Attrition and Hardpoint Domination. If more modes are impending, we don't yet have details on them.

Attrition is the standard-issue Team Deathmatch mode: Teams are tasked only with killing the enemy team. The time limit is 10 minutes and winner is the first team to get 250 kills; kills are accrued by killing PC pilots, Titans, and NPC units.

Hardpoint Domination is an objective-based game mode. In this game mode, there are three different capture points on the map (A, B, C) that must be controlled by the teams; while a team has a point captured, points are earned for the team that count toward the win condition (see: inverse of Battlefield's attrition-based ticket system). If an enemy team already has an area captured, your team must first neutralize the point and then capture it for your own team. Standard Domination. Game length is fifteen minutes. Score to win is 400 points.

Titanfall's level design takes a somewhat unique approach when compared against other modern FPS games. Because of the parkour element—pilots are able to execute Mirror's Edge-like wall-runs, hangs, etc.—our levels are a lot more vertical than in most games. In Call of Duty, Counter-Strike, and even Battlefield (sans aircraft), we're presented with what is effectively a two-dimensional plane with limited Z-axis extrusions. Titanfall's levels feel smaller (X, Y) from what we've seen so far, but make heavy use of heightened buildings, obstacles, and – obviously – titans to add playable vertical space. Because pilots have the best tactical advantage when given height over a Titan (out of the peripheral vision), it's likely that buildings will be used to a greater strategic extent than in most other FPS games. This is amplified by specific gameplay elements (described below), like the ability to effectively hijack and destroy a Titan from the outside.

Who Are the Pilots?

Pilots are the player-controlled characters in Titanfall, the difference between them and grunts being that pilots are specially-trained to use the Titans (mechs) in combat. Pilots have the ability to fight outside of their Titan and have heightened athletic abilities to sprint, jump, wall-run, wall-hang, and jetpack around.

Pilot Loadouts (detailed below) include: a Primary Weapon, an Anti-Titan Weapon, a traditional side arm, a Tactical Ability, an Ordnance, and a Kit (pick two). When a Pilot is inside of their Titan, their loadout (input set) is overridden by the Titan's.

There are three different Titans a player can choose from: the Atlas, the Ogre, and the Stryder.

The Atlas is the default Titan model and is the most balanced in armor, mobility, and firepower. The Ogre is built to take heavy damage. It has a 30% increase in rigidity compared to the Atlas due to its increase in armor; the Ogre features a finishing move where it rips the arm off an enemy Titan and proceeds to pummel the opposition into rage-filled death (“stop hitting yourself!”). The Stryder is the most agile of the Titans. It has a 30% increased thruster capacity (speed) and the lightest core, allowing greater mobility. It has a 23% decrease in armor from the Atlas to give it that increased speed. The Stryder can out-maneuver most Titans, but can be taken down easily by multiple hostiles.

Titan Loadouts have a Weapon, a Tactical Ability, an Ordnance, and a Kit (pick two). Titans also have a core ability. This is an ability that is special to each Titan and must be earned through persistent leveling and profile building. The Atlas, for instance, has a 'Damage Core' ability. The Damage Core ability deals more damage for a certain period of time, then hits a standard cool-down.

It takes four minutes to build a Titan from the start of the match. After this four-minute mark, a player can call in their Titan (the timer persists through death). Players can choose to get inside their Titan and fight or put it in Follow mode or Guard mode. In Follow mode, a Titan will follow a player around the map and attack any enemies that come within its firing range. In Guard mode, a Titan is left to defend its ground, potentially useful for giving warning to the guarded player when doing recon or sniping. Pilots can choose to hitch a ride on their own Titan, a friend's Titan, or get on an enemy Titan and attack it. While Piloting an assaulted Titan, you're alerted to eject and remove the attacker. Once your Titan is destroyed, it takes two minutes for another Titan to be built and deployed.