In this hands-on preview of Grey Goo, we look at the return of the original RTS, discuss core gameplay mechanics, and elaborate on why we think Grey Goo has potential to be huge within the strategy scene.

What Is Grey Goo?

Grey Goo is a real-time strategy game based in a distant system within the Milky Way galaxy. Grey Goo is more similar in gameplay elements to Command & Conquer than StarCraft, focusing on base-building, strategic use of hard- and soft-counter military units, and resource management. The GreyBox team hopes to focus most heavily on tactical play and meta strategy without emphasizing micro and APM counting. We have no doubt that higher APM (actions per minute) will benefit players at a higher level of play, but at its core, tactics will win out when players are mostly equal.

“At the heart of Grey Goo lie three unique factions whose functionality and strategies vary significantly from one another. Whether it's the adaptive Beta, the impervious humans, or the unpredictable Goo, players are sure to find the play style they're looking for. Don't get too comfortable though. Skill with your preferred faction is no replacement for truly understanding your enemy.”

Here's that video interview we did, in case you're curious to learn more:

For those who've been following us for the last six years, you may remember that we went through some pretty extensive eSports coverage phases (and even held the slogan “gg, no re” for a number of years). Joined by GN eSports Analyst Keegan Gallick, we set forth to playing a quick 1v1 match in the Grey Goo booth at PAX Prime 2014. Rarely do the two of us like a game – decades of games and a couple thousand titles under our collective belt and it's just not something that happens. There's always some senile, games-were-better-in-my-day complaint. In case you need proof of our gamer senility, here's our joint analysis we shot from the PAX hotel room after 3 days of walking the show floor. We talk about mechanics and first impressions from our Grey Goo experience, an overall positive session with the occasional grumbling one would expect post-PAX:

We both rolled “random” during race selection, resulting in each of us playing as the “Beta.” There are three races in Grey Goo: The humans (more turtle-friendly), the Beta (mid-range), and the Goo (more rushing-friendly). Various styles can be combined with each race, so you're not forced into a style of play based upon race – they're mostly just suggestions at lower level play. The above also contains gameplay footage.

From our Beta-only understanding of the yet unfinished title, mechanics immediately threw a wrench into what we're used to from a modern RTS. It took a moment to re-adapt to the days of C&C and Red Alert, but it was a welcomed adaptation once solidified. I opened with more of a StarCraft approach, constantly (and unnecessarily) clicking on my Nexus-equivalent structure to build structures and units. Once I'd realized that every necessary button is accessible through the fixed, unchanging interface (and further, by hotkey), I instantly fell into a temporal rift that brought me back to the simpler times of RTS. The interface allows for easy macro while managing battles elsewhere on-screen, giving way to highly active (and reactive) meta-game play and quick alteration of tactics. 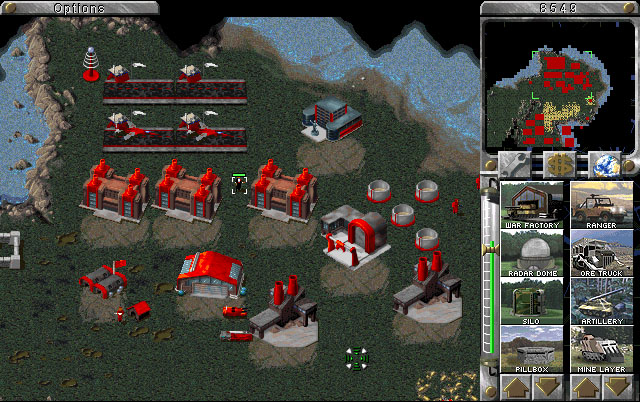 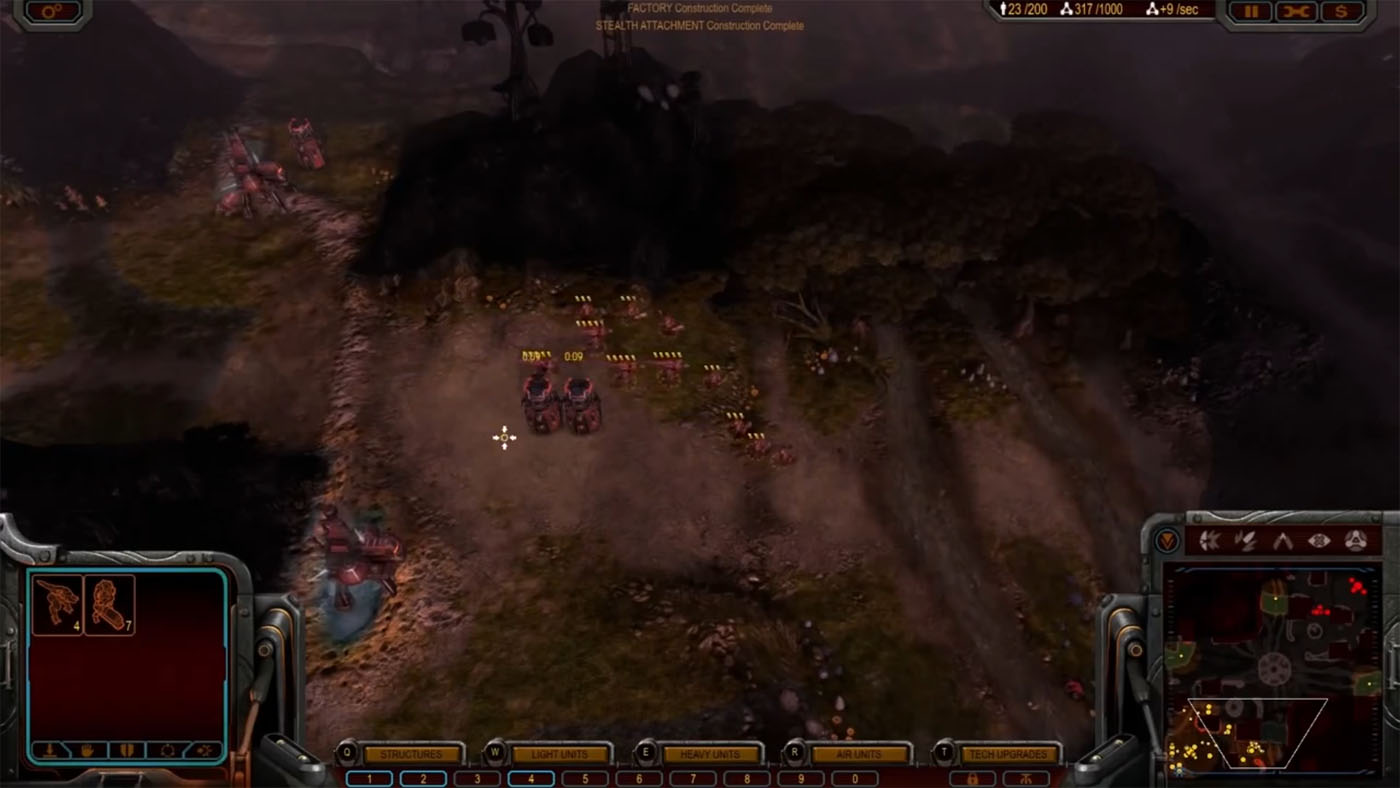 Grey Goo interface. Everything can be accessed through the bottom tabs.

The Beta playstyle mandates that hubs be expanded strategically. The humans and beta are both somewhat limited in their expansion: Humans must build upon structures in an outward, sprawling fashion (similar to how we build cities in the real world) and the Beta must land hubs from orbit, then expand upon them locally. The Beta can be thought of as similar to the Protoss in this manner – destroying a hub results in the deactivation of all attached structures. Further, all tech tree unit upgrades are available specifically to the hub to which the upgrade buildings are attached.

By way of example, a four-building hub might have a factory attached to it; this leaves three more slots available for buildings on that specific hub. The factory can produce all manner of ground units, but each type (tanks, heavy units, things like that) must be unlocked by attaching additional structure to the hub. Say we want to produce heavy units, so we attach something akin to StarCraft's “Armory” to the hub; those upgrades will only be available to the local buildings and won't be available to other hubs controlled by the same player. This forces careful planning of tech advancement and unit production.

The Goo are a more free-roaming, rolling, amorphous mass of protoplasm that can expand with more freedom (though is lacking elsewhere). 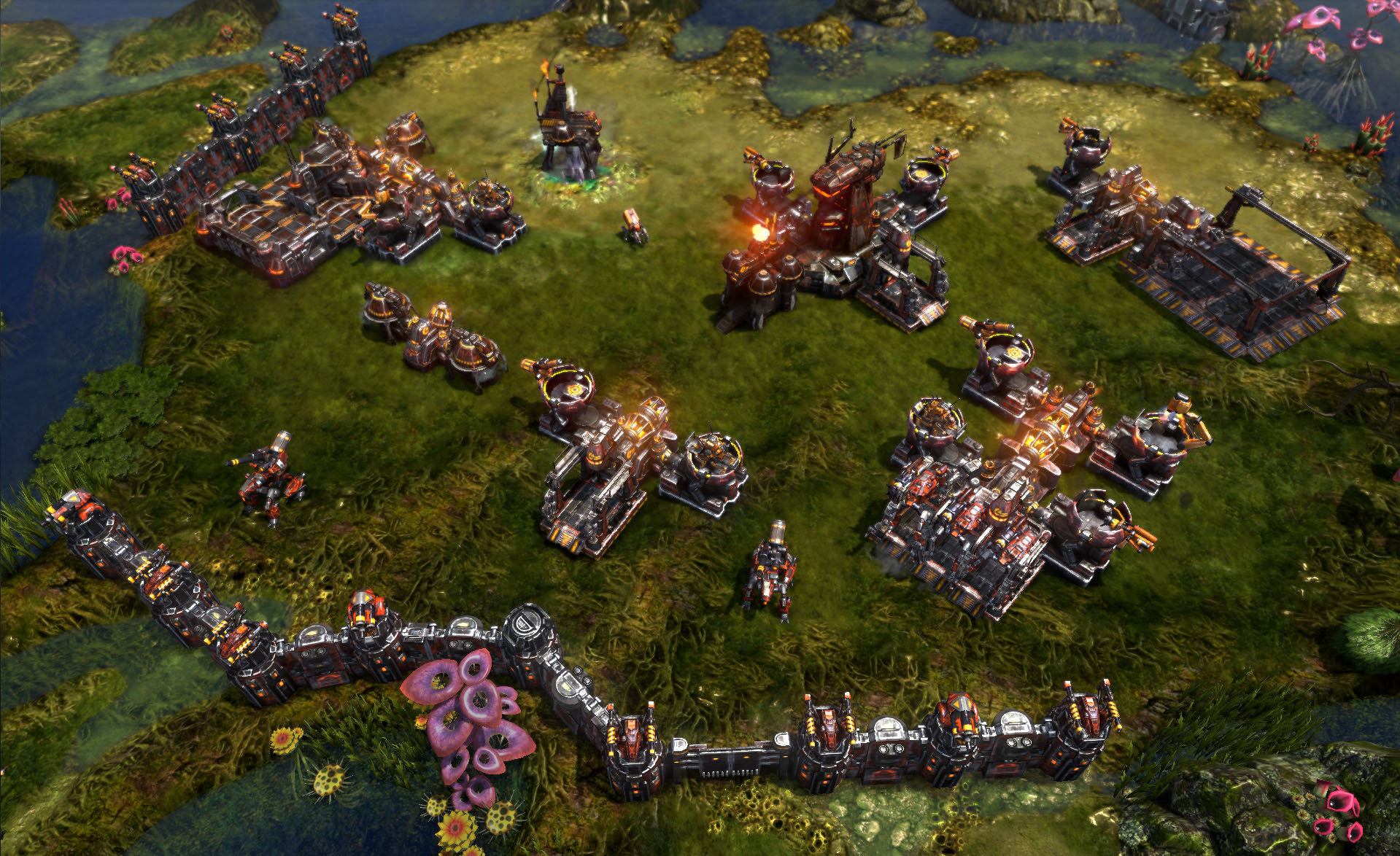 Gameplay starts in a familiar fashion: Scouting, harassment, and act/react tech tree exploration. There's the usual careful RTS dance between players, each trying to determine whether it'd be wise to force a head-on engagement. Flanking, harass, and scouting tactics are very directly rewarded if macro is upkept during these endeavors; this is furthered with the usual map-based elements, including LOS (line of sight) concealing trees and high-ground advantage. Map control and visibility are critical to success.

The pacing of the game feels about right – it took two complete, utter, hopeless idiots (that'd be us) about 15 to 20 minutes to complete their first match ever. Much of that time was spent trying to learn tech and re-learn a favorable interface, so we'd imagine matches would likely fall within the 8 to 25 minute range for most players (depending on how viable rushing is). Gameplay encourages planning ahead and fairly active play, but doesn't demand 200 APM for competition, from what we're told.

I could see Grey Goo becoming a competitive title with a potential for eSports inclusion, somewhat similar to what we saw in C&C Generals, though the game is truly targeted for “beer and pretzels” play with friends.

Hard-counters and soft-counters make unit composition a fun aspect to learn. It's possible to use tactical field advantage, positioning, and a smaller army to take-down a larger army, ensuring a strong feeling that there's generally potential to rebound in a match. From our brief hands-on with the game, it's reasonable to suspect that Grey Goo will be more structure-focused around a central base than StarCraft (which is very expansion-heavy), though we need more time to confirm that theory. Harassment of outlying structures makes “drop play” a powerful tactic, as taking out a key tech structure can inhibit the opponent for long periods of time (some structures take ~30 seconds to build, which is eternity in an RTS).

We noticed that walls had a fairly major focus in all the gameplay videos. I asked Pannullo the obvious-to-a-vet question: No one uses walls. Speaking as a competitive RTS veteran, we never used walls – it was always better to be fluid in response to harassment (better unit composition) or ideally remain on the offensive. Are walls any good in this game?

“Yes,” Pannullo told me, “walls are actually really useful. The humans have these one-way invisible walls – sort of like a one-way mirror – that gives them line-of-sight out, but no one else can see in.” Pannullo pointed out a few choke points on the map, indicating that walls can serve to either buy time or funnel an opponent into a more favorable position on the map. 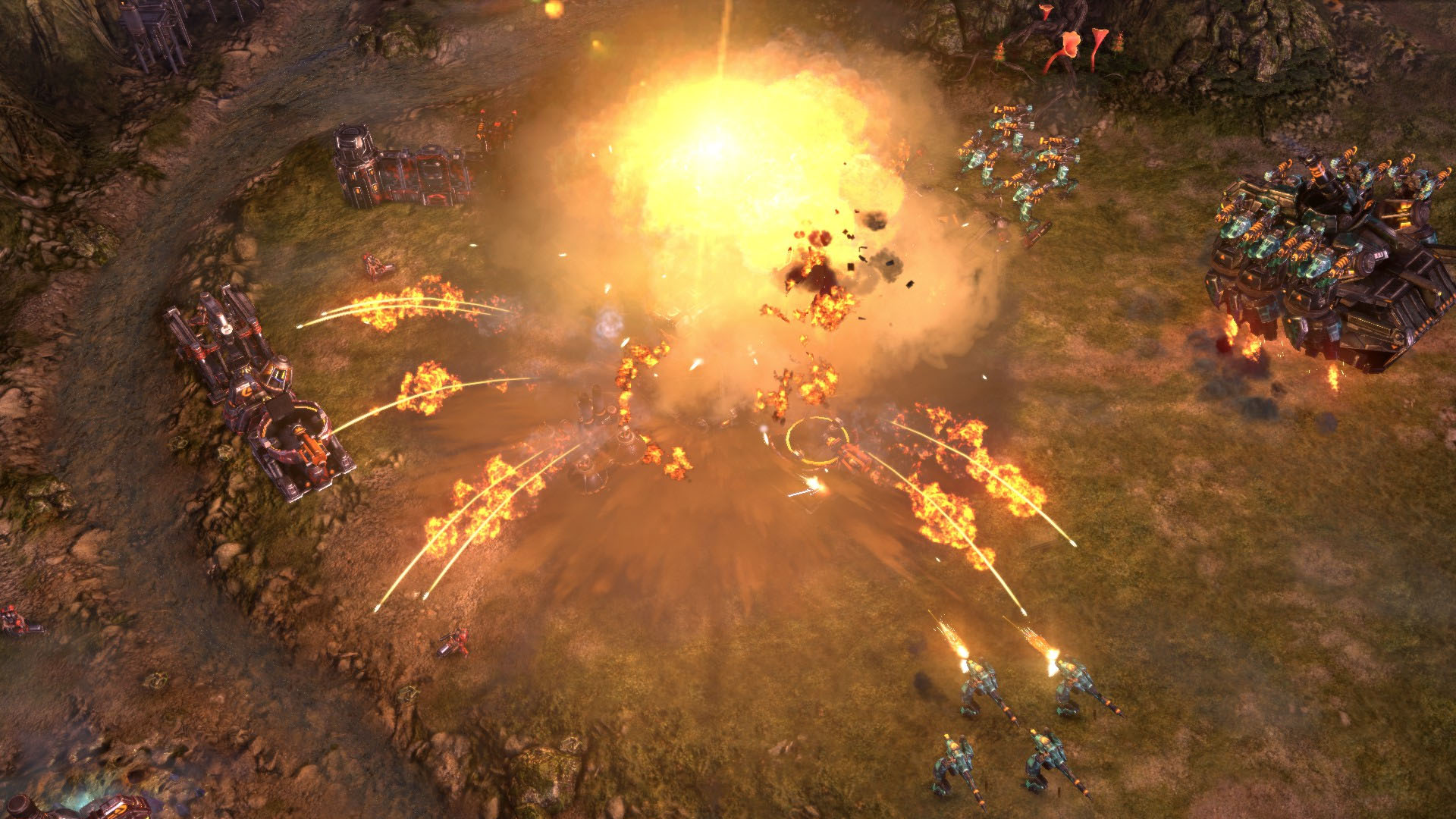 Real-Time Strategy is one of the most solidified genres in gaming. There were dozens of strategy titles in the 90s that paved the way for a strong strategy genre in modern gaming (with MOBAs having stemmed from the likes of Warcraft and StarCraft). Aside from the behemoth that is StarCraft – which has a very targeted appeal – there haven't been many mechanically-sound, barebones RTS games in recent years. Everything's gone to MOBAs, a genre that doesn't feel particularly fulfilling for the grander strategists, and we've been missing the likes of C&C since Westwood's untimely purchase and destruction by EA.