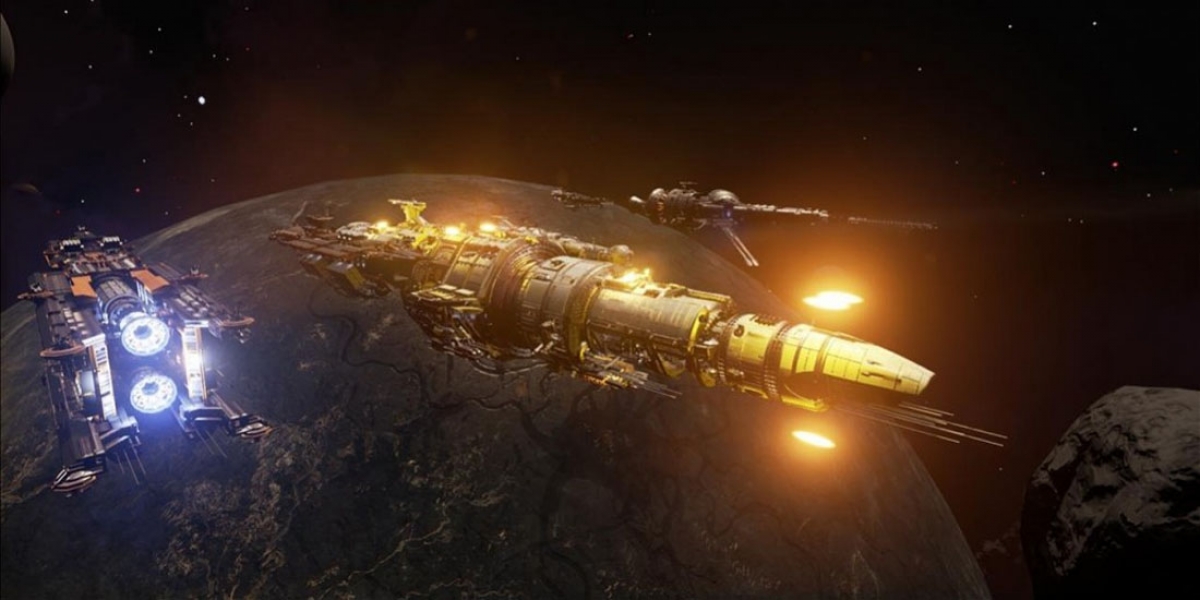 Multiplayer titles have become so complex and content-packed that gamers can no longer expect a perfect multiplayer without intensive user testing, alphas & betas, patches, and downloadable content. Perhaps that’s one reason why many multiplayer-only titles have gone free-to-play: they’re always a work in progress, no matter how enjoyable they are at a given point. British studio Edge Case Games is coming off its space combat game, Strike Suit Zero, and is now venturing into 5v5 multiplayer with Fractured Space. Players take control of one of several ship classes and work together to secure resources and ultimately destroy the opponents’ base.

Fractured Space has been in Early Access since November and will enter free-to-play beta later this year. Until then, Brooksby and his team are placing a high value on community feedback – such value, in fact, that they call Fractured Space an “open development” project. The goal is for Fractured Space to offer a community-enhanced core experience when it goes into beta.

I sat down with Brooksby at this year’s Game Developers Conference and talked to him about how his team functions in an ongoing development cycle, asking how the team evaluates community feedback to make changes & improvements.

Gamers Nexus: How did you end up making Fractured Space an “Open Development” project?

James Brooksby: During September, we decided to truly adopt open development and say we’re pretty sure this is the new way all indies should be [...] We initially invited some of our Strike Suit players in to play the game early on, and then once they sort of got to grips with it, we pretty much told everybody what we’re doing. We put all the features up on our website […] everybody can see what’s going to happen with the game. We do Twitch streams and dev speaks; all week, we have an activity going on.

The capital ships that we had in [Strike Suit Zero] – we could see how they would be fun to play in their own right [...] so we made those enjoyable, I think it was a vision at that stage. One of the biggest differences of Strike Suit Zero into [Fractured Space] is a feature that’s going to come at the end of this month -- all the Fighter vs. Fighter technology. It’s almost like you’re seeing what was in Strike Suit Zero as a Fighter but from this perspective.

Strike Suit basically honed the team. Its biggest influence is that I’ve had a team that I’ve pulled together through various studios [and] kept that core together. They made Strike Suit for 18 months, and then came out the back of it instantly into this project with a huge amount of knowledge – yeah, with a love of sci-fi and a real passion for making something that’s even better.

GN: How did your studio adapt from the development-to-disc process to the 24/7 development cycle?

JB: A big thing for the team was they were just so used to -- and me too -- finishing something [as a full game release]. When we were doing disc-based console games, it’s got to be almost perfect on a disc because you’ve got no other chance. We had members on the team coming to us in November, you know, for quiet chats in the kitchen, going, ‘Just please, can we not do this? This is not finished, my work’s not finished.’ We were being brave for them because we were pretty scared, too, and saying, ‘It will be fine. Just believe us, this is the new way.’ But actually, they love it now. They really do love it because it means that they’re now developing a game that people already like.

Before, you didn’t know. You developed something for 18 months. Yes, you might have finished it, but you don’t know what people are going to think. But now, there’s a bunch of people who really enjoy the game. We talk to them every day. It’s almost like there’s an invisible person that sat next to everybody’s desk that [the team] can engage with about their game, talk about, and change things, nerf things, put new features in. They actually really enjoy it.

GN: How do you work in the community feedback?

JB: You may be thinking at the moment we have some kind of rigid process or whatever, but actually, it’s incredibly fluid. So what we’ve basically got is an enormous whiteboard covered in post-it notes. All of those are all the ideas for the game. We don’t sit there and say, ‘This is the next year of the game.’ We just say these are all the things we want to do. And actually, what people do is, if they’ve heard something on TeamSpeak (or see something on the forum), we fill in a post-it note and stick it on the board. Every time we’re planning the next three weeks’ work, everything’s [on the board]. We’ve absorbed the community feedback.

We all sit in a group. The five various leads and the managers sit there, and we go, ‘Okay what should we concentrate on this month?’ and then start pulling things into the month. And then there’s a process, which is ‘Can we do this this month.’ And some things go back because we can’t do it all, and that’s it. It is a process, I suppose, but it isn’t rigid. We just generally feel what should be coming next. So, for example, the fighters and the carriers are something we had quite far down the line, but almost straight away all the community went, ‘I can’t wait for you to do carriers.’ Everybody’s thinking Battlestar Galactica.

GN: What’s it like for your team to continue improving something that’s significantly driven by your community?

JB:I’m amazed how fast the team have gotten through things because they have probably more enthusiasm than I’ve seen [working] on another game. That’s not to criticize the old games. I think it’s actually because they’re working on something that’s alive with the community. It’s just a different feeling.

People are coming in in the morning not going, ‘Well, I’ve got to work on this today. I still don’t know what people think of the game idea at all.’ And the thing we get posted so much is ‘This game’s got huge potential.’ And that potential is what gets people up in the morning.

GN: What’s the chance you can implement more game modes and maps in time for the beta?

JB: Game modes and new maps are some of the bigger, bigger pieces. One thing we’ve seen on some other games when they come out, they’ve gone, ‘You know what, we could make seven or eight game modes really easily’ because […] game modes can be pretty easy to make. But that doesn’t mean that’s the right thing to do.

GN: What are the chances a game like Fractured Space could become an eSport?

JB: ESports is an interesting [topic] because we were strongly advised by a great advisor to the company who’s done a lot with multiplayer games in this sort of space. He worked heavily with the Koreans back in the late 90s into the 2000s, and his advice has been, ‘Don’t do anything in the game that means it can’t be an eSport – like by making something like a massively pay-to-win model. But you can’t make a game an eSport. The community needs to decide if something’s an eSport themselves. And that’s the kind of philosophy we’re going for. So what’s been encouraging about that […] is actually the community we have at the moment; they are already self-organizing into tournaments and things like that, which is cool, because that’s what we wanted.

I think there was a [recent] game that spent a lot of money courting eSports players for them to go out and tell everybody that this is an eSport. But actually, it doesn’t really work that way. Players decide whether it feels like a game that they can play competitively at a certain time, with the right mechanics. So we’ve been very cautious about it, [but] excited. The main thing is for us to not break the game so that it couldn’t be [an eSport].

At this point, it’s clear that Edge Case Games will continue to work on enriching the game’s core experience with their active community heading into beta. Brooksby went over about a dozen features and improvements planned for the year, some of which include: incorporation of Fighters and Carriers, an ammunition-based defense system, ship ramming, side missions & objectives similar to MOBAs, PVE mode, specific hit locations on the ships, new lighting to vary the different areas on the maps, and spectator cameras. And during this time, Fractured Space’s community will likely offer a plethora of other ideas & improvements.

“There’s a huge wall of post-it notes to do.”

We’ll have continued coverage of Fractured Space in the months ahead.