Following our GTA V benchmark from yesterday, we decided to embark on a mission to determine the impact of texture qualities on system performance and visual acuity. We took screenshots of identical objects at Very High, High, and Normal texture resolutions at 4K, then compared the textures in combined screenshots. During this process, maximum theoretical VRAM consumption and texture quality impact on FPS and tearing were also analyzed, resulting in a specific settings benchmark for GTA V.

These screenshots are from our benchmark. The below images show all available options for the game's graphics, including texture resolutions at normal, high, and very high.

Note: The above screenshots show all settings. We tweaked some of the above for this test, including disabling FXAA.

For purposes of this graphics comparison, we took easily replicable steps on each texture resolution setting to ensure accuracy of results. All graphics settings were configured to their maximum value on the “graphics” tab – so that'd be “very high” and “ultra” – with the exception of anti-aliasing effects, all of which were disabled. Screen resolution was set to 4K.

We traveled to preselected locations and entered first-person mode. Once in FPS mode, we stood on designated “landmarks” and took the screenshots.

We face two issues with presentation of screenshots as data: They're massive, consuming large amounts of server bandwidth and greatly hindering page load time, and they're comparative, so we've got to find a way to show three shots at once. In order to mitigate the impact of each issue, we used a selection marquee of 546x330, selected a detailed portion of the 4K image, and then pasted it into the documents shown below. There is no scaling involved in this process.

Because file sizes were still an issue, we then scaled the finalized document into an 1100-width image, embedded below. Clicking on each image will bring up its native resolution in a new tab; no scaling occurred in the saving of these images. They're much larger images and will require longer to load. 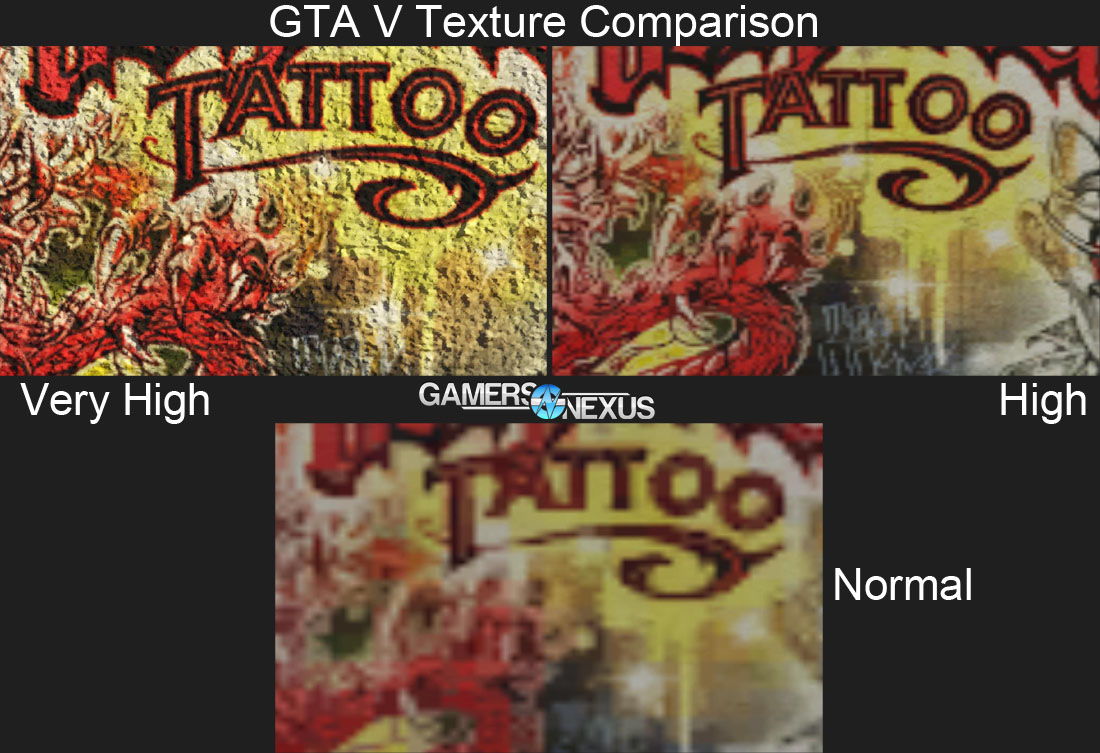 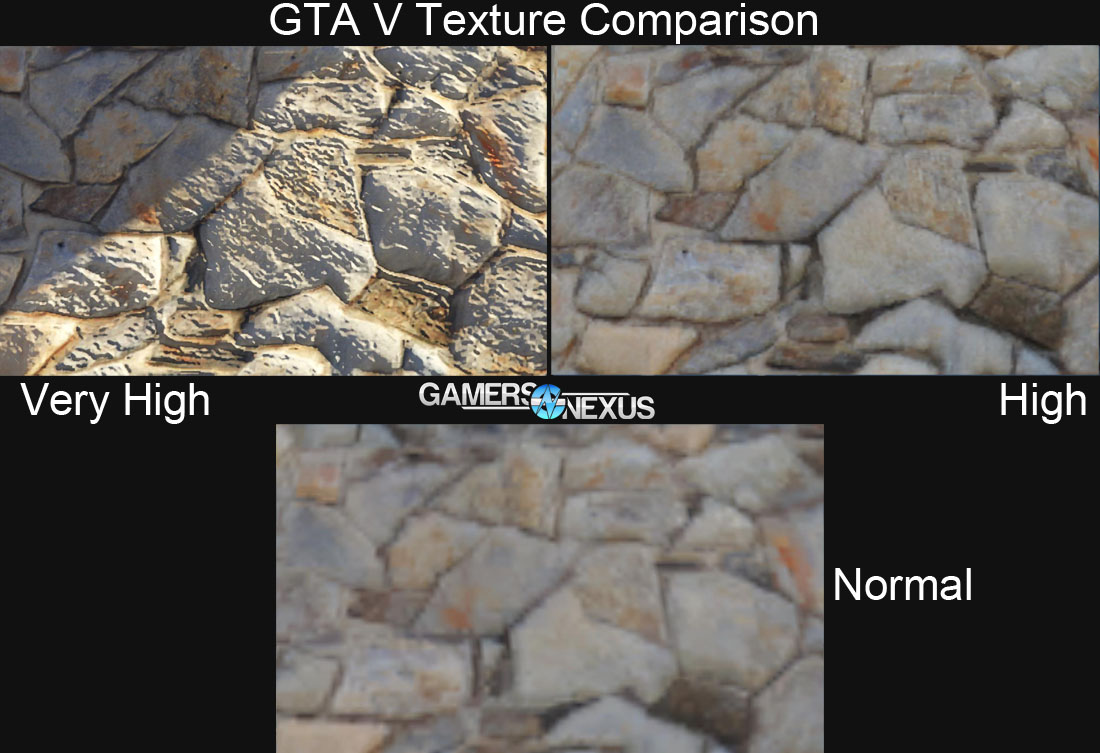 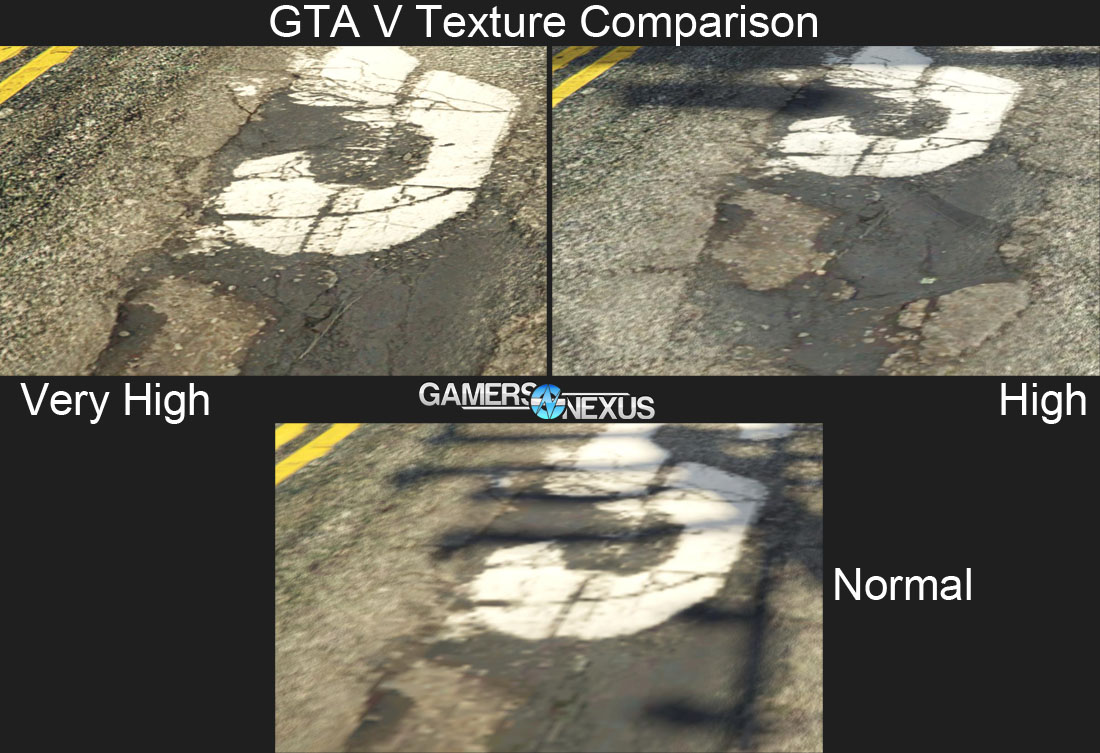 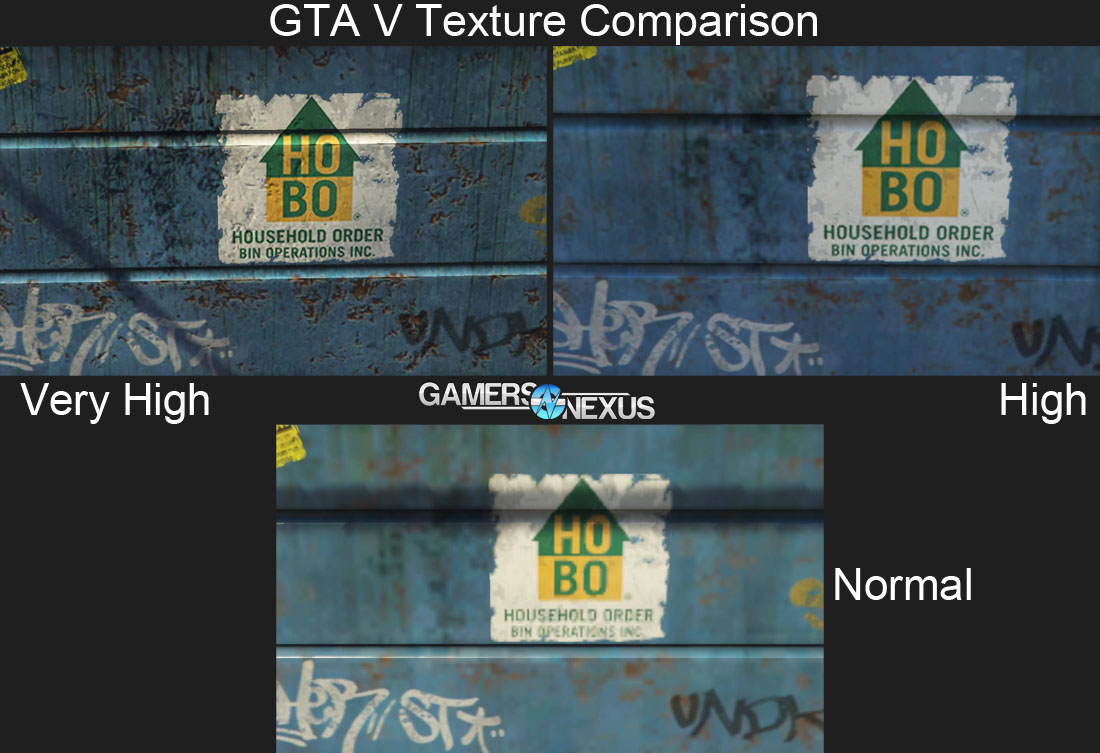 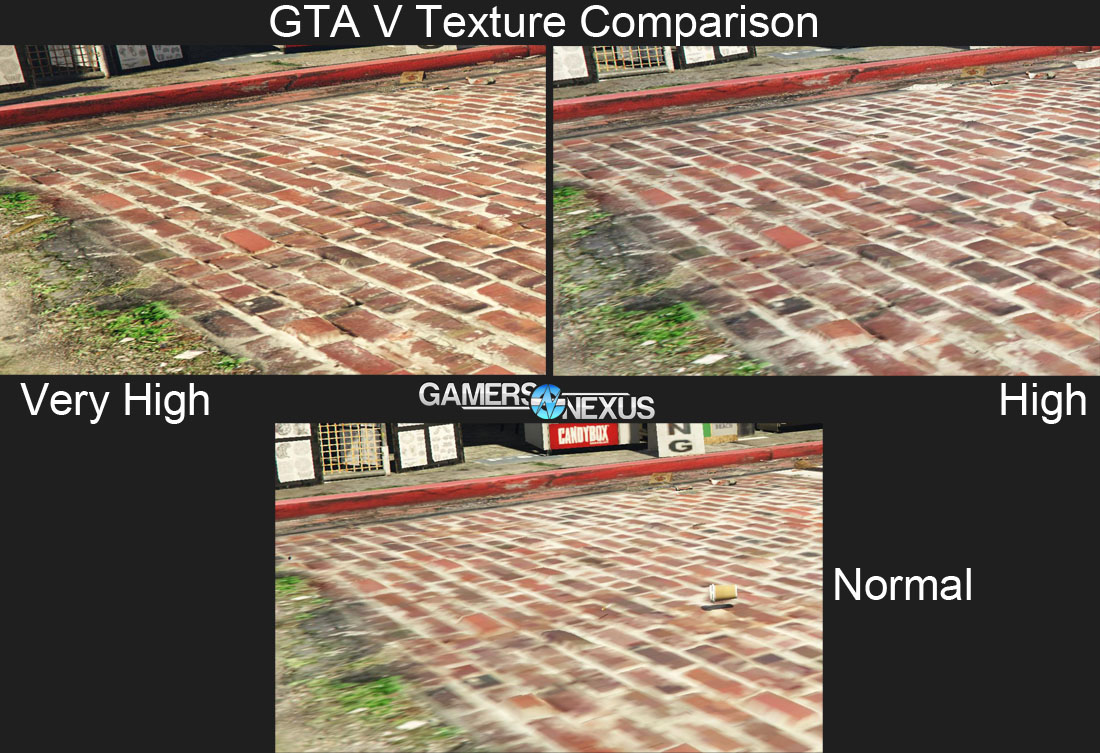 The visual contrast is stark. Looking closely at detailed portions of the textures, we can see that even Very High and High have contrasting depths and grittiness in their display.

To best demonstrate VRAM consumption, we built a delta value chart over the “normal” setting as a baseline. Note that VRAM consumption for texture quality at 1080 and 4K is the same, so the value does not scale with resolution (as other values will – like AA).

“Normal” is used as our baseline (0MB consumed), with “High” and “Very High” presented as deltas over normal. The VRAM usage is in MB.

There is a massive difference between “normal” textures (effectively used for legacy and 1GB devices) and the other two settings, but the difference is less noticeable between High and Very High – about 100MB. For most users, this will be inconsequential and can probably be left as Very High unless performance issues are exhibited (explained below).

Using the same test methodology as deployed in our GTA V review – we won't retype all of that here – we tested GTA V performance using various texture settings. The rest of the game's graphics settings are as described above. Advanced settings were left to their defaults (off).

Performance was measured using FRAPS and analyzed with FRAFS, then compiled in a spreadsheet. We tested for average FPS, 1% low FPS, and 0.1% low FPS (effectively the lowest 1% and 0.1% framerates, rather than using outlier minimum values).

After uncertainty was instilled from receiving nearly identical results on a Titan X with a 4K resolution, something we predicted would bottleneck enough to show a disparity in texture resolution, we decided to also test 1080p. Little difference (within margin of error) was shown using the Titan X at 1080p and varied texture qualities. We then implemented our 270X – a moderate performer – and tested using 1080p with “high” and “very high” (max) settings, along with varied texture qualities.

FPS is effectively identical. What isn't identical, though, is the fluidity of gameplay. This is something we can't display as easily without an FCAT rig configured, something we didn't do for the purposes of this test. During 270X testing – where we exceeded VRAM capacity using forced texture quality settings – tearing became more prevalent in frame output and had a jarring impact to gameplay. In the event this bothers the user, it would be beneficial to reduce the texture quality (along with other settings) to lessen the requirement on VRAM.

Conclusion: Textures Have Small Impact on FPS, but Noticeable on Fluidity

The VRAM consumption is massive between the lowest and higher settings, but nearly inconsequential between the two higher options. FPS output is effectively identical using all texture quality settings with controlled values elsewhere; frame output exhibits more frequent tearing when using texture quality values that force VRAM consumption beyond the capacity of the card, but this may not be of concern to some less picky users.

The visual impact of texture qualities, however, is massive. Where possible, we would advice avoiding a texture quality drop as it will have a fairly immediate impact on visual fidelity.

If there is an interest / demand for the original 4K screenshots, we will consider uploading an archived pack for further comparison. Please comment below if this is of interest. There are bandwidth and load concerns, so we'd have to figure out the best solution and can't promise availability of the files.