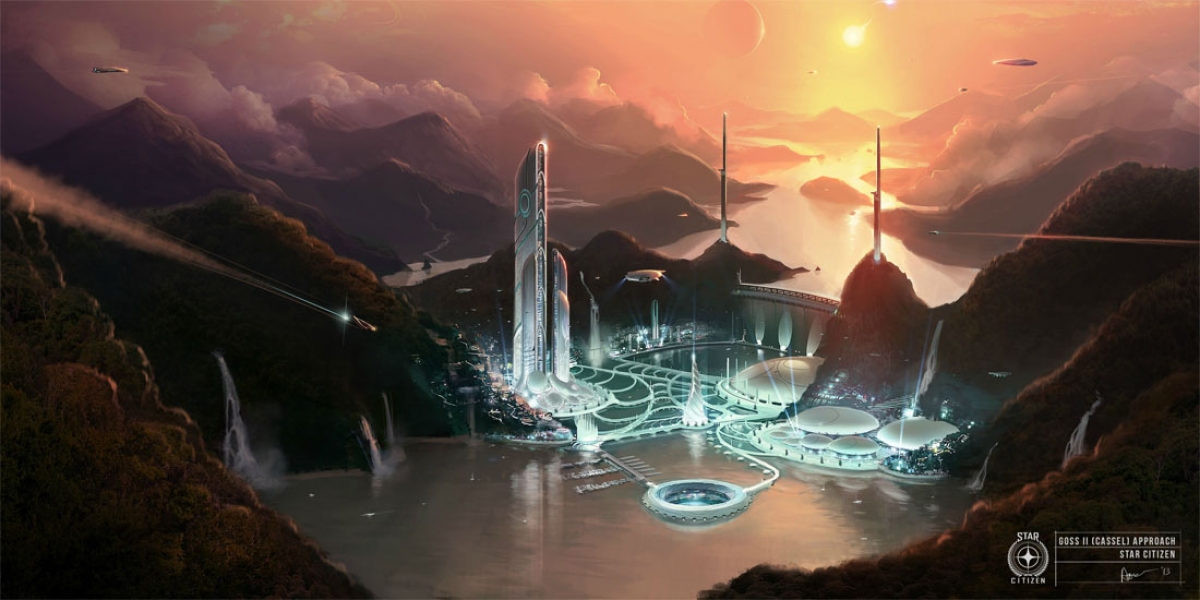 I’m glad we had that discussion. The below footage is a pre-interview conversation between myself and Chris Roberts, the visionary behind Star Citizen, covering deep space exploration and Star Citizen’s plans for literal FedEx quests. Note that this video was not intended for publication, so it’s rougher “behind-the-scenes” footage with some more fidgeting and live audio changes than normally.

As a part of this same “film everything” approach, we also managed to capture a genuine dialogue between long-time friends Chris Roberts and Richard Garriott, found here. We recommend it – it’s short and entertaining.

Covered in the embedded video above, Roberts addresses preliminary questions pertaining to the exploration of deep space within Star Citizen’s universe. The game is known to have a heavy focus on adventuring through the vast, oft-empty wilds of space, and it’s been a looming question as to how CIG hopes to make wandering the black void interesting.

“The big picture is finding a jump point and charting it,” Roberts told us, referring to PAX South unveils, “navigation degrades over time, so it’s not just ‘one person discovers the jump point and charts it’ – people have to chart the jump point on a regular basis. The path becomes stale because the wormhole slowly shifts,” the industry veteran explained, moving his hands in circles in an attempt to remind us of this video.

Roberts indicates that the paths charted through wormholes become invalid due to the shifting nature of the wormhole’s walls, creating demand for an explorer to re-chart that wormhole on some unspecified basis of time. As MMO veterans, we’re used to in-fiction explanations of repetitive content and grew concerned that such a task would ultimately feel repetitive. We asked Roberts if there’d be a risk of creating a grindable task – go here and discover that, repeat once a week.

The luminary immediately countered our concerns, indicating that “a grind [in my mind] is doing something that isn’t fun or rewarding. There’s a skill element to piloting. A lot of this is procedurally-driven, so the way the things shift around creates a challenge to fly [through the wormhole] and not hit the sides. That’s a pretty good example of where piloting skills would be important.”

Roberts further noted that combat experts may not necessarily be inherent ace pilots and that, as in the case of racing, wormhole exploration provides an avenue for that individual skill.

I mentioned that a redditor – MageoftheYear, who has been abundantly patient – has wanted to know how left-behind cargo can be transported to the player. In the instance that a player picks-up a new ship, freight, or weaponry that can’t be given permanent cargo space, Roberts noted that players would be able to ship that item back to their hangar.

Chris Roberts told us that a mission would be generated for an NPC or another player, effectively creating a “shipping service” task. Inventory management is a key part of exploration, we were told, and it's possible to get equipment and even ships delivered to players.

“Say I found some multi-super-badass cannon and I put it on the space station and say, 'please ship it back to my hangar on Terra,'” Roberts said, “[this] generates a mission taken by AI or an NPC [that] says, 'take this package back.' When it goes back, it's added to your inventory for your hangar.”

I then moved the conversation along, feeling that we were at a good point to begin the “proper” interview (our previously-published zoning and instances content).