Everything We Know About Fallout 4 So Far 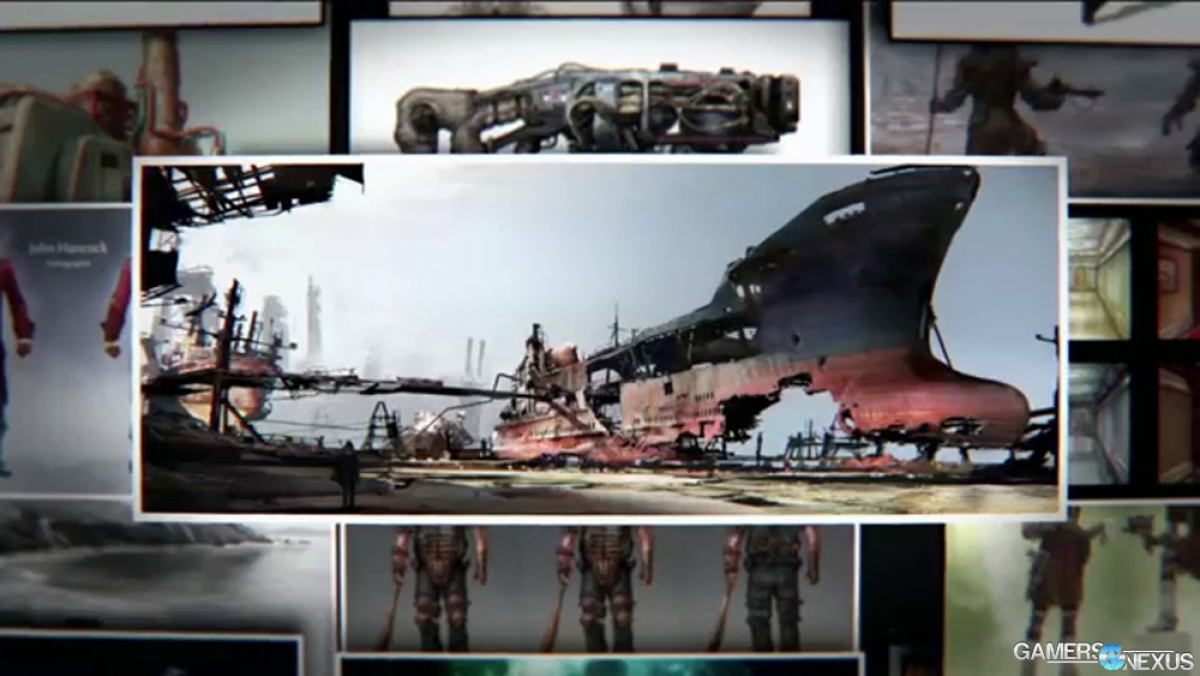 We already covered Fallout 4’s initial trailer, along with analysis of what was seen in the reveal. Just Sunday night, Bethesda showed more of the much-anticipated post-apocalypse title at their E3 press conference. This is by far the most comprehensive view of Fallout 4 we have seen to-date, so now comes the time to look over everything.

(Note: The screenshots used are the best we have available -- the streamed presentation was locked to 360p).

This Fallout 4 E3 preview looks at everything we know about gameplay, graphics, release dates, and concepting so far.

Starting off the presentation, Bethesda reveals that they’ve been working on Fallout 4 since the release of Fallout 3, so since 2008. Truly an impressive amount of time, even with becoming busy and a little distracted with Skyrim. They start by speaking about how they work to have all the small things come together to create an immersive world, noting that even the small things are important.

After this, Bethesda shows a large variety of concept art for Fallout 4. The concept art varies quite a bit, from destroyed cities, to robots, to power armor, to even working airships. It looks as though Bethesda truly considered doing some things really out of the norm with Fallout 4. 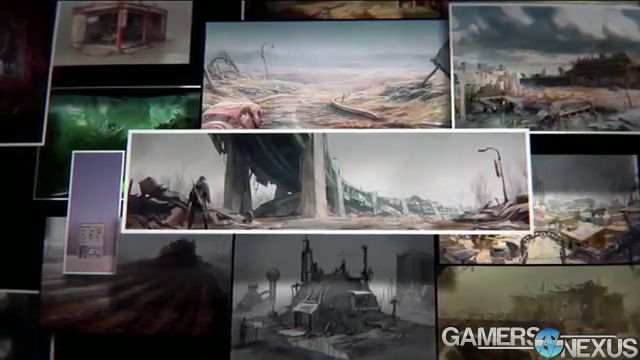 After this, Bethesda shows how the game starts. The game starts before the war and in a house. Player customization is first, with face sculpting first -- done by clicking and dragging the face of a man or woman looking in a mirror. Bethesda has taken a step away from previous Fallout and Skyrim games by completely getting rid of their slider based facial construction method.

Bethesda then shows that the player can also switch to a female character, at which point the wife says “my turn, big guy,” and steps in front of the mirror. 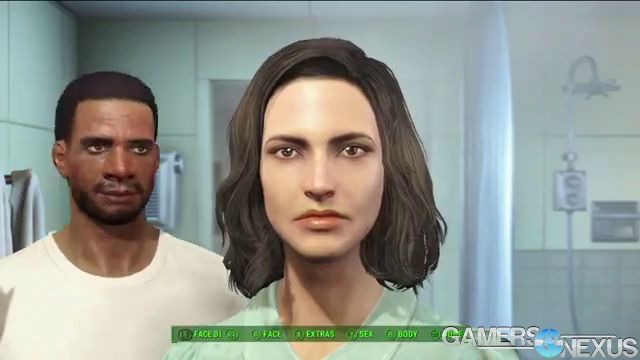 A small note on faces: Bethesda looks to have substantially improved facial models. Bethesda has gone from the somewhat potato-looking faces in Oblivion to now fairly realistic and accurate facial models. The baby (shown) is also dynamically created based off the looks of the player created couple.

Next we see an appearance of the robot Mr. Handy. A nice touch, but what’s more significant is that the player audibly thanks him for the coffee, then comments on Nuka Cola and the Sugar Bombs cereal. This is fairly huge for Fallout, as the main character has never actually had a voice before. This, along with later events in the trailer, show that the player character will have a voice. 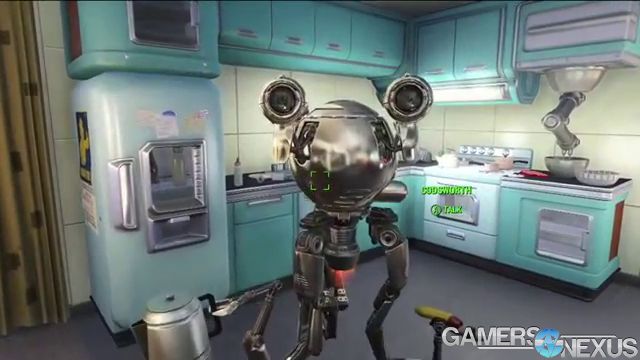 The player then greets a vault tech employee at the door. In conversing, the camera shifts to show the player speaking, and then back to show the NPC speaking. This also shows another new feature in Fallout 4 compared to Skyrim, Fallout 3, and Fallout New Vegas. 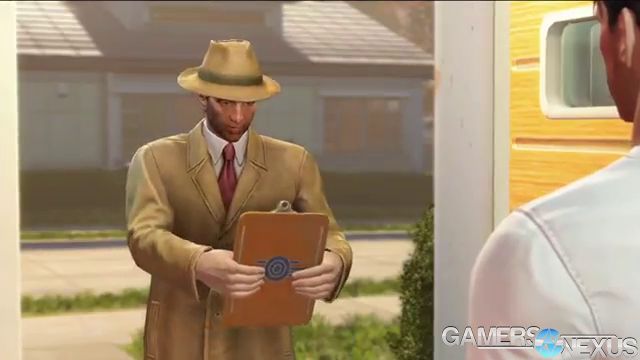 Through the Vault-Tec employee, the player picks attributes such as strength, perception, intelligence, and charisma. 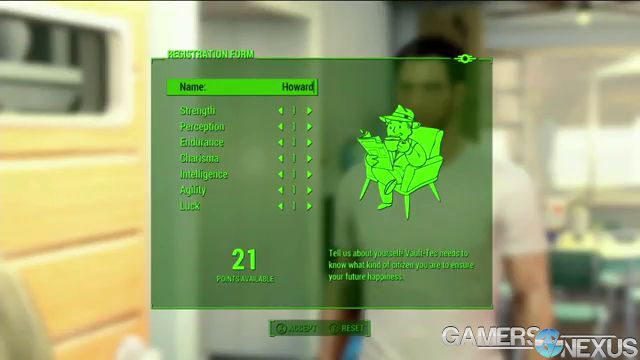 The robot, Mr. Handy, also notes that the child, Shuan, is crying. Mr. Handy even uses the child’s name. Bethesda points out that this isn’t just a demo, but that they recorded around 1000 of the most common names.

The player then hears of nuclear detonations in other cities via the TV, and proceeds to run to the vault with the child and wife. 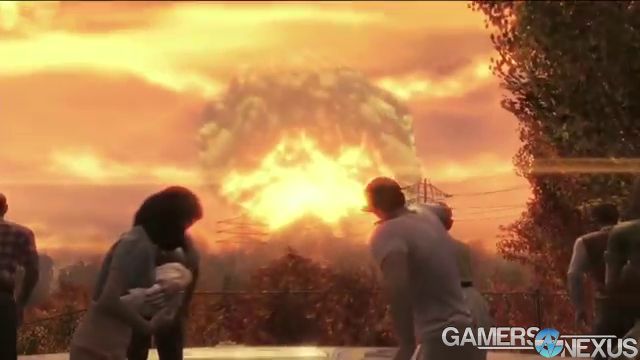 The last moment shown of the man, wife, and child is them standing on the vault opening, on what looks to be the elevator, when a nuclear bomb goes off and the shock wave hits them. Considering the shock wave of a nuclear explosion would normally kill a person, we’d expect the family to die; that, fortunately, wouldn’t make for a very good game. Bethesda says they won’t reveal anything about the story line, but shares that the player character shockingly lives and is lower into the vault. Then “events transpire,” 200 years pass, and you (the player) emerge as the sole survivor of Vault 111. We think this points to some sort of slowed aging sleep state or cryogenic sleep. 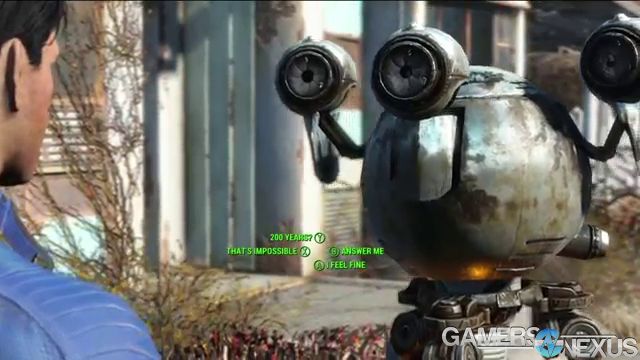 Bethesda then shows the player character emerging on the elevator to the wasteland. Bethesda notes that player freedom is still their #1 goal, and this is shown through later events in the presentation.

A quick note on animation: we see a lot of walking, and I must say that the animation of the PC walking is much improved from Fallout 3 and New Vegas. The arms sway realistically and the player actually looks to be pushing themselves forward with their legs, rather than gliding forward while moving their legs. The running animation, while not quite as smooth, is still a large improvement over previous games.

Next, the player goes back to their home (now in the post-apocalyptic world) and talks with the Mr. Handy robot (whose eyes somewhat creepily keep adjusting their features). The player talks with Mr. Handy about what has happened. When Mr. Handy says it's been 200 years, the player responds “I can’t have been out that long,” which lends more validity that in Vault 111, there’s some sort of cryogenics or slowed age sleeping used. 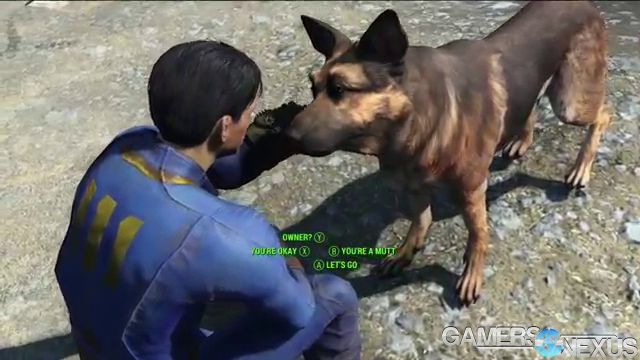 Bethesda then talks about how conversations can be done in first or third person and are extremely dynamic. Unlike previous Bethesda games where you locked into conversation, in Fallout 4 you can walk away during conversation, or -- y’know -- shoot them. Time will no longer stop when going into conversation.

The next scene shown is the player meeting and recruiting a dog as a companion. What’s more interesting is the command system for companions. By pointing at various objects in the environment, the player can command companions to go to a place, inspect something, bring something, and hopefully kill something. As an example, the dog is commanded to grab a wrench, and actually grabs and carries the wrench in its mouth to the player. 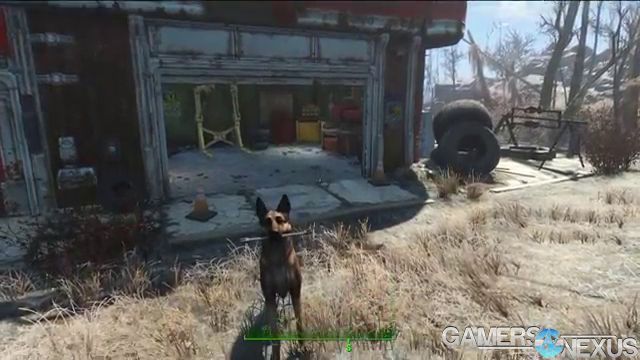 In the combat mode, the player uses VATS, which is a queuing system for attacking in Fallout games. This is no surprise, although it is different that VATS no longer completely stops time like in previous Fallout games, it simply slows it.

Bethesda next confirms that the location is Boston.

Some in-game screenshots are shown: crashed planes, mines, tree houses, new monsters, trains, towns, (what appears to be a) metal refinery, and super mutants are seen. The player is shown walking through a market that looks to be in Fenway Park. 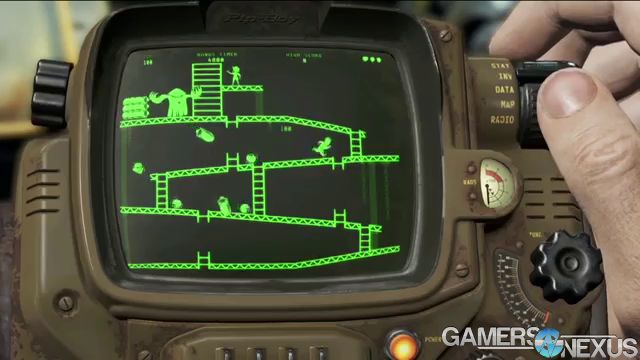 While exploring the pip-boy, Bethesda reveals that they (finally) have a layered armor system. Hopefully I can now wear my knee pads with my pants -- ground-breaking technology, really. Bethesda also shows that players can play mini-games in Fallout 4 using the pip-boy.

Bethesda has also made a real pip-boy and a pip-boy app that works with an iOS or Android phone. A player can now use a real pip-boy for in-game player modification. Bethesda describes it as a dual screen experience; it is yet to be revealed if this will be more hassle than it’s worth.

Bethesda also notes that they will make a mobile Fallout game, in which the player is the vault overseer. This is certainly not expected, and it is currently not our focus – Fallout 4 is. That being said, to quickly overview it, Fallout Shelter will be a game in which the player is the overseer and controls their vault. The game will be free and won’t be pay-to-win. It comes out tonight for iOS, but nothing was said about Android.

Moving back to Fallout 4, the player is able to scrap materials and build structures. This allows the player to build settlements. Houses and stores can be built, food and water can be 'planted,' and traders can even settle there. Power generators, switches, and wires can all be made and used to power defences and lights. Settlements will be attacked by Raiders and other NPCs. Bethesda also notes that multiple settlements can be made, and Brahmin caravans can move inbetween them. Of course, all this is completely optional to do and isn’t required, but is still incredibly cool. 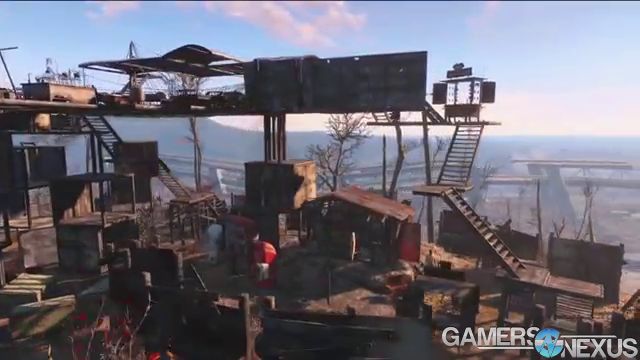 Bethesda has taken a more unique approach to crafting compared to previous Fallout games. More items can be used as input for crafting, making for a more freeing system than previous titles and gives a lot more items value. For example, a toy car can be substituted for a globe since they both have same needed part in a recipe (screws for example). Bethesda also notes that there are over 50 base weapons and over 700 modifications for those weapons. The modification system is not limiting by what’s shown, instead it looks like the base weapons can truly be changed at almost every aspect. So suddenly a baseball bat can have two large sawblades attached to it. Why? Because it’s Fallout. 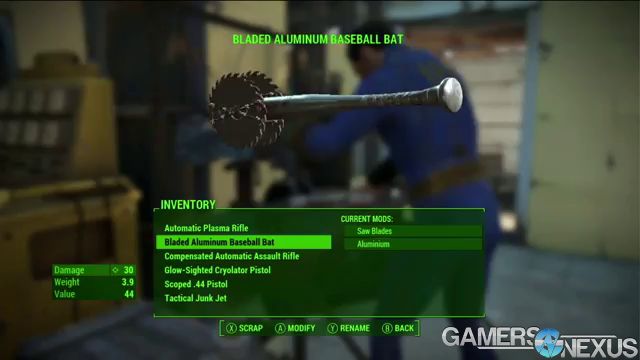 It also appears that death cinematics for the player will be a reality, as the players is seen being picked up by a deathclaw and killed. Bethesda also shows the player throwing down a smoke signal to call a vertibird, which the player then climbs in and mounts a gatling gun. 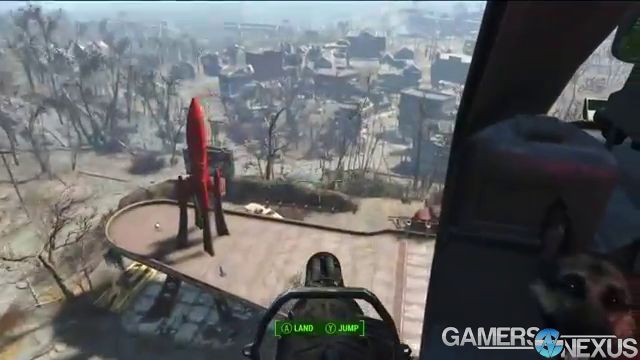 The player is next shown watching an airship crash to the ground, then shooting a missile at a brotherhood initiate in a vertibird. Looks like the brotherhood will be present in Fallout 4 in a significant way if they have access to vertibirds -- something they didn’t have in Fallout 3. 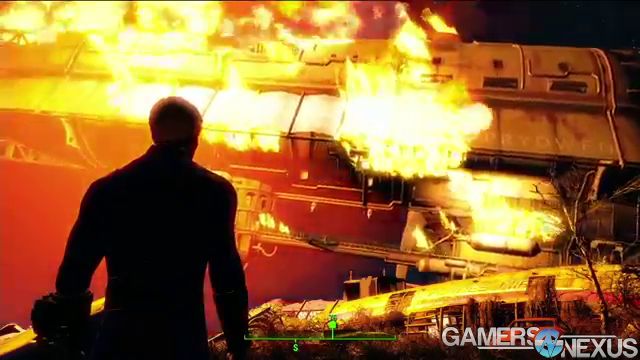 The combat montage ends with a bright blue light in a city, followed by a very large explosion.

This video shows us a lot about Fallout 4. It’s clear that Bethesda is really trying to do something more than they’ve done in the previous Fallout games. The settlement and crafting aspects alone are major, and other gameplay elements -- like dynamic conversation systems and a player voice -- add further to this.

The second glimpse of Fallout 4 is promising. We hope that it lives up to the hype and promise Bethesda is building up for it.

Bethesda leaves off on one last note: Fallout 4’s release date is slated for November 10, 2015.