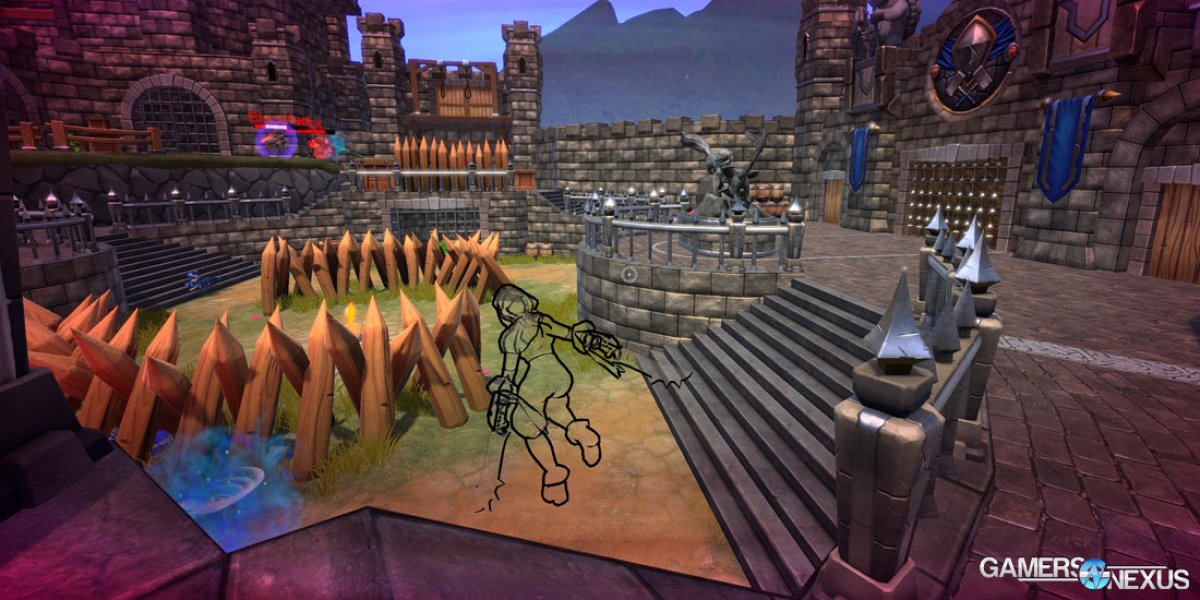 The above gameplay video contains our initial, hands-on impressions of Overpower. Commentary is accompanied by gameplay footage collected from around 90 minutes in-game, during which team we played with devs and play-testers in an early build of the game. Overpower recently failed to meet its Kickstarter campaign goals, but has already been approved through Early Access on Steam. As always, we recommend cautioned investment in any pre-release title.

Gameplay is fairly drop-in, drop-out, as one would expect from most casual FPS pub formats. We're given a choice between four classes (ranger, mage, assassin, warrior), each with two customizable abilities and an immutable class ability. The abilities are mostly different flavors of damage, snares/stuns, or recovery archetypes, and can be activated strategically for some limited synergy. Ability combos aren't really all that common right now, as the simplified mechanics more-or-less limit us to firing an ability and waiting for the cool-down. That's not a bad thing, just don't expect to be calculating killer combos.

The synergy is good when it's present, though. As a ranger, I'd often be able to land at least one near-fatal, fully charged attack (click and hold to charge a basic attack) before my opening would take cover. One of my abilities was a homing arrow that locked onto near-dead targets; the homing arrow often finished my work for me.

Gameplay is fast and fluid and respawn timers are non-existent, creating a game that feels distantly like Unreal Tournament in its match pacing. The maps currently feel a little small and could use some more interesting level design elements – something to make things more interesting and more adequately match the UT inspiration that the developers have established. Suspenion (UT3) had that under-the-bridge area with the Redeemer, for instance, and UT2k4 maps often had side tunnels or tucked-away corners that rewarded players just by nature of facilitating ambushes. Overpower could use some of that same treatment. 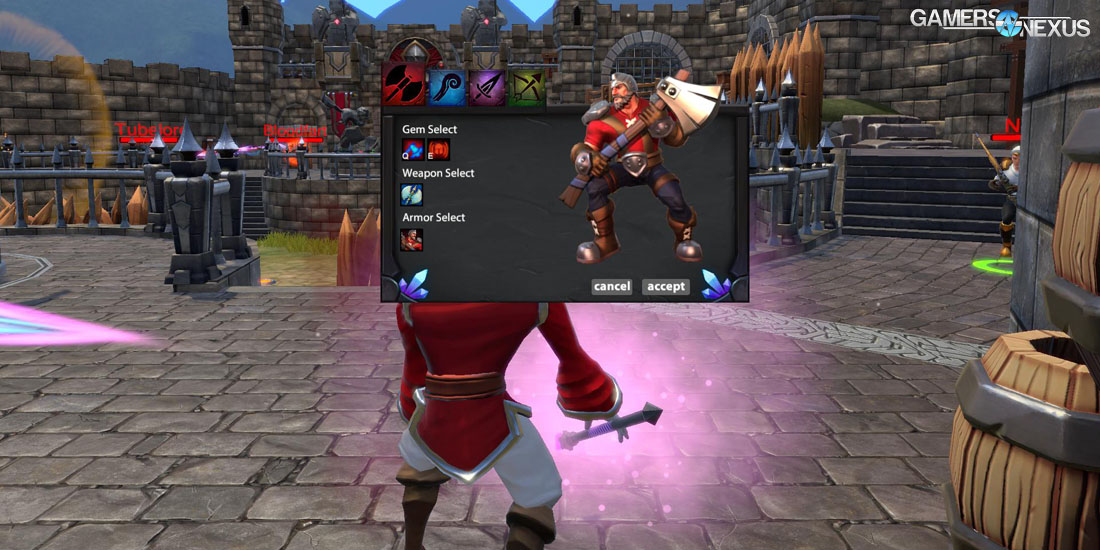 Balance and bugs still need to be worked out, graphics are being overhauled, and the team is working its way through the Greenlight process, but there's promise yet. If you're looking for games like Chivalry: Medieval Warfare, but want a new twist, Overpower is easy to jump into. We enjoyed our hands-on time with Overpower and found the gameplay to be mechanically intuitive. If the developers can hit a homerun on their impending graphics, balance, and bug overhauls, it'll just be a matter of getting 'discovered' by the right type of players.

Learn more from the official website here. Our script for the video is below.

I recently had a hands-on gameplay session with Overpower, a new arena PVP game set in a medieval-fantasy universe with undeniable sources of influence from Unreal Tournament, Team Fortress 2, and MOBAs.

The game is currently in an early state and not anywhere near complete, but the rudimentary gameplay mechanics are in-place and indicative of the overall 'feel' of the final product. Overpower centers around the tried-and-true arena combat often found in multiplayer shooters and FPS games, but relies upon medieval-fantasy themes instead of modern military; wizards, rangers, warriors, and assassins rule the day, each using various player-selected abilities in the standard smattering of gameplay modes – including TDM, DM, and a CTF equivalent called 'critter capture.'

For the limited demo we played, all abilities and classes were fully unlocked and switchable between deaths. The experience is pretty simple and boils down to the usual spawn, kill, die structure, with the potential for objective captures scattered in between. It's within the 'kill' portion of that flow where the game shows itself – three core abilities accompany base attacks, one of which is unchangeable and specific to the class, the other two are selected during the spawn screen. There's not much in the way of ability combos, but there are complementary abilities; playing as the mage, for instance, we found damage shields a good complement to closer combat tactics, as they forced engagement from melee classes and created a unique damage-for-damage trade. The assailants have to keep in account their own health as they wail upon the mage, who could trigger a stasis to regain health and pushback attackers.

Which is interesting, because my first thought upon reading the 'stasis' ability – which basically immobilizes the player, but regens their health and power – was that it'd be useless. I've never liked stasis in any game, as it often just defers the inevitable; I like power and damage, and will always forgo temporary defenses in favor of destruction. In Overpower, however, I quickly learned from my opponents that stasis is as offensive as it is defensive. Complementing the ability with the correct counterpart, like a damage shield, you could cause serious setback to attackers who've got you on the brink of death. That's a fun mechanic, and one which instantly turns the tide of combat.

And all the classes work like this in one respect or another. Rangers are another good example: They deal damage from afar, naturally, and can strike near-fatal blows from across the map. I found I was often able to deliver at least one fully-charged attack before my target spotted me – often by hiding up in the rafters somewhere – and then I used a homing arrow ability as a follow-up. This worked exceedingly well, as the target would normally take cover after I'd landed one shot, but the homing arrow would sort the rest of the dirty work for me.

All classes felt reasonably playable right now. I did at times feel a distinct advantage when playing as the assassin, mostly because the stealth mechanics allows a quick duck-in, duck-out style of combat that closed distance rapidly, but the better players were still able to thwart my subterfuge.

Overpower plays fluidly – just like TF2 in terms of spawn times and constant action – and has serious potential in the market of casual arena gaming. We've always liked the Chivalry series, but have at times found it a bit cumbersome with its learning curve; Overpower is perhaps a more familiar style of play for both MMO and FPS players alike, and takes a less-than-serious approach to its overall direction.

We think makes an excellent fusion of casual play and mechanical depth. If the team can sort their balance and bugs, Overpower is certainly worth a look. The game isn't finished right now, but is available through Kickstarter and Early Access. We're not big fans of the early access model and always strongly caution pre-purchases, and that applies here, too. If you're uncertain, just wait for the game to finalize its development and check-out our final review content.

If you like our style of reporting be sure to subscribe, share, and hit that Patreon link in the post-roll video. Thanks for watching – I'll see you all next time!