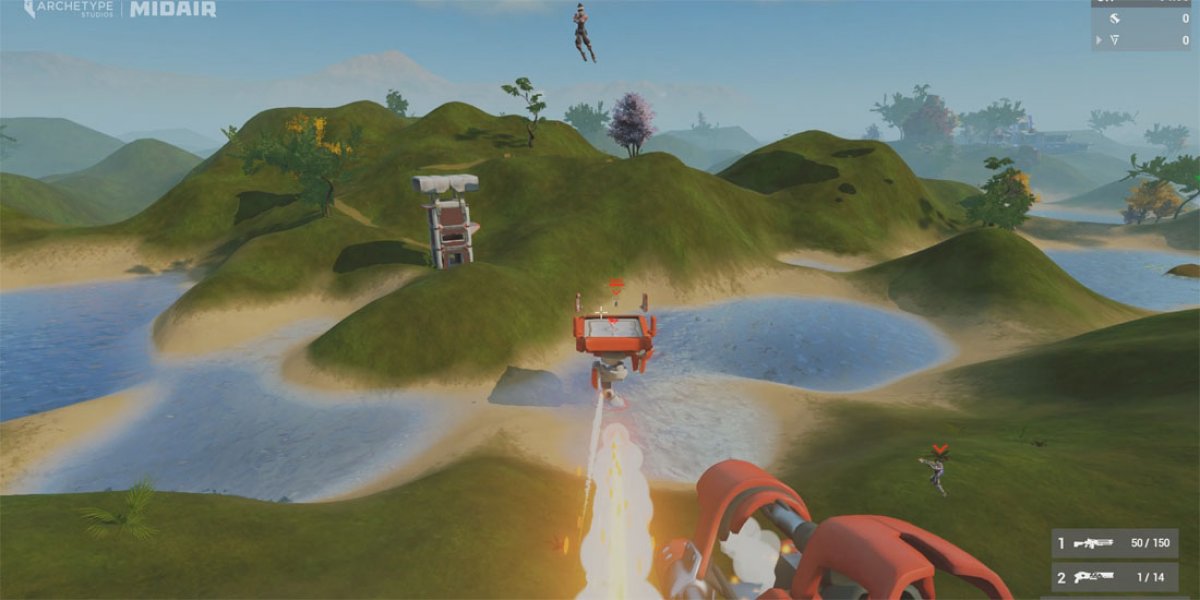 Midair is the company’s attempt to revitalize the style of fast-paced, high-movement gameplay that made Tribes iconic. The game features the classic “skiing” gameplay, using rolling hills and a combination of space bar and right-click (jet pack) to accelerate, and prioritizes the ability to aim above anything else.

Archetype Studios has plans to bring in vehicles and will use a free-to-play model, something the team thinks necessary to compete in the modern twitch shooter market. Chris Mathews, Lead developer of Midair and CEO of Archetype Studios, had plenty of vehicle ideas to share with us at PAX. Amongst them, a two-person bomber plane, an armored personnel carrier, and a one-person bike-sort-of-thing (think: Land Speeder). One of the most interesting vehicles to us was the tank, which Mathews compared to the Siege Tank from StarCraft. The tank will deploy for long distance attacks or can remain mobile, but with a more limited range and power.

Midair hopes to learn from Tribes: Ascend and avoid the pay-to-win route that Tribes fell into. In Midair, not every weapon will be available for free in the beginning, and players will unlock weapons through gameplay pathways. Players can optionally “buy the game” to unlock everything, at $30, but Mathews emphasized to us that gameplay would be more heavily impacted by mechanical ability than weapon choice. In our demo of the game, we found aim and speed to be the expected core mechanics of Midair, and realized quickly that a lot can be done with a little bit of skill and even low-powered rifles.

Midair also has a loose background that was slowly developed by Archetype, more to explain design elements than build a story. As Mathews explained, “magic holds everything together” in the world of Midair. The technology is on the maps to harvest magic, which is used visually as ammunition for some weapons. This isn’t a story you’d follow for any reason other than design approach and keeping a cohesive aesthetic. The game is entirely about gameplay mechanics.

Midair feels exactly like it should -- a Tribes game. The skiing was smooth and fluid and the ascent on the jetpack feels intuitive, once understood. Tracking your shot is a huge part of the game and one that led to the downfall of the GN team, but we felt encouraged to get more hands-on time and figure it out. That’s exactly what a twitch shooter should be about: Improving skill as a core reward mechanism.

We'll be looking at Midair more closely now that we're out of the convention environment. In the meantime, it's worth some initial research for fans of twitch shooters: https://www.playmidair.com/