Grandiose expos like E3 publicize American gaming culture to the world, but what is it like to be a gamer in other countries – like Pakistan? Every year I am tempted to attend E3 when it broadcasts live. The expo is a gaming symbol to the world, and thanks to events like E3, we all know what it is like to game in the US and Europe. Have you ever wondered if gaming elsewhere would be any different?

A Gaming Expo in Pakistan

The specifics of countries dominated by gamers elude me, but I do know this – here in Pakistan we face a number of very real threats and roadblocks. The possibility of playing Call of Duty while real bombs are detonating nearby adds to the tension like you wouldn’t believe. Allow me to divert your attention to gamers halfway across the world.

We don’t have websites owned by mega-corporations, but we do have a little online community with more than 20,000 gamers from around Pakistan. They call us the “PakGamers,” presently the largest Pakistani VG group. We aren’t as organized as TGS, GDC, and LANAgeddon, but PakGamers do arrange LAN parties in different cities across the country. If we’re lucky, someone might even have a back-up generator to power us through the night! 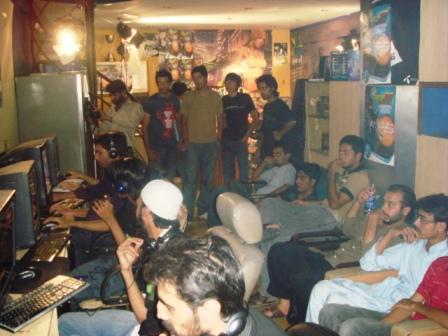 That’s right, we need generators to play. Pakistani gamers are a unique breed. We don’t have horns or extra fingers, but we do put up with game-killing problems. Pakistani gamers face constant electricity failure and social criticism, making it an achievement in itself to break into the gaming world. Some regions of Pakistan have power outages every day for several hours, rendering us completely unable to play any games requiring a socket-powered system.

Initially, every youth – at heart or in years – in Pakistan was drawn to video games. The lack of support from our elders and the public makes it challenging to claim oneself a ‘gamer,’ and the common conception is that all gamers are kids, as games are ‘for children.’

Social differences erupted nationally thanks to games like God of War, where nudity makes a spotlight appearance. Sure, there’s a rating level – but nudity in video games? RockStar’s Manhunt and GTA IV don’t help boost public opinion of gamers either, even though it is all done for sales. Our culture does not support such games, that is where the fundamental differences lie.

The judgmental parallels to rock & roll music of the US in the mid-20th century are outstanding, but we endure the disparagement just as fans of Led Zeppelin did. Nonetheless, more Pakistani gamers emerge into the scene every year.

Just like elsewhere, gamers are generally friendly (if not a bit edgy) here, but the fanboy war is hardly any different in my country than in yours. PS3 fanatics honor the mighty Playstation and tease Xbox 360 gamers; Xbox users taunt PC users, and PC gamers take on everyone. Gamers rage just as much here as they do elsewhere, though I'm sure the article on why gamers swear would be slightly different! Despite our console-based differences, there is a very large PC gaming community in Pakistan.

Gaming press isn’t as competitive here as it is in other nations. There is only one major gaming magazine (Game Mode) and an even smaller developer (Mindstorm) for all of Pakistan. It’s embarrassing, but these companies are a great source of pride for all the gamers in Pakistan. Mindstorm Studios is known for developing the world’s most sophisticated Kricket game and a few other casual titles.

It’s a sketchy topic, but definitely a serious one. As much as we don’t like the severity of real-world issues to invade in our gaming, it’s unavoidable in my country. Pakistan has been terrorized for centuries, and gamers are not immune. Being at constant war makes it extremely discomforting to play games like Call of Duty, Medal of Honor, or Battlefield, great as they may be. Certain lawyers, like Jack Thompson – who famously dubbed RockStar’s Bully a “columbine simulator” before it was released, seem to think that games of the any genre fuel a community of violent teenagers across the world, training them to use weapons in real life. Let me be the first to tell you: if that were true, Afghanistan would be the country with the largest gaming community.

All said and done, are Pakistani gamers worthy of moving to the forefront of gaming communities everywhere?

This was just a glimpse of Pakistani gamers, and hopefully you’ve learned a little bit about how much an environment can impact gaming. What do you think? Leave your comments in the section below about what the gaming community is like in your country.