It seems like everyone wants to get their dirty, stinkin' hands on our maps these days. A product whose real world counterpart is threatened by the GPS, video game maps are going the same direction: "Hey, you're doing that quest with the rats for me, right? Let me just put a dynamic, clickable, fast-travelable button here for you. There you go, right there. Yes, you haven't been in that region before -- just click the button, no need to wander."

So it might be a little exaggerated (or not, as revealed here), but you get the picture: NPCs are out to kill us. 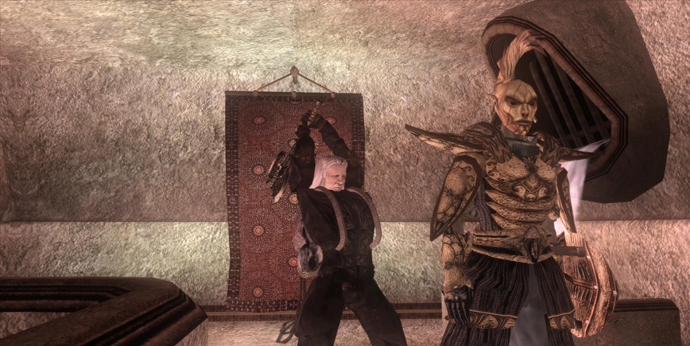 Whether intentional or not, developers have provided these evil, plot-subverting bastards the tools necessary to ensure the world is never seen. That's one less damsel you'll save, one less soil-yourself-at-night dungeon, and of course, more dedication to the task at hand. The point, though, could arguably be just that -- map marking fetishist NPCs, greedy as they are, may simply be attempting to streamline our ability to complete quests; if this were the case, it would prevent those journals from being flooded with "eh, I'll get to it if I'm ever there" type quests.

But it's not the case. They want your attention, they want your help, and they want to give you lots and lots of crappy items as a payout. You're the slave of an unimportant NPC, whether you like it or not, and are completely incapable of exploring the map how you want to thanks to this. Lucky for you, I have a solution, but it's a secret. In fact, it's so secret that -- with just one slip-up -- readers of this solution could expose its contents to the NPCs of popular game world. What would those pesky Imperial Guards do with such knowledge? Well... they'd probably imprison the character with possession of such information within a dungeon beneath the Imperial Palace. Oh, wait - I'm being informed that's been done before. In that case, the character in question will be flogged publicly, stripped of all equipment, and then have his save files corrupted in front of the whole world.

What a terrible fate.

So what's this all-important solution? It starts with a G and ends with, uh, enocide. Yes, that's the one! The next time a gender-confused Oblivion (or otherwise) NPC asks to write on your map, follow these simple steps:

Yes, just kill all the NPCs that ask to write on any maps. Better still, this act will enable the unveiling of unexplored environs. It won't be an easy task, so we encourage you to prepare for such a situation by looking in a mirror and repeating: "Resist Arrest -- THEN PAY WITH YOUR BLOOD!"

It might not be the cleanest solution, but it's the bloodiest, and if Dragon Age and Super Meat Boy have taught us anything, it's that he who is bloodiest scores highest.