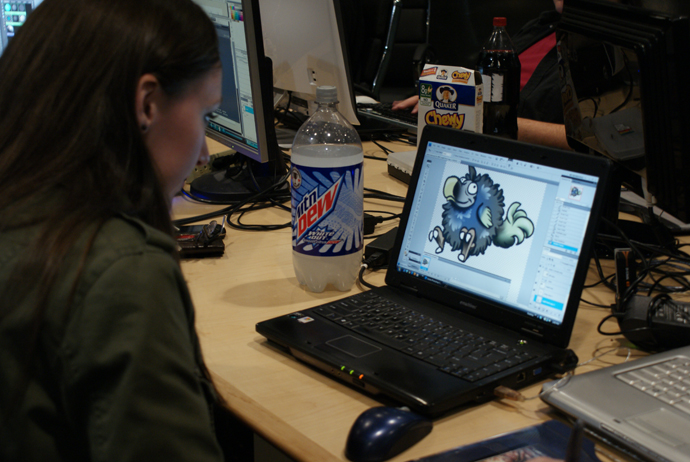 Thirty-some developers and a few emptied vending machines were the result of this past weekend's Global Game Jam in Durham, NC; aspiring game makers were given a time-limit of forty-eight hours to concept, program, and polish a game for a worldwide (over 6000 members total!) development bonanza. The result was an abundance of sleep-deprived, over-caffeinated, and dedicated coders and artists.

This year's theme was "Extinction," and the groups were left to their own devices to decide what that meant to them. At the surface, to me, it sounded like an animal rights support theme. The key word here is 'sounded.' After spending a few hours with different participating teams, the message was diluted by gratuitous amounts of guns, aliens, and Dodo guts. That makes a better game, anyway.

Yes. Dodos. The Dodo bird made its long awaited return at the Global Game Jam, only to be obliterated (hundreds of times over, mind you) by anvils and other Wile E. Coyote instruments. The group, who wished to remain anonymous to protect themselves from PETA, told me that the game's focus was to "Kill dodo birds. Lots of them. Like... hundreds." When I took a look at the prototype of the game (it was still in early development when I visited), it looked fast-paced and humorous. Dodo Destruction also had the most impressive art (above), and for a game made in forty-eight hours, I was thoroughly impressed.

Another group decided on Weekend of Mass Destruction (available here) for their game name, and sold me on the idea immediately; you're an alien who hasn't had a day off in 300 years, and he finally gets a weekend off. With enough nukes to end the cold war, he sets off to destroy planets as a vacation. Genius. I asked Travis Thompkins what the most fun part of the entire event was, "Talking smack to each other. You have to make it fun -- it's not supposed to be really serious." Considering the concrete floor they were sleeping on, it'd be hard not to have a sense of humor. 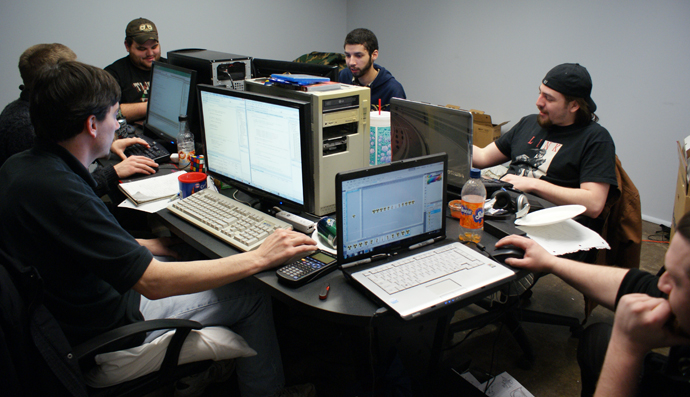 The entirety of the event was largely dedicated to the development and learning process -- it'll teach devs to crunch under pressure, produce a fun and lightweight idea, and then move on. "It's not a competition. As long as they're sharing," Michael Lee, the organizer of the Durham event told me. "People start with small games and expand from there. We've had some success stories where people continued developing their game after the jam." The attendees had the same idea, Alan Youngblood said: "It's a sharing environment. Everyone helps each other."

Despite the inherent carnage and hilarity surrounding a theme like "extinction," the jam is a perfect place for veteran and experienced developers to collaborate and, in the least, build up a resume and some experience. In only forty-eight hours, over 1000 games were submitted to the Global Game Jam repository. It is simply remarkable how much can be accomplished with enough dedication and caffeine. I can only imagine the strides that will be taken when cots and sleeping quarters are available. Michael summed it all up beautifully: "It doesn't matter how great the game is, or even if it's entirely functional. It matters that you made something with a group of people. It proves that these guys can work in the [games] industry."

The Game Jam takes place every year. Visit their website for registration information.