Ahh, Baldur's Gate: One of the most fantasy-filled, exploratory, role-playing-centric series of games ever to be made; there's nothing quite like venturing through the City of Athkatla for the first time - and very little can restore that feeling, except for maybe, just maybe, a 3D re-envisioning of Baldur's Gate 2. We were hoping for one with the Baldur's Gate: Enhanced Edition announcement, but got nothing close. In modders we trust.

Alas, it's been tried countless times before in countless 3D engines. The mods rise and fall to the wayside with each iterative step in RPG engine technology: We've seen them attempted in NWN, NWN2, even Oblivion, and now we're here - waiting for the Dragon Age engine remake of Baldur's Gate 2. It would appear, though, that for once, we have a foolhardy team that's capable of seeing their mod through to the finish. The difference - at least, this time - is that the Baldur's Gate 2 Redux team (affectionately shortened to BGR) has planned to release their total conversion mod in sequential modules, allowing fans to play the series one step at a time without having to wait for the entire project to be finished first. The first module was already released to great reception, and now we wait for the second, more promising part: The City of Athkatla. All of it.

I had the chance to sit down the Lorne "Cuv" Ledger, current organizer of the team's production, and take a look at what, exactly, we can expect for Module 2 of the remake. Our first interview can still be found here, but this one gets a bit more in-depth with the new release. 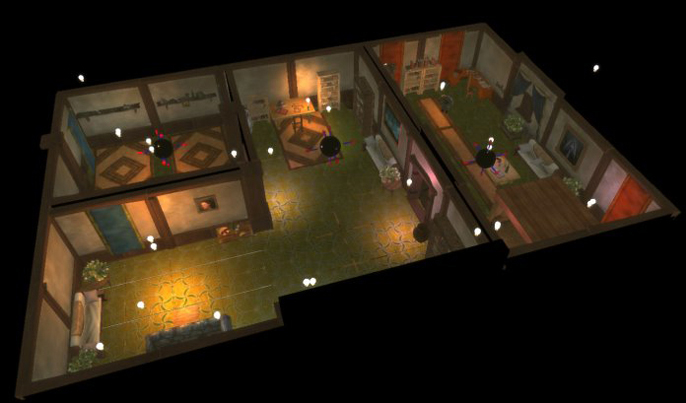 Gamers Nexus: How's progress on module 2? How are things looking?

Cuv: Things are looking great! The progress we are making is incredible, considering the actual time everyone has to contribute. We have roughly 30 times the content of the first module so far.

Cuv: We have currently over 100 brand new levels completed and final. Some items have been made, but there is more work to do on that front with quest items as the quests begin to take shape. All joinable NPCs are made and working. Some need minor tweaking, but their individual quests are beginning to take shape. Anomen, for example, has his knighthood and sister's death quests mostly in place. Creature models are at a standstill at the moment, with Ablaine [the modeler] pursuing a 'real' gaming job. 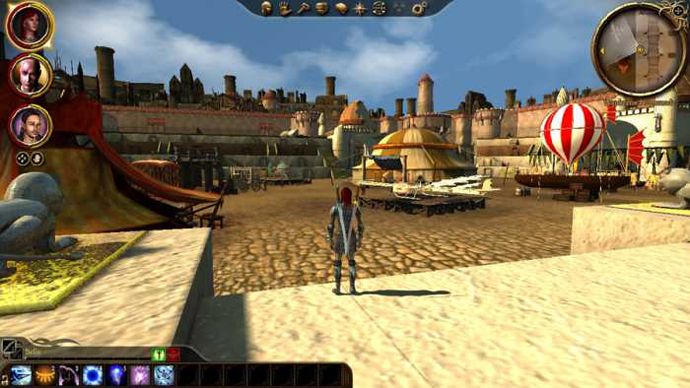 GN: It's definitely tough to juggle mods and real life, that's for sure. What are some of the major levels that fans of BG will appreciate a return of? Which sections of the game have had the most content put into them thus far?

Cuv: I would say the Slums District and Waukeens Promenade have had the most content added so far. The most difficult problem with the levels is that of the lightmapper, which has several problems. Chewy [the team's resident programmer] is still working on that. Terrain in small outdoor levels will lightmap, but not in huge District levels. The lightmapper is a shipped tool with the toolset, but it's not doing what it's supposed to all the time. Chewy's working on our own version of the tool.

The quest characters and life of the city are also beginning to take shape. 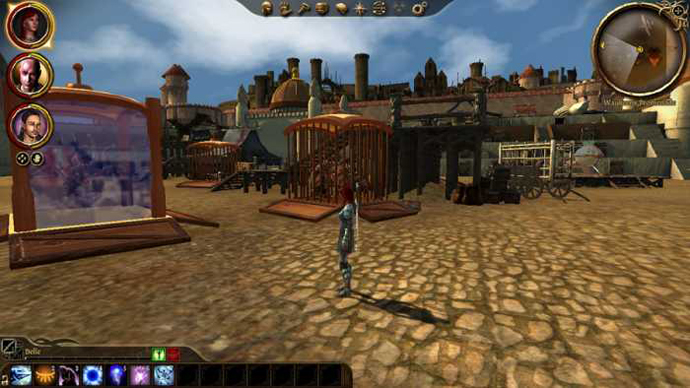 GN: Has the team implemented (or does it plan to implement) any mechanics changes? Will gameplay largely stay the same as what we know from Dragon Age: Origins?

Cuv: Yes, Sunjammer [a newer team member] has already implemented Day/Night map travel. The scripts will calculate the time of day and then load the appropriate version of the outdoor area. We plan to overhaul the spells and abilities. Whether that will actually happen before the release of module 2 is still in question. [Team member] Sunjammer is also fixing the entire trap system. He's going to implement the BG2 class/race/gender system into the module, as well. Work is still very early on that, but the XLS files are taking shape.

GN: How many modules are planned for release? What's the overall theme of Module 2?

Cuv: The theme for Module 2 is a simple one: The City of Athkatla. All of it!

The only exceptions will be a few of the quests within it where you would have to have visited the outside of the city first to complete them. For example: the Planar Sphere quest requires finding Valygar... and you can't find Valygar without visiting the Umar Hills, although the quest can still be started in Module 2. 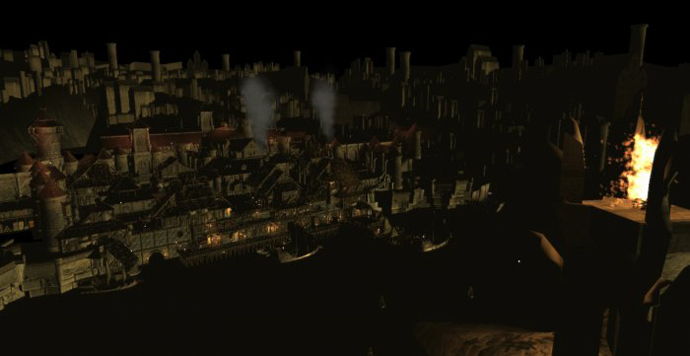 The night version of the main level.

GN: How's the quest integration been going so far? Any major roadblocks or things to overcome? Anything really cool and exciting?

Cuv: Each new quest reveals problems with the core DA engine where translation from the Infinity Engine [of BG2] is concerned. We've had to invent new systems. BG2 uses gold as the main currency, where DA uses copper, silver, and gold. We'll be using the BG2 system, but keeping the coppers and silvers. New plots and scripts will be needed to be made to give or take gold.

Class, race, and gender will be just as tough. Much of that is possibly hardcoded, we just don't know how much yet we can tweak within the Chargen. We are trying to implement new player races.

GN: Are you including every quest? Every conversation? Character? Even the really minor ones?

Cuv: As many as we can, yes! We may even try to restore the unfinished quests at some point, but those are a lower priority, as you can imagine. The city needs to feel alive, so all those conversations are necessary. We'll possibly even have some new filler conversations, but nothing so new that it angers fans. 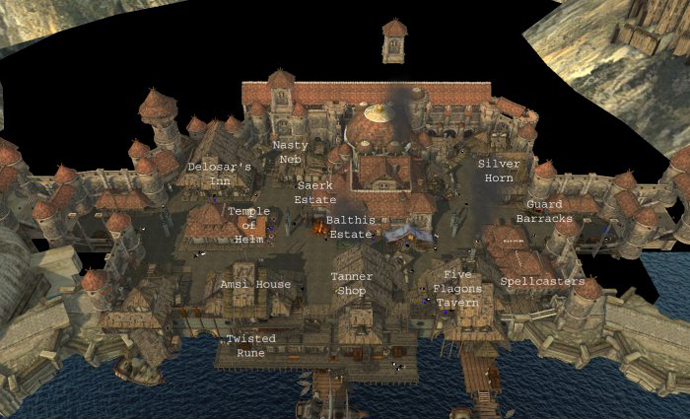 An overview of the Bridge District.

GN: I'd imagine you have two fan-bases to worry about: The hardcore/originalist fans and the newcomers who either can't stand the graphics of the original or are otherwise open to new content. Are you trying to appeal to everyone? Is there a specific audience?

Cuv: Good question... it's more for the original fans that want to relive [Baldur's Gate 2] in 3D, but we're working hard to make it accessible to new people, too. Of course, when we finish the whole game, the assets and toolset resources will be made publicly available so that other modders can mod BG2, except our mod.

GN: Wait - so you're sort of open-sourcing Baldur's Gate 2: Redux?

Cuv: What we have will be made available when the mod is done. Unfortunately, some assets were lost during my July [hard drive] crash, but we still have most of them. All levels were committed before the crash, though, so we didn't lose any levels. 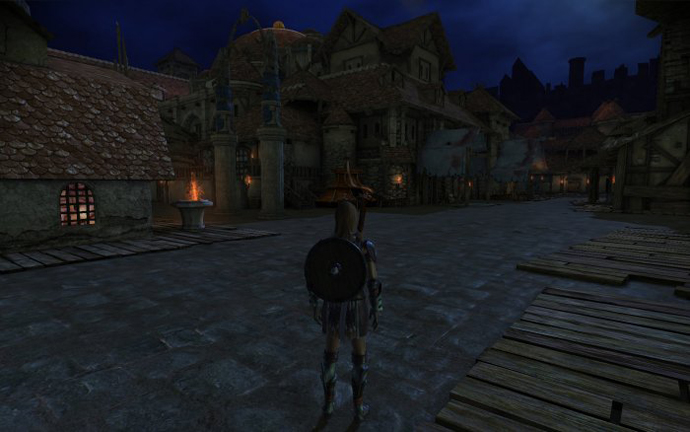 GN: Here's the obvious question -- I know people are going to be very interested to know what your response to the pending BG:EE launch is. Has anything changed? Any concerns or new directions? Advantages? Will it affect launch dates?

Cuv: Honestly, it won't affect us at all. We will continue with our direction. There is an advantage in the hype that was drummed up by it -- if we have a finished product to release around the same time they do, we'll do everything we can to match that date. This is a labor of love, though. We are not on a deadline, it'll be done when it's done.

GN: What are you personally most excited about with the pending module (or project as a whole)? What have you really -loved- working on the most?

Cuv: Levels. I get better at them every day. You can see the difference in my earlier levels compared to my later ones. Quests, too... it's exciting to see them start to take shape. 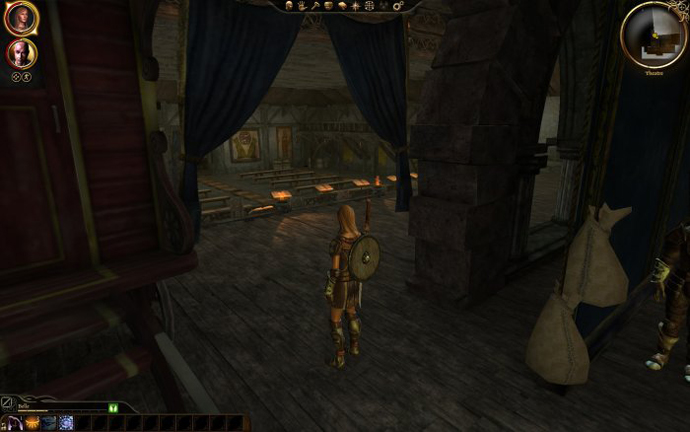 GN: What do you want to tell everyone about the mod - both newcomers and fans?

Cuv: Just the amount of content. I work about 50 hours per week on the mod -- before work, after work, and on my days off. We're trying to get a new video online soon, so we want everyone to follow us on Twitter and check our blog page every Sunday for updates (we post every single Sunday).

Impressive, right? I know I'm looking forward to the next module! Have questions or concerns about BG2Redux? Leave a comment below, we'll get 'em answered.