System Builder Personalities: What Type of Builder Are You?

Associating with system builder stereotypes and personality archetypes can be a fun (and slightly self-indulgent) way of classifying what you enjoy in the art of PC building. It's a big industry with a lot of room for customization, and with customization comes personal build styles and taste.

This is our list of builder archetypes -- you can be one or multiple, but in the end, you're a builder, and that's what counts. Leave us a comment below and tell us what you think you are! Similarly, if you think you're a unique builder type and we've missed you, tell us what it is!

These methodical builders are experts at slicing components in favor of cash, while still retaining the performance required; akin to the budget PC builds we post regularly, corner cutters will forgo an optical drive in favor of re-using an old one (or skipping it altogether), pass on 8GB of 1600MHz memory when they know 8GB of 1333MHz will do the same job with minimal performance difference, or even use an old case and apply generous doses of the hole saw to create new fan bays.

Corner Cutters often tend to associate with DIY ingenuity and/or a min-max approach to building, honing their technical abilities in an effort to keep the costs of a new build outstandingly low. 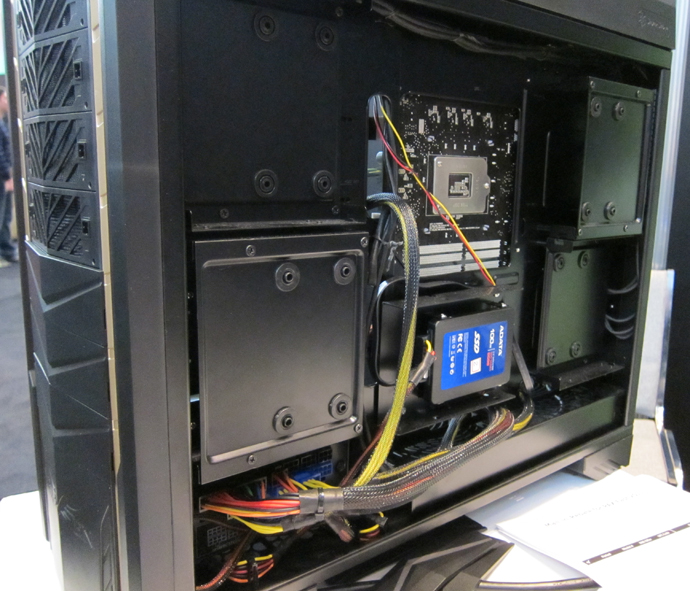 Some call them insane - their ramblings echoing throughout case manufacturing factories at night - others call them neat freaks; they are, no matter what they're called, cable whisperers. These wiring rascals go out of their way to twist, tie, and stuff cables into the blackened crevices and channels of even the least optimized of cases; cable management is of paramount importance to the Cable Whisperer, often resulting in many attempts to wire- and re-wire a case in effort to achieve maximum cleanliness and minimize dust accumulation.

Cable Whisperers tend to stand alone - preaching the disciplines of cable management to all who post images of sloppy wiring. They appreciate the performance, look, and neatness that properly managed cables result in.

Controllers of weather (well, wind, anyway), masters of freeze, dominators of thermals -- Cooling Wizards embrace their gift to command the interior temperature of their systems. They're the first to recommend aftermarket heatsinks, explain how fan cooling works, opt for liquid cooling solutions, and utilize fan speed controllers. Cooling Wizards do their best to keep airflow unobstructed and aim only to sustain the coolest operating temperatures while outputting maximum performance.

Going out of their way to soup-up their PCs by any means necessary, LED Orchestrators start small - often with a case that has a few LEDs - and eventually are consumed by their desire to install more lights; once they run out of LED options in the fan department, they move to cold cathodes, front control panels, LED controllers, and more. Why? Because it looks cool. That's why. LED Orchestrators are all about installing as much flair as possible in the most controlled, cool-looking way possible. The look has to have purpose.

LED Orchestrators tend to be at odds with The Ninja.

Creeping around in the night, weapons drawn and ready, the Ninja's computer hums quietly and sits unassumingly when playing games. With a sleek exterior and no lighting or flashiness to be found, the Ninja's computer could easily be mistaken for a weak office computer by the unpracticed observer, but in reality, it's a sleeping giant, prepared to take on any game. The Ninja looks for discrete cases that are capably equipped but otherwise undistinguishable from every-day systems.

Why not go with the hyperthreaded 6-core enthusiast-grade CPU? It's only a little more than the 2500k, right? A few hundred bucks never hurt anyone. Enthusiasts put components above all else, hoping only to try out the latest-and-greatest technology on the market; they're building for hobby, fun, and technological curiosity. It's an admirable (and expensive) sport to make a hobby of -- system building is as much of a lifestyle for these builders as it is a measure of technical prowess and power.

And then of course, there are the practical builders. Not every system needs to be flashy, or discrete, or look as if its cables were managed by Talos himself, but they do need to be functional. A build that can game capably and will last for at least a few years is all that really matters; if the performance difference between a $300 video card and $500 video card is almost unnoticeable, then the cheaper one seems to make more sense. Practical Builders never get more than they need, but they get just enough (maybe a little more, in the case of RAM) to do what they want the system to do.

Which builder personality/stereotype are you? Tell us below! If you think you're a special flower, comment and tell us what build personality you think we should add.