In continuing our Haswell coverage (following up from our "is Haswell worth it for gaming?" post), today we visit the topic of the CPU's most intimate counterpart: the Chipset. As more of you begin to evaluate the place for 4th Gen Intel components in your upcoming PC builds, it's important to understand the various chipsets and their inherent use case scenarios. If you're brand new to all of this and aren't even 100% sure what a chipset is, check out this previous article: "What is a Chipset, Anyway?"

Intel's previous generational tick (IvyBridge), known as the 3rd Gen Intel Cores, operated on the LGA1155 socket with 7-series chipsets. You're all familiar with Z77, Z75, and H77 chipsets at this point, but with the Haswell drop comes the 8-series ("Lynx Point") of chipsets -- and Intel has made a good deal of changes, especially for power and voltage regulation.

In this article, we'll compare Intel's Z87, H87, and H81 Haswell chipsets, talk about the differences, and evaluate what you need for your machine. Let's talk about the major differences between Intel's new family members.

Before looking specifically at the new chipsets, I wanted to give a quick overview of Intel's chipset naming scheme. This should aid you in future searches.

X- Prefixes: "Enthusiast" Class. This is the big money. X58 took the world by storm with the First Gen i7 chip -- Nehalem -- and has since been followed-up with great success. We're still on SB-E (Sandy Bridge-E) in enthusiast-class computing, which operates on X79 chipset (shown below), though IB-E is due out in ~September. 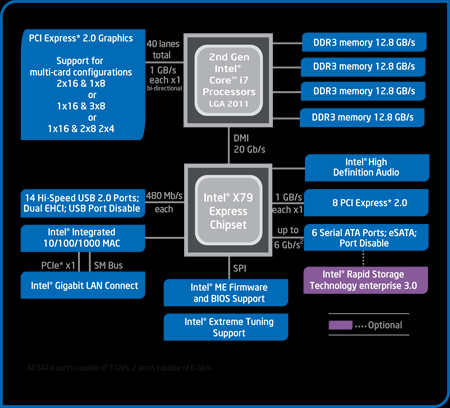 Z- or P- Prefixes: "Performance" Class. Although the P- series is now deprecated, Z- and P-prefixed chipsets are Intel's branding for "performance computing." This is what overclockers and not-quite-enthusiast-class enthusiasts opt for, making most of its demographic dedicated to gamers with an interest in OCing. The performance-series chipsets also make for great render/encoding machines, for those producing YouTube videos or other home footage with some regularity.

H- Prefixes: "Mainstream" computing. The H-series of chipsets is dedicated to non-K SKU CPUs, so it feels most at home when in an HTPC or other "living room" type of computer. Overclockers and enthusiasts should stick to Z and above, but anyone building a pure gaming machine with no interest to overclock at all (and no interest in multi-GPU arrays) should seriously consider H-class chipsets. We'll talk more about why below.

Q- or B- Prefixes: These are for biz-client users. Q-prefixed chips offer options for those working in professional environments that require specific features -- like identity protection -- while B-prefixed options are more budget-friendly, slimmed-down versions.

It's not any secret that Intel's been pushing the power saving spiel for a while now; they want Ultrabooks to be "a thing," and by producing CPUs and chipsets that can optimize for low power consumption and low-draw idle states, battery life can be extended many times over. This also lays the groundwork for a long-term plan to command a foothold in the mobile computing space, which Intel has historically failed to enter (under the shadow of ARM). Though if anyone's going to make waves in a strategic, long-term fashion, it's Intel; they've got the market cap, the R&D, and the patience. Haswell is just the first step toward the technology that SoCs need to be using to perform well without murdering the battery forthright.

Some of these power advancements include a focus on new "stuttered" sleep states (S0iX) that allow the CPU to enter a near-slumber state when an active user does not demand the CPU's immediate attention (the CPU is idle; the user is active). The CPU stutters its power draw in this regard, but can return to functionality within 1ms. Similar advancements include SSDs getting DevSleep, which is a new power-saving feature that effectively puts the SSD to sleep whenever it's not being used, but resumes full operation within 250ms. 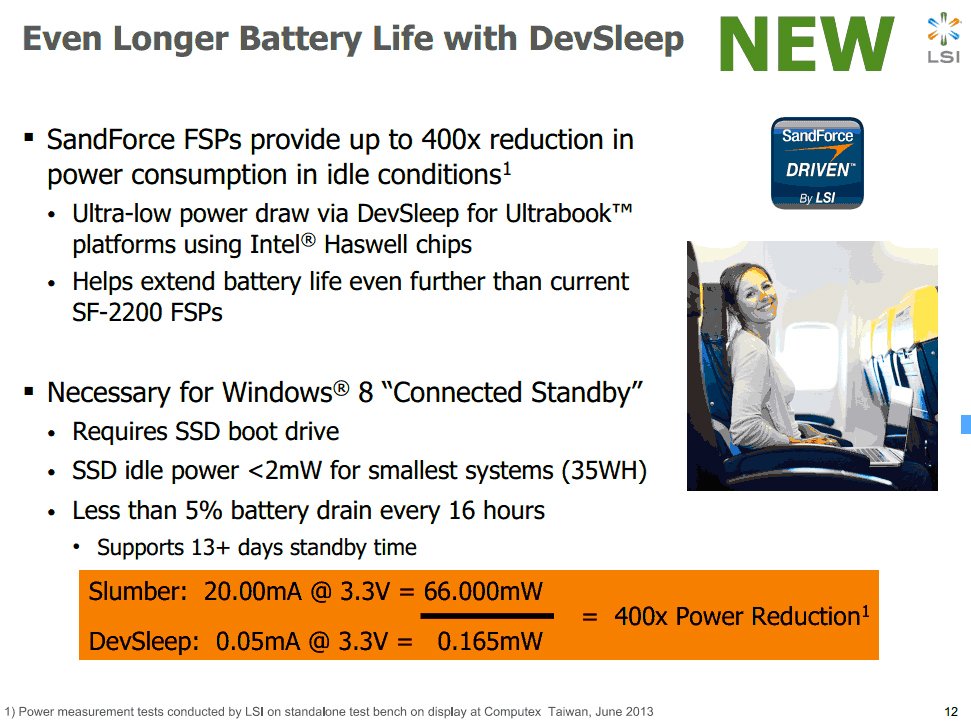 LSI's presentation and their explanation of DevSleep's low power draw.

As far as we're concerned -- meaning the desktop/enthusiast audience we write for -- this isn't all that important for our gaming rigs. It's impressive, it's good for energy conservation, but it's frankly not what you'd care about in a gaming rig. For gamers and hardware enthusiasts, we're mostly concerned with the new way the VRM is handled (which impacts overclocking), the increased memory bandwidth and XMP support, multi-GPU compatibility, and other similar "high-end" features.

For years now, Intel's been actively taking away functions from the motherboard and moving them to the CPU. There are a lot of reasons for this, but performance is the least debatable: Moving functions off the board reduces, among other things, latencies when interacting with those devices. It also means Intel can optimize for the component (see: the memory controller) and increase overall efficiency measurably, given their exact understanding of how that now-integrated component works.

Of course, the business-side of this is that it puts Intel in a stronger position of power, giving them more dictation over individual parts and reducing the importance of board manufacturers (perhaps paving the way for BGA devices). Intel has even begun suggesting alternative components and microcontrollers for mobile computing devices -- if they think there's a better component that's more power- or latency-friendly, they'll suggest the change.

The intentions are debatable, but the performance gains are not; consolidation of the bridges to create the PCH is another example of recent performance boosts, and that's gone over well.

But we're more concerned with the actual chipset, which is decreasing in its overall functionality with each generational advancement of the CPUs (as things move to the actual CPU die).

For starters, the Lynx Point (8-series) chipsets have moved entirely to SATA III (6Gbps) for its data interface. They've also moved to offer more native USB3.0 connectivity (despite S3/S4 resume concerns), making Lynx Point one of the most supportive chipsets of high-speed and Advanced I/O yet.

Z87: Intel's new spin on their performance-class Z-series chipset, Z87, is what you'll want for any overclocking or hardware enthusiast endeavors. When purchasing a K-SKU CPU with unlocked overclocking potential (including BCLK and multiplier modifications), it's important to get a Z87 chipset to go with that; Z87 is currently the only LGA1150 chipset that grants the user full control over BCLK (insofar as it can be controlled, anyway), voltage, and multiplier settings. As a bonus, Haswell's amped-up memory support means higher DRAM frequency OCs are now possible on Z87, up to nearly 3GHz. You're still limited to 4xDIMMs due to the chipset's memory channel configuration, though it's not like any consumer is going to need more than 32/64 configurations. 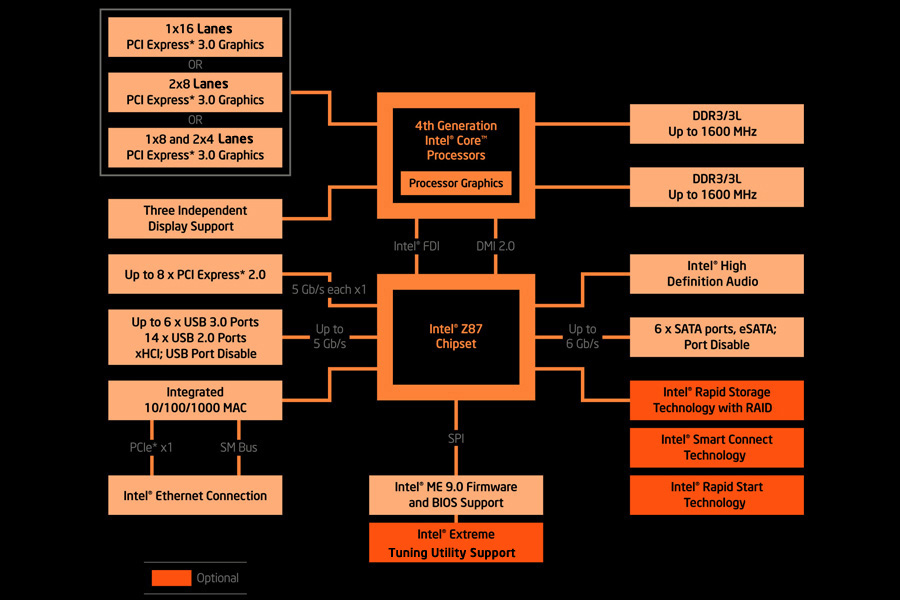 Further on the gaming and enthusiast front, Z87 allocates the most PCI-e lanes for expansion devices, allowing x16, x8/x8, or x8/x4/x4 SLI/CrossFire arrays. Of course, SLI/CrossFire will be throttled by the slowest device in the chain, so if you're using x8/x4/x4, the speeds will be limited to x4 speeds. That stated, running modern GPUs (as of this writing) on PCI-e 3.0 (or 2.x) x4 interfaces should result in hardly noticeable throttling, when compared to the gains awarded from tri-SLI.

Speaking of PCI-e 3.0, Haswell runs its 16 PCI-e 3.0 lanes from the CPU (rather than using a high-speed bridge, like the old North Bridge) and the additional PCI-e 2.x lanes from the chipset; Z87 offers 8xPCI-e 2.0 lanes in addition to the native 16 lanes from Haswell and has extended multi-GPU array support, the amalgamation of which results in our high-speed dual- and tri-SLI compatibility.

We're already getting the "do I need a Z87 motherboard?" question on the forums, so I'll try to answer it here: The short answer is "it depends." If you're overclocking or have a particular passion for playing with hardware, then yes, get Z87 and a K-SKU CPU. If you could care less about overclocking, don't need tri-SLI/CrossFire, and just want to play games (without playing with BIOS), then get a non-K CPU and one of the below two chipsets (probably H87).

H87: Unlike Z87, H87 is fairly locked-down. You lose advanced overclocking functionality for the CPU and memory, SSD power optimization (not very relevant for desktops, if we're honest), and drop down to x16 or x8/x8 video configurations. As far as desktop users and gamers are concerned, everything else is effectively the same. If you really couldn't care for overclocking and don't need more than one or two video cards, then grab H87 and save some cash. Some H87 boards are slimmed-down in other aspects, of course, like overall build quality (cheaper materials, worse heatsinks, fewer I/O options), but shop carefully and it's the best bet for non-K CPUs. 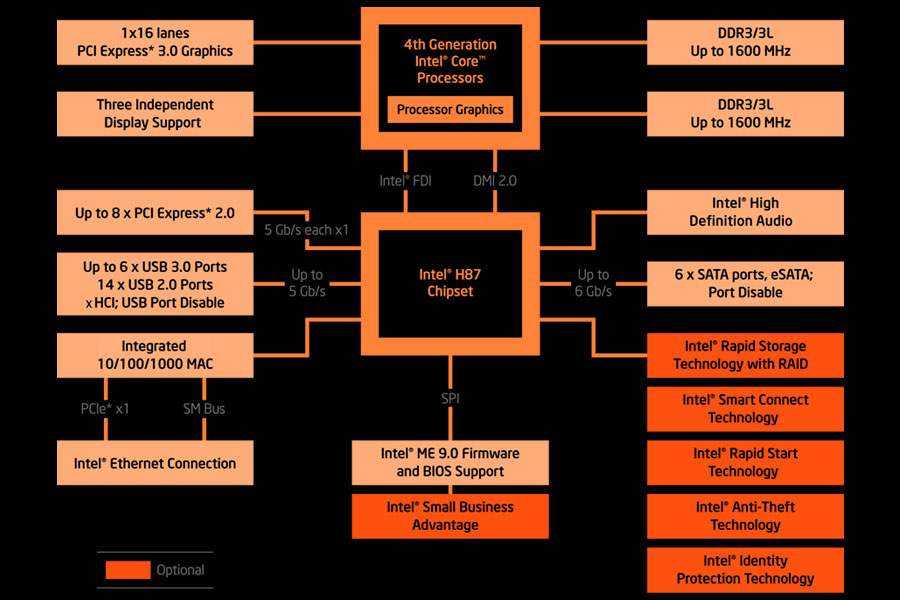 H81: As with H61 and other HX1 predecessors, H81 is most at home in "living room PCs" and use-focused HTPCs. You lose all advanced storage functionality, drop 2 of the SATA ports, drop to a single x16 PCI-e slot, lose 2xPCI-e 2.0 lanes, and lose one DIMM per channel (meaning you're restricted to 2 memory slots). There's no overclocking support and BIOS is effectively relegated to controlling your boot devices, seeing as there's not much else to do in there.

We generally push users toward the H87 and Z87 chipsets for their higher build quality -- even if you're never going to have more than 2 sticks of RAM, 1 VGA, and 4 SATA devices, motherboard manufacturers generally cheap-out on the consumer-class products (HX1). I personally feel much more comfortable recommending H87 over H81, even if you're saving $10 or $20.

H81 has its place, it's just not for the average reader of this site -- mid-range- and high-end-equipped gamers.

Value and Conclusion: What Chipset is Right for My Build?

I've already stated this throughout the above text, but we can simplify things pretty heavily:

And with that, I'll open the floor to questions. Post a comment below if you need any help, alternatively, post on our forums for in-depth support from our experts.