AMD's Kaveri APU has been out for a while now. As the FM2+ platform has stabilized post-APU launches, we're seeing increased adoption of APU-based budget rigs among our PC build guide readers. Kaveri and Richland are both interesting chips from an architectural standpoint; Kaveri has increased the die allocation of the GPU component to nearly 50%, resulting in one of the most powerful consumer-ready integrated GPUs ever available, yet still retains performance right around (or under) Richland in CPU power.

As with any growing platform, AMD's chipset selection has expanded on FM2+ as technology has iterated; the company currently pushes A88X, A78, and A55 chipsets on most FM2+ motherboards found online; A85X and A75 are still around, but limited to FM1/FM2 boards. A88X was just getting big around CES, where we demoed some of the first A88X boards at MSI's suite. Still, AMD doesn't have its block diagrams easily accessible and doesn't make it easy to learn the differences between each chipset, so that's why this article is here.

In this AMD FM2+ / Kaveri APU chipset comparison, we'll look at the differences between A88X, A85X (FM2, Richland), A78, A75 (FM2, Richland), and A55, then discuss what's best for your gaming needs. AMD A75 and A55 have been around since FM1, A88X came out with Kaveri, and the rest are in between. If you're interested in a similar post about Intel's 8-series Haswell chipsets, check this out.

AMD's naming convention is refreshingly straight-forward when compared to what companies like ASUS do. Strictly looking at the APUs, you'll notice that the options are all prefixed with A#-. A4, A6, A8, and A10 are available product prefixes. All of AMD's CPU branding begins with the line (FX, A); the A is indicative of the fact that this is an APU and carries no weight beyond that.

The number immediately following the A- designator tells us the target usage: A4 and A6 are meant for mainstream, office, and environments that demand more energy efficiency; they're also dual-core processors and lack the higher-end graphics components found in the "gaming" products. AMD recommends coupling the A4 and A6 APUs with an A55 chipset, with some A6 overlap in the A7X series chipsets. A8 and A10 are more gaming-focused, as evidenced by a move to quad-core CPUs and more powerful IGPs.

As for the numbers after the dash (A10-####), those are pretty easy. The first number marks the generation of the product (not necessarily always linear), with the 7- series being the most recent Kaveri APUs, 6- being Richland, and 5- being Trinity. The second number tells us the base clock speed relative to the other chips; AMD hasn't explained precisely what this number represents in its literal embodiment, but we do know it's to do with relative clock speed. You'll often see a "K" suffix for the APUs we recommend (like the A10-7850K). As with Intel, this is a guideline to tell purchasers that the APU is better enabled for overclocking and enthusiast gaming endeavors.

These are old images from the FM2 launch that AMD thought would help buyers:

Moving to the FM platform has been a refreshing change from AM3, which dates back to 2009 and 2011 for its AM3+ refresh. The FM2 chipsets have full USB3.0 support natively built into the board (doesn't require an aftermarket chip from the board manufacturer) and are overall a more modern platform.

Still, the FM line is a bit nebulous in its compatibility with chips and chipsets due to the wide reach of each socket. For instance, Kaveri is only supported on A55, A78, and A88X (ascending order), while A75 and A85X are targeted at and Trinity. There is overlap between A55 and the Kaveri chipsets with , though, and that can make things difficult to follow. This table will make it a bit easier to understand:

Before jumping into the longer-form version of the differences, here's the short-form table:

Let's just go through these one at a time, top-down. 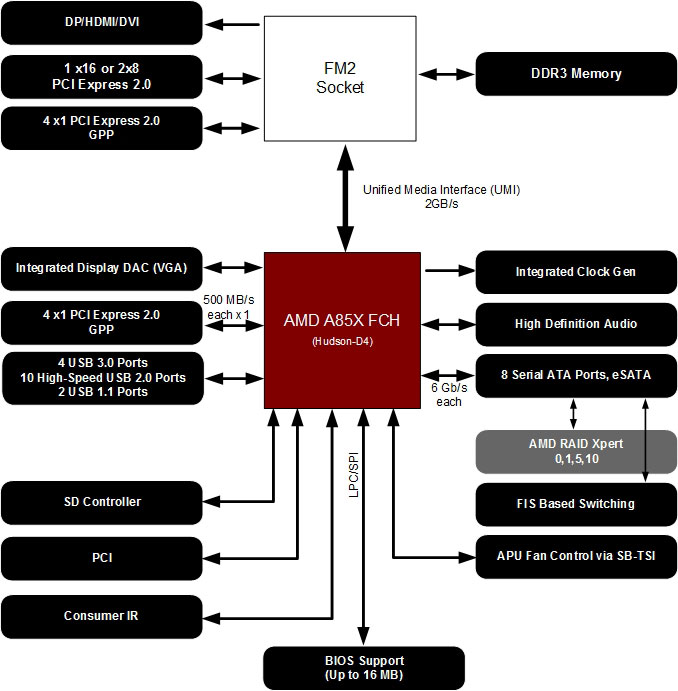 A88X is largely the same.

AMD introduced A88X as a chipset option at CES right before the Kaveri announcements were put out. A88X effectively has identical architecture to A85X, with the key difference being FM2+ support and the AHCI & RAID controller in A88X, which is slightly upgraded over A85X. Some extreme overclockers have reported difficulties with high BCLK overclocks on the A88X chipset due to the AHCI controller locking BCLK to 106MHz (vs. the 140MHz of A85X), but users who don't push their hardware that hard will enjoy the quality found in modern FM2+ A88X motherboards. The overall quality hike in components (VRM, heatsinks, caps) that often correlates with A88X will be worthwhile unless this very specific BCLK limitation is relevant to your needs (and you'd know if it is). The only time a buyer should consider the choice between A85X and A88X is when attempting to place a Richland APU, as Kaveri is not supported on A85X.

A88X on the FM2+ platform will support PCI-e Gen3 slots when coupled with a Kaveri processor, but only when paired with Kaveri; although is supported on A88X, it will not make use of PCI-e Gen3 capabilities and will instead revert to Gen2. PCI-e lane allocation is the same on A88X as it is on A85X: 1x16 or 2x8 can be configured, so two GPUs is the best you'll do.

This is still largely irrelevant for most modern cards as they won't produce the throughput necessary to be bottlenecked by Gen2.

Key Differences: A88X and A85X are each the top of the line for their respective platforms. They're not meant as direct competitors, so you're basically either choosing A85X or A88X based on whether you're using or Kaveri (respectively). Other than that, A88X has added full PCI-e Gen3 support when used with Kaveri and has the upgraded AHCI/RAID controller, but that's about it for differences.

A78 is another FM2+ exclusive chipset and is a sort-of mix between A55 and A75 of the previous generations. A78 supports only PCI-e Gen2 (regardless of APU) with 16 lanes available for PCI-e device allocation; this is fine for a single-GPU setup and is probably where you'd be using an A78 board anyway, but you'd want something with more lanes for additional PCI-e devices (like SSDs). Dual GPU configurations are not supported by the chipset.

Native I/O support hosts 6xSATA III 6Gbps ports, 4xUSB3.0, 10xUSB2.0, and 2xUSB1.1 ports with RAID 0, 1, 5, and 10 support. This chipset is really targeted at users who don't need the extended PCI-e capabilities of A88X; keep in mind that dropping a chipset class to A78 will often correlate with an overall drop of component quality, so the VRM, its heatsinks, and other board components may be down-classed a bit between A88X and A78. This stated, it's for a reason: You won't need as much power and tolerance for thermals on an A78 board since it's meant for more mainstream-targeted chips and users who aren't serious about OCing or multi-GPU configurations.

Key Differences: Between A88X and A78 -- both FM2+ chipsets, so we're assuming you're on Kaveri here -- the key difference is in its overall target use case scenario. A78 is meant more for users who will be sticking in the APU and leaving it alone (minimal OCing or tweaking) and will not make use of more than a single GPU, if that.

This one has been around for a while, but AMD keeps revamping it for continued use in modern boards. A55 was introduced on FM1, continued into FM2, and is now an option on budget FM2+ motherboards. A55 is strictly targeted at low-power, mainstream, and office uses, and really isn't that great for gamers and is a total non-option for enthusiasts.

Starting with PCI-e spec as we did above, A55 is PCI-e Gen2 only with 16 lanes available for a single PCI-e device. No multi-GPU support is available.

I/O lacks SATA III support unless the board manufacturer has elected to install an aftermarket controller. The chipset natively allows for 6xSATA II 3Gbps ports alongside 0xUSB3.0, 14xUSB2.0, and 2xUSB1.1 ports. RAID options are limited to 0, 1, and 10. TDP is marginally lower than the other chipsets (7.6W instead of 7.8W).

Key Differences: Of all the Kaveri-compatible chipsets thus far, this one really is reserved for ultra-budget builds with very limited uses. A55 boards are easily the most affordable, but you won't be putting them through any enthusiast endeavors or throwing multiple cards in there. 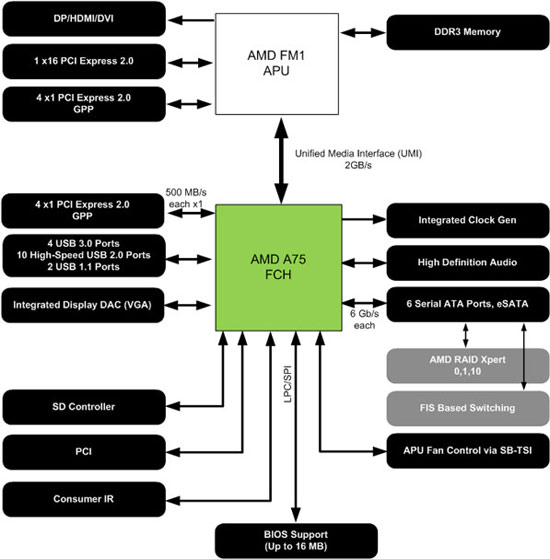 And now we're entering FM1/FM2 chipsets, so they're going to be a bit older and incompatible with Kaveri. It's still important to understand the options for any purchasers, though.

That's about it. Pretty straight-forward, this one.

Key Differences: Not compatible with Kaveri. The mid-range option for users (and lower).

Value and Conclusion: What Chipset is Right for My Build?

The above information has pretty clearly outlined where we think each chipset will see its biggest advantages, but to recap and simplify the information:

Hope that helps! As always, if you have questions for us, post 'em below or (preferably, they'll be spotted quicker) on our free hardware support forums.