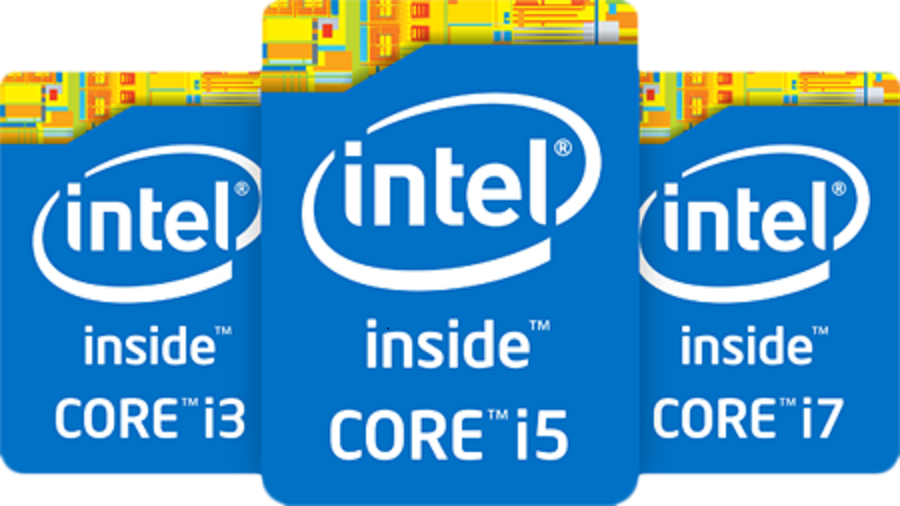 Intel has started acting a bit strangely as a result of its uncontested dominance in the mid-to-high-end marketplace; as discussed in our Z97 vs. H97 chipset comparison, this is the first Intel platform in recent memory that has expanded compatibility between CPU and chipset generations. Haswell, the Haswell Refresh, Devil's Canyon, and Broadwell are all LGA1150 socketed chips, and although there will be some incompatible 8/9-series board/CPU combos (check before buying), a lot of these will work together.

Devil's Canyon (detailed here) is yet unreleased and Broadwell still looms on the 4Q14/1Q15 horizon. Intel has released its "Haswell Refresh" CPUs in the interim, including the new i7-4790, i5-4690, and i3-4360; the CPUs are effectively replacing the i7-4771, the i5-4670, and the i3-4340 respectively. Astute readers will notice that the refreshed CPUs are each xx2x higher in number count than their championed component.

In this Intel CPU buyer's guide, we'll look at whether the Haswell Refresh CPUs are worth buying for gamers given their unique positioning between HW, Devil's Canyon, and Broadwell. We'll also talk about overclocking options and lack thereof on the i7-4790, i5-4690, and i3-4360.

Intel hasn't changed their naming convention for the Haswell refresh of CPUs, so if you're already familiar with this, go ahead and skip to the next section.

As with the current Haswell gen of CPUs, we've got i7, i5, and i3 prefixes; i7 CPUs are Intel's top-of-the-line CPUs for the mainstream or entry-level workstation user. The quad-core i7 CPUs utilize Intel's proprietary hyperthreading technology, introduced to the mainstream with the Pentium 4, which effectively means each core produces two threads for applications to use. This has historically yielded zero performance enhancement for gaming use case scenarios (and actually produces a slight, barely measurable overhead), but sees advantages in encoding and heavily multithreaded applications. The i5 CPUs are a sturdy middle-ground and often see use in our mid-range and high-end gaming PC guides. i5 CPUs are excellent value for gamers with a budget that allows Intel over the nearest AMD options; the i5 line is all quad-core without hyperthreading, so you've got 4 cores and 4 threads (4C/4T). On the side of i3 CPUs, we enter hyperthreaded dual-core land (2C/4T) with a stricter focus on office and mainstream use. The i3 CPUs are more affordable than the i5 and i7 counterparts, but we tend to recommend similarly-priced AMD components for gaming when buying in that price-range.

Suffixes are also pretty easy. The one we normally see is a "K," as in K-SKU, and is representative of an unlocked processor for overclocking. We often recommend that gamers with an interest in overclocking purchase the K-SKU CPUs, but push gamers uninterested in overclocking toward their non-suffixed counterparts. M and Q suffixes also exist, but are more reserved for mobile and business implementations.

Haswell as we Know It: The Refresh and the Devil

The current generation of Haswell processors came out in mid-2013, but we've known of the existence of Broadwell and the X99 platform for a while now. X99 will be an Extreme Series replacement for Ivy Bridge-E, named Haswell-E in its present state. More recently, we've been surprised with rumors of the (now-released) "Haswell Refresh," which GamersNexus initially speculated would coincide with the Devil's Canyon launch (read: I thought they'd be the same thing). That turned out to be incorrect, and as time drew on, we learned that the Haswell Refresh and Devil's Canyon CPUs would be released in succession, each leading into the X99 and Broadwell launches. 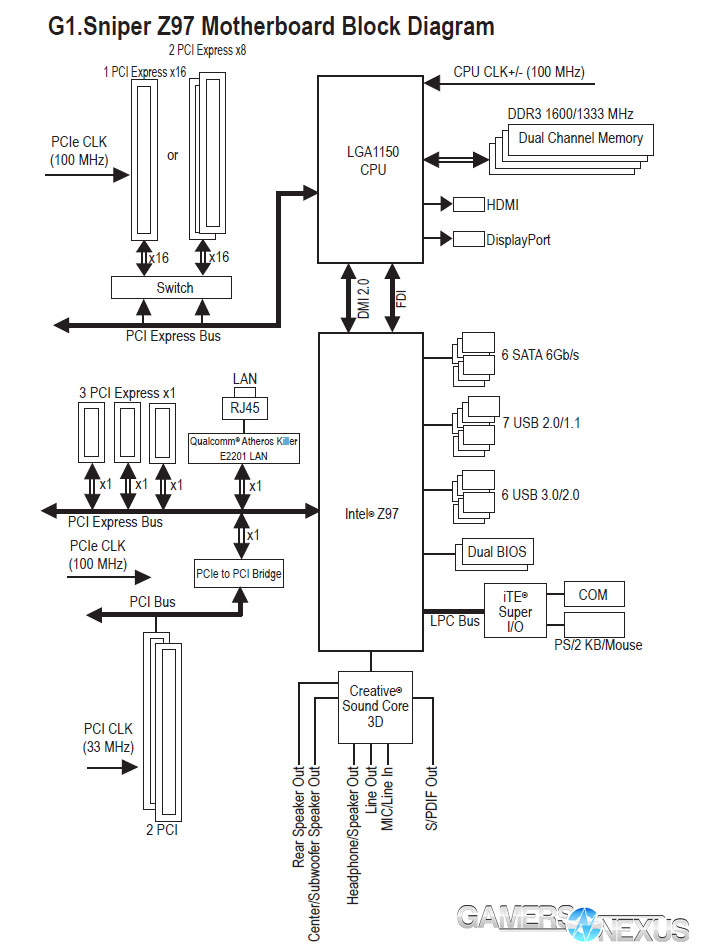 Z97 block diagram from a Gigabyte board.

Neither the Haswell Refresh nor Devil's Canyon CPUs exhibit significant changes architecturally, though both see compatibility on 9-series motherboards. The TDP of Haswell Refresh remains the same as Haswell; Devil's Canyon TDP is yet unknown, but we suspect very small changes if any are present at all -- the package has not had substantial changes, from what Intel tells me. At the GDC Devil's Canyon press conference (which we filmed), we asked about overclocking and TIM concerns on Haswell and if those would be addressed in Devil's Canyon. Intel told us not to get hopes up about some sort of extreme overclocking platform, then refused to comment further on TIM and thermal topics. They did note that it'd be targeted at enthusiasts and gamers, but we've yet to hear to what degree this is true.

And then we're left wondering why both Haswell Refresh and Devil's Canyon -- outside of marketing -- are necessary in the marketplace. A quick look tells us that Haswell Refresh does not contain 4770K or 4670K replacements (and actually has no K-SKUs whatsoever); Devil's Canyon will assuredly offer platforms in the K- or X- families and will potentially champion the 4770K and 4670K. In this regard, Haswell Refresh is more targeted at the mainstream, non-overclocking gamers, where DC will serve as an enthusiast stepping stone before Broadwell.

And now we ask the question.

Is Haswell Refresh Worth It for Gaming?

In the first scenario, I'd tell you -- judging by the public benchmarks we're referencing -- that an upgrade from Haswell or strictly for gaming purposes would go entirely unrewarded. This is doubly true in the instance of , where you'd have to buy a new motherboard to go with the purchase. Gamers will see immeasurable gains in the Haswell Refresh CPUs when compared against their existing predecessors. There's a slightly different story when we consider the IGP on the i3 chip, but that falls outside of what we recommend for gaming PCs.

As for owners of systems, it gets a bit more open to debate; users of the 2500K are still in a comfortable position with gaming as long as the video card is relatively high-powered. I'd hold off until either Devil's Canyon or Broadwell for an upgrade if I were on the 2500K. Quite honestly, even Nehalem still performs incredibly well (one of my gaming systems uses an i7-930) when coupled with a modern video card. It's just not worth an upgrade if all you're doing is gaming. I'm speaking under the strict consideration that an SB user would be considering an upgrade to an equivalent or better Haswell Refresh (HWR) chip; upgrading from an i3- or low-end SB chip to a high-end/enthusiast HWR chip would be more worthwhile, at least if you couldn't wait until Devil's Canyon or Broadwell. Going to Broadwell from SB would be something worth evaluating when the time comes.

For those looking to build a brand new system, there's absolutely no reason you'd stick with the predecessor to the respective HWR CPUs. There's still something to be said about buying a 4670K or 4770K for those looking to do a bit more with overclocking and customization, since the HWR chips don't really support overclocking to any noteworthy degree; if you're looking between the 4690 and 4670K, it's time to evaluate how much room to play you'd like to have when it comes to OC and BIOS-controlled settings. If the answer is "I don't care" or "I have little interest beyond tinkering," then the 4690 will do better for you. If the answer is "I'd like to overclock" or "I am somewhat serious about overclocking, despite Haswell's known thermal limitations," then go with the 4670K.

And then there are users who either play around with professional applications or are working as professionals while doing some gaming. Anyone working with photo manipulation, heavy-duty file compression, video encoding, and rendering tasks would be wise to consider an upgrade to the HWR CPUs (especially the 4690 and 4790) if running on Ivy Bridge chips or older. I'd still advise you to wait a bit and see what happens with Devil's Canyon over the course of the next 1-2 months, but if an upgrade is needed now, it's really not a bad option to go with the 4790 over even a 4770K when leaving the 4770K stock; in fact, the 4790 sees significant performance gains in photo editing tasks. The 4790 performs roughly 9% faster than the 4770K when executing build mesh operations, a 9.5% gain in WinRAR compression, and a 12.3% gain in HandBrake 2x4K framerate. These numbers can be pretty huge when you're making a living doing this type of action on a daily basis. They're much less noteworthy for the YouTube gaming hobbyist. Keep in mind that this is with a stock 4770K. If you're comfortable overclocking, the 4770K could be clocked to likely outperform the 4790.

The short of it: Haswell Refresh chips aren't anything to break the bank over. They're small, notewrothy advancements if you're on an 8-series chipset (or 9-series) and unhappy with your current low-end HW CPU, but I wouldn't call home about the gains. The story changes a bit for professional applications dealing in photo and video manipulation, at which point I'd seriously consider an upgrade if my income depended on efficiency at a reasonable price-point.