How is an SSD Made?

Just to give an understanding of where your SSDs come from, this video shows a previous tour of Kingston's SMT line (surface-mount technology):

What an SSD is Made Of -- Simplified SSD Architecture

SSD anatomy is more involved than mechanical storage on an electrical level, but isn't too terribly complex when it comes to the inventory of components found within each drive. The most noteworthy items of SSD composition can be broken down as: 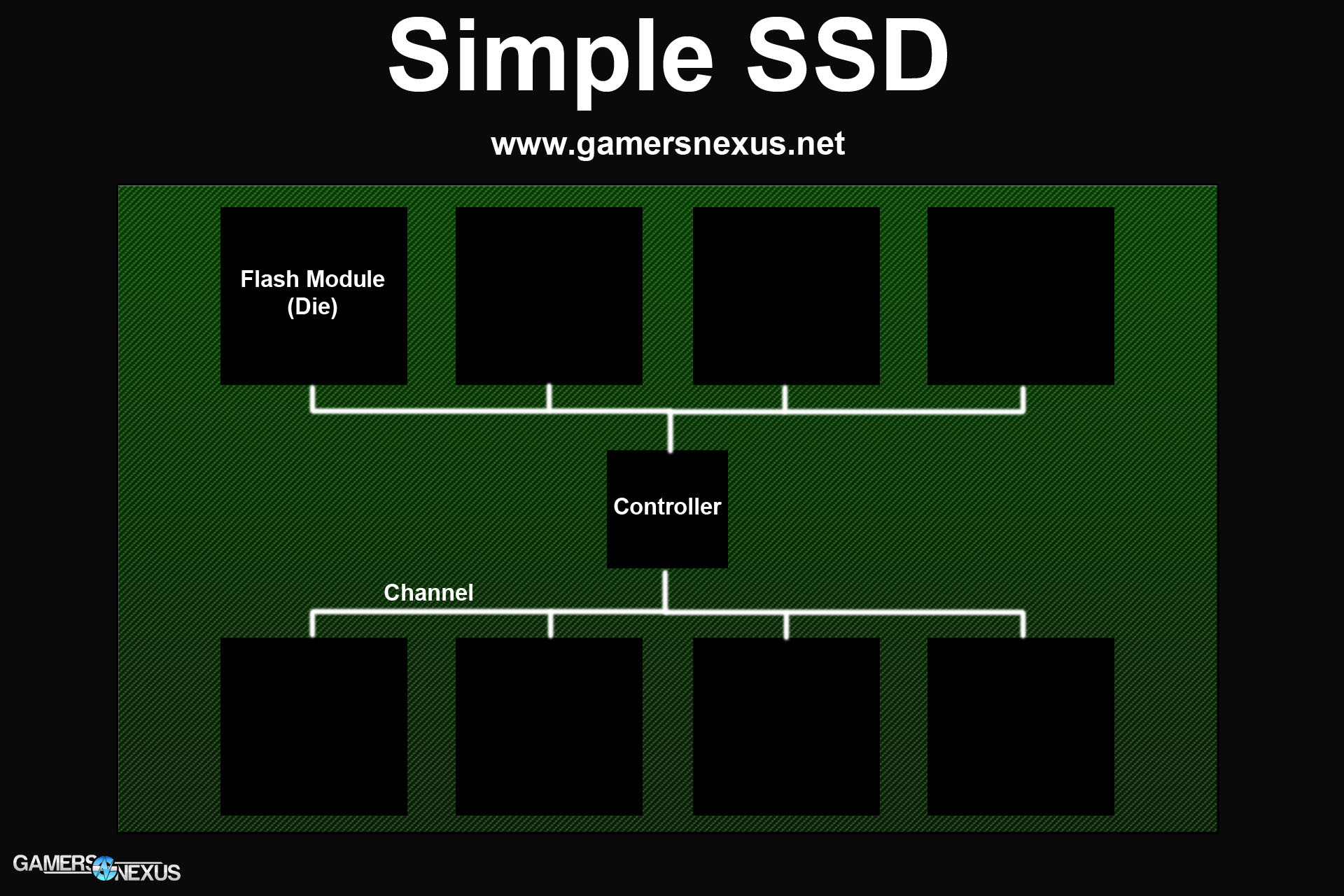 We've got a few core items in this simplified representation of a solid-state drive: The PCB (green), the Flash dies (black), and the controller (center, black). Stemming from the controller are eight channels, which effectively act as data pipes between the controller and Flash modules. Almost all modern SSDs host eight channels on the board, but not all SSDs populate those channels -- it is possible to only host six NAND dies and leave two channels unoccupied, for instance. Keep this in mind as we discuss SSD capacity and its impact on speed.

In our simple SSD above, we've got eight channels and eight flash modules. The NAND Flash modules contain your actual data and directly relate to capacity. Most SSD manufacturers -- Kingston, Crucial, Corsair included -- do not fabricate their own NAND Flash, but instead buy it from large Flash suppliers. These Flash suppliers are the very same fabrication facilities that produce DRAM modules, and include the likes of Micron (in partnership with Intel), Samsung, and Toshiba. Each fabricator has a different take on NAND Flash architecture and design, so there's no guide to be written that will give absolute, definitive rules as to the design of every NAND module made. That said, the basics remain constant throughout the consumer side of the industry; we only really start seeing significant differences in architecture once entering the Enterprise space, which is the very same space that drives innovation in new fab processes.

Before delving further into SSD architecture and capacities, let's talk about what a NAND module actually is on the inside.

A Primer on Flash Memory - What is "NAND Flash?"

NAND Flash memory can be seen as sort of an opposite of RAM (Random Access Memory), which—as you all know—is a type of fast, volatile memory used for storing data temporarily. In a gaming application, RAM is often used to store things like map data or variables within the world. Take Skyrim: We load most of the current cell's open world data and game functions into RAM to reduce the number of hits to the hard drive, which is significantly slower and would introduce noticeable load times. Every time you see a load screen in a game (or a 'lag spike' upon changing cells), it's generally a hit to the hard drive creating that downtime. In its most simplistic form, this is when the game calls for a dump of unneeded items in memory and calls for new data to be fetched from storage. RAM reduces the speed deficit of slow storage, but isn't always a viable programmatic solution -- that's why we recommend SSDs to mitigate downtime when storage must be accessed.

The word "Volatile" has special meaning as it relates to any type of electrical memory and serves as an indication of whether the device can retain its storage when power is lost. Non-volatile memory is represented in "permanent" storage -- hard drives, solid-state drives, and Flash memory ( USB, SD ) devices. Volatile memory is incredibly fast in its operations and is tied directly to the CPU and its integrated memory controller (IMC), eliminating the need to hit the physically-farther and slower storage device constantly. Volatile memory is so-named because it cannot retain the data once the unit has lost power, so it is 'wiped' and re-used regularly. A reboot will wipe all volatile memory. There are some exceptions that work around this, like RAMDisks, but those are outside of the scope for this article.

To best visualize volatility in memory, a rendering example is useful: When editing a video in software, the video editor is capable of performing a "RAM preview" before rendering out the content (writing the content to disk). In a RAM preview, the software loads all of the video data into RAM, or as much as will fit, and then accesses RAM for smooth playback without ever requiring a write or read from disk. Considering RAM hovers in the 12+ GB/s range for throughput and most HDDs are closer to 50MB/s sustained, the speed difference is enough to smoothly play high bit-rate video without lag. 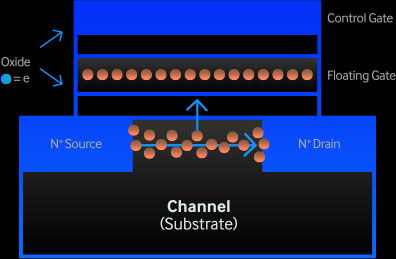 Both Flash memory and system memory (RAM) utilize NAND ("Negated AND") logic gates, which effectively control the flow of information throughout the device. These NAND gates are the reason we can write to and read from the modules. You can read in great depth about logic gates and NAND gates in the linked locations, though that's more of an electrical engineering topic and exits the top-level enthusiast scope of our website and article.

Flash memory was originally based on EEPROM, or Electrically Erasable Programmable Read-Only Memory, and has been adapted for use in modern SSDs. If you're familiar with the term "P/E cycles" -- or Program/Erase cycles -- as it pertains to SSDs, you'll already have a basic understanding of what "electrically-erasable / programmable" means. I'll define all of this below if I've lost you (quickly: P/E cycles represent the number of times data can be written to and erased from the Flash module before it is electrically depleted).

If you were to take apart your SSD and look at the components housed within the casing, you'd find a host PCB, the connectors, a controller (labeled 'SandForce,' 'Samsung,' etc.), and several black modules mounted to the PCB (normally in groupings of 2 or 4). The black modules mounted in clusters are the NAND Flash modules, which ultimately contain your data.

Continue to page 2 to learn about SSD capacity derivation, NAND architecture, channeling, and the impact on speed.