PCB mounting is the cheapest option for mounting switches, but doesn’t feel as solid as other solutions because it allows the keyboard to flex and bend. While PCB mounting is acceptable and works, it is generally used on cheap keyboards (especially non-mechanical), and we would suggest avoiding keyboards using PCB mounting unless on a tight budget.

Plastic backplate mounting is more rarely used than PCB mounting or metal backplate mounting, but its advantages make it interesting and unique. The main downside to plastic backplate mounting is that it can feel – and usually is, in my experience – slightly less solid than metal, but the difference is usually insubstantial. The advantage to plastic backplate is that it can be cheaper, lighter, and more importantly -- depending on the type of plastic -- it can help disperse backlighting more evenly. This is in contrast to metal backplates and PCBs, which reflect the light without much disbursement. This is due to the way that LEDs are mounted on Cherry and Kailh switches – excluding RGB variants – with the LED on top, which casts a shadow from the LED and the switch. This produces uneven backlighting. 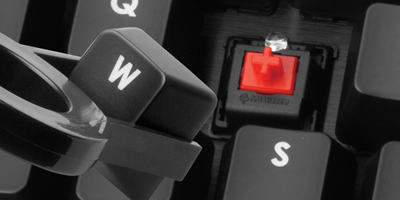 A normal cherry switch with an LED.

The use of a white, opaque, plastic backplate can help diminish the reflection of the LED and uneven lighting. The Razer Blackwidow Chroma is a good example of this. Overall, a plastic backplate is satisfactory, and has its advantages, but is rarely used.

Steel is one of the most-used metals in backplates for mechanical keyboards.

PCB, metals, and plastics all are acceptable for switch mounting in keyboards, and each have their own advantages and disadvantages. When choosing a mechanical keyboard, be sure to consider what type of mounting might work best for your uses -- but don’t let it outweigh the importance of switch choice, keycaps, and other factors.

That being said, the IBM Model M is a great example of how well a properly constructed keyboard with a metal backplate can stand up to abuse that a PCB likely couldn’t.