Save CPUs, all components manufacturing in the PC hardware industry is centered upon the same core philosophy: Design a PCB, design the aesthetics and/or heatsink, and then purchase the semiconductor or Flash supply and build a product. In the case of video cards, board partners are responsible for designing aftermarket coolers (and PCBs, if straying from reference), but purchase the GPU itself from AMD or nVidia. The “hard work” is done by the GPU engineers and fabrication plants, but that's not to trivialize the thermal engineering that board partners invest into coolers.

When our readers ask us which version of a particular video card is “best,” we have to take into account several use-case factors and objective design factors. Fully passive cooling solutions may be best for gaming HTPCs like this one, but can't be deployed for higher-TDP graphics hardware. That's where various aftermarket designs come into play, each prioritizing noise, dissipation, and flair to varying degrees.

This post seeks to assist in objectively defining the various cooling designs, including EVGA's ACX, Sapphire's Vapor-X, MSI's Frozr, Gigabyte's WindForce, & ASUS' DirectCU. We won't be directly comparing the merits of each cooler against one another in this post.

Sapphire, an AMD-exclusive board partner, manufactures branded aftermarket solutions alongside a few special video cards. The items of note are “Dual-X,” “Tri-X,” and “Vapor-X” coolers.

Dual- & Tri-X Sapphire-designed coolers generally use a reference AMD PCB with an in-house designed cooler. Some later iterations of Sapphire coolers for the current generation GPU may make alterations to the PCB for performance or value optimization, including VRM changes or memory layout changes. The original Dual-X cooler was the first GPU cooling solution to implement heatpipes of varying sizes, allowing a more even thermal distribution across the cooler's surface area. The end result is cooler and quieter operation – as is the case for most of the solutions we're discussing herein – without sacrificing too much of the price advantage afforded by AMD.

The “Dual” and “Tri” demarcation is indicative of how many fans are present on the cooler. Keep in mind that three-fan setups will be longer.

Here are examples of these cards:

Higher-end Vapor-X coolers are better still at thermal dissipation (and quieter) by using an added vapor chamber within the cooler. On the 290 and 290X Vapor-X cards, additional cooling is added in the form of a partially-exposed copper from the core of the PCB. This pulls heat from the center of the card, which Sapphire claims will drop thermals an additional ~3C. The Tri-X R9 290X and Vapor-X cards both use 10mm heatpipes, similar to the ASUS card referenced further down, and were allegedly the first in the industry to introduce heatpipes of such tremendous size to GPU coolers.

Here is an example of Vapor-X cards:

A few special models are offered by the company, primarily passive lower-end cards and SFF ITX cards. We won't get into those today.

What is EVGA's ACX?

Here are examples of ACX cards:

6-pole fans are something we've seen in Be Quiet!'s CPU coolers in the past. Most fans – GPU, case, and otherwise – host four magnetic poles (“4-pole”) that act as points of engagement as the fan makes its rotation. By adding more poles to the fan hub, spinning friction will be reduced as rotation is smoothed-out, ultimately lowering noise and improving life of the fan. If you locate an unpowered fan and slowly spin it about its axis, you'll feel little “clicks” that are magnetic in response; these clicks occur whenever you hit a pole in the fan hub, which propels the fan as it spins about the axis. In a standard case fan, you should feel four clicks in a full rotation. Higher-end fans will have six of these, which is what EVGA uses. 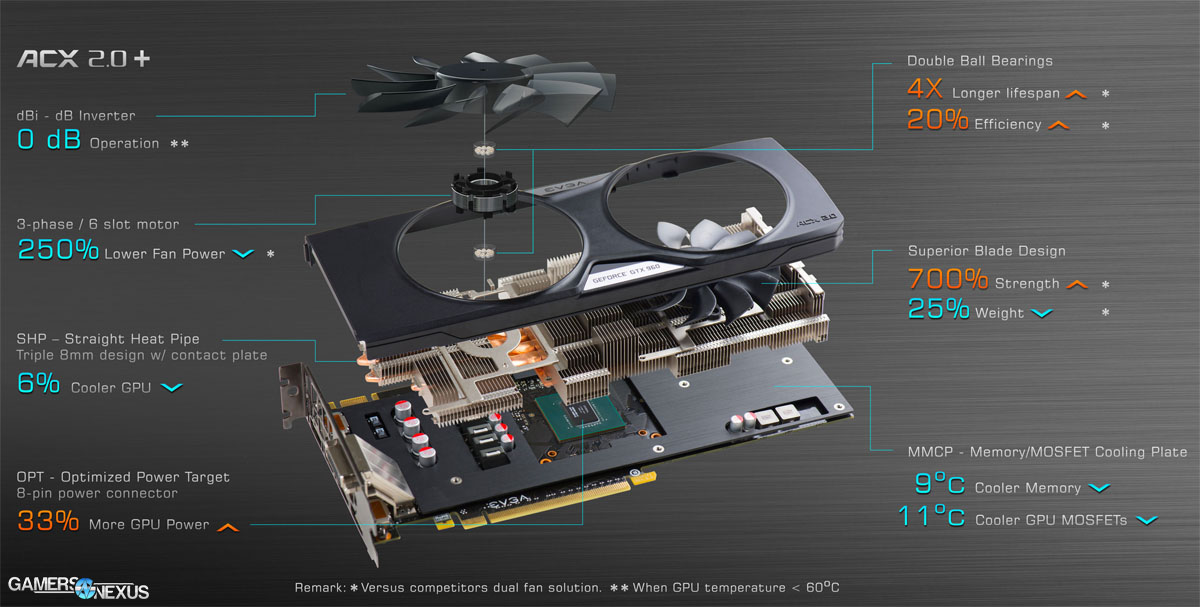 Further, double ball bearings offer substantially longer lifespan when compared to sleeve bearings and are anti-friction bearings; this means ball bearings will “squeal” less toward end of life and afford smoother spinning, whereas sleeve bearings degrade to a point of noisy operation and earlier death.

MSI is currently on its fifth generation of “Twin Frozr” coolers, a GPU heatsink and fan combination that's been built for the GTX 900 series. MSI's Twin Frozr IV is used on current-gen AMD cards and is fairly similar to Frozr V.

As with EVGA, MSI's major focus for its Frozr cooler is the fan's design. MSI uses two “Torx” fans on its heatsinks, each using fourteen fins with alternating fin design. Every other fin has a shiny, sleeker surface, used to reduce friction as the blade cuts through the air. This reduces operating noise and improves overall airflow, resulting in an approximate 19% increase in airflow over previous designs.

Unlike most cards that use 6mm heatpipes, MSI's Twin Frozr V cooler uses “Super Pipes” that are 8mm in size, each made of copper and then nickel-plated for aesthetics. The pipes are routed through the copper coldplate and the entirety of the heatsink, helping draft heat away from the VRM, memory modules, and the GPU (mounted under the coldplate).

With the newest generation of Maxwell GPUs, MSI is able to disable one of its two fans when the GPU is under minimal load. For instance, playing League of Legends will draw closer to 30W of power, allowing one of MSI's fans to disable itself (thus reducing power draw and noise). MSI's most recent version of Twin Frozr also features an LED-backlit badge, offering some visual appeal.

What is Gigabyte's WindForce Cooler?

First note that WindForce is different from the $3000 WaterForce unit, which we wrote about recently.

Gigabyte's WindForce cooler is advertised as capable of dissipating up to 600W of heat from a GPU, making WindForce one of the more powerful coolers on the market (as advertised, anyway). Although no current GPUs come anywhere close to that TDP, it does leave substantial headroom for overclocking on supported cards (Gigabyte's G1 especially).

As with the previous coolers, WindForce focuses most heavily on the fan, then makes some changes to the heatsink. Gigabyte's fan uses a curved blade with bezeled-out striping to help channel the air and reduce turbulence on intake. The aluminum fins of the heatsink are varied in height, increasing the surface area for dissipation and reducing air resistance as the fan pushes air into the sink.

Among the only companies to publicize their heatpipe design, Gigabyte opts for a composite heatpipes (sintered powder combined with grooves, something we explain here) to allow the greatest possible dissipation by the pipe. Gigabyte's cooler uses a philosophy of rapidly pushing air out of the top and sides of the video card, with a smaller percentage of the heated air being exhausted out of the rear of the case. 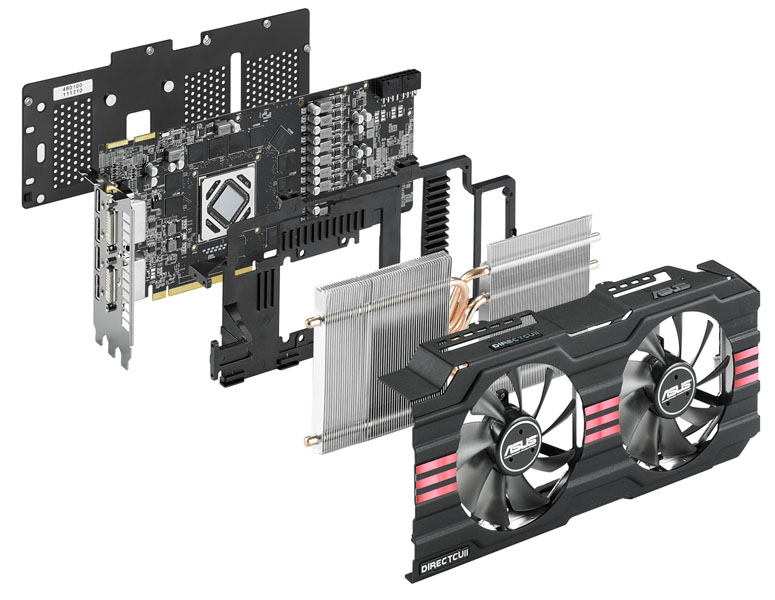 The “DirectCU” coolers have been a long-standing ASUS solution, only recently overshadowed by the new owl-like Strix models.

ASUS' DirectCU coolers are deployed on AMD & NVIDIA GPUs. The heart of the cooler sees DirectContact heatpipes touching the GPU (integrated with the coldplate, then smoothed and put in direct contact with the chip). To this end, ASUS uses perhaps overly massive 10mm heatpipes coated in an aesthetically-tuned matte black finish.

The new DirectCU II coolers use two fan types: One that's a combined blower/push fan and another that's a more standard push intake fan. The blower/push fan is mounted over the GPU, pushing high-volume airflow straight onto the chip. The secondary fan is responsible for cooling the VRM and assisting in exhausting heat from the sink. Using this fan design theoretically reduces dust build-up, though we haven't validated this claim.

Extreme OC versions of DirectCU also ship with defrost options and memory heaters for extreme overclockers performing LN2 OCs, as found in ASUS' Matrix GTX 980. The cooler itself is primarily differentiated by its hybrid fan design and 10mm heatpipes.

As for Strix, it's ASUS' branding and marketing heavy approach to a GPU heatsink solution. Strix is as many parts visual as it is cooling, with a heavy focus on the “owl” branding of equipped devices. Strix uses DirectCU II, including the nVidia-enabled 0dB fan technology explained in the MSI Frozr section above (fans spin-down when under low load). Unlike some of the more extreme OC cards, Strix units do not feature hybrid blower/flower fans and instead opt for a more standard push/flow fan.

Let us know if you'd like us to explore any other video card manufacturers' cooling solutions for future posts!